ABSTRACT: Mangifera indica is commonly found in India, which contains exalted medicinal values. TLC bioautography help us to identify the bioactivity of separated molecules in less time. In this study, leaves of Mangifera indica was subjected for various solvent extraction, followed with phytochemical screening and TLC bioautography for antioxidant and antibacterial activity. Column fractionation was done for all the extracts and subjected for spot assay. The plant chosen for this study was found to have antioxidant and antibacterial activity.

INTRODUCTION: Although modern medicine is being predominantly used in recent times, herbal based natural medicine always maintains its eminence in curing diseases 1, 2. Plants are known to possess phytochemicals which exhibit bioactivity and commonly mentioned as bioactive compounds 3. Natural derived foods or products are generally free from radiations, chemical exposure, toxic and harmful synthetics etc 4 and are thus safe, economic and highly reliable. These above characteristics pull the researchers towards it for drug discovery and development 5-9. Screening for antioxidants, antibacterials and phytochemicals can be performed using Thin layer chromatography (TLC), the assay is finest, rapid, expedience, uncomplicated and efficient method for screening10-15.

Mangifera indica grows upto 10-45m with dense foliage, typically heavy branched with stout trunk. The fruit is well known large drupe, but shows a great variation in shape and size. Mangifera indica has been proven to have the following properties - analgesic, anti-inflammatory, antioxidant, immunomodulatory, hepatoprotective, laxative, diuretic, diaphoretic, astringent, refrigerant 16-21. Mangifera indica is an evergreen tree in the anacardiaceae family. As this plant is commonly available plant and having high enriched property, the plant has been utilised in this study to screen for its antioxidant and antibacterial activity through TLC guided bioautography.

Collection and extraction of plant materials: Fresh leaves free from insect infestation and infection were collected from Sathyabama University, Chennai, Tamil Nadu, India. The collected leaves were washed in tap water followed by distilled water and shade-dried. The dried samples were powdered using a blender. A known weight of the powder was kept immersed in Acetone, Chloroform, Ethanol, Petroleum ether in the ratio of 1:10 (ie.10g of leaf powder in 100ml of solvent) for 24h. The supernatant was filtered using Whatmann filter paper. The collected filtrate is kept for evaporation of solvent. Then extract is dried. Thus, obtained extract was stored in air tight tubes at 4°C till use 22, 23.

TLC bio-autography for antioxidant activity: Chromatographed extracts were sprayed with 0.004% DPPH in 95% methanol to identify the compounds with radical scavenging activity and observed under visible light, yellow to pink colour in purple background confirmed the antioxidant molecule 28-33. The Rf value of the samples were calculated.

TLC bio-autography for antibacterial activity: The prepared chromatograms were air dried and sprayed with 24h culture of Pseudomonas aeruginosa, this was followed with incubation for 37 ºC for 24h with 100% relative humidity in the dark. After incubation, chromatograms were sprayed with 0.001% MTT in distilled water. Plates were observed for zone of inhibition due to the presence of compounds that inhibited the growth of tested organisms. The Rf value of the samples were calculated and recorded 34-38.

Column Fractionation and dot blot assay: The crude extract of plant was run in a column chromatography. The column was packed with silica gel in a glass, the mobile phase used here was ethylacetate. The sample was added to the column and ten fractions were collected. All ten fractions were subjected for spot assay for antioxidant as well as antibacterial activity following the method as prescribed earlier 31-38.

RESULTS AND DISCUSSION: Crude Mangifera indica extracts was done using solvent like Acetone, Ethanol, Chloroform, Petroleum ether with variable polarity. These extracts were then subjected to various screening procedures like Phytochemical/secondary metabolite screening, antioxidant activity and antibacterial activity. Most predominantly found phytochemicals were Carbohydrates, phenols quinones/anthraquinones, alkaloids, flavanoids and saponins. Amongst the various solvent extracts, ethanol and petroleum ether extract showed the presence of most of the secondary metabolites (Table 1).

Joona et al 39 also found the plant to possess the phytoconstituents like flavonoids, terpenoids, saponins, tannins and glycosides. Ediriweera et al 40 found steroids, flavonoids, phenolic compounds, tannins and reducing sugars, but not saponins in Mangifera zeylanica. When all the extracts were subjected for TLC and exposed to iodine it revealed the presence of more components of Mangifera indica (Fig. 1). The Rf value of all the extracts are tabulated in Table 2. Ethanol extract was not having any antioxidant molecule with it. Component with Rf value near 0.82 was observed in all the other extracts (Fig. 2) which may be due to flavonoids and terpenoids present in extract which has been already evidenced in phytochemical analysis. Joona et al 39 found methanolic leaf extract of Mangifera indica to exhibit significant antioxidant and anticancer activity because of flavonoids and terpenoids level. Dot blot assay revealed acetone and chloroform extract to have antioxidant activity whereas the fractions of other extract did not show any antioxidant activity (Fig. 3). Bhusari et al 41 isolated two pure compounds from leaves of M. indica by DPPH scavenging guided fractionation strategy. One among that was further confirmed as mangiferin by UV, IR, 1H NMR, ESI-MS and HPLC studies. The compound with Rf value around 0.98 was showing antibacterial activity in acetone, chloroform and petroleum ether extract (Fig. 4), when it was subjected for fractionation and dot blot assay only the fraction of acetone and chloroform was showing activity at 8th and 10th fraction respectively (Fig. 5). Biswas et al 42 reported antibacterial effect of mangiferin isolated from Mangifera indica. Awad El-Gied 43 found methanol and ethanol extracts of mango bulb to have antibacterial activity most bacteria especially against Mycobacterium smegmatis. Vaghasiya et al 44 also found methanol extract of M. indica seeds to have potent antibacterial activity. 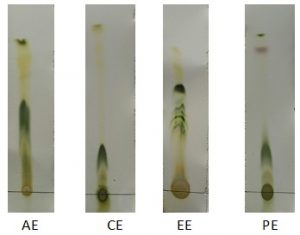 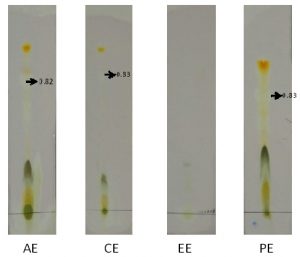 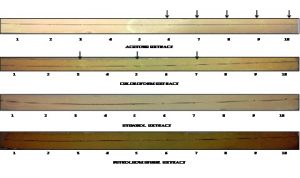 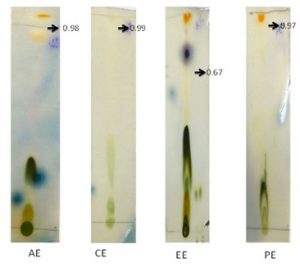 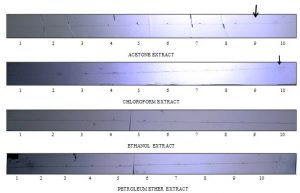 CONCLUSION: In this study, Mangifera indica was collected from Chennai. The plant is proved to have both antibacterial and antioxidant activity which has been confirmed through TLC guided identification. Even the fractions of all solvent extracts were confirmed with antioxidant and antibacterial activity. Further analysis required for the identification molecules responsible for the above bioactivities.