DETECTION OF ETHYLENE FOR IN VIRO EVALUATION OF THE UV PHOTOPROTECTION

DETECTION OF ETHYLENE FOR IN VIRO EVALUATION OF THE UV PHOTOPROTECTION

ABSTRACT: In this study, the antioxidant capacity during UV exposure has been investigated by using a laser-based trace gas detector for the detection of gaseous ethylene as an indicator for lipid peroxidation. Biocream was used as a control and ascorbic acid, butylated hydroxytoluene, phloroglucinol and hydroquinone were added as antioxidants in a mixing concentration of 2.5% (w/w). The experimental results show that there is a decrease in the number of ROS due to the presence of antioxidants, from which ascorbic acid is the most effective. The detection method offers a direct and on-line way to evaluate the capability of antioxidant in reducing the harmful effect of the UV radiation.

INTRODUCTION: In the past various in vitro and in vivo methods have been presented to evaluate the photo protection efficacy of sunscreen based on the measurement of sun protection factor (SPF), UVA/UVB ratio, and their critical wavelength 1, 2, 3, 4, 5. The determination of SPF in vivo is time consuming and expensive; in addition, the method is more suitable for testing the effect of UVB radiation due to its exclusion of UVA radiation 4, 5.

For testing the efficacy of sunscreen against UVA various in vitro and in vivo methods have been proposed, such as spectrophotometric based methods measuring the UVA absorption of sunscreens 2, 6. However, in the latter method the photochemical reaction within the sample as a result of UVA exposure is not considered.

Other research show that during the exposure of UVA on the skin, various reactive oxygen species (ROS) are generated; such as the presence of ROS using ESR (Electron Spin Resonance) 7, 8. UVA radiation stimulates the generation of ROS, which itself induces lipid peroxidation in skin tissue.

Materials: In this study Biocream (Merck, Germany) was used as a blank media. This Biocream is an ambiphilic dermatological cream and contains aerosil, parafin. liq., vaselin. album, cetostearol., sorbimacrogol. palmit. 300, monostearin., Miglycol 812, acid. sorbic., propylen-glycol., and deionized water. In this Biocream ascorbic acid, butylated hydroxytoluene (BHT), phloroglucinol and hydroquinone were mixed as antioxidant. These chemicals were of highest grade commercially available from Merck Germany, and were mixed into the Biocream in a 2.5% (w/w) concentration.

On top the cuvette was covered with a quartz window permitting UV radiation reaching the Biocream mixture. A rubber o-ring was used to between the window and the aluminum to seal the inner volume from outside air. Inlet and outlet ports allow a carrier gas to flow over the cream during UV exposure and transport the emitted ethylene to the laser-based gas detector for on-line detection. In addition the temperature of the cuvette was maintained constant, using a temperature controlled water bath 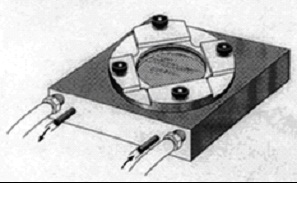 Procedure: The Biocream was smeared on a glass plate (4 cm diameter) over the area of 12.5 cm2 and put into the cuvette. Fig. 2 shows the overall experimental setup. 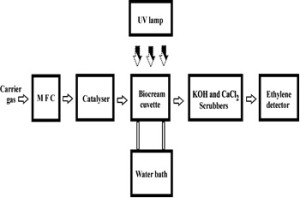 A mass flow controller (MFC) controlled the carrier gas flow rate (in our case dry air) over the sample and was kept constant at 1.8 liter/hour. The incoming air contains low concentrations of ethylene (1-10 ppbv, part per billion volume), to avoid interference with generated ethylene during our experiments this was removed from the airflow by a catalyst before entering the sampling cell together with other gaseous hydrocarbons 16, 17. CO2 and water vapor can spectroscopically interfere with the infrared absorption spectrum of ethylene at the laser lines of the laser-based ethylene detector; therefore they were removed from the airflow by KOH and CaCl2 pellets, respectively. More accurate and sensitive measurements could be performed by using these scrubbers 11, 17. Using the ethylene detector, the ethylene concentration in the outgoing gas flow was measured continuously every 5 seconds. For each experiment the ethylene measurements started 5 minutes prior to the UV illumination to obtain an ethylene baseline. The measurements continued during UV illumination (10 minutes) and till 10 minutes after exposure, to allow completely refreshment of the ventilation volume.

RESULTS: Ethylene release from the Biocream was monitored continuously using the ethylene detector.  In Fig. 3, a typical ethylene emission (nl/hour) pattern is shown under the influence of UV radiation. In this figure the black and white bar indicate when the UV lamp is turned off and on. The UVA and UVB irradiance at the position of the Biocream are (14.3 ± 0.4) mW/cm2 and (1.6 ± 0.1) mW/cm2, respectively. A fast increase in ethylene emission (in nl/h) is detected two minutes after illumination. After leveling off the emission shows a stable value. The start of the decrease in ethylene emission is also observed two minutes after turning off the UV lamp.

The ethylene emission for various amounts of Biocreams (8.2 mg, 33.1 mg and 45.8 mg) under UV illumination is shown in Fig. 4. Since the surface area over which the Biocream is smeared stays the same the figure shows the effect of the penetration depth of the UV radiation into the Biocream and the effect of ethylene diffusion out of the cream. The thickness of the Biocream can be calculated from the area, mass, and the density of Biocream, i.e. 0.871 g/ml. In this experiment the thickness is between 9 µm and 54 µm for 10 mg and 60 mg of Biocream, respectively.

Despite the diffusion effects a linear relation can be found (Fig. 5) between the ethylene production and the Biocream mass resulting in a production rate measured in nl/g. Furthermore, we observed a linear dependence of ethylene emission with the UVA and UVB intensity, by changing the distance between the lamp and the cuvette (data not shown), which indicates that there is no bleaching or saturation effects occur in the medium. 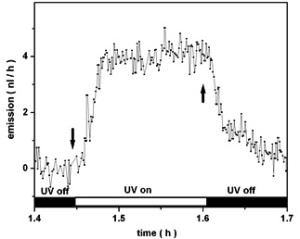 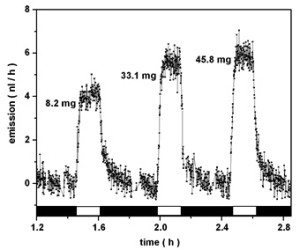 FIGURE 4: EMISSION OF ETHYLENE FROM DIFFERENT AMOUNTS OF BIOCREAM 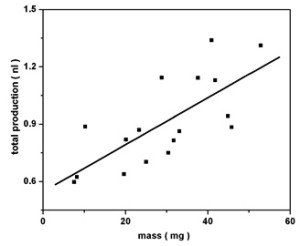 FIGURE 5: TOTAL PRODUCTION OF ETHYLENE FOR VARIOUS AMOUNTS OF BIOCREAMS

Various Biocreams mixtures with antioxidants were tested and their production rates are shown in Table 1. Table 1 shows that the highest production of ethylene comes from pure Biocream. If the Biocream contains an antioxidant it produces less ethylene, down to 25% of its original value. This indicates that antioxidants such as ascorbic acid, BHT, phloroglucinol and hydroquinone scavenge the ROS that has already been generated during UV irradiation. This effect resulted in lower concentrations of ROS and subsequently less lipid peroxidation. Ascorbic acid shows the most potent antioxidant activity.

DISCUSSION: Fig. 3 shows that about two minutes after UV illumination the Biocream emits ethylene. Subsequently also two minutes after the UV lamp is turned off, this ethylene emission diminishes to zero. This two minute delay is mainly due to the gas transport time from the cuvette to the ethylene detector. The Biocream used in this experiment contains different compounds such as paraffin and Vaseline; therefore the sample is rich of lipids. During the UV illumination period (UVA: 14.3 ± 0.4 mW/cm2 and UVB: 1.6 ± 0.1 mW/cm2) ethylene emission was detected from the sample and thus demonstrated that lipid peroxidation occurs.

Corresponding to this, it can be concluded that reactive oxygen species (ROS) are generated by UV radiation within the samples which is in agreement with previous reported results from ESR spectroscopy which detected UVA induced free radicals formation in the skin 7, 8. The total ethylene production depends on the amount of lipids (mass of the Biocream) that has been affected by ROS (Fig. 5). From this figure it can be seen that the individual experiments show some spread, which is most probably due to the non-homogeneity of the sample thickness on the glass plate. In the experiment the mass of the samples can be measured accurately, but not the variation of the thickness.

The figure shows a linear relation between the total production and the amount of lipids resulting in a production rate in nl/g.

Various Biocreams mixtures with antioxidants were tested and their production rates are shown in Table 1. It is shown that the antioxidants ascorbic acid, BHT, phloroglucinol and hydroquinone scavenge the reactive oxygen species resulting in less lipid peroxidation. Ascorbic acid shows the most potent antioxidant activity. These observations facts are in accordance with previous reported antioxidant activity of ascorbic acid, BHT, phloroglucinol and hydro-quinone. BHT and ascorbic acid have been previously used as positive control for the free radical-scavenging activities using the DPPH (1, 1-diphenyl-2-picryl hydrazyl) test. Ascorbic acid exhibited a higher activity than BHT in this test 18. The radical scavenging activity of DPPH can be expressed in an oxidation index EC50 (the effective concentration to scavenge 50%) 19. For ascorbic acid and BHT these are 0.09 mg/ml and 0.16 mg/ml, respectively.  These EC50 are smaller than for α-tocopherol. Zubia et al., 19 also found that superoxide anion radical scavenging activity of ascorbic acid is higher than BHT.

Also the antioxidant activity of hydroquinone has been investigated using DPPH test. Hydroquinone showed more potent DPPH radical-scavenging activity than arbutin (a herbal medicine) and their EC50 concentrations were 0.02 and 0.05 mM, respectively 21. Fujisawa and Kadoma 22 investigated the oxidation of α-tocopherol and hydroquinone using differential scanning calorimetry. Both compounds trapped approximately two radicals per molecule and the rate of inhibition of polymerization (chain propagation) was greater for hydroquinone than for α-tocopherol.

In contrary to these previous investigations, this study detects one of the end products of lipid peroxidation and is therefore a direct method to show the damaging effect of UV irradiation. One of the end products is ethylene which is used in our experiment as marker of the quality of antioxidant as protective compound against UV radiation.

CONCLUSION: In this investigation we have detected ethylene as the end product of lipid peroxidation. The ethylene detection has been used for indicating the presence of UV stimulated ROS in Biocream. The experimental results show that there is a decrease in the number of ROS due to the presence of antioxidants, from which ascorbic acid is the most effective. The detection method offers a direct and on-line way to evaluate of the capability of antioxidant in reducing the harmful effect of the UV radiation.

ACKNOWLEDGMENTS: The authors thank to Sacco te Lintel Hekkert for providing the ethylene detector and Cor Sikkens for his expert technical assistance. Financial support by the KNAW (The Royal Dutch Academy of Science and Art) is gratefully acknowledged.