ABSTRACT: Introduction: Human Norovirus (HuNoV) is the major cause of acute gastroenteritis in pediatric populations, accounting for approximately 18% of cases worldwide. The aim of this study was to determine the prevalence rate and characterization of genogroup in the pediatric population with gastrointestinal disease. Materials and Methods: A total of 205 fecal specimens were taken from children below 15 years of age with acute gastroenteritis disease. Samples were collected from the pediatric department of Sanjay Gandhi Post Graduate Institute of Medical Sciences, Luck now. RNA was extracted from fecal specimens and screened for Norovirus GI and GII genogroups using real-time PCR. Results: The overall rate of Norovirus infections was 23 (11.2%). Among patients positive for Norovirus, 17(74.0%) were identified as GII genogroup, and 6 (26.0%) were identified as GI genogroup. Conclusion: The majority of Norovirus associated viral gastroenteritis cases among children were attributed to GII genogroup. Younger patients were at more risk of acute gastroenteritis. As the viral transmission was evident by the oral-fecal route, the high positivity of clinical samples is indicative of disease manifestation in the area. Simultaneously, some cases are positive for Norovirus etiology suggests its circulation in the community.

INTRODUCTION: Viral gastroenteritis is an important cause of childhood morbidity and mortality worldwide, especially in developing countries 1. It is characterized by immense inflammation of the gastrointestinal tract membranes, leading to frequent vomiting and/or diarrhea. Even though acute gastroenteritis can cause severe dehydration, leading to further complications and Hospitalization 2.

Human Noroviruses (HuNoVs) are widespread and highly contagious viruses that cause major outbreaks of gastroenteritis in people of all age groups worldwide 3. The prevalence of HuNoV in children with acute gastroenteritis (AGE) is in the range of 6–48% 4.

Human Norovirus (HuNoV) belongs to the family Caliciviridae and genus Norovirus; these viruses are small non-enveloped, icosahedral viruses with approximately 38 nm diameter 5. The genome consists of a single-stranded positive-sense RNA of approximately 7.5 kb with a poly (A) tail at the 3' end of the genomes contains three open reading frames (ORFs). ORF1 is the largest and encodes a polyprotein precursor for several non-structural proteins, including NTPase proteinase and RNA dependent RNA polymerase (RdRp) 6. ORF2 encodes the capsid protein 7 and ORF3 the smallest, encodes a protein of unknown function that has been suggested to be a minor component of the virion 8.

On the basis of sequence similarity, HuNoV is composed of at least 41 genotypes, which are classified into seven recognized genogroups (GI–GVII) 9-10. Genogroups GI, GII, and GIV primarily infect humans 11. Multiple porcine norovirus belong to GII 12-14, although bovine and murine noroviruses are classified into genogroups GIII and GV, respectively 15-16. Canine noroviruses are grouped within genogroups GIV, GVI, and GVII. Each genogroup is further divided into genotypes or genoclusters on the basis of pairwise sequence comparisons 11, 17. Genogroup I contains 14 clusters, and genogroup II has 17 clusters maximum of the strains infect humans 18.

The lack of a tissue culture system for the cultivation of HuNoV has been a significant obstacle to study this group, but recent advances in cloning and sequencing of NoV have enabled their detection and genomic characterization in stool and environmental samples 18. The application of these newer assays has significantly increased the recognition of the importance of HuNoV as the cause of sporadic and outbreak-associated gastroenteritis. Sequencing and phylogenetic analysis of a highly conserved region of the capsid region and RNA-dependent RNA polymerase (RdRp) were used to detect and characterize HuNoV in clinical and environmental samples. Molecular characterization of HuNoV isolates was first performed using semi-nested RT-PCR assays 23. Nested RT-PCR tests able to amplify longer PCR products were designed for GI and GII 23-24. Real-time reverse transcription PCR (real-time RT-PCR) is currently the gold standard for sensitive and accurate detection of these viruses and serves a critical tool in outbreak prevention and control 25. Various studies in different parts of India have identified gastroenteritis is caused by HuNoV 24-27.

The aim of the present study was to determine the prevalence of HuNoV in children with gastro-enteritis in the North Indian pediatric population and their genomic characterization along with prevalence.

Sample Collection and Preparation: The present study is a cross-sectional hospital-based survey. A total of 205 fecal samples collected from clinically suspected children below 15 years age, suffering from acute gastroenteritis within 48-72 h, OPD (outpatients) and IPD (admitted patients) of the General Hospital, Sanjay Gandhi Post Graduate Institute of Medical Sciences (S.G.P.G.I.M.S.), Lucknow during 2015-2017. Maximum no. of the samples were collected in the winter season. Acute gastroenteritis is a descriptive term for inflammation of the gastrointestinal tract from any cause like toxins, viruses, bacteria, parasites, and chemicals. It commonly presents as the sudden onset of diarrhea and/or vomiting. Diarrhea is defined as more frequent (>= 3 per day) and loose stools three or more times per day. Gastrointestinal infected patients selected on the basis of the following symptom: watery diarrhea and vomiting with fever, dehydration, and abdominal cramps ("stomach ache") with the duration of illness between 24 h and less than 14 days and also recruited by written informed consent at the time of enrollment. Samples were stored at -20 ºC until use. The samples were prepared as 10% (wt/vol) suspensions of stool in phosphate-buffered saline (PBS) by mixing and centrifugation at 13000 rpm for 20 min at 4 ºC. The supernatant was used for RNA extraction.

RNA Extraction from Stool Specimens: Viral RNA was extracted from 140 μl of a 10% stool suspension with a QIAamp viral RNA kit (Qiagen,) according to the manufacturer's instructions. RNA was eluted with 50 μl of elution buffer and kept at -80 °C for further analysis.

cDNA Synthesis: Complementary DNA (cDNA) was synthesized using the superscript III (Invitrogen) kit as per manufactures instruction. Briefly, 5 μl of RNA was mixed with 1 μl of 10 mM dNTPs mix, 1 μl of 50 ng/ml random hexamer primer 3 μl RNase free water. The mixture was incubated at 65 °C for 5 min then place on ice for 1 min followed by the addition of 2 μl of 10X RT-buffer, 1 μl of 200 U/ml of Superscript III-RT, 1 μl of 40 U/ml of RNase out, 4μl of 25mM MgCl2 and 2μl of 0.1mM DTT. The reaction was incubated at 50 °C for 50 min followed by at 85 °C for 5 min to terminate the reaction and cDNA was stored at -80°C for further analysis.

Detection of Human Norovirus by Real-Time PCR: Real-time PCR was carried out in a final volume of 20 μl of a reaction mixture, containing 2 μl of cDNA, 10 μl of 2x TaqMan Universal PCR Master Mix (Applied Biosystems). Having 10 pmol of forward and reverse primer along with 5 pmol of TaqMan probe Table 1 the reaction mixture was held at 50 °C and 95 °C for 10 min followed by 45 cycles for 15 sec at 95 °C and at 60 °C for 1 min.

Statistical Analysis: The data were evaluated for statistical significance with the Chi-square test and Fisher’s exact test, where appropriate. All tests were two-tailed, and the value of p<0.05 was considered to represent a statistically significant difference.

RESULTS: During the 3 years study period, a total of 205 children below 15 years of age suffered from acute gastroenteritis (AGE) were tested for HuNoV infection. Fecal specimens were collected within 48 to 72 h of symptoms. All samples (205 fecal specimens) were evaluated with Real-time PCR diagnostic techniques. The total positivity for HuNoV in AGE patients was 23 (11.21%); among them, 6 (26%) were GI genogroup, and 17 (74%) were identified as GII genogroup.

In total HuNoV positive cases, 78.3% belonged to age group 0-5 years which have a greater risk of acute gastroenteritis. Children between 5-10 years old represented the reduced positivity (13.0%) and lowest 8.7% in 10-15 years old children presented in Fig. 1. The association between the Norovirus infection and different age groups was statistically analyzed by the chi-squared test and Fisher`s exact t-test. It was a statistically significant difference between the age groups (p<0.036*) depicted in table no.2. Among the positive cases, 10 (43.5%) were male, and 13 (56.5%) were female, and the male/female (M/F) ratio was 1:1.3. The gender distribution of norovirus-positive in AGE cases did not show any statistically significant (p>0.971) Table 2. A summary of the demographic characteristics and clinical manifestations of the patients is given in Table 2 and Table 3. 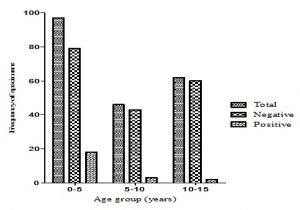 #Value of P≤0.05 was considered as significant and marked with an asterisk (*) 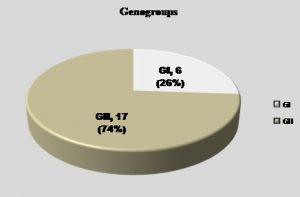 DISCUSSION: In the present research, we conducted an epidemiological study of HuNoV infection in North Indian pediatric patients under the age of 15 years, who were suffering from acute gastroenteritis during the study period (2015-2017).

HuNoV is water and food-borne pathogens related to acute gastroenteritis in children, transmitted by contaminated water and the fecal-oral route 23, 28. It is well known viral pathogen that causes sporadic and epidemic diarrhea in both children and adults, but more frequently in children, and the GII genogroup was the leading cause of the disease 27, 29.

This study demonstrated the use of RT-PCR as a reliable tool for the detection of NoV in children. In summary, NoV infections are a common cause of pediatric gastroenteritis in Northern India. To assess the role of pre-infection in protecting from the accurate rate of infection with NoV subsequent infection or illness in this community, it will be interesting to investigate asymptomatic shedding and immune responses. The majority of the studies show that GII is the foremost cause of diarrhea in humans. In our study, we were found the high percentage of GII genogroup (74%) in contrast to GI (26%) in positive Nov cases which was similar to the previous reports of South India and other regions of the world 41-44.

In the present study, 23/205 (11.21%) NoV was detected from fecal specimens in children, and a significantly higher prevalence rate was seen among less than 5 years of children, indicating an association with gastroenteritis. GII strain of Norovirus was detected 17/23 (74%) and GI as 6/23 (26%). Out of five genogroups, the GII genogroup was predominantly found in NoV positive cases. However, it is very interesting to note that the prevalence of NoV in this area is exceptionally low unlike majority of studies from India and other counties, which reports NoV as a very major diarrheagenic pathogen in both sporadic and epidemic cases 29, 43.

Our study shows that the age group between 0-5 years of children were at high risk of acute gastroenteritis in NoV positive cases. The results were similarly reported from Western India, South Africa, and Pakistan 40, 48-49. The high exposure rate of NoV in children existing in rural communities is prone to reflect their substantial exposure to enteric pathogens, possibly as a result of poor hygiene practices and sanitation. Previous studies have reported that NoV mainly peaked in the winter season, which is in concordance with our study 43. Female children were predominant in our study.

CONCLUSION: There are currently no approved Norovirus vaccines available 50-51. Challenges related to vaccine production include the inability to grow the virus in culture, limited knowledge of human norovirus immunology from antigenic diversity, and evaluation of adolescent vaccine presentation. However, the effectiveness of a commercially available NoV vaccine in the developing world would rely on factors such as the need for protection of the cold chain, costs and incorporation into an already crowded immunization system.