Typhoid fever is serious public health problem in many parts of the world.Typhoid fever, also known as enteric fever, is an illness caused by the bacterium, Salmonella typhi.  The immunology of typhoid fever in man has been the subject of a recent review. The diagnosis and subsequent treatment could reduce infection complication towards acute illness. It is difficult at present time, to diagnose typhoid fever early in its course. The immunological assay can be designed for the earlier detection. The detection of specific bacterial antigen from body fluid and serum was suggested to be an important diagnostic method in infections disease. The EIA i.e., Enzyme Immuno Assay can be carried out which is found to be very significant. The results are discussed here in relation to the concept of detection of fever in early stages.

INTRODUCTION:Typhoid Fever is an acute illness associated with fever caused by the Salmonellae typhi bacteria.  The bacteria are deposited in water or food by a human carrier, and are then spread. The fever is contracted by ingestion of the bacteria in contaminated food or water.  The bacteria can survive for weeks in water or dried sewage.

This gram-negative enteric bacillus belongs to the family Enterobacteriaceae. It is a motile, facultative anaerobe that is susceptible to various antibiotics. Currently, 107 strains of this organism have been isolated; many containing varying metabolic characteristics, levels of virulence, and multi-drug resistance genes that complicate treatment in areas that resistance is prevalent. Diagnostic identification can be attained by growth on MacConkey and EMB agars, and the bacteria is strictly non-lactose fermenting 1.

Untreated fever cases results in mortality rates ranging from 12- 30 percent. While treated cases allow for 99 percent survival. Thus, typhoid fever is a serious public problem in many parts of the world.

Diagnosis is made by blood, bone marrow or stool cultures and with the Widal test demonstration of salmonella antibodies against antigens O-somatic and H-flagellar. Although the early diagnosis and subsequent treatment could reduce infection complication towards acute illness, it is difficult at the present time to diagnose typhoid early in its course.

Serological diagnosis of typhoid fever by Widal test has been shown to be undesirable as it may show some false positive result 2. This is because antigens used in Widal Agglutination share some common epitopes with other members of Enterobacteriaceae. Although the blood culture test is specific to Salmonella typhi, the identification in culture requires a long incubation period of 2-3 days.

The detection of specific bacterial antigen from body fluid and serum is suggested to be an important diagnostic method in infections. The importance of porins as a suitable eliciting antigen for the delayed type of hypersensitivity reaction has been demonstrated 3. Either the native form or the cleaved product of porin could act as a potent mitogen for normal B cells 4.

A number of recent reports have been shown that the OMP porins play a role in pathogenesis and are important antigens against which host immune response is directed. The objective of the present research work is to develop a kit to detect typhoid fever in early stages to minimize the severity of the problem. Membrane proteins are of importance as the form channel or receptor that allows the transmission of signal and molecule across the membrane. Thus, they act as entries and doorways that regulate the interaction between two sides of the membrane. It is estimated that membrane proteins form at least 20 percent of the total proteins in prokaryotes 5. At present two types of membrane proteins are seen. Porin proteins are the bacterial outer membrane proteins. Four porin genes have been isolated and characterized Omp F, Omp C, Omp PhoE, and Omp D in S. typhi 4.

Sixteen- or eighteen-stranded beta barrel structures are common in porins, which function as transporters for ions and small molecules that cannot diffuse across a cellular membrane. Such structures appear in the outer membranes of gram-negative bacteria, chloroplasts, and mitochondria 6. Many porins of Gram-negative bacteria have properties similar to those of E. coli porins. Porins are composed ofbeta sheets these are generally linked together by beta turns on the cytoplasmic side and long loops of amino acids on the other. Porins typically control the diffusion of small metabolites like sugars, ions, and amino acids. In gram-negative bacteria the inner membrane is the major permeability barrier, and the outer membrane contains porins which render it largely permeable to molecules less than about 1500 daltons.

OmpC of S. typhi acts as a general diffusion pore. It is a trimmer having molecular weight 120 KDa. Its interest lies in the immunological aspects. The involvement of outer membrane proteins of Salmonella in eliciting cellular and humeral immunity has been demonstrated by specific name 7. The possibility of OmpC being expressed through out the infection period has also been emphasized based on its expression during high and low osmolarity conditions 5. Antiporin antibodies were detected in large quantities from typhoid patient’s sera.  OmpC of S. typhi has been cloned and sequenced by Colvas group in Mexico in 1987.It has been shown that foreign epitopes can be inserted in a loop region and also recognized by appropriate monoclonal antibody 8.Thus OmpC of S. typhi has the potential for use in diagnosis and multivalent vaccine structures are known and shares little sequence homology in the region.

MATERIALS AND METHODS: In the present work, the chemicals utilized are of Hi- media make. The microbial cultures are bought from National Chemical laboratory, Pune. The place of work is laboratory of K. K.Wagh College of Agricultural Biotechnology, Nashik. The year of experimentation is August 2011 to October 2011. 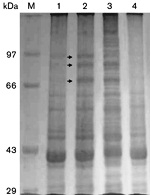 Enzyme Immuno Assay (EIA): EIA studies using OMP preparation or LPS as free antigen indicated that proteins could play an important role in the detection of antibodies in early typhoid fever detection. EIA may be useful for the diagnosis of fever since results are obtained within about five hours and in an endemic area antibodies against Salmonella typhi OMP preparations appear early in the course of the disease. Purification of antigenic components specific to S typhi must be made 9. So immunoassay or immunobloting is the most important step.

Blotting was further carried to check different typhoid positive sera with porin proteins and comparison with normal sera. This is most important step, which is based on the principle of ELISA.

For the experiment, microtitre plate is taken and small, round holes of Nitrocellulose paper were made and put carefully in the wells. Coating: - 8 wells of first row were coated with ‘Sup III’ i.e. Porin proteins of E. coli and 8 wells of second row were coated with Porin proteins from S.typhi, both proteins of concentration 15mg. The plate was incubated over night at 37 C.  Blocking is the next step, which is very important. The wells were washed with phosphate buffer saline (PBS) for several times. The wells were blocked with 20 micro liters 0f Milk phosphate buffer saline tween (MPBST) and incubated for 1and 1/2 hours.

Again plate was washed with PBS. And 5-fold dilutions of both normal and typhoid serum in various dilutions were used. First row having 8 strips were coated with E. coli porins, Four wells of first row were coated with normal serum and remaining four with typhoid positive serum. This was incubated for 1 and 1/2 hrs at 37· c. The content of first row was transferred to second row coated with S. typhi Porin proteins and again incubated. Both rows were washed with PBST and secondary antibodies conjugated with HRP diluted in MPBST were loaded in all wells. Incubated for 1 and1/2 hrs. Followed by washing. The last step was addition of substrate DAB in all wells. The ELISA plate was incubated in dark for development of colour.

First dilution i.e. 1:5 in case of typhoid positive serum in the first row coated with E.coli has given positive results but negative there after. This is because of basal level of antibodies for common antigenic epitopes. Only 2 nd row last four wells have given positive results because patient is having large no of antibodies against the immunogenic epitopes i.e. porin proteins of S. typhi.

DISCUSSION: Enteric fever continues to cause considerable morbidity and mortality in nations that have not yet achieved control of drinking water and sewage disposal. In these countries, the most frequent and serious cause of enteric fevers is S. typhi i.e. typhoid fever 10. Infection of S. typhi leads to the development of typhoid, or enteric fever. This disease is characterized by the sudden onset of a sustained and systemic fever, severe headache, nausea, and loss of appetite.

Since the antigens used in Widal Agglutination share some common epitopes with other membranes of Enterobacteriaceae. The infection of host with this organism might cause false positive result. It also would be of value to have a very specific and sensitive test for the detection of antigen in body fluids. An enzyme immunoassay (EIA) for detection of serum antibodies in patients with typhoid fever is developed using Salmonella typhi outer membrane protein (OMP) preparations as antigen.

Since, it has been demonstrated that S. typhi porins induce high titre antibodies in typhoid patients and that S. typhi porins have a protective effect in mice under challenge infection. It appears very attractive to explore their use as a diagnostic tool for typhoid fever and in the development of vaccine for humans 11.

The Porin proteins that are outer membrane proteins (OMPs) on the surface of Gram –negative bacteria have been considered as important antigens to induce host immune response. So these proteins have been exploited for diagnosis earlier. These proteins are highly immunogenic and induce protective immune response. Porins are ubiquitous proteins present in all microorganisms and their role is to allow passive diffusion of small molecules inside the cells. They share considerable homology and have been shown to have specific epitopes in exposed region.

Almost 70% of protein shows homology and 30 percent are specific for a particular organism. These unshared individual epitopes can be exploited for early diagnosis of infection.

From the result, it is clear that porins from E coli and other Gram-negative organisms can be used to block the antibodies against common epitopes of porin. After this step, the serum is left with only those antibodies, which are specifically reactive to S. typhi porins. This can be detected by dot blot, using antihuman antibody conjugated to enzyme.

The samples to be tested or analyzed should be more to confirm that the test is valid. There is scope for further development and modification of the technique for early diagnosis of typhoid fever.

CONCLUSION: When different samples collected from various pathology labs were studied by same technique, it is clear that the technique can be exploited for diagnosis of typhoid patients. The colour development in the patient’s serum indicates that he is suffering from the typhoid fever. Here results for only one sample are given. The above results depicted that the patient is severally affected with the disease as 1: 625 dilution of serum is also showing positive result.

It can be concluded by E.coli porins can block the non-specific antibodies from both the serums. And only S typhi porins can be taken for specific binding with the antibodies present in the patient’s serum. Many trails were taken to standardize the protocol and to finalize the concentration of Porin to be used. The aim of standardization of blotting technique was to minimize the steps to save time.

ACKNOWLEDGEMENT: The Authors are thankful to Dr. V.S Pawar , Principal, K.K Wagh College of Agricultural Biotechnology, Saraswati nagar, Nashik for  his continuous encouragement and giving us permission to perform work.