Punica granatum L. belongs to the family Punicaceae, which is originating from the Middle East, extending throughout the Mediterranean, eastward to China and India. Punica granatum has been used extensively as a traditional medicine in many countries for the treatment of dysentery, diarrhea, helminthiasis, acidosis, hemorrhage and respiratory pathologies. In addition, P. granatum is reported to have antioxidant, anti-atherosclerotic and antiviral properties. The dried pomegranate peels (20gms) were extracted using water (100ml) & ethanol (100 ml). The Ethanolic Extract of Punica granatum (EPG) was active against the tested bacteria. EPG demonstrated promising antibacterial activity against tested gram positive and gram negative bacteria. The E. coli and S. aureus shows more susceptibility to EPG.

INTRODUCTION: A pomegranate (Punica granatum) is a fruit-bearing deciduous shrub or small tree growing to between five and eight meters tall. The pomegranate is native to the Iranian Plateau, and has been cultivated in the Caucasus since ancient times. It is widely cultivated throughout Azerbaijan, Armenia, Iran, Afghanistan, Pakistan, Turkey, India, the drier parts of Southeast Asia, Indonesia, peninsular Malaysia, the Mediterranean and Southern Europe and tropical Africa. Introduced into Latin America and California by Spanish settlers in 1769, pomegranate is now cultivated in parts of California and Arizona for juice production 1, 2.

Meanwhile, the seeds are a rich source of total lipids, protein, crude fibers and ash representing 27.2, 13.2, 35.3 and 2.0%, respectively, and also contained 6.0% pectin and 4.7% total sugars. The iron, cupper, sodium, magnesium and zinc contents of the juice were lower than those of seeds, except potassium which was 49.2 ppm in the juice 3.

Uses in Ayurvedic Medicine: In the Indian subcontinent's ancient Ayurveda system of medicine, the pomegranate has extensively been used as a source of traditional remedies for thousands of years

The rind of the fruit and the bark of the pomegranate tree are used as a traditional remedy against diarrhea, dysentery and intestinal parasites.

The seeds and juice are considered a tonic for the heart and throat, and classified as a bitter-astringent (pitta or fire) component under the Ayurvedic system, and considered a healthful counterbalance to a diet high in sweet-fatty (kapha or earth) components 4. The astringent qualities of the flower juice, rind and tree bark are considered valuable for a variety of purposes, such as stopping nose bleeds and gum bleeds, toning skin, (after blending with mustard oil) firming-up sagging breasts and treating hemorrhoids.

Pomegranate juice (of specific fruit strains) is also used as eye drops as it is believed to slow the development of cataracts. Ayurveda differentiates between pomegranate varieties and employs them for different remedies 5.

Collection of Plant Material: The Pomegranate fruits are used for determination of the antimicrobial activity. Seeds & peels of fruit are collected, powdered & extracted by Soxlet extraction apparatus for 24 hrs.

Preparation of Extract: 20 gm of fresh peels & seeds were extracted using Soxhlet extractor with 100 ml of pure water & ethanol for 24 hrs. The extract was filtered using Whatman filter paper no. 1 and filtrate was then evaporated under reduced pressure and air dried to get semisolid residue. The extract was stored in labeled sterile screw capped bottle till further use 6, 7.

Preparations of dilutions: Six dilutions are prepared of each extracts of different concentrations. 1ml, 2ml, 3ml, 4ml, 5ml, & 6ml of extract were diluted to 10ml with distilled water

Organisms and growth conditions: Micro-organisms were obtained from the common market. Organisms were as follows: Escherichia coli (ATCC 8739) and Staphylococcus aureus (ATCC 19429).

Organisms were maintained on nutrient agar (NA). Overnight cultures were prepared by inoculating approximately 2 ml Nutrient broth (Make Hi- Media) with 2-3 colonies of each organism taken from NA. Broths were incubated overnight at 35°C with shaking. Inocula were prepared by diluting overnight cultures in saline. These suspensions were further diluted with saline as required.

Agar Well Diffusion: The principle of the agar well diffusion is the same as that of the agar disk diffusion method. A standardized inoculums culture is spread evenly on the surface of gelled agar plates. Wells of between 6 and 8 mm are aseptically punched on the agar using a sterile cork borer allowing at least 30 mm between adjacent wells and the Petri dish.

Fixed volumes of the plant extract are then introduced into the wells. The plates are then incubated at 37oC for 24 hrs for bacteria. 14 plates were prepared having 3 plates of positive control of alcohol, Choramphenicol & Streptomycin. Other 12 plates were of dilutions of water & alcoholic extracts of seeds & peels of Pomegranate fruit 8.

Determination of Minimum Inhibitory Concentration (MIC): Since agar disc diffusion assay is a qualitative method used in antimicrobial testing, the determination of MIC was done to obtain quantitative results on the antibacterial effects of the plant extracts. The method used to determine the MIC was the agar dilution method. 25 microliters of each of the extract dilutions was individually added to the wells prepared in NA plates for bacteria giving final concentrations.

Test microorganism culture was spotted on the surface of the solidified agar plates. The plates were inoculated by starting from the lowest concentration up to the highest concentration. Controls (agar without extract) were also inoculated at the start and at the end of the dilutions.

After inoculation, plates were allowed to dry for 30 min. Plates were incubated at 37 ± 1oC for 48 hr for bacteria. The lowest concentration which showed no visible growth of the microorganism was considered as the MIC for the extract 9. 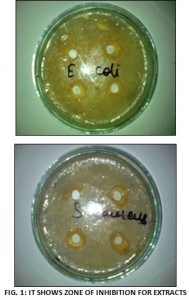 FIG. 1: IT SHOWS ZONE OF INHIBITION FOR EXTRACTS 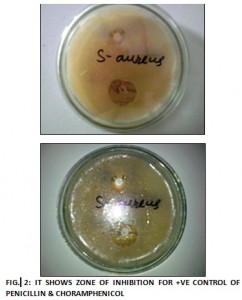 FIG. 2: IT SHOWS ZONE OF INHIBITION FOR +VE CONTROL OF PENICILLIN & CHORAMPHENICOL

CONCLUSION: Pomegranate fruit peels extract have great potential as antimicrobial compounds against microorganisms. Thus, it can be used in the treatment of infectious diseases caused by resistant microbes.

The synergistic effect from the association of antibiotic with fruit extract against resistant bacteria leads to new choices for the treatment of infectious diseases. This effect enables the use of the respective antibiotic when it is no longer effective by itself during therapeutic treatment.