Srinivasa Reddy 1 and B. Hari Babu *2

ABSTRACT: A simple, sensitive, highly accurate method has been developed for the determination of Lafutidine in bulk sample and dosage forms. This method is based on the oxidative coupling reaction of drug with 3-methyl-2-benzothialinone hydrazine hydrochloride (MBTH) reagent in the presence of ferric chloride to form green colored chromogen exhibiting maximum absorption at 630 nm. Beer’s law was obeyed and quantitative results were obtained in the range of 1-18µg/mL. The results of the analysis for the methods have been validated statistically.

INTRODUCTION: Lafutidine, a newly developed histamine H(2)-receptor antagonist, inhibits gastric acid secretion. It is currently marketed in Japan, China and India. It is not only suppresses gastric acid secretion, but also possesses cytoprotective properties. After oral administration, Lafutidine is quickly absorbed in the GIT. The plasma protein binding ability of Lafutidine is 88%. The drug is predominantly metabolized via CYP2D6 and CYP3A4 enzymes.

It decreases inflammation by modulating calcitonin gene-related peptide and vanilloid receptors. It is also found to stimulate mucin biosynthesis and promote the restitution of damaged mucosa. Lafutidine is mostly excreted in urine as drug metabolites and as unchanged drug, to some extent 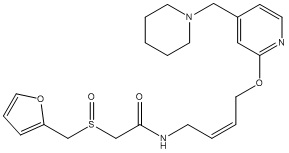 Lafutidine is a white to pale yellow crystalline powder. It is freely soluble in methanol, whereas it is practically insoluble in water. But Lafutidine is soluble and stable 1 in acidic medium. A survey on literature revealed that few UV-Spectrophotometric 2-7, Spectrofluorimetric 8, High performance liquid chromatographic 9-18 and other 19 methods were available for the estimation of the titled drug. However, according to the knowledge of the author no visible spectrophotometric method was reported so far. So, in the present investigation it was aimed to develop a novel visible spectrophotometric method with good accuracy, simplicity, precision and economically viable for the determination of Lafutidine in bulk and tablet dosage forms.

All the chemicals and reagents used were of analytical grade and only freshly prepared solutions were used in the present work.

Prepared by dissolving 0.2 g of MBTH in 100 mL distilled water.

100 mg of Lafutidine was accurately weighed and transferred into a standard100mL volumetric flask and dissolved in 25mL of 0.1N Hydrochloric acid by shaking manually for 2 min. The volume was made up to the mark with the same solution. The concentration of the solution is 1000 µg.mL-1.

10 mL of standard stock solution was transferred into another 100 mL volumetric flask and made it up to the mark with 0.1N Hydrochloric acid to get 100 μg.mL-1 solution.

Aliquots of working standard of Lafutidine solution (0.3,0.6,0.9,1.2,1.5 and 1.8mL) were added to a series of 10mL volumetric flasks. After that 2.0 mL of 0.2% MBTH solution followed by 1.0ml of 0.7% FeCl3 were added to each flask and kept aside for 30 min. The volume was made upto the mark with distilled water. The absorbance was measured at 630nm against similar reagent blank. The amount of Lafutidine was determined from the calibration curve (Fig.3).

Procedure for the Assay of Lafutidine in Pharmaceutical Dosage Forms:

Twenty tablets were weighed accurately and reduced to fine powder, Out of which drug equivalent to 100 mg of Lafutidine taken in a 100ml volumetric flask and dissolved in 25mL of 0.1N Hydrochloric acid by shaking manually for 2 min. The  volume  was  made  up  with  the same solution  up  to  the  mark, filtered by  using  Whattmann-42 filter paper. The filtrate was quantitatively diluted with 0.1N Hydrochloric acid to produce concentrations in the linear range of the assay of Lafutidin

The proposed method for the determination of Lafutidine through Oxidative Coupling Reaction in Bulk Sample and Dosage Forms was found to be accurate, simple and rapid. Lafutidine possesses different functional groups such as secondary amine, ketone and ether of varied reactivity. The method is based on the oxidative coupling reaction with MBTH in the presence of FeCl3. Under  the  reaction  conditions, MBTH  loses  two  electrons  and  one  proton  on oxidation,  forming  the  electrophilic  intermediate which  can be substituted on Lafutidine to form a green coloured product. Probable mechanism of the reaction was given in the scheme (Fig 2). 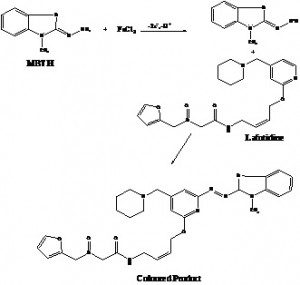 FIG.2: MECHANISM OF THE REACTION

It was noticed that a minimum of 25 minutes required for maximum colour development (Fig.3). It was also observed that the colour is stable for more than 5 hours. 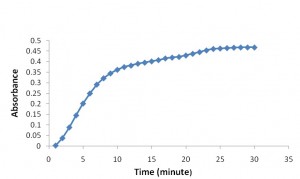 FIG.3: TIME SCAN: PROGRESS OF REACTION OF LAFUTIDINE WITH MBTH-FeCl3

Colour development of drug with reagents (MBTH &FeCl3) was carried out in acidic, basic and neutral media. But it was found that neutral medium has more absorbance compared to the other two shown in Table 1.

Different orders of additions were carried with Drug, MBTH and FeCl3. But, not much variation in absorbance was observed. It was found that the order of addition of Drug, MBTH and FeCl3 gave good results. Colour development experiment was carried out by changing the concentration of FeCl3 from 0.5mL to 2.5mL. It was found that 1.0mL of FeCl3 is optimum concentration shown in Table 2.

Colour development experiment was carried out by changing the concentration of MBTH from 0.5mL to 2.5mL. It was found that 2.0mL of MBTH is optimum concentration shown in Table 3.

The absorption spectra of Lafutidine drug with 3-methyl-2-benzothialinonehydrazone hydrochloride (MBTH) in the presence of Ferric Chloride to form colored chromogen exhibiting maximum absorption at 630 nm. The reagent blank exhibited negligible absorbance despite having the same wavelength in the same region. The maximum absorption, progress of reaction of lafutidine and Beer’s law validity were shown in Fig. 4-6. 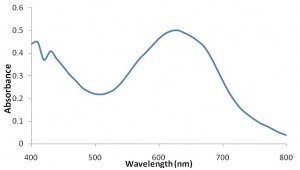 The analytical parameters obtained with the optimization experiments were given in Table 4. 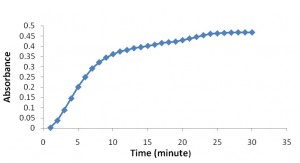 FIG.5: TIME SCAN: PROGRESS OF REACTION OF LAFUTIDINE WITH MBTH-FeCl3 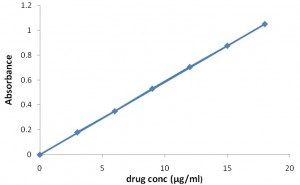 CONCLUSION: The proposed method was found to be simple, selective and sensitive. The statistical parameters clearly indicate the reproducibility and accuracy of the methods. Analysis of the authentic samples containing Lafutidine showed no interference from the common excipients. Hence, the method could be considered for the determination of Lafutidine in the quality control laboratories.