ABSTRACT :A simple and sensitive spectrophotometric method was developed for the determination of prilocaine HCl in pharmaceutical preparation and human plasma.  The quantitative analysis of prilocaine HCl was carried out using of wavelength at 230 nm. The method was linear in concentration range of 3-15 μg/mL for standard solution and 4-15 μg/mL for human plasma. Linearity was determined by calculating correlation coefficient. These values were found as  a 0.9999 and 0.9967 in standard solution and human plasma, respectively. Developed spectrophotometric method was found suitable in terms of accuracy, sensitivity, precision, reproducibility. In addition to these, this method could be easily and directly applied to both human plasma and pharmaceutical preparation.

INTRODUCTION:The reason of using local anesthetics is to block the conduction of impulses in nerve fibers which cause anesthesia. They are most commonly used in dentistry and minor surgery in order to provide temporary relief of pain. There are two application types of local anesthetics which are topical and parenteral applications that reversibly block the nerve conductances.

Overdose of local anesthetics are toxic, causing cardiovascular and central-nervous disorders, and because of that reason therapeutic blood-plasma/serum concentrations should be kept in a certain concentration range.

Similar to many other drugs, local anesthetics bind to plasma proteins to some extent. α1-acid glycoprotein and albumin 1-2. Prilocaine HCl, 2-propilamino-N-o-tolil-propiyonamit hydrochloride, is a drug.  The chemical structure of prilocaine HCl is shown in Figure 1.

Prilocaine is metobolyzed in liver. Prilocaine is hydrolyzed to hydrolyse to o-toluidine (OT) and N-propylalanine by the help of amidases enzymes. The main reason of methaemoglobinemiais taking over-dose of prilocaine (exceeding 600 mg in adults or 8 mg kg-1 in children)  which increases the concentration of o-toluidine 3-5. In newborn infants, this enzyme, methaemoglobin, is not complete its development. Therefore, determination  of prilocaine is clinically important for those patients. In these patients, less vasodilatation is  clinically observed which is similar to other amide local anesthetics in terms of relative freedom from allergic reactions. For cardiac patients, It received short procedures which is  administered in a plain solution 6.

There are many advantages of using modern methods of analysis (HPLC, GC, Mass) for drug assay which are their simplicity, speed, good specificity, excellent precision and accuracy. However, they involve complex equipments, which could not be available in most of the  laboratories. Therefore, the aim of the present work is to develop a simple, sensitive and accurate spectrophotometric method for the determination of prilocaine HCl in pharmaceutical formulations and human plasma. The developed method was validated according to International Conference on Harmonization guidelines 22.

Chemicals and reagents: Prilocaine HCl reference standard was kindly supplied from Novagenix Company (Ankara, Turkey ). The purity of prilocaine HCl was tested by checking its melting point, UV, H NMR, C NMR, infrared spectra no impurities were found. The plasma samples were obtained from Atatürk University-Arastirma Hosbital in Erzurum, Turkey. Methanol and all other reagents were obtained from Merck (Germany). Citanest flacone was provided from the pharmacy (Erzurum, Turkey).

Instrumentation: Thermospectronic double beam UV–Vis spectrophotometer (HEλIOSβ, Thermospectronic, Cambridge, UK) with Vision 32 Softwarewas used.All of the measurements was made in 1-cm quartz cells at a scan speed of 600 nm min–1 and scan range of 215–275 nm, fixed slit width of 2 nm.

Wavelength Selection: Scanning of standard solutions of prilocaine HCl (10 μg/mL) was achieved in the region of 200 nm to 400 nm against solvent blank using SCAN mode by UV/Visible spectrophotometer to get normal (zero order) spectrum.

Preparation of the Standard and Quality Control Solutions: An accurately weighed quantity of prilocaine HCl (10 mg) was transferred into 100 ml volumetric flask. 50 ml of methanol was added and the mixture was sonicated for 5 min. Volume was made up with methanol to obtain 100 μg/ml of stock solution. The stock standard solution of prilocaine HCl was prepared and stored at -20oC under refrigeration. The six standard solutions (3, 5, 8, 10, 12, 15 μg/mL) in methanol were prepared by doing required dilutions from stock solution. Three quality control (QC) samples at the concentrations of 5, 8 and 10 μg/mL were prepared from the stock standard solution.

Procedure for Pharmaceutical Preparation: Stock solution (100 mg/mL) is prepared with methanol from citanest flakon that contains 20 mg/mL prilocaine HCl. All required dilutions are made with methanol which is in the working range of spectrophotometer.

Preparation of Plasma Standard and Quality Control Solutions: Different concentrations of prilocaine HCl were spiked to plasma (0.5 mL) in order to make final concentrations between 4 and 15 μg/mL (4, 6, 8, 10, 12, 15 μg/mL)  andQC samples at three different levels (5, 8, 12 µg/mL). Then, 1 mL of 1 M NaOH was added and vortexed for 30 s. The samples were extracted with 5 ml of diethylether and mixed for 2 min. The organic layer was separated after centrifugation at 4000×g for 8 min. The separated organic layer was evaporated to dryness at room temperature under nitrogen gas. The residue was reconstituted in 5 ml of methanol and vortex-mixed for 30 s.

Precision and Accuracy: The precision was determined by the ratio of the standard deviation to the mean (percent relative standard deviation, RSD %) both standard solutions and plasma samples. The values were calculated for both standard solutions and plasma samples with percent relative error (RE%). The intra-day and inter-day values for accuracy and precision were determined by replicate analysis of six sets of samples with three different concentrations of prilocaine HCl (5, 8 and 10 µg/mL) for standard solution and   plasma (6, 8 and 10 µg/mL) within 1 day or on 5 consecutive days (Table 2).

Specificity and Selectivity: No interference was observed coming from standard, plasma and excipients (methyl parahydroxybenzoate, sodium chloride) of pharmaceutical preparation at 230 nm. The spectrums of the prilocaine HCl in standard solutions and human plasma are shown in Figure 2 and 3. 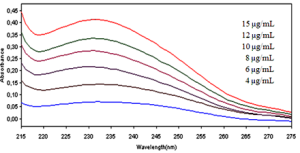 Recovery: Analytical recovery is calculated as follows first of all, known amount of pure drugs are added to pre-analyzed samples of commercial dosage forms. Then recovery of plasma samples were determined by comparing spiked human plasma data with standard prilocaine HCl solutions at the same concentration levels in order to measure analytical recovery value.

CONCLUSIONS: Spectrophotometry method is widely used with respect to GC, HPLC and mass spectrometry procedures 6-20, in terms of   its simplicity and cheapness.  The reagent that was used in this method could be available in many analytical laboratories. Another advantage of this method is short analysis time. Therefore, this paper describes a new, simple and sensitive spectrophotometric method for the determination of prilocaine HCl both pharmaceutical preparation and human plasma. The liquid-liquid extraction method used in human plasma has been simplicity used and also successfully applied to GC-MS, GC-NPD method 17, 18. The method was validated by using sensitivity, specificity, linearity, accuracy and precision according to ICH 22. The analytical method is can be utilized for the routine analysis and clinical laboratories.