DETERMINATION OF RIZATRIPTAN IN BULK AND ITS TABLET DOSAGE FORMS BY UV SPECTROSCOPIC METHOD.

DETERMINATION OF RIZATRIPTAN IN BULK AND ITS TABLET DOSAGE FORMS BY UV SPECTROSCOPIC METHOD.

Rizatriptan is a selective 5-HT1B/1D agonist which is used in the treatment of migraine headaches. Zero order spectroscopic method has been developed for the determination of rizatriptan. Rizatriptan in its 0.1 N HCl solutions was determined at the wavelength ranges of 220–400 nm by the spectroscopic method. Rizatriptan showed an absorption peak at 226 nm. Linearity ranges were found as 1-5 µg/ml. for the zero order UV spectroscopic method. Limit of quantitation was determined as 0.0944 µg/ml whereas limit of detection was calculated as 0.0311 µg/ml for the same measurements, respectively. No interference was found from tablet excipients at the selected wavelengths and assay conditions. Developed method was found to be validated and showed good precision and reproducibility. Proposed method was successfully applied to the assay of rizatriptan in pure and tablet dosage forms and assessed as to be rapid, sensitive, accurate and relatively inexpensive.

In the present study simple, accurate and precise spectroscopic methods have been developed for the estimation of Rizatriptan benzoate in bulk as well as in pharmaceutical formulations.

Selection of Analytical Wavelength: Appropriate dilutions were prepared for drug from the standard stock solution and the solutions were scanned in the wavelength range of 220-400 nm. The absorption Spectra thus obtained was derivatized for Zero order. This Zero order Spectrum was selected for the analysis of the drugs.

Selection of Analytical Concentration Ranges: From the standard stock solution of Rizatriptan benzoate, appropriate aliquots were pipetted out in to 10 ml volumetric flasks and dilutions were made with 0.1 N HCl to obtain working standard solutions of concentrations from  1 - 5 mg / ml. Absorbance for these solutions were measured at 226 nm. For the standard solution analytical concentration range was found to be 1 - 5 µg / ml and those values were reported in Table 1.

Calibration curve for the Rizatriptan benzoate (1-5 µg/ml): Appropriate volume of aliquots from standard Rizatriptan benzoate stock solutions were transferred to different volumetric flasks of 10 ml capacity. The volume was adjusted to the mark with 0.1 N HCl to obtain concentrations of   1, 2, 3, 4 and 5µg / ml. Absorbance spectra of each solution against 0.1 N HCl as blank were measured at 226 nm and the graphs of Zero order overlain Spectra in Fig. 2. The Regression equation and Correlation coefficient (r2) were determined and presented in Table 2.

Linearity and Range: The linearity of analytical method is its ability to elicit test results that are directly proportional to the concentration of analyte in sample within a given range and was given in Fig. 3. The range of analytical method is the interval between the upper and lower levels of analyte that have been demonstrated to be determined within a suitable level of Precision, Accuracy and Linearity. The optical characteristics were summarized in Table 2.

Accuracy: Accuracy is the closeness of the test results obtained by the method to the true value. To study the Accuracy, twenty tablets of each formulation were weighed and powdered and analysis of the same was carried out. Recovery studies were carried out by adding known amount of standard addition method (50, 100 and 150%) to the sample solution. % Recovery was calculated and reported in Table 3.

Precision: The Precision of an analytical  method is  the degree of agreement  among individual test  results,  when   the   method  is  applied  repeatedly  to   multiple  samplings of homogenous samples. It provides an indication of random error results and was expressed as % relative standard deviation (% RSD).

Ruggedness: The solutions were prepared and analyzed with change in the analytical conditions like different laboratory conditions and different analyst and reported in Table 5.

Linearity and range: Rizatriptan benzoate exhibits its maximum absorption at 226 nm and obeyed Beer's law in the range of 1-5 µg/ml. Linear regression of absorbance Vs concentration yielded equation y=0.122x+0.0117 with a correlation coefficient of 0.996. The results are summarized in Table 1. 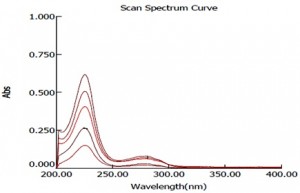 *Y= m X + c where X is the concentration of Rizatriptan benzoate in µg/ml and Y is the Absorbance at the respective lmax.

Accuracy: In order to ascertain the suitability and reproducibility of the proposed method, recovery studies were carried out by adding known quantities of standard Rizatriptan benzoate (50,100,150%) to the tablet and the mixtures were analyzed by the proposed method. The percentage recovery of Rizatriptan benzoate was found to be 99.004-100.5 % (Table 3) indicating that there is no interference by the excipients in the method.

* is average of 6 determinations

Ruggedness: In the ruggedness study, % recovery of Rizatriptan benzoate in bulk drugs samples was found to be 100.05 by analyst-1 and 99.8 by analyst-2 respectively (Table 5).

ACKNOWLEDGEMENTS: We are thankful to Apotex Research Pvt. Ltd. Bangalore (India) for providing us gift sample of Rizatriptan benzoate.