DETERMINATION OF THE CONCENTRATION BLENDS OF SUPERDISINTEGRANT FOR FAST DISINTEGRATING TABLETS

DETERMINATION OF THE CONCENTRATION BLENDS OF SUPERDISINTEGRANT FOR FAST DISINTEGRATING TABLETS

In this research work, different blends of superdisintegrants with different ratio in fixed concentration were taken and placebo tablets were formulated and evaluated with a view to optimize a formula and concentration blends of superdisintegrants for Fast Disintegrating Tablets (FDT). In this research work three superdisintegrants, viz. Crosscarmellose, Crospovidone and Sodium Starch Glycolate were used in different ratio (1:1, 1:2, 2:1) in fixed concentration of 4% w/w in combination in each batch. Six blends were prepared and 3 batches of tablets of each formulation code blend were formulated and evaluated for pre-compression parameters like Compressibility, Hausner’s ratio, Bulk density, Tapped density and post-compression parameters like Hardness, Weight variation, Disintegration time, Dispersion time, Friability, Wetting time, Water absorption ratio. Based on results it revealed that the formulation code blend A3 which had Croscarmellose, Crosspovidone in ratio 1:2 (4%w/w) emerged as best blend of superdisintegrants for FDT formulation. To optimize the formula of A3 blend, Paracetamol FDT was formulated and evaluated using the concentration blend of A3; three batches were formulated and evaluated for all above parameters and in-vitro drug release (pH5.8 phosphate buffer) and disintegration time was found between 23-27 seconds and release was more than 80% in 30 minute. We can conclude that a good FDT can be formulated using the above A3 blend concentration.

INTRODUCTION: Oral route of administration still enjoys, as most preferred route because of its numerous advantages. The most popular oral dosage forms are tablets and capsules. However, one important drawback of these dosage forms is the need to swallow. Many patients express difficulty in swallowing tablets and hard gelatin capsules, resulting in non-compliance and ineffective therapy 1.

Advantages of this drug delivery system include convenience of administration and accurate dosing as compared to liquids, easy portability, ability to provide advantages of liquid medication in the form of solid preparation, ideal for pediatric and geriatric patients and rapid dissolution/absorption of the drug, which may produce rapid onset of action. Some drugs are absorbed from mouth, pharynx and esophagus as the saliva passes down into the stomach and in such cases bioavailability of the drug is increased: pre-gastric absorption can result in improved bioavailability and as result of reduced dosage, improved clinical performance through a reduction of unwanted effects.

The need for delivering drugs to patients efficiently and with few side effects has prompted pharmaceutical companies to engage in the development of new drug delivery system. A solid dosage form that dissolves Oral disintegrates/Fast disintegrating tablets, rapidly in oral cavity, resulting in solution or suspension without the need of water is known as fast dissolving dosage form or mouth dissolving tablets 5. When this type of tablet is placed into the mouth, the saliva will serve to rapidly dissolve the tablet. They are also known as oro-dissolving, rapid – dissolve orodispersible, melt in mouth, rapimelt, quick dissolving, fast melts and porous tablets.

Conventional oral dosage forms like tablets, capsules, oral suspension, syrups etc. are available in market but the major drawbacks with these are many patients find it difficult to swallow (Dysphagia) tablets and hard gelatin capsules. The difficulty experienced in particular by pediatrics and geriatrics patients [6]. Other groups that may experience problems include the mentally ill, developmentally disable and patients who are uncooperative and hence do not take their medicines as prescribed leading to patient noncompliance.

The tablets were formulated by direct compression using 11.1mm tablet punch on Karnawati, Rimek, Minipress II. 3 batches of 30 tablets of each blend i.e. 27 batches were formulated and evaluated.

After optimizing the blend having the best results by selecting that blend Paracetamol FDT was formulated for proving the ruggedness of formula, 3 batches were formulated and evaluated for the above same parameters in addition to that in-vitro drug release and drug content uniformity was evaluated.

Weight variation: The procedure described in United State Pharmacopoeia (USP-30) was employed to determine the weight variation of the tablets. Twenty tablets were randomly selected from each batch and weighed on an electronic balance and mean weight was taken. Each tablet was then weighed individually and standard deviation in weight was calculated for each batch 15.

Hardness: Five tablets were randomly selected from each batch and hardness of tablets was determined by using Monsanto hardness tester. The mean values and standard deviation for each batch were calculated 16-18.

Friability: Friability indicates the ability of a tablet to withstand mechanical shocks while handling. Friability of the tablets were determined using Roche Friabilator and is expressed in percentage (%). Ten tablets were initially weighed (Winitial) and placed into the friabilator. The friabilator was operated at 25 rpm for 4 minutes or run up to 100 revolutions and then the tablets were weight again (Wfinal). The loss in tablet weight due to abrasion or fracture was the measure of tablet friability. Percent friability (f) was calculated by using the following formula 19;

% friability of less than 1 % is considered acceptable.

Acceptance Limits: Paracetamol tablets contain not less than 90.0% and not more than 110.0% of labeled amount of paracetamol 20.

Wetting Time: The wetting time and capillarity of the oral dispersible tablets were measured by a conventional method. The tablet was placed in a petridish of 6.5 cm diameter containing 10 ml water at room temperature and the times for complete wetting of tablets were recorded 16.

Water Absorption Ratio: A piece of tissue paper folded twice was placed in a small petridish containing 6ml of distilled water. A tablet was put on the paper and the time required for complete wetting of the tablet was measured. The wetting tablet was then weighed. Water absorption ratio “R” was determined using the equation as follows 17:

In-vitro Drug Release Studies: The in-vitro drug release studies of Paracetamol from tablets were carried out using USP dissolution test apparatus type-II (Paddle type), using 900 ml of phosphate buffer (PH 5.8) as the medium and rotating the paddle at 50 rpm for 30 minutes at 37 ± 0.5oC. In this test 8 tablets from each batch was used for the studies. At specified time i.e. 0, 5, 10, 15, 20, 25, 30 minutes withdrawn a suitable volume of the sample and filter promptly through a membrane filter disc with an average pore diameter not greater than 1.0 mm.

The absorbance of the resulting solution was measured at the maximum 243 nm 21.

RESULTS AND DISCUSSION: The Placebo tablets of all 27 batches were evaluated for the post compression parameters for optimizing the blend for formulation fast disintegrating tablets. A3 blend had shown the best results the disintegration time was 22 seconds, hardness was good, friability, weight variation was well within the acceptance criteria, So this blend A3 which had Croscarmellose, Crospovidone at 4% w/w in 1:2 ratio was consider as the best concentration blend for the formulation of superdisintegrants.

From the data of Table 3, it was concluded  that A3 blend concentration was best among all the tablets of which had shown hardness 4.5Kg/cm2, friability of 0.86% and weight variation is less than 5% which is well within the acceptance criteria given by USP-30, dispersion time was 22 seconds, wetting time was 42 seconds. So, it was considered as optimized blend of superdisintegrants and Paracetamol tablets were formulated and evaluated by using same formula and method. Three batches of Paracetamol FDT were evaluated.

The compatibility studies for Paracetamol and other excipients were done at three different conditions 40°c / 75% RH, 25°C / 60% RH, 55°c for 15 days, visual evaluation was done no significant changes were observed and IR studies were also done data shown in Fig. 1-7. 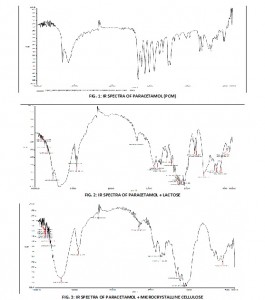 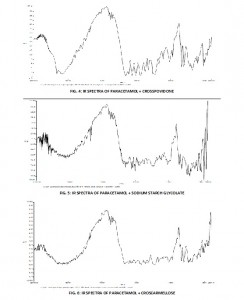 N=3,*represents the value as mean ± SD

Fig. 8 is the calibration curve for Paracetamol tablets; Fig. 9, 10 shows the % drug release and its comparison. 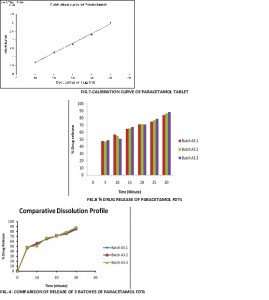 ACKNOWLEDGEMENT: The Authors are thankful and grateful to School of Pharmacy and Technology Management, NMIMS Shirpur Campus, for providing all the necessary facilities during this research work.