Spectrophotometric method has been developed for the determination of Tolterodine tartrate (TOL) which is based on formation of a binary complex between TOL and eosin at 545 nm using acetate buffer at pH 3.8.The absorbance-concentration plot is rectilinear over the range (1-10μg/ml) with LOD of 0.1μg/ml and LOQ of 0.31μg/ml. The proposed method was successfully applied to the analysis of commercial tablets containing the drug and the results were in good agreement with those obtained with the reference method. The method was also utilized to investigate the kinetics of alkaline, acid and oxidative degradation of the drug .It was found to be stable upon acidic and alkaline degradation and only undergo oxidative degradation using 33.3%H2O2. The apparent first order rate constant and t1/2 of the oxidative degradation reaction were calculated.

INTRODUCTION: Tolterodine tartrate 2-[(1R)-3-[Bis(1-methylethyl)amino]-1-phenylpropyl]-4-methylphenol (Fig. 1) 1 is a tertiary anti-muscarinic with actions similar to those of atropine. It is used in the management of urinary frequency, urgency, and incontinence in detrusor instability 2.

The few analytical methods published for its determination include use of UV detection for quantification of enantiomers of tolterodine using chiral LC 3, also there is a few spectrophotometric methods 4, 5, the other reported methods are applicable for biological matrices using complex analytical instruments such as mass spectrophotometer 6-10.

The method suggested in this paper based on the reaction of eosin with the drug measuring the formation of binary complex in an attempt to develop a simple, sensitive, and accurate stability indicating   method for the determination of the studied drug either in pure form or in pharmaceutical preparations. 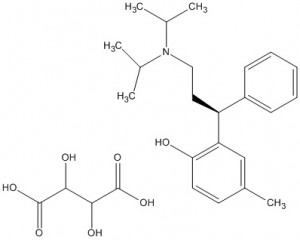 MATERIALS AND REAGENTS: All materials and reagents were of analytical grade.

Standard Solutions: A stock solution of (TOL) was prepared by dissolving 20.0 mg of (Tol) in 100.0 mL of water and was further diluted with the same solvent as appropriate. The standard solution was stable for 2 weeks when kept in the refrigerator.

Construction of the Calibration Curve: Accurately measured aliquots of (TOL) in the concentration range shown in Table 1 were transferred into a series of 10 ml volumetric flasks and diluted to about 7 ml with distilled water. A volume of 0.8ml of 4x10-3 M eosin solution was added to each flask, and the solutions were mixed well before the addition of o.7 ml 0.4M acetate buffer (pH 3.8). The mixtures were diluted with distilled water to 10 ml and mixed well. The absorbance was measured at 545 nm against an appropriate blank prepared simultaneously. The measured absorbance vs the final concentration in μg/mL were plotted to get the calibration graph. Alternatively, the regression equation was derived.

Procedure for tablet: Weigh and pulverize 20 tablets. Transfer a weighed quantity of the powder equivalent to 20.0 mg of tol into a small conical flask. Extract with 3 x 30 ml of water on three successive times each with 30 ml. Filter the extract into a 100 ml volumetric flask. Wash the conical flask with few mls of water. Pass the washings into the same conical flask and complete to the mark with the same solvent. Transfer aliquots covering the working concentration range into 10 ml volumetric flasks. Proceed as described under “General Procedure”, adopting the method. Determine the nominal content of the tablets either from the calibration curve or using the corresponding regression equation.

RESULTS AND DISCUSSION: Eosin (a tetrabromofluorescein derivative) is a yellowish red dye with green fluorescence. It has been utilized for the determination of many pharmaceutical compounds of interest either through spectrophotometric measurment such as, carbinoxamine maleate 11, fluoroquinolone antibacterials 12, gliclazide 13, ramipril and enalapril 14, lansoprazole and pantoprazole sodium sesquihydrate 15. 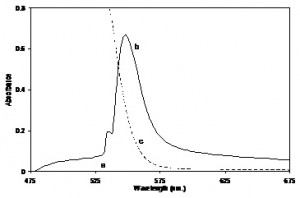 Optimization of Experimental Conditions: The spectrophotometric properties of the product as well as the different experimental parameters affecting its development and stability were carefully studied and optimized. Such factors were changed individually while the others were kept constant. These factors include; the pH, type of buffer, volume of buffer, volume of eosin and time.

In spectrophotometric measurement, due to the slight solubility of the complex formed with eosin in aqueous solutions, it is difficult for the produced color to be accurately and precisely measured. Therefore, studies for solving this problem were done. Extraction with organic solvent has been an approach 16, 17. Another method was the addition of non ionic surfactants, such as methyl cellulose and Tween 80 to solubilize and stabilize this type of complex 13, 18. In this study non ionic surfactants were tried to prevent complex precipitation.

However, the reproducibility upon these surfactants was found to be adversely affected; therefore, El-Brashy et al., method 12 was followed which based on keeping the sample concentration at maximum dilution before adding the dye solution, and mixing well before the addition of acidic buffer. By this procedure, the complex stability was greatly increased, with complete prevention of precipitate formation, and maximum precision was achieved, so it has the advantage of being simple and rapid and it can be used for the determination of the studied drugs in pure form and pharmaceutical preparations.

Equation 1: Effect of pH on dissociation of eosin

Where; R denotes the ionic part of eosin.

The influence of pH of Acetate buffer on the absorbance value of the binary complex was studied over the pH range 3.5-4.5. It was found that optimum absorbance values were achieved at pH 3.8 ±0.2 (Fig. 4) 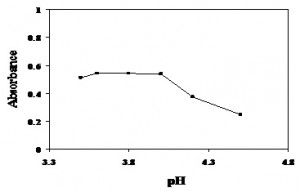 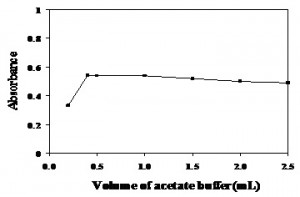 FIG. 4: EFFECT OF VOLUME OF 0.4 M ACETATE BUFFER ON THE ABSORBANCE VALUE OF 5 μg/mL TOL 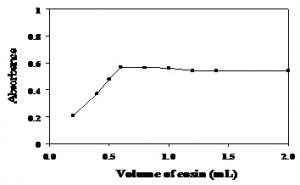 Analytical Performance: The absorbance-concentration plot was found to be linear over the range of 1-10 µg mL-1. Linear regression analysis of the data is shown in table 1.

Linear regression analysis of the data gave the following equation

Where; A is the absorbance in 1-cm cell, C is the concentration of the drug (μg/mL) and r is the correlation coefficient.

The limit of quantitation (LOQ) was calculated according to ICH Q2 Recommendation [20] by establishing the lowest concentration that can be measured, below which the calibration graph is non linear and was found to be 0.31 μg/mL for the method. LOQ was calculated from the following equation [21]:

Equation 3: Calculation of limit of quantitation

The limit of detection (LOD) was calculated according to ICH Q2 Recommendation [20] and was found to be 0.10 μg/mL for the method. LOD was calculated from the following equation 20:

Equation 4: Calculation of limit of detection

The proposed method was evaluated by calculating the accuracy as percent relative error and precision as percent standard deviation   (RSD %) (Table 1).

Validation of the method: The proposed method was tested for linearity, specificity, accuracy and precision.

Accuracy: Statistical analysis 21 of the results, obtained by the proposed and the reference methods for TOL using Student's t-test and variance ratio F-test, shows no significant difference between the performance of the method regarding the accuracy and precision, respectively (Table 1). The reference method 5 is based on spectrophoto- metric measuring of (Tol) in pure and pharmaceutical formulations. This method obeys Beer's law limits in the concentration range of 10-90 μg/mL exhibiting maximum absorbance at 280 nm.

Robustness of the method: The robustness of the method adopted for the method was demonstrated by the constancy of the absorbance value with the minor changes in the experimental parameters such as pH 3.8 ± 0.2 and change in the volume of eosin, (4× 10-3 M), using 0.8 ± 0.2 mL. These minor changes that may take place during the experimental operation didn't greatly affect the absorbance value.

TABLE 2: VALIDATION OF THE PROPOSED METHOD FOR THE DETERMINATION OF TOL IN PURE FORM

Pharmaceutical Applications: The proposed method was applied to the determination of the studied drug in its tablet preparation.

Specificity: The specificity of the method was investigated by observing any interference encountered from the common tablets excipients, such as talc, lactose, starch, avisil, gelatin, and magnesium stearate. These excipients didn't interfere with the proposed method.

Accuracy: The results of the proposed method were compared with those obtained using the reference method. Statistical analysis 21 of the results obtained using Student's t-test and variance ratio F-test revealed no significant difference between the performance of the method regarding the accuracy and precision, respectively (Table 3).

TABLE 3:  APPLICATION OF THE PROPOSED SPECTROPHOTOMETRIC METHOD TO THE DETERMINATION OF TOL IN COMMERCIAL TABLETS

SCHEME 1: THE PROPOSAL MECHANISM FOR THE REACTION BETWEEN TOL AND EOSIN 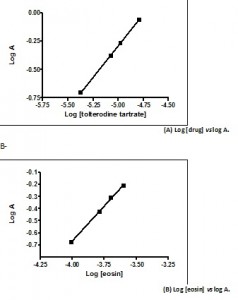 Stability indication of the method:

Forced Degradation Studies of TOL: In order to establish whether the analytical method was stability indicating or not, TOL was exposed to different forced degradation studies. Solutions for alkaline degradation were prepared by dissolving 100 mg TOL in the least amount of water, then the volume was completed to 100 ml in a volumetric flask with 5.0 M sodium hydroxide, then the solution was heated in a boiling water bath for three hours. The drug was found to be highly stable under these conditions as revealed from the constant absorbance values. The same method was followed using 5.0 M hydrochloric acid instead of 5.0 M sodium hydroxide. Similarly, the drug showed a high stability as indicated from the constant absorbance values. 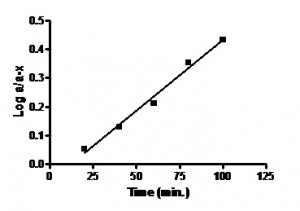 CONCLUSION: The present study describes a sensitive stability indicating method for the determination of the studied drug without interference from common tablet excipients. Hence, it can be applied for the routine quality control of the studied drug either in bulk or in its corresponding dosage forms especially that there are only few methods for its spectrophotometric measurements and they are less sensitive than this method. From economic point of view, the proposed method is simple, rapid and inexpensive besides the use of water as diluting solvent. So, it is a good alternative to the other few reported methods and to high cost HPLC methods.