DEVELOPMENT AND CHARACTERIZATION OF BILAYERD TRANSDERMAL FILM OF DICLOFENAC DIETHYLAMINE

DEVELOPMENT AND CHARACTERIZATION OF BILAYERD TRANSDERMAL FILM OF DICLOFENAC DIETHYLAMINE

ABSTRACT: The aim of this research work was to develop and characterise bilayer film and to investigate its potential as slow-release wound healing vehicle. The bilayer is composed of an upper layer impregnated with Diclofenac diethyl amine and a drug-free lower layer, which acted as a rate-controlling membrane. Solvent casting technique was employed to prepare transdermal films. Pre formulation studies are performed to determine solubility, melting point, compatibility and partition coefficient. Alginate based bilayer film for wound healing was successfully developed. The in vitro drug release study implied that by using the bilayer films which retain the drug for a longer period of time thus minimise the dressing changing frequency. The method adopted in this research work is genuine can be used as routine analysis of the drug.

INTRODUCTION:Transdermal drug delivery system should duplicate continuous intravenous infusion, which not only by passes hepatic ‘first pass’ elimination but also maintains a constant, prolonged and therapeutically effective drug level in the body. This is made possible by using intact skin as a port of drug administration to provide continuous delivery of drug in to systemic circulation. Following skin permeation, the drugs first reach the systemic circulation. The drug molecules are then transported to the target site, which could be relatively remote from the site of administration, to produce therapeutic action 1, 2, 3.

Prostaglandins are produced within the body's cells by the enzyme cyclo oxygenase (Cox). There actually are two Cox enzymes, Cox-1 and Cox-2. Both enzymes produce prostaglandins that promote inflammation, pain, and fever. However, only Cox-1 produces prostaglandins that support platelets and protect the stomach.

Wound care is “the provision of the appropriate environment for healing by both direct and indirect methods together with the prevention of skin breakdown 4, 5. Depending on the severity of the wound the desirable wound dressing may therefore serve among the purposes of to provide moisture and occlusion protection form infection and contamination, debridement and is application and removal dressing related trauma 6, 7, 8.

a)      Preparation of Drug Free Layer: The drug free films were prepared by solvent casting technique. The polymers (6gm sodium alginate F3) (6gm sodium alginate & 4gm gelatin F4) were dissolved in 94ml distilled water. 20ml of co solvent  mixture propylene glycol and methanol (15:5) was added to sodium alginate and gelatin gel, 6ml of glycerol was added in to the polymer gel while stirring then this polymeric solution (45gm) was poured within 9.6 cm diameter a Petri dish and allow to dry in oven for 72hrs at 400C. For evaporating solvent, the rate of evaporation was controlled by inverting the cut funnel over the Petri dish.

b)      Preparation of drug loaded layers: The drug loaded films were prepared by solvent casting technique. The polymers (6gm sodium alginate F3) (6gm sodium alginate&4gm gelatin F4) were dissolved in 74ml distilled water. 5gm of Diclofenac diethyl amine was dissolved in 20ml of co solvent mixture (propylene glycol and methanol 15:5) 6ml of glycerol was added in to the polymer gel while stirring then the drug solution was added to sodium alginate and sodium alginate & gelatin gel, then this solution (12.5gm in each) was poured on dried drug free layers and allow to dry in oven for 24hrs at 40oC. For evaporating solvent, the rate of evaporation was controlled by inverting the cut funnel over the Petri dish.

Where W is g of water, T is number of hours of experiment, S is exposed surface area of the film.

All openings including donor top and receptor arm were occluded with par films to prevent evaporation. Using a glass syringe, the volume of 0.5 ml samples were withdrawn from the receptor medium at regular time intervals for 48 h and receptor volume was kept constant by replacing equal volume of fresh PBS solution of 37oC. The samples were measured by using UV spectrophotometer at 285nm. The cumulative amount of Diclofenac diethyl amine drug diffusion was plotted against time. The Diclofenac diethyl amine drug flux was obtained from the steady state slope of each plot. The average values were calculated from Franz cell experiments. 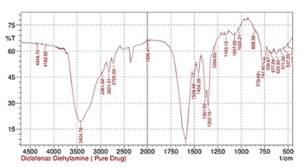 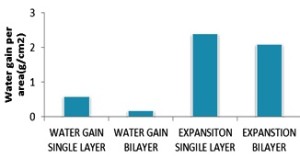 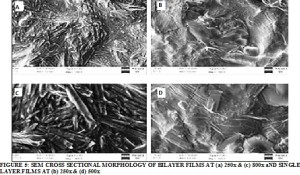 DISCUSSION: In the present study, bilayer transdermal films of Diclofenac diethyl amine were prepared by Solvent casting method using Sodium alginate and gelatin as polymers. The films F1and F4 were found to be having good film formation and smooth in their appearance. The FT-IR spectral analysis showed that there were no physical and chemical interactions between the drug and polymers and they were found to be compatible with each other.

The drug content Percentage yield was in the range 6.4±2.02, 2±0.3%. A good tensile strength was found in all the films, ranging from 20.80±2.29, 26.22± 0.95MPa. The Moisture vapour transmission rate was found to be low. This helps the formulations to be stable and prevents them from drying and brittle.  The percentage of solvent loss was 8.48±0.51, 36.29±0.75g which prevents the films from drying. The cross-sectional micrographs of bilayer and single layer films are shown in Fig. 3.

The Diclofenac diethyl amine would expect to re-dissolve when in contact with solvent.

In vitro permeation studies were also performed to compare drug release profiles from single layer and bilayer films. Drug release profile was shown in terms of cumulative amount over 48 h in Fig.5.The flux of Diclofenac diethyl amine was low due to the presence of an extra layer in bilayer film formulations which acted as a controlling membrane. It was proposed that lower layer plays a part in slowed drug release from wound dressings when they come into contact with wound exudates. As the lower layer had fully swollen, the fluid continued to penetrate the upper layer which containing drug.

As a consequence, chain relaxation takes place and the incorporated drug such as Diclofenac diethyl amine begins to diffuse from the swollen upper layer. It had been revealed that slow release of drug from polymeric medicated dressings offer some potential advantages which generally includes prolonging the action of the active drug over longer periods of time by allowing continual release from such dosage form. It had been also cited that the wound care products which release a therapeutic substance to a wound interface in a slow release manner for a prolong period of time could improve the patient compliance by reducing the problem encountered with frequent dressing changes. Thus the present in vitro drug release study implied that by using the bilayer films which retain the drug for a longer period of time thus minimise the dressing changing frequency.

CONCLUSION: On the basis of the in vitro skin permeation study, the formulations yielded desired drug release by zero-order kinetics. Linear regression analysis of the drug diffusion profile showed that the mechanism of drug release was following diffusion pattern. The bilayer transdermal films we made could provide the delivery of drug at a controlled rate across intact skin and might be used in clinical situations. The formulations definitely improve patient compliance and reduce the wound dressing frequency.The bilayer film with a low Moisture vapour transmission rate may be useful for treating low suppurating wounds.

The mechanically strong bilayer films which hydrate slowly and low drug flux infer that they are potentially better suited for slow release application on wound surfaces.

ACKNOWLEDGEMENT: The authors wish to thank the management and staff members of Venkateshwara Institute of Pharmaceutical Sciences, Nalgonda, Andhra Pradesh, for providing support and assistance to conduct this work in the laboratory.

It is my privilege to express my sincere thanks to Dr. K. Venugopal Rao, professor &Mr. V. Harikrishna, Assistant Professor, Head of the Department of Pharmaceutics, Venkateshwara Institute of Pharmaceutical Sciences under whose exemplary guidance, help and encouragement to this work has been successfully completed.