ABSTRACT: The objective of this research was to develop and characterize floating microspheres of esomeprazole magnesium trihydrate by solvent evaporation method using various polymers.  The esomeprazole magnesium trihydrate floating microspheres was successfully developed by solvent evaporation method using HPMC, CA, Carbopol 940, Eudragit L 100 in various proportions. Further, the prepared floating microspheres were characterized for particle size, morphology, micrometric studies, entrapment efficiency, in vitro drug release, release kinetics, compatibility studies (FTIR), SEM and DSC studies. The EMT microspheres were free-flowing. The mean particle size ranged from 100.08±0.95 to 500.42±1.03μm and the entrapment efficiency ranged from 67.11±3.01 to 96.38±2.34%. SEM revealed a hollow spherical structure of microspheres with a smooth surface morphology and the internal surface was porous due to the evaporation of solvent entrapped within the shell of microspheres. The IR Spectrum obtained from EMT and polymers were identical and there was no change in the functional group absorption of any molecule present in formulated product. Formulation F9 was found to be highest in-vitro buoyancy 94.95±1.43. Amongst the formulation, F9 was found to be the best formulation as it release EMT 94.60% in a sustained manner. The results obtained was clearly indicated that prepared floating microspheres of EMT may prove to be potential candidate for safe and effective sustained drug delivery over an extended period of time which can reduce dosing frequency.

INTRODUCTION: Floating drug delivery systems were first described by Davis in 1968. It is possible to prolong the gastric residence time of drugs using these systems 1. Several techniques are used to design gastro retentive dosage forms. These include floating, swelling, inflation, adhesion, high-density systems and low density systems that increase the gastric residence time. Gastric retention is useful for drugs which (i) act locally; (ii) have a narrow absorption window in the small intestinal region; (iii) unstable in the intestinal environment; (iv) low solubility at high pH environment.

Proton pump inhibitors (PPIs) are the most potent inhibitors of gastric acid secretion and are effective for treating all gastric acid-related disorders. EMT is indicated for the treatment of gastroesophageal reflux disease in adults and children; risk reduction of NSAIDs associated gastric ulcer, H. pylori eradication and control of pathological hypersecretory conditions associated with Zollinger-Ellison syndrome.

In the present study EMT was selected as the payload model drug to treat the peptic ulcer. EMT  is  a  proton  pump  inhibitor  with  a  bioavailability  of  50- 90%.  Its  metabolism  is  mainly  by  liver  and  excretion  by  renal  and  fecal.  It acts by irreversibly blocking the (H+K+) ATPase enzyme system of the gastric parietal cell. Its half-life is  1-1.5  hrs  with  poor  absorption  may  be  because  of  degradation  and  poor  solubility.  The solubility and absorption can be improved with an increase in the gastric residence time and also by creating basic pH with incorporation of carbon dioxide 5.

Solvent Evaporation Technique: In this technique, drug and polymer (CA, HPMC, Carbopol 940, Eudragit L 100) were dissolved in a 20 ml. acetone which placed in small beaker with magnetic bead on magnetic stirrer at room temperature. The drug-polymer mixture was poured into 100 ml. liquid paraffin containing Span 60 maintained at a temperature of 30-40°C and subsequently stirred by mechanical stirrer at ranging agitation speed for 60 minutes to allow the volatile solvent to evaporate. The microspheres formed were filtered, washed with n-hexane and air-dried for 24 hours and stored in dessicator.

Where V and Vo are the volumes of the sample after and before the standard tapping, respectively.

Hausner’s ratio: Hausner’s ratio of floating microspheres is determined by comparing the tapped density to the fluff density using the equation.

Where, Qf and Qs are the masses of floating and settled hollow microspheres, respectively.

RESULTS AND DISCUSSION: In the present study floating microspheres of EMT were prepared. The EMT drug was identified and characterized as per requirement of the Indian Pharmacopoeia, 2010. The physical appearance was determined by visual examination. 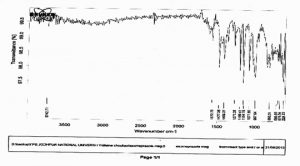 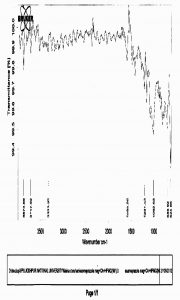 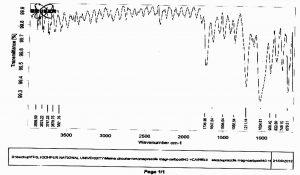 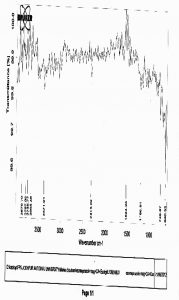 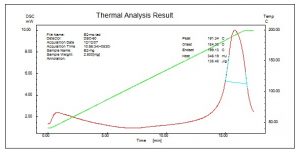 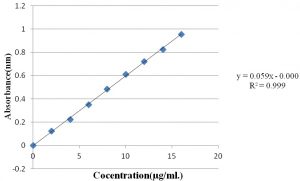 DISCUSSION: UV spectrum of Esomeprazole Magnesium Trihydrate in Simulated Gastric Fluid showed that the drug has λ max at 215 nm. The calibration curve of EMT was prepared in

Simulated Gastric Fluid. The slope of the calibration curve is as follows and the solution follows Beer’s law in the range of 2-20μg/ml.

TABLE 11: VALUES OF ANGLE OF REPOSE, CARR’S INDEX AND HAUSNER’S RATIO AS AN INDICATION OF FLOW PROPERTIES OF PREPARED MICROSPHERES 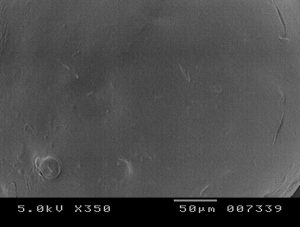 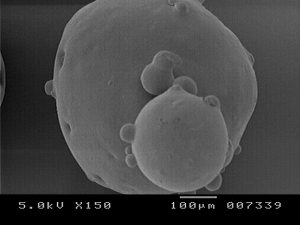 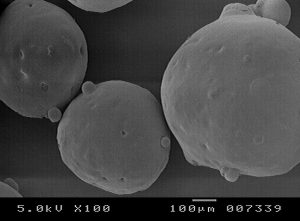 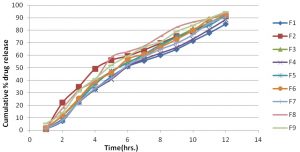 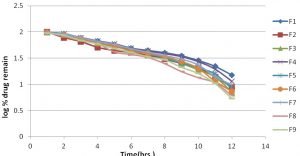 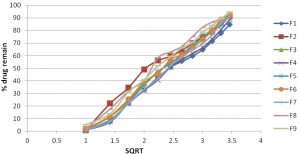 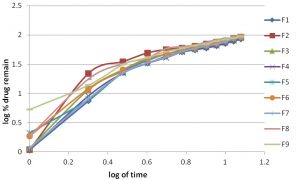 DISCUSSION: Floating microspheres have a bulk density less than gastric fluids and thus it remains buoyant in the stomach without affecting gastric emptying rate for a prolonged period of time. While the system is floating on the gastric contents, the drug is released slowly at the desired rate from the system. After release of drug, the residual system is emptied from stomach. This results in an increased gastric residence time and a better control of the fluctuation in plasma drug concentration. Single unit formulations (floating tablet) are associated with problems such as sticking together or being obstructed in the gastro-intestinal tract, which may have a potential danger of producing irritation. On the other hand a floating system made of multiple unit forms (floating microspheres) has relative merits compared to a single unit preparation. Floating microspheres provide a constant and prolonged therapeutic effect which will reduce dosing frequency.

Calibration curve for estimation of EMT was constructed in Simulated Gastric Fluid at 215 nm. The method obeyed Beer’s Lambert law in the range of 0 to 16 mcg/ ml. or µg/ml. Microspheres prepared by emulsion solvent evaporation method and in this method emulsion was stabilized by Span 60 and the volatile solvent (acetone) get evaporated leaving a solidified thin film at the interface between aqueous phase and organic phase, where EMT get encapsulated in the core coat of polymers.

Micromeritic properties: The mean particle size of microsphere formulations F1 to F9 containing different polymers in the range of 100.08±0.95 to 500.42±1.03 respectively. The mean particle size of the floating microspheres was found to increase with increasing polymer concentration. The viscosity of the medium increases at a higher polymer concentration resulting in enhanced interfacial tension. Shearing efficiency is also diminished at higher viscosities. This results in the formation of larger particles. The values of Carr’s index and angle of repose indicate excellent flow properties. The percentage yield of the floating microspheres increased with increasing polymer concentration.

In-vitro buoyancy: The buoyancy test was carried out to investigate the floatability of the prepared microspheres. The microspheres were spread over the surface of a SGF and the fraction of microspheres buoyant and settled down as a function of time was quantitated. The in-vitro buoyancy of formulation F1 to F9 was in range of 75.43±2.02 to 94.95±1.43 respectively. Among all formulations F9 was found to be highest in-vitro buoyancy 94.95±1.43. The results also showed a tendency that the larger the particle size, the longer floating time.

In-vitro drug release: In-vitro drug release studies of EMT from floating microspheres were performed in pH 1.2 for 12 hours in dissolution test apparatus. Amongst the formulation, F9 was found to be the best formulation as it release EMT 94.60% in a sustained manner with constant fashion over extended period of time (after 12 hours).

It suggests that the Higuchi diffusion plots of all the formulations were fairly linear and we can conclude that the drug released by Higuchi’s diffusion mechanism. The formulations are also treated to Peppa’s plots by taking log percent versus log time.

The plots are found to be fairly linear and regression values (n value) of all formulations ranges from lowest 0.3349 to highest 0.8553 which in the range of 0.45 < n < 0.89. This suggests that the drug was released by non-Fickian control (Anomalous diffusion) with swelling. Four types of graphs i.e. cumulative percent drug release, first order, Higuchi diffusion and Peppa’s exponential plots of all formulations.

Infrared Spectroscopy (FTIR): The prepared microspheres were characterized by FTIR Spectroscopy to find out any chemical interaction between EMT and polymers used. The IR Spectrum obtained of EMT and polymers like HPMC, CA, Eudragit L 100 and Carbopol 940 were identical and there was no change in the functional group absorption of any molecule present in formulated product.

SUMMARY AND CONCLUSION: Floating microspheres of EMT can be successfully prepared using HPMC, CA, Carbopol 940 and Eudragit L 100 as polymers by solvent evaporation method. The percentage yield of all floating microsphere formulations was more than 60% suggesting the method used for encapsulation was effective. The percent yield was significantly increased as the amount of polymer was increased in each formulation. The entrapment efficiency was good in all the cases. This suggested that optimized parameters were used in the method of preparation. The in-vitro buoyancy was more than 70% after 12 hours indicated satisfactory performance of proposed formulations. The percent buoyancy increased significantly as the amount of polymer was increased in each preparation method. The mean particle size of microspheres was in range of 100.08 ± 0.95 - 500.42 ± 1.03 µm depending upon the type of polymer used. The particle size increased significantly as the amount of polymer increased. Among all formulations,  F9 was found to be the best formulation as it release  EMT 94.60% in a sustained manner with constant fashion over extended period of time (after 12 hours).

Hence, finally it was concluded that prepared floating microspheres of EMT may prove to be potential candidate for safe and effective sustained drug delivery over an extended period of time which can reduce dosing frequency.