ABSTRACT: Sumatriptan succinate is the 5H1 receptor agonist and used in the treatment of migraine, cluster headache. The main objective is to develop ideal anti-migraine nasal mucoadhesive microparticles as local and systemic drug delivery system. An attempt was made to formulate the nasal mucoadhesive microparticle of Sumatriptan succinate with excipients like mucoadhesive polymers i.e., HPMC, ethyl cellulose, etc., by using modified solvent evaporation method. And evaluated them for production yield, drug loading efficiency, surface morphology by SEM, drug content, particle size, in-vitro drug release studies. The release rates were studied using GraphPad Prism software. The prepared micro-particles of Sumatriptan succinate formulations were found to be satisfactory particle size i.e., in the range of 33.3 to 59.94 µm, mucoadhesion time of  F5 found to be 321 min drug content was found to be 81.79 % to 89.16%, and drug release of the drug follows zero order kinetic model. Optimized formulation F5 shows that the developed formulations have shown improved dissolution profile in comparison to other formulation. The developed nasal mucoadhesive microparticles have the potential to deliver of anti-migraine drugs via the nasal route.

INTRODUCTION: Intranasal therapy has been an accepted and preferred form of treatment for many diseases in the Ayurvedic system of Indian medicine. There are some formulations available in the market like nasal drops, spray, gel, powders, microparticles, ointments, microemulsions, etc., 1 and these have huge advantages by comparing with another route of administration, self-medication is possible,

It enhances the better systemic bioavailability of protein and peptide type of drugs by rapid absorption due to formulation has such bioadhesive polymers 2 and overcome the problems of the first-pass metabolism, degrading of drug in GIT, which is occurred in oral route and it is needle-free, overcome the problems of need of sterility, pain, discomfort which caused by parenteral route of administration, also is suitable for restricting and obstacles blood-brain barrier so that drug can be delivered in both controlled and conventional release by local and systemic in the biophase of CNS. Although, it has some limitations like high molecular weight compounds cannot be delivered through this route, irritation of nasal mucosa by drugs may occur, but these can be negotiable 3.

Migraine: It is a primary CNS disorder, characterized by the repetition of attacks rather than a single attack, which may recur in many individuals under certain circumstances (e.g., stress). Headache with focal neurological signs or symptoms like visual disturbance, numbness or tingling in the hand, tongue or side of the face, or weakness in one arm is common in this case 4.

Micro Particulate Drug Delivery System: Microparticles are particulate dispersion or solid particles with 1-1000 μm in size range. The microparticles system allows entrapping the active drug within the matrix, which eliminates the environmental stability problems, minimize the adverse effects regarding drug, increase the bioavailability by sustained activity, as well as enhance the patient compliance. This article focused on the study of prepared microparticles evaluation and released kinetic action 5.

Fourier Transform Infrared Spectroscopy (FTIR): 7 In the development of formulation drug and polymer are in close contact with each other and the stability of developed formulations depends on these interactions. Proper care was taken while selecting suitable polymers for formulations. Drug sample or polymer sample mixed with potassium bromide and FTIR spectra were taken. The spectrum of the drug was compared with combined spectra of polymer and drug. Shifting or disappearance of drug peak was studied.

X-Ray Diffraction (XRD): 8, 9 For characterization of crystalline state, the X-ray diffraction pattern of drug alone and in combination with polymers were determined using X-ray diffractometer with a copper target, at a voltage of 40 KV and current of 20MA. The rate of the scanning was 0.30 °C/min.

Differential Scanning Calorimetry (DSC): 10 Thermograms of the drug, a mixture of drug and polymers were recorded using a differential scanning calorimeter and were compared. 5 mg sample was sealed in aluminum pans which are flat bottomed and heated at a temperature range of 100-300 °C at a rate of 10° k/min using alumina as a reference standard.

Preparation of Sumatriptan Succinate Loaded Micro Particles: 11, 12 The formulation chart for formulating microparticles is shown in the following table.

The active drug placed in a mixture of organic solvent to which weighed HPMC was added to form a polymer solution. Ethyl cellulose was dissolved in acetone separately. Both the solutions were mixed and added in a beaker containing liquid paraffin with tween 80 by the help of a syringe, and continuous mechanical stirring was carried out at 2000 rpm for 2 h. The microparticles obtained were filtered and washed with ether (Diagrammatic process shown in Fig. 1). 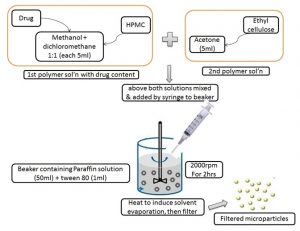 Percentage Yield of Production:13 The percentage yield was calculated using the following formula:

Determination of Drug Loading Efficiency: 14 Drug loaded microparticles (100 mg) were dissolved in 10 ml of 0.1 N HCl and keep for 12 hrs. Filter the content present in the solution was determined at 226 nm using a UV visible spectrophotometer. Drug loading in the microparticles was estimated by using the following Formula:

Drug Content: 15 Prepared microparticles of drugs were assayed spectrophotometrically for the drug content at the maximum wavelength by proper dilution with solvent 0.1 N HCl:

Mucoadhesive Time: 16 A small piece of sheep nasal mucosa was tied on to a glass slide using thread. The micro particle was spread on, and the glass slide hung on groves of a USP tablet DT apparatus, operated in a manner that regular up-down movements in the beaker containing phosphate buffer pH 6.4. Note down the time required for complete washing of microparticles.

In-vitro Drug Release Studies: 17 It was performed using USP (type 2) dissolution apparatus. Around 10 mg of sample was placed in a tea bag and tested in simulated nasal electrolyte solution (SNES) with 30 rpm speed with 37 ºC. Withdrawn sample (1 ml) at predetermined time intervals (3, 6, 10, 25, 35, 50, 70, 90, 120, 180, and 240 min) and for each withdrawal replaced the corresponding volume with a fresh simulated nasal electrolyte solution. Samples were filtered and assayed spectrophotometrically at 226 nm.

IR Study: IR spectral peaks of the pure drug and drug in combination with polymers are observed in Fig. 2 which indicates that there is no interaction between Sumatriptan succinate and polymers when compared with the infrared spectrum of the pure drug as all functional group frequencies were present. The IR spectrum obtained of Sumatriptan succinate Formulation shows characteristic absorption peaks observed in Fig. 3.

DSC study: By using DSC analysis of drug and polymer, the nature of the drug inside the polymer matrix can be assessed. The results of DSC analysis showed that the melting temperature for the pure drug, HPMC and ethyl cellulose were 165.55 ºC, 214 ºC, and 202.14 ºC. The integrity of drug was unaffected when developed into microparticle, this is confirmed by DSC of formulation where the composite melting peaks of pure drug, HPMC and ethyl cellulose were found to be at 174.3 ºC, 210 ºC and 205.53 ºC indicating compatibility between drug-polymer and processing conditions.

X-Ray Diffractometry Study of Powder sample: It is a powerful technique for identification of crystalline nature of drug and its combination with polymer, excipients.

The internal structures of Sumatriptan succinate, HPMC and ethyl cellulose are shown in Figure. The X-ray diffraction pattern of the selected formulation F5 is shown in Fig. 5. The data indicated that the initial crystalline behavior of Sumatriptan succinate had been altered marginally in the formulation. This may be attributed to the effect of amorphous characteristics of the polymer and may be due to less availability of the drug for diffraction pattern in the formulation.

Percentage Production Yield: From the study % production yield of developed formulations was found to independent of the concentration of polymers employed in the development of microparticles. The result data are shown in Table 2.

Drug Loading Efficiency: The drug loading efficiency of Sumatriptan succinate microparticle were successfully increased with HPMC polymers and decreased with ethyl cellulose polymers which range 79.28%-88.92%. The result data are shown in Table 2.

Drug Content Uniformity: The percentage of drug content for formulated microparticles was found to be 83.22% to 89.16%. It complies with official specifications. All the formulation showed uniform drug content which was by percent drug loading study. The result data are shown in Table 2.

Shape and Surface Morphology: Morphology of the microparticle was determined by SEM and was found spherical, and their surface was smooth and devoid of cracks giving them good appearance shown in Fig. 6. The SEM data obtained on the drug-loaded microparticle are shown in Table 2.

Particle Size: The mean particle size of the microparticles was found in the range of 33.3 to 59.94µm.

According to literature, the size should be between 10 to 100 µm, which is appropriate for adminis-tering via the nasal route.

The speed of the stirrer increases the particle size decreases; thus in this study, the starring speed was kept constant at 2000 rpm and observed that increase in speed causes breaking of the droplets resulting in non-uniform microparticles. The result data are shown in Table 2.

Drug Release Profile: In-vitro study the formulation F1 shows 85.68% while F5 shows 96.38% drug release. It evident that, as the amount of hydrophobic polymer (EC) increases, drug release decreases. The increase in the amount of EC may increase the density of the polymer matrix at a higher concentration which may result in an increased diffusion path length and hence a decrease in the overall drug release matrix. The result data are shown in Table 3 and observed in Fig. 7.

Kinetic Release Data for All Formulations of Microparticles: For studying the release kinetics, all formulations fit in the mathematical models. The drug release data obtained of all formulations were plotted in the following modes of data treatment, and shown in Fig. 8, 9, 10. 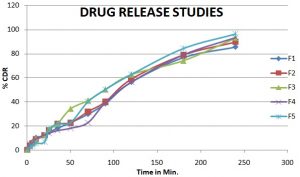 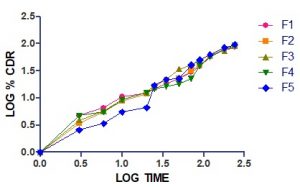 Results of kinetic data showed that release pattern of the drug from developed in the microparticulate system is by Higuchi’s classical diffusion model where the release of the drug is dependent on partially on drug loaded into the microparticulate system and due to polymer relaxation. Slope values for Poppa’s model were found to be more than 0.7 which indicated non-fickian release process and was of an anomalous type which further confirmed drug release pattern is due to polymer relaxation.

In-vitro studies showed that formulation F5 showed better release than other formulation. Its possibility shows improvement of bioavailability. Thus, the formulated microparticles seem to be a potential candidate as an intranasal controlled drug delivery system for symptomatic therapy of migraine.

CONFLICT OF INTEREST: Myself Mr. Sunil T. Galatage, as the author of the manuscript and don’t have a direct financial relationship with the commercial identities mentioned in the paper that might lead to a conflict of interest for any of the authors.