DEVELOPMENT AND CHARACTERIZATION OF MUCOADHESIVE MICROSPHERES OF LEVOSALBUTAMOL SULPHATE

Objective: To formulate and evaluate the Levosalbutamol sulphate loaded microspheres of Chitosan and microspheres of Flax seed Mucilage in which both the polymers were checked as potential mucoadhesive agents and crosslinking was done with Glutaraldehyde for prolonging drug release for asthma therapy.

Material and Method: Chitosan and Flax seed mucilage (by drying in Hot Air Oven) were used in appropriate concentration and crosslinked microspheres were prepared by Spray drying. They were evaluated for %Entrapment efficiency, Swelling behavior, %Mucoadhesion and In-vitro drug release. The optimized batches were subjected to Particle-size distribution, Scanning-electron microscopy, Aerosolization behavior and Stability study.

Result and Discussion: Microspheres having Chitosan polymer: Drug ratio of 2:1 and 0.6% of Glutaraldehyde and that of Flax seed Mucilage: Drug ratio of 3:1 and 0.9% of Glutaraldehyde had good mucoadhesion ability (89.50% and 85.11% respectively). Release rate was retarded up to 8 h and follows non-fickian diffusion. Particle-size distribution of optimized batches was represented by span index (3.822 and 2.953 respectively) and value was nearer to marketed product (1.975). Aerosolization behavior could be comparable with marketed product. Stability study showed no changes. The overall results of this study indicate that microspheres described above may be considered as Dry Powder Inhaler of Levosalbutamol sulphate for asthma.

INTRODUCTION: Pulmonary drug delivery is an important research area which impacts the treatment of illnesses including asthma, chronic obstructive pulmonary disease and various other diseases.Asthma is one of the leading diseases in the world and needs some serious attention. It can lead to various complications like bronchospasm, respiratory failure; chronic obstructive pulmonary disease (COPD) etc. Inhalation gives the most direct access to drug target. The delivery of drug by this route has distinct advantages of protecting the drug from the hepatic first-pass elimination, gut wall metabolism, and destruction in Gastro intestinal tract and it also offers excellent controlled release of drug and better systemic therapeutic response 1. Recently, dosage forms that can precisely control the release rates and target drugs to a specific body site have made an enormous impact in the formulation and development of Novel Drug Delivery Systems. Microspheres form an important part of such novel drug delivery systems 2.

The use of microsphere-based therapy allows drug release to be carefully tailored to the specific treatment site through the choice and formulation of various drug–polymer combinations 3.

Microspheres can be developed into an optimal drug delivery system which will provide the desired release profile. Microsphere based systems may increase the life span of the drug encapsulated and control the release of the drug 4.However, the success of these microspheres is limited owing to their short residence 5 times at the site of absorption. It would therefore be advantageous to have means for providing an intimate contact 6-9 of the drug delivery system with the absorbing membranes.

Bioadhesive microspheres have advantages such as more intimate contact with the mucus layer and specific targeting of drugs to the 10-13 absorption sites 5. Four main approaches have been proposed: Ionotropic gelation with an oppositely charged, simple or complex Coacervation, Emulsification/ Solvent evaporation and, more recently, Spray drying 6. Microspheres prepared by the spray-drying technique can be administered by oral, parenteral, or nasal routes.

Recently, spray-dried microspheres have been demonstrated as controlled release carriers for water-soluble and water insoluble drugs 7. This technique can be used either for both heat resistant and heat-sensitive drugs or for both water soluble and water-insoluble drugs or for both hydrophilic and hydrophobic polymers. In addition, it is a one-stage continuous process, easy to scale-up, and only slightly dependent upon solubility of drug and polymer. The particle size of the microspheres prepared by the spray-drying method ranged from a micron to several tens of microns and had a relatively narrow distribution 7.

The objective of present study was to formulate and evaluate the Levosalbutamol sulphate loaded microspheres of Chitosan and the same drug loaded microspheres of Flax seed Mucilage by spray drying method, in which both the polymers were to be checked as potential mucoadhesive agents and their cross linking was to be done with Glutaraldehyde for prolonging drug release of Levosalbutamol sulphate for asthma therapy.

Chitosan is a cationic biopolymer obtained from N-deacetylation of chitin. Chitin is the principal component of protective cuticles of crustaceans such as crabs, shrimps, prawns, lobsters and cell walls of some fungi such as aspergillusand mucor. Chitin is a straight homopolymer composed of - (1, 4)-linked N-acetyl-glucosamine units while Chitosan comprises of copolymers of glucosamine and N-acetyl-glucosamine. Chitosan is a weak base and is insoluble in water and organic solvents, however, it is soluble in dilute aqueous acidic solution (pH <6.5), which can convert the glucosamine units into a soluble form R–NH3+. Chitosan, a natural cationic polysaccharide, finds many applications in the pharmaceutical and biomedical fields that have been extensively reviewed in the literature, due to its favourable characteristics such as non-toxicity, biocompatibility, biodegradability and properties such as bioadhesion.

The positively charged microspheres enhanced the mucoadhesive properties and made these suitable for delivery of drugs via the nasal or gastrointestinal routes. Chitosan microspheres obtained by this method are characterized by high sphericity and specific surface area, important parameters for application in the pharmaceutical field (drug delivery systems) 8.

Flaxseed (with the moisture of around 93%) contains about 6.5% of mucilage; up to 10.2% .Currently Flaxseed mucilage is characterized as a mixture of neutral arabinoxylans and acidic rhamnose containing polysaccharides. The ratio of rhamnose to xylose, which roughly indicates the ratio of acidic to neutral polysaccharides, may range from 0.3 to 2.2, but the average ratio is around 0.7.

The neutral fraction is an arabinoxylan having a (1/4)-b-D-xylan backbone to which arabinose and galactose side chains are attached at positions 2 and/or 3. The acidic fraction has a backbone of (1/2)-linked a-L-rhamnopyranosyland (1/4)-linked D-galactopyrano syluronic acid residues, with side chains of fucose and galactose residues, the former essentially at the non-reducing end 9. Mucilage removal by wet processes has been studied by many researchers 10. Optimization of a spray drying process for Flaxseed gumwas carried out by Oomahet al, 2008.

Chitosan microspheres prepared by the spray-drying technique cannot be kept suspended in water because of their greater swelling and dissolution. Therefore, non-cross-linked Chitosan microspheres prepared by spray-drying technique are unsuitable for the purpose of sustained delivery systems. In order to prepare stabilized Chitosan microspheres by spray drying, cross-linking agents such as formaldehyde and glutaraldehyde have been used as stabilizing agents 11. Glutaraldehyde was used to crosslink the hydro soluble matrix in order to improve the adhesion between matrix and fiber and moisture resistance 12.

Levosalbutamol is the first example of a β adrenergic agonist that may have reduced toxicity and enhanced efficacy due to stereo selective binding at the receptor. Levosalbutamol sulphate is a selective β2 – adreno receptor agonist and is readily absorbed from G.I.T. but it is subjected to considerable first pass metabolism. Thus its oral bioavailability is only 50%. The potential for the S- enantiomer to cause adverse effects led to the development of a single R- enantiomer of albuterol, marketed as Levalbuterol.

Preparation of Microspheres: By observation of above parameters Microspheres were prepared by spray-drying technique (Table 2) by same procedure as above but here for cross linking different concentration of Glutaraldehyde (GLA) were to be added. Feed solution was prepared by dissolving the drug and polymer by using a paddle stirrer. For cross linking process stirring is carried out at 2000 rpm for 30 min.

Characterization of the Prepared Microspheres:

Mtherotical = Theoretical amount of drug in microspheres calculated from the quantity added in the fabrication process.

The ratio of adhered microspheres was computed as percent mucoadhesion using following equation.

Where,   Wa = weight of microspheres applied;

W1 = weight of microspheres leached out.

Stability 31: The microsphere batches was stored at 40±1oC and 75% RH for 30 days and observed for the size and shape at 10 days interval. The drug content was determined after the study using the method of determination of drug loading.

Extraction of Flax seed mucilage and its characterization:

-          It also affects viscosity of main product as per literature.

That’s why this method was excluded.

The mucilage obtained by spray drying and by drying in hot air oven was of good quality but spray drying gives too law yield so, this method was also not used for further project

It was used to determine the existence of possible interaction between the polymer and drug. The DSC thermogram of pure Levosalbutamol sulphate did not show any melting point but a decomposition pathway, characterized by two exothermic peaks 231.92 and 290.02ºC, which is comparable as reported in literature 32. The DSC of Chitosan microspheres showed a peak at about 230.97 ºC while the microspheres of Flax seed mucilage shows a peak at about 224.45ºC , which were found in DSC of pure drug. Thus it can be concluded that there was no interaction between drug and polymer. 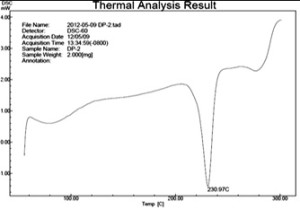 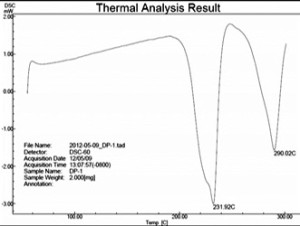 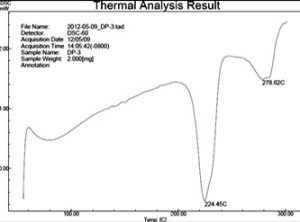 FIGURE 3 (A): FTIR OF LEVOSALBUTAMOL SULPHATE 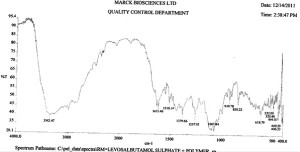 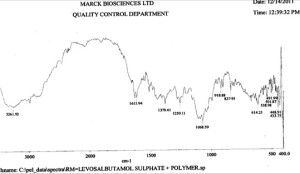 Here Cross-linking of polymer was to be done to retard the drug release and to decrease the swelling behaviour of polymers. 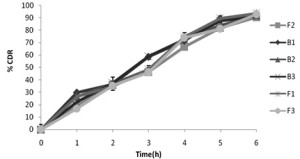 Chitosan could be covalently cross-linked with Glutaraldehyde through its amino groups. The denser the cross-linking bridges between the Chitosan molecules, the more packed is the structure. Such structure can be characterized by lower and slower penetration of the solvent through the chain structures of the polymer, suggesting that the swelling ratio and hence the release characteristics of the microspheres can be controlled 35.

FIGURE 5(B): SEM OF MICROSPHERES OF CHITOSAN 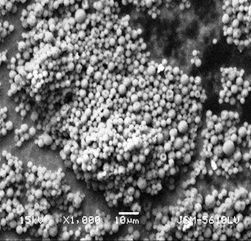 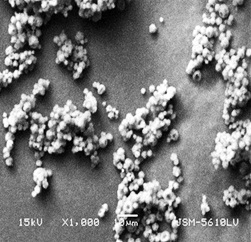 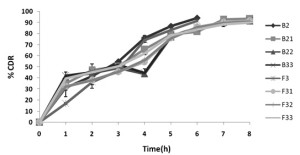 This type of drug release is controlled by combination of polymer swelling, erosion and diffusion through the hydrated matrix (Diffusion and chain relaxation).

Aerodynamic properties: The aerosolization properties of two optimized batches of microspheres were evaluated as compare to marketed product. % of deposition of drug at each stage of Cascade Impactor can be seen in Figure 8. 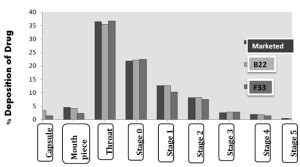 The recoverable powder mass for all formulations were 85-93%. From the graph it can be observed that the maximum % deposition of microspheres was found at the throat part and stage 0 of the Cascade Impactor. Here, ANOVA was applied for % of weight distribution on each stage, in which Fcrit > Fcal, which concludes that there was no significant difference in Aerosolization properties for Optimized batch as compare to marketed preparation as per Table 8.

For further confirmation Dunnett's Multiple Comparison Test was also applied and there was no significant difference was observed as per Table 9.

TABLE 8: ANOVA FOR % DEPOSITED FRACTION ON EACH STAGE FOR TWO OPTIMIZED BATCHES AND MARKETED PREPARATION

Particle size distributions were compared determining mass median aerodynamic diameter (MMAD), geometric standard deviation (GSD), and fine particle fraction <4.7μm aerodynamic diameter (FPF<4.7μm). Here the Aim of formulation is to target the Upper region of Respiratory system, the diameter of particles in the range of 5-10μm are desirable. Hence no need to find FPF. MMAD was calculated from a best-fit plot of cumulative mass percentage undersize against the effective cut-off diameter (ECD) of the Cascade Impactor on a log-probability graph by online MMAD calculator for Anderson Cascade Impactor, which is described in Table 10.

TABLE 10: MMAD AND GSD OF OPTIMIZED BATCH AND MARKETED FORMULATION 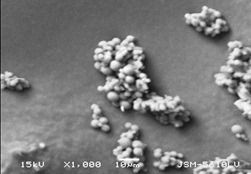 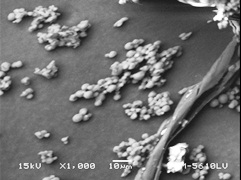 FIGURE 5(D) SEM OF MICROSPHERES OF CHITOSAN AFTER 30 DAYS

CONCLUSION: The present study demonstrates the size and shape of the spray-dried powders is suitable for upper part of respiratory system. Therefore, these formulations hold great potential for treating diseases that require targeted delivery at Upper region of respiratory system with reduced dosing frequency, leading to fewer systemic side effects and improve patient compliance. Thus, on the basis of all the studies we can conclude that the batch having Chitosan polymer to Drug ratio of 2:1 and 0.6% concentration of Glutaraldehyde and Flax seed Mucilage to Drug ratio of 3:1 and 0.9% concentration of Glutaraldehyde may be considered as promising Dry Powder Inhaler of Levosalbutamol sulphate.

However exhaustive tissue distribution study and clinical trial still remain before this formulation introducing in the market.