ABSTRACT: Objective: Formulation and development of polymeric microparticles containing murrayanol for better treatment of diabetes mellitus. Methods: Successive solvent extraction of leaves of Murraya koenigii plant was done. The active constituent of leaves that is murrayanol was isolated and identified through HPLC and FTIR. Polymeric microparticles were selected as a carrier system and formulated by the solvent evaporation method. Characterization and performance evaluation of particulate system loaded with herbal plant extract of the Murraya koenigii leaves was done. Results: These results suggest that the polymeric microparticles are not only effective in the rapid attainment of high drug concentration in the body and also maintain the same over a prolonged period of time. Microparticles were formulated and characterized for the particle size, shape and its distribution, percentage drug entrapment and in-vitro drug release profile along with the stability studies. In-vivo tissue distribution studies on albino rats suggested the accumulation of formulations in the different organs. Conclusion: Prolonged release of natural drug from the carrier system, decrease the dosing frequency and also decrease the dose size.  Better results than marketed synthetic anti-diabetic drugs.

INTRODUCTION: Curry leaves (Murraya koenigii) is another Indian medicinal plant, which has enormous traditional values against various diseases and many bioactive compounds have been isolated from this plant 1. Murraya koenigii commonly known as curry leaves belongs to family Rutaceae 2. By combining natural constituent with the novel carrier system is a much better concept in case of diabetes; in which daily dosing regimen is approx of 3-4 drugs 3.

MATERIALS AND METHODS: Crude drug or plant part of Murraya koenigii was collected from agriculture college, Indore. Their identification and authentification were confirmed by the Department of Botany, Holkar Science College, Indore by correlating their morphological and microscopic characters with those given in the literature. The leaves were collected, cleaned well to remove all the dirty material and were shade dried and then powdered transferred into airtight containers with proper labeling for further use. Chloroform, ethanol, methanol, petroleum ether and ethyl acetate were purchased from S. K. Traders, Indore. All solvents were analytical grade.

Petroleum Ether Extract: The coarsely powdered, dried leaves (50 g) were extracted with 300-500 ml petroleum ether by hot extraction process (Soxhlet) for 4 h. After completion of extraction, the solvent was removed by distillation and concentrated in vacuo.

Chloroform Extract: The marc left after petroleum ether extraction was dried and extracted with 300 ml -500 ml chloroform by the hot extraction process (Soxhlet) for 4 h. After completion of extraction, the solvent was removed by distillation and concentrated in vacuo.

Ethyl Acetate Extract: The marc left after the extraction of the chloroform extraction was dried and extracted with 300 ml -500 ml ethyl acetate by the hot extraction process (Soxhlet) for 4 h. After completion of extraction, the solvent was removed by distillation and concentrated in vacuo.

Methanol Extract: The marc left after the ethyl acetate extraction was dried and extracted with 300 ml -500 ml methanol by the hot extraction process (Soxhlet) for 4 h. After completion of the extraction, the solvent was removed by distillation and concentrated in vacuo.

Ethanol Extract: The marc left after the methanol extraction was dried and extracted with 300 ml -500 ml ethanol by the hot extraction process (Soxhlet) for 4 h. After completion of the extraction, the solvent was removed by distillation and concentrated in vacuo.

The above extracts were used for phytochemical studies. The extractive values for each extract were calculated and recorded.

Isolation and Fractionation of Murrayanol: The drug powder was taken in the Soxhlet extractor and was extracted using ethanol for 72 h. After the extraction was over the solvent was recovered by distillation and the residue was concentrated in vacuo. The extract obtained was then stored in a desiccator.

50 gm of the ethanolic extract obtained was suspended in distilled water (200 ml) in small amounts. It was extracted successively and exhaustively with solvents in increasing order of polarity viz. petroleum ether (60-80 °C) (200 ml × 5), solvent ether (200 × 5) and ethyl acetate (200 × 3). Each fraction was washed with distilled water (5 ml), dried over anhydrous sodium sulfate and freed of solvent by distillation. The aqueous remnant was freed of organic solvent by distillation under reduced pressure and then evaporated to dryness on a water bath. The yield of each extract was recorded and subjected to chemical investigation. 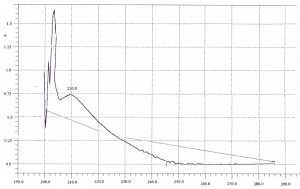 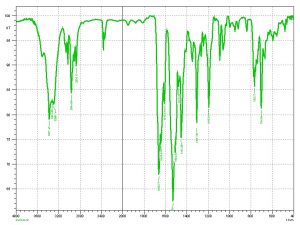 Phytochemical Study of Murraya koenigii: Isolated murrayanol from murraya koenigii showed a melting point at 188 °C which was in agreement with the standard range of 180-189 °C, as reported. The Rf values of isolated and standard murrayanol in several mobile phases are shown in table below:

TABLE 2: COMPARISON BETWEEN THE Rf VALUES OF ISOLATED AND STANDARD MURRAYANOL IN DIFFERENT MOBILE PHASE (TLC)

Pharmaceutical Screening of Active Constituent: All experiments were in agreement with ethical guidelines for investigations of the experimental plant in the conscious animal. The research protocol was approved by the Institutional

Acute Toxicity Study: The acute toxicity study is used to establish the therapeutic index, i.e. the ratio between the pharmacologically effective dose and lethal dose on the same strain and species (LD50/ED50). The animals were divided into four groups and each group consisted of five mice. The defined or fixed-dose level of aqueous and ethanolic extracts (2000 mg/kg) was given orally to identify a dose producing evident toxicity. The animals were observed continuously for 2 h for behavioral, neurological and autonomic profiles. The toxicity signs were observed after 24 h till fourteen days for any lethality or death.

Overnight fasted rats were used for the study.

TABLE 7: EFFECT OF MURRAYANOL ON SERUM LIPID PROFILE IN RATS

Preparation of Particulate System: Microparticles were optimized on the basis of % entrapment, drug content, stirring time and no. of particles formed. The optimized formula used for further work. The solvent evaporation method has been used in which Glyceryl monostearate was dissolved in acetone and ethanol (1:1 v/v) in a water bath at 60 ºC and this was added to aqueous phase (distilled water) under mechanical agitation for 45 min. This was subjected to centrifugation at 4000 rpm for 10 minutes. Resuspended in water which results in formation of solid particles. Finally the microparticles were collected by filtration and are washed with demineralized water.

Particle Size and Shape: Microparticles were visualized under Philips Morgani 268 Transmission Electron Microscope. A drop in the different formulations was placed on different carbon-coated copper grids to leave a thin film on the grids. Then, the film was negatively stained with 1% phosphotungstic acid (PTA) by placing a drop of the staining solution on to the film and the excess of the solution was drained off with a filter paper. The grid was allowed to dry thoroughly and formulations were viewed under a transmission electron microscope and photographs were taken at suitable magnification Fig. 4. 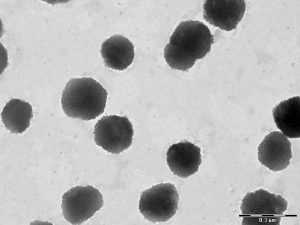 Entrapment Efficiency: 1 g sephadex G-75 was allowed to swell in 10 ml of 0.9% NaCl solution in distilled water in a glass screw-capped bottle for 5 h at room temperature. The hydrated gel was filled to the top in the barrel of 1 ml disposable syringe plugged with the Whatman filter pad. The barrel was then placed in the centrifuge tubes. The tubes were centrifuged at 2000 rpm for 3 min to remove the excess saline solution. Eluted saline was removed from the centrifuge tubes and exactly 0.2 ml of suspension (undiluted) was applied dropwise on the top of the gel bed in the center. Columns were again centrifuged at 2000 rpm for 3 min to expel and remove void volume containing microparticles into the centrifuge tubes. Elute was removed and 0.25 ml saline was applied to each column and centrifuged as previously. The amount of drug entrapped in the particles was then determined by disrupting the particles followed by filtration and subsequent determination of the drug content using spectrophotometric method Table 8. 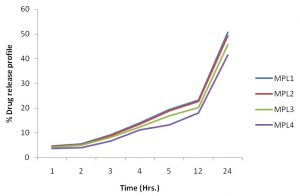 In-vitro Drug Release: 1 ml of pure suspension was placed in a dialysis tube, which in turn was placed in a beaker containing 20 ml of PBS (7.4 pH). The solution containing the dialysis tube was stirred on a magnetic stirrer while keeping the temperature constant at 37 ± 1 °C throughout the study. Samples were withdrawn at different time intervals with subsequent analysis for drug-using Shimadzu 1601 UV spectrophotometer at 210 nm.

RESULTS AND DISCUSSION: Isolated Murrayanol shows an effective decrease in blood glucose level as compared to the standard glibenclamide drug which is tested by animal studies. The drug release pattern also altered with the microparticles prepared by the solvent evaporation method shows improved drug release profile. In-vitro drug release studies show that drug release controlled over a prolonged period of time i.e. after 24 h. 45.7% drug was released, this will also decrease the dosing frequency of active constituent.

CONCLUSION: After the development of polymeric microparticles containing murrayanol shows effective management of diabetes in animals and release also modified because of carrier system which results in zero-order drug delivery in the body. We used drugs of herbal origin which is again a benefit to get rid of the continuous use of synthetic drugs daily, which ultimately gives side effects on the body.

ACKNOWLEDGEMENT: I would like to thank my supervisor and faculties for their support and motivation. I also thankful to S. K. Traders for chemicals and Holkar Science College, Indore for the identification of plants.