ABSTRACT: The aim of the present study was to prepare solid lipid nanoparticles (SLNs) for the topical delivery. Tristearin was used as solid lipid with soya lecithin by using surfactant, Poloxamer 188 (1%) and Tween 80 (0.5%). Solid lipid nanoparticles (SLN) loaded with Flucanazole were prepared by solvent diffusion- emulsification method. The properties of the SLNs such as particle size, zeta potential (ZP), Polydispersity index (PI) and drug % entrapment efficiency (% EE) were investigated. The morphology of SLNs was observed by transmission electron microscopy (TEM) and Scanning electron microscopy (SEM). The drug release behavior was studied by in vitro method using franz diffusion cell with dialysis membrane. The results show the formulation F2 had smallest particle size of 122±3.42 nm with Zeta potential -24.03±1.84 and Polydispersity index 0.668±3.21. The % Entrapment efficiency of formulation F2 was found to be 76.53±0.24. The average particles sizes of the nanoparticles were found to increase on storage, which may be due to aggregation of particles. This effect was encountered lower in the case of formulation stored at 4oC, which signify that aggregation can be regulated by regulating temperature and hence ideal storage condition of SLNs are at 4oC than those stored at 27oC. Fluconazole-SLNs in vitro drug release was conducted in phosphate-buffered saline (pH 7.4) at 37oC. In vitro cumulative % drug release from F2 SLN formulation was found 56 % in PBS (pH-7.4) over 48 h.

However, topical delivery of FLZ resulted in systemic absorption, skin irritation and therefore failed to achieve mycological eradication 2. Therefore, these problems create the poor patient compliance and compromising the efficacy of the therapy. Moreover, the topical administration of bioactives is however a challenging field in drug delivery with the intricacy in controlling and not determining the exact amount of drug that reach the different skin layers. Fluconazole (FLZ) has emerged as the primary treatment option for virtually all forms of susceptible Candida infections in both immunocompetent and immunocompromised hosts. The hydrophobic nature of FLZ poses problems in a suitable topical dosage form for topical delivery 3.

From the recent past, biocompatible lipids have been attracting the attention of the formulation scientist as carrier for the delivery of poorly soluble drugs 4. Among them, lipid nanoparticles formulations with solid matrix have gained huge popularity.

A distinct advantage of solid lipid nanoparticles (SLN) over polymeric nanoparticles is the fact that the lipid matrix is made from physiologically tolerated lipid components, which decreases the potential acute and chronic toxicity 5. SLNs are prepared using solid lipid (i.e., lipids that are solid at room temperature as well as body temperature). These lipids are biocompatible and biodegradable with GRAS (Generally Recognized as safe) status. SLNs are beneficial in many aspects 6, 7 such as;

Nevertheless, polymorphic transition of the lipid may occur with time due to the crystalline structure of solid lipid 8, 9.

The objective of this study was to prepare solid lipid nanoparticles of Fluconazole by using Solvent Diffusion – Emulsification method. Tristearin and Soya lecithin are used as lipids with poloxamer and Tween 80 as surfactants. Fluconazole is a poorly water-soluble drug. The various formulatios were prepared with different ratios of lipids and surfactants. The Particle size, polydispersity index, zeta potential, entrapment efficiency, Transmission Electron Microscopy (TEM), Scanning electron microscopy (SEM) and In- vitro release of Fluconazole loaded solid lipid nanoparticles were investigated.

Preparation of SNLs by Solvent Diffusion- Evaporation method: The Fluconazole loaded SLN’s were prepared according to a modified Solvent Diffusion- Evaporation method 10. In brief, Fluconazole, Tristearin and Soya lecithin were dissolved in ethanol at 60o C. An aqueous phase was prepared by dissolving Poloxamer 188 (1%) and Tween 80 (0.5%) in distilled water and heated to the same temperature of the oil phase. The oil phase was dropped into hot aqueous phase under rapid stirring at 2000 rpm (Remi equipment, India). Then the heating is off and the homogeneous suspension allowed for continuously stirring until the complete ethanol is evaporated. The fluconazole loaded SLN’s were probe sonicated (Qsonica, sonicator Q125, MISONIX sonicators) before centrifuged (Tomy MX-305, high speed refrigerated Micro Centrifuge) at 15000 rpm for 30 min at 4oC. Then the resulting pellet was lyophilized.

Preparation of SNLs by Solvent Diffusion- Evaporation method: In the formulation of Solid lipid nanoparticle tristearin used as solid lipid with soya lecithin. Solid lipid nanoparticles dispersion of Fluconazole was successfully prepared by Solvent Diffusion- Evaporation method. In order to disperse Fluconazole homogeneously with lipids, ethanol was used as the solvent. A rapid stirring was employed to obtain the oil phase before diffusion in hot aqueous phase by dropwise addition using a syringe.

The all formulations are probe sonicated and there is huge decrease in the particle size after sonication the average sonication time is 3.6 mins (data not shown) with amplification 35%. The different formulations were prepared (table 1) using varying ratios of lipids (tristearin and soya lecithin) and surfactants (poloxamer and tween 80). The best formulation was selected after the characterization of formulations.

Poloxamer 188 and tween 80 both of them were used as surfactant with varying concentrations. F2 containing surfactant Poloxamer 188 (1%) and Tween 80 (0.5%) with small particle size of 122±3.42 nm in comparison with other formulations. Particles size decreased as follows: F2 > F3 > F1 > F4. All the formulation within the 250 nm range is given in table 2. 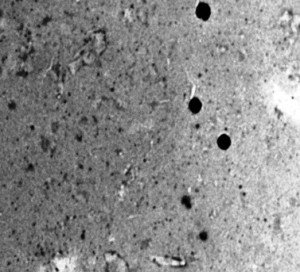 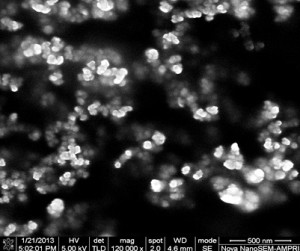 Stability study: The present study is desired to test the stability of fluconazole loaded SLN formulation.Stability test of SLNs was performed in terms of particle size, zeta potential and % entrapment efficiency during storage.

All formulations were stored in screw capped, amber colored small glass bottles at 4±1°C and room temperature. Analysis of the samples was made Average particle size, zeta potential and % Entrapment efficiency after a period of 10, 20, 30, 45 and 60 days.The change in particle size of all formulations was observed at temp 4oC and at 27oC. 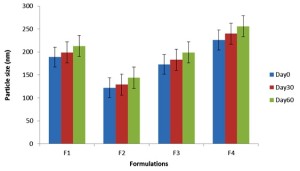 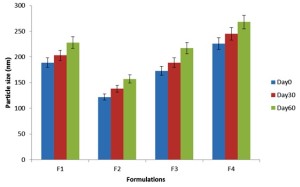 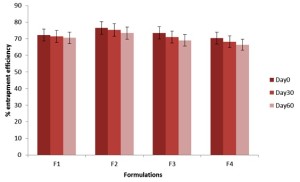 FIG. 5: EFFECT OF STORAGE ON THE % ENTRAPMENT EFFICIENCY AT 4±1°C 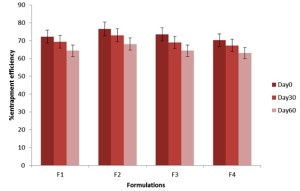 TABLE 4: EFFECT OF STORAGE ON THE ZETA POTENTIAL AT 4±1°C

CONCLUSIONS: The present research work could be concluded as successful development of solid lipid particles of an antifungal drug fluconazole using solid lipid (tristearin) and co-lipid (soya lecithin) by solvent diffusion-emulsification method. The fluconazole loaded SLNs presented a suitable particle size, zeta potential polydispersity index, entrapment efficiency and in vitro drug release. The SEM and TEM images also revealed the formation of SLNs in nano-sized spherical particles with smooth surface. The SLNs were more stable at 4°C then 27°C, the particle size increased more with decrease in entrapment efficiency at 27°C then 4°C.