DEVELOPMENT AND CHARACTERIZATION OF SOLID LIPID NANOPARTICLES OF LINAGLIPTIN

DEVELOPMENT AND CHARACTERIZATION OF SOLID LIPID NANOPARTICLES OF LINAGLIPTIN

ABSTRACT: The main objective of the present research work was to formulate and characterize the linagliptin-loaded solid lipid nanoparticles (SLNs). SLNs possess distinctive characteristics like small and spherical shapes with an average diameter between 1to 100 nm. Linagliptin is used for the treatment of type II diabetes and it is a dipeptidyl peptidase 4-inhibitor and its oral bioavailability is 30%. The application of biopharmaceutical principles to the physicochemical properties of drug substance are characterized with the goal of designing best drug delivery system. The current research work was to enhance the oral bioavailability of linagliptin using the different phospholipids like stearic acid, glyceryl monostearate, cholesterol along with the surfactants like tween 80, span 80, poloxamer1 88, and span 20 by solvent emulsification/solvent evaporation method and solvent emulsification method in order to obtain the best novelty formulation. The prepared formulations have been evaluated for particle size analysis, zeta potential, percentage drug entrapment efficiency, scanning electron microscopy studies, in-vitro drug release kinetics, and stability studies. FT-IR spectra showed the there was no incompatibility between linagliptin and excipients. Formulations containing glyceryl monostearate and surfactants like poloxamer188 showed smaller particle size, greater drug release, and higher percentage entrapment efficiency. The best formulation F10, exhibited 687.2 nm particle size and 99.25% drug release.

INTRODUCTION: The oral route of drug delivery is the most conventional and preferred one. But there are limitations due to a number of factors with respect to the drug and formulation. The major causes include hepatic first-pass metabolism that results in low oral bioavailability and high lipophilicity of the drug, hence hindering the use of oral route of drug delivery. Diabetes mellitus is a chronic and metabolic disorder that results from the lack of insulin secretion, a relative lack of insulin action, and characterized by high levels of blood sugar.

The percent of diabetes occurrence is increasing enormously due to lifestyle and age 1, 2. Presently, several research works are being conducted to find newer ways in the management of diabetes 3. One of the best options is the utilization of nano-medicine in diabetes management, which is the most promising one. Globally, an estimated 422 million adults were living with diabetes in 2014, compared to 108 million in 1980.

The global prevalence (age-standardized) of diabetes has nearly doubled since 1980, rising from 4.7% to 8.5% in the adult population, depicting 8.3% of the world population, and the number is expected to surge to 592 million by the year 2035 4, 5. Solid lipid nanoparticles (SLNs) are the colloidal drug carrier systems that contain solid lipid particles dispersed in 10 to 1000 nm size range. SLNs were found to have applications in oral, intramuscular, intravenous, ophthalmic, dermal, rectal, and other modes of administration 6. SLNs have been declared to blend the advantages of various other colloidal systems like fat emulsions, polymeric nanoparticles, micelles, and liposomes while evading their limitations concurrently. Few of the anticipated advantages by means of solid lipid nanoparticles include increased oral bioavailability of poorly aqueous soluble drugs, improved stability of drugs, targeted drug release, controlled release of drugs, the greater payload of drugs, reduced toxicity, and negligible use of organic solvents as well as ease of scale-up for the large scale production 7.

Fourier Transform Infra-Red (FT-IR) Analysis 9: An FT-IR spectrophotometer was utilized for the infrared analysis of the samples. Around 4-5 mg of sample was properly mixed with dry potassium bromide, and then the sample was analyzed over wave numbers ranging from 4000 - 400 cm-1 at transmission mode.

Calibration of Standard Curve of Linagliptin:

Determination of Wavelength: Primary stock solution was prepared by dissolving 10 mg of linagliptin pure drug in 10 ml of ethanol. 1 ml was taken from the primary stock solution into a 10 ml volumetric flask, and then the volume was adjusted to 10 ml with phosphate buffer solution pH 7.4 (secondary stock: 100 μg/ml). 1 ml was taken from the secondary stock solution, and volume was made up to 10 ml with phosphate buffer solution pH 7.4 (working stock: 10 μg/ml). The final concentration solution prepared was scanned between 200 nm - 400 nm using UV–visible spectrophotometer on spectrum mode in order to determine λmax of linagliptin.

Preparation of Standard Graph of Linagliptin in Phosphate Buffer Solution pH 7.4: Aliquots of secondary stock solution were taken, and volume made up to 10 ml with pH phosphate buffer solution 7.4 to obtain the concentrations of 1 μg/ml, 2 μg/ml, 3 μg/ml, 4 μg/ml and 5 μg/ml concen-trations, respectively. The solutions prepared were subjected to UV–visible spectrophotometric analysis at the determined λmax for linagliptin utilizing phosphate buffer solution, pH 7.4 as blank. The calibration curve was constructed by taking concentration on X-axis and absorbance on Y-axis. The regression equation and correlation coefficient were determined.

Solvent Emulsification / Evaporation Technique 10, 11: Solid lipid nanoparticles of linagliptin were fabricated by solvent emulsification/evaporation technique. Accurately, a weighted amount of linagliptin was dissolved in methanol. Lipids used, such as cholesterol, stearic acid, were first warmed to 75 ºC. Drug and excipient proportions were taken as depicted in Table 1. The surfactants were added to the water under constant stirring and allowed to equilibrate to 75 ºC. Aqueous surfactant solution was added to the molten lipid and once again allowed to equilibrate at 75 ºC. The organic solvent mixture was completely evaporated at 70 ºC using a rotary evaporator (ROTALAB, Lab India). Drug entrapped lipid layer was subsequently poured into 100 ml of aqueous solution containing surfactant at 70 ºC using a magnetic hot plate and homogenized for 10 min at homogenization speed of 25,000 rpm using a high-speed homogenizer (IKA). Then, the suspension was allowed to cool at room temperature. The obtained SLNs dispersion was freeze-dried using a freeze dryer (IlshinÒ Lab Co. Ltd., India) for 24 h at −50 ºC temperature and pressure below 15 Pascal.

Solvent Emulsification Method 12: Six formulations of linagliptin-loaded solid lipid nanoparticles were made using different surfactants and lipids in different ratios shown in Table 2. The drug and lipid solution is dissolved in methanol and chloroform. The organic solvents mixture gets evaporated using a rotary evaporator at 70 °C. The organic solvent mixture gets evaporated & purging with nitrogen gas to remove traces of organic solvent. Drug entrapped lipid layer poured into 100 ml of an aqueous solution containing surfactants like poloxamer 188 at 70 °C using a hot plate and homogenized for 10 min at homogenization speed of 25,000 rpm using ultra turrax.

Suspension was cooled at ice bath for 10 min and SLNs dispersion then subjected to lyophilization for 24 h at -50 °C and pressure below 15 pascals.

Characterization of SLNs of Linagliptin:

Zeta potential was estimated on the basis of electrophoretic mobility under an electric field. The samples were diluted with distilled water before measurement and measured at a fixed angle of 165° at 25 ºC for the particle size analysis.

For zeta potential measurement, samples were diluted with distilled water.

Drug Entrapment Efficiency 15: The entrapment efficiency of the drug was determined by measuring the concentration of free drugs in the dispersion medium. 10 mg of freeze-dried SLNs of linagliptin was dissolved in aliquot volumes of phosphate buffer pH 7.4 and then filtered utilizing 0.45 μm membrane filters.

Absorbance of the filtered solutions were recorded by UV-visible spectrophotometer at 228 nm (Lab India). The percentage entrapment efficiency (% EE) was calculated by using the following formula:

Shape and Surface Morphology 16, 17: The shape and surface morphology of the optimized freeze-dried linagliptin-loaded SLNs formulation was studied by scanning electron microscopy (SEM).

SLNs dispersion equivalent to 5 mg of linagliptin drug was then filled into the dialysis membrane bag & tied at both ends, and kept in a beaker consisting 100 ml of phosphate buffer solution pH 7.4. The speed and temperature were maintained at 100 rpm and 37 ± 2 ºC, respectively, using magnetic stirrer.

The samples were withdrawn at predetermined time intervals, and similar volume was simultaneously replaced with the fresh buffer solution in order to maintain the sink conditions.

The samples were analyzed at 228 nm using a UV-visible spectrophotometer. Cumulative % release was further calculated from the amount of linagliptin drug release.

The drug release kinetics were determined for the best formulation by following kinetic equations like zero-order (cumulative % release vs. time), first-order (log % drug remaining vs. time).

The values of ?2 were calculated from the linear curve obtained by regression analysis of plots. For the Korsmeyer-Peppas model, the value of n was computed.

Stability Studies 19, 20: The stability studies of the best SLNs formulation were performed by storage at 30 ºC ± 2 ºC / 65% ± 5% RH for 90 days and were examined at periodic time intervals for the changes in particle size and % entrapment efficiency.

Drug Excipients Compatibility Studies: The interaction studies were carried out to ascertain any kind of interaction of drug with the excipients used in the preparation of solid lipid nanoparticles.

From the FT-IR spectra, it was revealed that there was no chemical interaction of the pure drug linagliptin with excipients used in the formulation of SLNs.

Inference: FT-IR studies were performed to check the possible interaction between chosen drug - linagliptin; and other ingredients used in the formulation of SLNs.

The standard concentration was scanned over a range of 400 nm – 200 nm which resulted in a peak at the wavelength of 228 nm, and it was considered as absorption λmax for linagliptin. 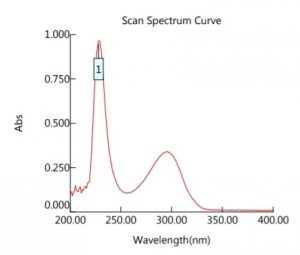 The  calibration curve of linagliptin in phosphate buffer solution pH 7.4 was constructed by making the solutions of 1 µg/ml, 2 µg/ml, 3 µg/ml, 4 µg/ml and 5 µg/ml. The absorbance of the solutions was measured by using UV-visible spectrophotometer at the λmax of 228 nm.

The calibration graph was plotted by taking the concentrations on X-axis and absorbance on Y-axis.

Linagliptin concentration and absorbance followed a linear relationship, and the correlation coefficient (R2) value in phosphate buffer solution pH 7.4 was observed to be 0.999, as depicted in Table 3 & Fig. 7. 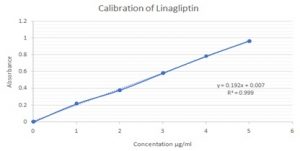 Characterization of SLNs of Linagliptin:

Drug Entrapment Efficiency: The percentage of drug entrapment was found to be variable in the range of 40.2% to 76.2%. The % EE was observed to be higher for SLNs formulations prepared with glyceryl monostearate and poloxomer 188 combinations (i.e., SLNs formulations F10 to F12) as depicted in Tables 6 & 7. It has been observed that linagliptin-loaded SLNs formulation F10 showed higher % EE, i.e., 76.2% in comparison with other formulations.

Shape and Surface Morphology: The shape and surface morphology of the best formulation F10 was studied by using scanning electron microscopy. The SEM micrograph revealed that the particles were found to be spherically shaped with a smooth surface, as shown in Fig. 8. 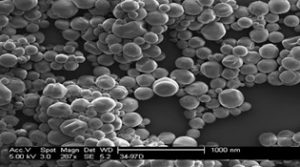 Kinetics of Drug Release: From results obtained, kinetics of linagliptin release from the best linagliptin SLNs formulation developed by solvent emulsification method is shown in Table 10. 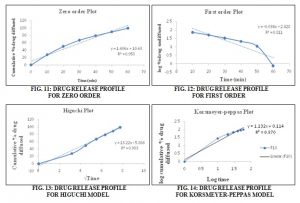 Stability Studies: The stability studies were carried out at 30 ºC ± 2 oC / 65% ± 5% RH for 90 days and were examined at periodic time intervals for the changes in particle size and % entrapment efficiency.

The stability testing after 90 days led to the conclusion that there was negligible difference observed in the particle size and % entrapment efficiency of linagliptin SLN formulation stored for 90 days.

CONCLUSION: Linagliptin solid lipid nano-particles were prepared by solvent emulsification / solvent evaporation and solvent emulsification method. It can be concluded that the developed solid lipid nanoparticles of linagliptin using glyceryl monostearate and poloxamer 188 shown a higher percentage of drug release and could enhance the oral bioavailability, which has to be further confirmed with in vivo studies. Solid lipid nanoparticles could be one of the alternative approaches to other colloidal drug delivery systems and tablets in order to enhance the bioavailability of the drugs.

ACKNOWLEDGEMENT: The authors are thankful to the Management of Chalapathi Educational Society, Guntur for providing the necessary facilities to carry out the research work.