Categories Menu
Home » DEVELOPMENT AND CHRACTERIZATION OF SELF ASSEMBELED NANOPARTICLES: A REVIEW

ABSTRACT:Various types of lipid based vesicular systems have been developed in controlled and targeted drug delivery. Self assembled nanoparticles (SAN) has advantages over traditional colloidal vesicular systems and also avoids some of their major disadvantages. SAN made of solid lipids are submicron colloidal carriers (50-1000nm). These consist of a solid hydrophobic core having a monolayer of phospholipid coating. The solid core contains drug dissolved or dispersed in the solid high melting fat matrix. The hydrophobic chains of phospholipids are embedded in the fat matrix. The outstanding characteristic of SAN is that they are nearly or wholly composed of ampiphillic prodrug. Serious drawbacks of the drugs could be effectively circumvented by covalent linkage of the drug to fatty acids. These lipidic prodrugs, if provided with some surface active property, tend to form supramolecular assemblages in aqueous media.  They provide an efficient method for delivery of drugs directly to the targeted site, leading to reduction of drug toxicity with no adverse effects and also reduces the cost of therapy by  imparting better  biopharmaceutical properties to the drug, resulting in improved bioavailability, especially in case of poorly soluble drugs. This articles reflects the various types of drug carrier systems and various method of preparation of self assembeled nanoparticles and also characterized the SAN for different attributes.

INTRODUCTION:An ideal controlled drug delivery system should posses’ two characteristics: the ability to reach the therapeutic index target and the ability to release the active pharmaceutical ingredient in a controlled manner 1. Solid lipid nanoparticles (SLN), has advantages over the traditional colloidal systems and avoids some of their major disadvantages 2. Drug targeting will ensure high therapeutic efficacy. But maybe even more important it will reduce side effects 3. Various systems including liposomes, niosomes microspheres, virosomes, microemulsion, transfero-somes, monoclonal antibodies, erythrocytes have demonstrated their potential for application in effective drug delivery.

The vesicular system (liposomes, niosomes & Transferosomes) has more advantageous in controlled drug delivery 4. These vesicles were first reported in 1965 by Bingham, and were given the name “Bingham bodies” which play a major role in modelling biological membranes, and in the transport and targeting of active agents 5.

Vesicular drug delivery system has some of the advantages like:

But these conventional vesicular system have some  problems such as particulars ( liposomes nanoparticles, microemulsions) and externally triggered (e.g. temperature, pH, or magnetic sensitive) carriers load drugs passively, which may lead to low drug loading efficiency and drug leakage in preparation, preservation and transport in vivo 7. Some vesicular system associated problems are mentioned in table

A potential solution for these problems is the use of self assembled nanoparticles (SAN) i.e., the pharmacosomes 9. The outstanding characteristic of SAN over common nanoparticles or liposomes is that they are nearly wholly composed of amphiphilic prodrugs, so that high drug-loaded amount and very low drug leakage are archived easily. In addition, the amphiphilic monomers of SAN would like to permeate biomembranes of targets provided that SAN were decomposed on target surfaces. Pharmacosomes can be considered as one of SAN based on the various theories 10. Pharmacosomes are like a panacea for most of the problems associated with liposomes, transferosomes, niosomes, and so forth. They are an efficient tool to achieve desired therapeutic goals such as drug targeting and controlled release 9.

Pharmacosomes: They are the colloidal dispersions of drugs covalently bound to lipids. Depending upon the chemical structure of the drug–lipid complex they may exist as ultrafine vesicular, micellar, or hexagonal aggregates. As the system is formed by linking a drug (pharmakon) to a carrier (soma), they are termed as “pharmacosomes” 11. They are an effective tool to achieve desired therapeutic goals such as drug targeting and controlled release. Any drug possessing an active hydrogen atom (-COOH, -OH, -NH2, etc.) can be esterified to the lipid, with or without spacer chain that strongly result in an amphiphilic compound, which will facilitate membrane, tissue, or cell wall transfer, in the organism.

The criterion for the development of the vesicular pharmacosome is dependent on surface and bulk interactions of lipids with drug 12. These amphipathic prodrug mesogens may serve as building blocks by participating in supramolecular assemblages and thus acquire a colloidal state 13. The prodrug conjoins hydrophilic and lipophilic properties (thereby acquiring amphiphilic characteristics), reduce interfacial tension, and, at higher concentrations, exhibit mesomorphic behavior 8. Because of a decrease in interfacial tension, the contact area increases, therefore increasing bioavailability 14.

Advantages of Pharmacosomes over Liposomes 16:

Carriers are also used in designs to increase the effectiveness of drug delivery to the target sites of pharmacological actions 17. The Therapeutic uses of a variety of drug carrier systems have significant impact on the treatment and potential cure of many chronic diseases, including cancer, diabetes mellitus, psoriasis, parkinsonism, Alzheimer, rheumatoid arthritis, HIV infection, infectious diseases, asthma, and drug addiction. Scientific efforts in these areas are multidisciplinary, involving the physical, biological, medical, pharmaceutical, biological materials, and engineering fields 18.

In recent years, the interest in micron and submicron systems (i.e. nanosystems) in pharmacy has surged. This is in part due to the advantages these systems may provide over existing systems. Designing drug delivery system is challenging in terms of targeting the drug to specific sites. Certain chemicals or therapeutic agents that show success in vitro fails to produce the same effect in the human body because of the limitation to target the designated area, as a result, high concentration are given to patients resulting in more intense side effects. While asking for a better and more targeted drug system in therapy, a pharmaceutical scientist come across some time very often i.e. vesicular, colloidal, niosomal, microparticulate, nanoparticulate and lipid based submicron system. Depending on certain dosage form the above term could be coined alone or in conjugation with other terms to a particular system.

Dosage forms which confirm themselves as surfactant spherical vesicles are often known as vesicular system. Micron system comes range of um and submicron in nm. Typically a colloid is an intermediates size between molecular range and coarse range. Colloidal carriers are small particles of 100-400 nm in diameter, suspended in aqueous solution. These micro, nano, vesicular, colloidal, and lipid based carriers have the advantages of easy administration and efficiency over their long residence time, better targeting etc 19.

Need of Vesicular, Colloidal, Micro and Nanocarriers: Development of these carriers is a novel area of science that provides, with a new hope, the tools and technology to work at atomic, molecular and supramolecular levels leading to creation of devices and delivery systems with fundamentally new properties and functions. The carrier offers a number of advantages making it an ideal drug delivery vehicle.

Some types of carrier based dosage forms: 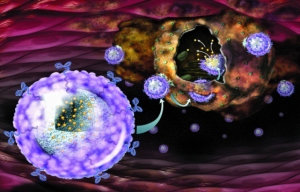 According to their size, liposomes are known as small unilamellar vesicles (SUV) (10-100 nm) of Large Unilamellar vesicles (LUV) (100-300 nm). If more than one bilayers are present, then they are referred to as Multilamellar Vesicles (MUV). Liposomes are formed when thin lipid films or lipid cakes are hydrated and stacks of liquid crystalline bilayers become fluid and swell. During agitation hydrated lipid sheets detach and self associate to form vesicles, which prevent interaction of water with the hydrocarbon core of the bilayer at the edges 31. 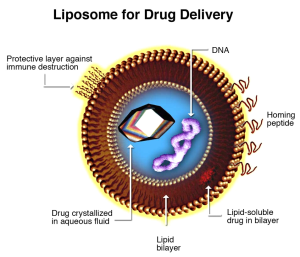 Preparation:  Two methods are mainly employed to preparepharmacosomes. They are:

Hand-shaking method: In the hand-shaking method, the dried film of the drug–lipid complex is deposited in a round-bottom flask and upon hydration with aqueous medium, readily gives a vesicular suspension.

Ether-injection method: In the ether-injection method, an organic solution of the drug–lipid complex is injected slowly into the hot aqueous medium, wherein the vesicles are readily formed. At low concentration the amphiphiles exists in the monomer state. Further increase in monomers may lead to variety of structures i.e., micelles of spherical or rod like or disc shaped type or cubic or hexagonal shape.

Mantelli et al., compared the effect of diglyceride prodrug on interfacial tension, with the effect produced by a standard detergent dodecylamine hydrochloride, and found similar effect on lowering of surface tension. Above the critical micelle concentration (CMC), the prodrug exhibits mesomorphic lyotropic behavior, and assembles in supramolecular structures 44, 45.

Other Approaches: Another approach for producing pharmacosomes was recently developed in which a biodegradable micelle forming drug conjunct was synthesized from the hydrophobic drug adriamycin and a polymer composed of polyoxyethylene glycol and polyaspartic acid. This method has the benefit that although it may be possible to dilute out the micelle, the drug will probably not precipitate because of the water solubility of the monomeric drug conjunct 46.  There are various methods like emulsion precipitation, melt homogenization and thin layer ultrasonication technique are also used to prepare the pharmacosomes. Scientist prepared the pharmacogel of propranolol hydrochloride by constructing the three component phase diagram 47.

Approaches have been done to attach drugs to various glyceride-like groups, and the resulting amphiphilic molecules have been spontaneously dispersed. They were labelled pharmacosomes because of their tendencies to form unilamellar vesicles. It was suggested that these molecules should enhance lymph transport 48.

Characterisation: The prepared prodrugs are generally characterized for their structural confirmation (by IR, NMR spectrophotometery, thin layer chromatography (TLC), melting point determination), partition coefficient, surface tension, and prodrug hydrolysis 49, 50. Yang et al., found that CDP-diacyl prodrug initially forms large vesicles, which diminish in size and finally form micelles. They shows that slow kinetics are essential requirement for phospholipid on biomembrane in order to confer stability to the lipid bilayer and prevent the rapid exchange of lipids between membranes of living cells, the phase transition temperature of pharmacosomes in the vesicular and Micellar state could have significant influence on their interaction with membranes.

CONCLUSION: Vesicular systems have been realized as extensively useful carrier systems in various scientific domains. In spite of certain drawbacks (fusion, aggregation), pharmacosomes still play an important role in the selective targeting, and the controlled delivery of various drugs. Pharmacosomes have immense potential, and further advantages of the vesicular system can be exploited by expanding this approach to additional drugs. The influence of spacer groups and linkage also should be observed more rigorously for further improvement in drug-fate and biological activity of the drug to achieve the therapeutic goal. The system yet requires greater efforts towards investigating the non-bilayer phases and exploring the mechanism of action. Current research trends are generally based on using different approaches like pegylation, biotinyzation etc. for cellular targeting.