Antibiotics are not chemically stable in water based oral pharmaceutical suspensions. Anhydrous liquid antibiotic suspension for oral administration provides a product having good shelf life and taste characteristics relative to conventional liquid formulations. A ready to use oil based cefpodoxime proxetil preparation which can be stored at room temperature was prepared and evaluated for its organoleptic properties, viscosity, flow behavior and accelerated physical and chemical stability. The formulation showed improved redispersibility, good taste masking of the bitter drug and allows the product to be stored longer preventing hydrolysis of the drug.

INTRODUCTION: The aim of the present study is to provide a ready to use oil based, liquid antibiotic suspension for oral administration having good shelf life and taste characteristics relative to conventional dry syrup formulation. Presently available water degradable antibiotic suspensions generally are packaged as dry powders which require reconstitution with a diluent and must be refrigerated after reconstitution to maintain the potency of the active ingredient over the recommended course of therapy.

Storage problems with such antibiotic formulations result from their having a short shelf life. The unused portion is discarded after fourteen days. Non-aqueous suspensions 1 of orally-active medications can be produced which are extremely palatable, have a smooth consistency, and are "ready-to-use", i.e., do not require reconstitution, and need not be refrigerated to maintain the potency of the active ingredient.

Preparation: Cefpodoxime proxetil oil based suspension, equivalent to Cefpodoxime 100mg/5ml was prepared according to the formulae F1 and F2 given in the Table 1.

The preservatives and antioxidants were dissolved in oil at 45°C and then colloidal silicon dioxide was added under stirring. Other excipients (passed through 80# sieve) and the drug were dispersed and volume made up with the vehicle.

All the quantities expressed are in g/100ml

Where Hu = ultimate height of the sediment

The larger this fraction, the better is the suspendability. The height of the sediment was noted at particular time intervals. The Hu/Ho ratios were obtained and plotted as ordinates with time as the abscissa. Formulations with aerosil at different concentrations were evaluated for the sedimentation behavior.

Particle Size: The properties of a liquid oral suspension of active substance are greatly influenced by the particle size of the suspended active substance. It was measured by microscopy.

Ease of redispersibility as such, after freeze-thaw cycling and after centrifugation 2: Twenty milliliters suspension samples were subjected to 3 cycles of 4°C & 30°C each of 24 hours and assessed for their physical instability like phase separation and caking. Similar samples were subjected to centrifugation at 4000 rpm for 30 mins. Ease of redisdispersibility was checked by inverting the tubes through 180°.

Rheological studies: Rheologic methods can help in determining the settling behavior of the suspension. Brookfield viscometer with variable shear stress control can be used for evaluating viscosity of suspensions.

A Brookfield digital rotational viscometer (Brookfield Engineering Laboratories, Model DV-E) equipped with spindle (No. LV 62) was used to measure the viscosities in centipoise of the suspension prepared. The measurement was done at ambient temperature. Viscosities were determined in triplicate. Suspensions were poured in to a 100ml glass beaker and the spindle was lowered perpendicularly. The spindle was rotated in the suspension at increasing shear rates 10, 20, 30, 50 and 60 rpm. At each speed, the corresponding dial reading was noted. The reverse readings were also noted and average was taken for these two readings.

The suspension was also studied for Viscosity vs. time profiling at 20 RPM to predict the gelling behavior.

Moisture content determination by Karl Fischer Analysis: As the suspension was prepared with no added water, the amount of the water in the starting material had to be taken into account when analyzing the results. The water content of the suspension was determined by a Karl Fischer titrimetry (Mettler DL35, Mettler-Toledo). All the measurements were performed in triplicate.

In vitro dissolution test: The dissolution studies were performed using a US Pharmacopeia XXIV type II dissolution test apparatus. The samples equivalent to 100 mg Cefpodoxime Proxetil were placed in a dissolution vessel containing 900 mL of phosphate buffer (pH 6.8±0.05) having 0.75% SLS  maintained at 37.0±0.5°C and stirred at 100 rpm. A 5mL aliquot was withdrawn from the dissolution medium at predetermined intervals of 1 hour period; at each interval, the withdrawn medium was replaced with blank dissolution medium. Drug release was then analyzed by measuring the absorbance through a spectrophotometer (UV 150-02, Shimadzu Corporation, Kyoto, Japan) at wavelength 259 nm after suitable dilution. Samples were collected periodically and replaced with a fresh dissolution medium.

Stability studies: Stability of the selected suspension was monitored at 40°C/75%RH, 30°C/60%RH for a period of three months in amber colored glass bottles with screw cap. The formulations were visually inspected for appearance, sedimentation and evaluated for moisture content, drug content and viscosity (Brookfield Viscometer, No. 62 LV spindle at 10 RPM).

Sedimentation volume and rate: The plot of Hu/Ho ratios against time will at time zero start at 1.0, with the curve then being either horizontal or gradually sloping downward to the right as time goes on. One can compare different formulations and choose the best by observing the lines, the better formulations obviously producing lines that are more horizontal and/or less steep. From Fig. 1 it is seen that the formulation with 1.5% aerosil has least slope value. Hence it was chosen for further studies. Also the suspension with 1% aerosil had a thin consistency and showed quicker settling.

Rheological studies: This suspension exhibits pseudo plastic viscosity of the permanent suspension (Fig.2) where a decrease in viscosity was observed with increase in shear rate (rpm). The up curve and the down curve overlap each other showing no immediate thixotropic nature. This suspension has a viscosity of 1557 centipoise (Brookfield Viscometer, No. 62 LV spindle at 10 RPM). The slope of the line in Fig.3 is not a line curve and is not flattened out therefore it can have a tendency to gel over storage period. Thus the suspension exhibited thixotropic and pseudoplastic nature. 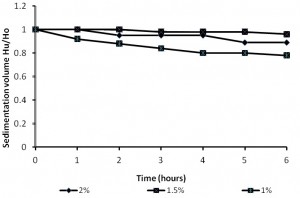 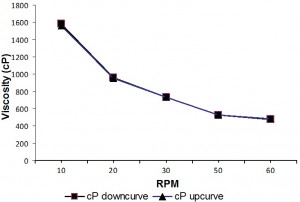 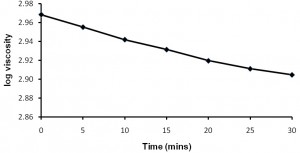 Moisture Content: The initial moisture content of the selected 1.5% aerosil containing suspension was 0.55%w/v. Since the suspension contains less than about 0.8%w/v moisture, it can be termed as ‘anhydrous’.

In vitro test of dissolution: The dissolution profile shows 60% release at the end of 60mins (Fig.4). The release profile in vivo could be very much different, the oil used in the formulation may facilitate the transport of the drug substance across the intestinal membrane and further improve the absorption of drugs in vivo apparently due to digestion of the oil and subsequent solubilization of the drug 4.

FIG. 4: DISSOLUTION PROFILE OF CEFPODOXIME READY TO USE SUSPENSION

Stability studies: The suspension showed increase in color intensity and development of oily odor at accelerated condition of 40°C/75%RH. This odor was easily masked with pineapple and peppermint flavors. There was no change in particle size at all the conditions of the stability (Table 2). A significant increase in viscosity at accelerated temperature was observed. The drug content and moisture content was found to remain constant throughout 3 months interval at both the conditions studied.

TABLE 2: RESULTS OF STABILITY STUDIES OF CEFPODOXIME PROXETIL READY TO USE SUSPENSION 100mg/5ml AT 3 MONTHS INTERVAL

CONCLUSION: The drug in the oily vehicle does not settle forming a cake and shows significantly improved stability in the ready to use suspension form. Cefpodoxime Proxetil is a prodrug; which is orally absorbed cephalosporin with only 50% absolute bioavailability. Further study is needed to improve the bioavailability by the inclusion of pharmaceutically acceptable surfactants.