INTRODUCTION: Amelioration of patient compliance and effectiveness of the therapy is the pivotal motif behind the design of ‘Dissolve in the mouth dosage form’. These are the dosage form, which will dissolve in the mouth without the requirement of water. This system is recognized with other synonyms like fast dissolving tablets; melt in mouth tablets, porous tablets, rapidly disintegrating tablets, quick dissolving, and rapimelt tablets. Despite various nomenclatures the function and concept of all these Drug Delivery System (DDS) is similar.1 – 5

Dysphasia or difficulty in swallowing of the most popular dosage form like tablets and capsules is the major problem occurring in geriatric and pediatric patients, which leads to patient non-compliance.6 Salbutamol Sulphate which is β2 receptor agonist widely used as bronchodilator to relieve acute as well as chronic attacks of asthma was selected as drug candidate as it is not available in such a dosage form 8, 9. The aim of this study was to develop such NDDS for Salbutamol Sulphate by simple and cost effective direct compression technique.

Thus, melt-in-mouth DDS are fast dissolving/ dispersing DDS, which dissolve in patient’s mouth within a few seconds without the requirement of water, or chewing, providing best remedy for the patients suffering from dysphasia. Some drugs are absorbed from mouth, pharynx and esophagus as the saliva passes down the stomach. In such cases the bioavailability is greater than those observed for conventional dosage form. The advantages of mouth dissolving dosage form are increasingly being recognized in both industry and academia. Their growing importance was underlined recently when European pharmacopoeia adopted the term “Orodispersible Tablet” as tablet that is to be placed in mouth where it disperses rapidly before swallowing.1 - 7

Formulation Design: The tablet consisted of Salbutamol Sulphate (4 mg), mannitol, Sodium saccharin, flavors, magnesium stearate and various concentrations of microcrystalline cellulose (PH102) and superdisintegrant (2%,3%,4%.5%). The weight of tablets in each batch was kept constant 10- 12. Effect of variables like types of superdisintegrant, concentration of superdisintegrant on various tablet properties and in-vitro dissolution characteristics were studied and discussed.

Preparation of mixed blend of drug and excipients: All ingredients were passed through sieve no. 40. Required quantities of ingredients were taken for particular formulation and using laboratory mixer and the blend was mixed.

Evaluation of Mixed Powder Blend of Drug and Excipients:

Angle of repose: It is the maximum angle that can be obtained between the freestanding surface of a powder heap and horizontal plane. Such measurement gives at least a qualitative assessment of internal cohesive and frictional effects under low levels of external loading, as might apply in powder mixing or in tablet die or capsule shell filling operation 13. Angle of repose was determined by using funnel method. Powder was poured from a funnel that can be raised vertically until a maximum cone height, H was obtained. Diameter of heap, D, was measured. The repose angle calculated by formula;

Bulk density: Apparent bulk density was determined by pouring pre-sieved (40 sieve) bulk drug into a graduated cylinder via a large funnel and measuring the volume and weight “as it is” 13.

Tapped density: It is determined by placing a graduated cylinder containing a known mass of drug or formulation on mechanical tapping apparatus, which is operated for a fixed number of taps until the powder bed volume has reached a minimum13. Using the weight of drug in cylinder and this minimum volume, the tapped density may be computed.

Porosity: Ratio of total volume of void spaces to (Vv) to the bulk volume of material is often selected to monitor the progress of compression. This ratio Vv/ Vb is referred to as porosity.

Frequently, porosity is expressed as percentage 14.

Powder flow properties: One of the ways of measurement of free flowing ability of powder is compressibility.

Weight variation: With a tablet designed to contain a specific amount of drug in a specific amount of formula, the weight of a tablet being made is routinely measured to ensure that a tablet contains proper amount of drug15. First weight of 20 tablets was determined. From that average weight was calculated. Then individual tablets were weighed and the individual weight was compared with an average weight.

Hardness and Friability: Using tablet hardness tester, hardness of the tablet was checked. Using Roche Friabilator friability of the tablet was checked. This device subjects tablets to the combined effect of abrasions and shock by utilizing a plastic chamber that revolves at 25 rpm dropping the tablets at distance of 6 inches with each revolution. Pre weighed sample of 10 tablets was placed in the Friabilator, which was then operated for 100 revolutions. Tablets were dusted and weighed 16. The friability was determined using following formula:

Water Absorption Ratio: A piece of tissue paper folded twice was placed in a small Petri dish containing 6 ml of water. A tablet was put on the tissue paper and allowed to completely wet. The wetted tablet was then weighed. Water absorption ratio, R, was determined using following equation 17:

Where, Wb = Weight of tablet before water absorption

Uniformity of Content: The test is applicable for tablets that contain less than 10 mg or less than 10% w/w of active ingredients.  The test for uniformity of content should be carried out only after the content of active ingredient in a pooled sample and tablets has been shown to be within acceptable limits of the stated content 19. Ten tablets were taken and their content was determined by UV spectrophotometer.

RESULT AND DISCUSSION: All the batches were prepared by direct compression techniques using various superdisintegrants in different concentrations as was seen in Table 1. Ac-Di-Sol, Polyplasdone-XL, Primojel were used as superdisintegrating agents, microcrystalline cellulose PH-102 was used as diluents, which is also a superdisintegrants.

For each designed formulation, blend of drug and excipients was prepared and evaluated. As shown in Table 2, Angle of Repose was found in range of 9.4 to 20.180 while % compressibility value were ranged in 10.78 to 16.66 %, Porosity, which was ranged between 10 to 16.67% was found to increase with increase in concentration of superdisintegrants. Also all formulations have shown good flowability.

TABLE 2: EVALUATION OF MIXED BLEND OF DRUG AND EXCIPIENTS (N=3)

Tablets were prepared by direct compression technique. Hardness of all tablets was between 3.0- 3.5 kg/cm2 while friability and weight variation test result were found within acceptable limits. Also all tablets passed the uniformity of content test. Water absorption ratio was in the range of 60.2 to 110.1 %, as shown in Table 3. Ac-Di-Sol is made by cross-linking (etherification) reaction of Sodium CMC. This cross linking greatly reduces water solubility of Sodium CMC while permitting material to swell and absorbs water many times its weight without losing fiber integrity21. Due to this it was found that as concentration of Ac-Di-Sol increased water absorption ratio was also increased, and highest than formulation prepared with other superdisintegrants. Tablet prepared by using Ac-Di-Sol as superdisintegrant were found to have more water absorption ratio and hence both in vitro and in vivo disintegration time for all formulations was very less it was between 7 to 25 seconds, as shown in Table 3.

As there is not any specific dissolution test available for mouth dissolving tablets, dissolution rate was studied as per USP specification for conventional tablets. For all formulations, the tablets show about 70 – 100 % drug release in 2 - 4 minutes as shown in Table-3 and Fig.1. While conventional marketed tablets required around 25 minutes for same amount of drug to be released Fig.2. 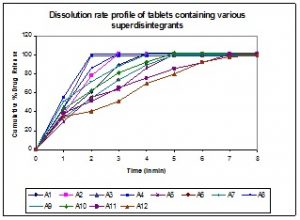 FIG.1. DISSOLUTION STUDY OF DESIGNED FORMULATIONS (A1 - A12) 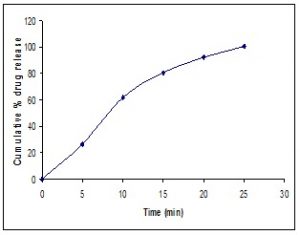 CONCLUSION: Hence, on the basis of above results it was concluded that with increase in concentration of superdisintegrants disintegration time decreases in Ac-Di-Sol, and Polyplasdone-XL while increases in Primojel due to formation of viscous plug on swelling. Dissolution time for Ac-Di-Sol is shortest among these superdisintegrants, followed by Polyplasdone-XL then Primojel.