Drinking water plays a significant role in the swallowing of oral dosage forms. Patients face inconvenience swallowing the tablet dosage forms when there is the unavailability of drinking water, in case of kinetosis (motion sickness) and sudden coughing episodes during the allergic condition, common cold and bronchitis 1.

Hence, tablets that can disintegrate or dissolve rapidly in the oral cavity have gained more attention. Such tablets may also be suitable for active patients. Fast-dissolving tablets are also called melt-in-mouth, mouth-dissolving, quick-dissolving, orodispersible, etc. 2. Allopurinol is a xanthine oxidase inhibitor and the most commonly used medication for the treatment of gout. Allopurinol is a bicyclic structure consisting of a pyrazole ring fused to a hydroxyl-substituted pyrimidine ring. It is used as a gout suppressant and radical scavenger. Allopurinol belongs to BCS Class II as the drug is slightly soluble in water 3.

The current research investigation is mainly focused on the formulation and evaluation of fast-dissolving tablets of an antigout drug, allopurinol. Several batches of the fast-dissolving tablets of allopurinol solid dispersion were prepared by sublimation using various subliming agents (camphor & ammonium bicarbonate) and superdisintegrants (sodium starch glycolate & crospovidone) in various compositions to achieve rapid release of allopurinol from tablet dosage forms.

Preformulation Studies: Pre-formulation study is the initial step in the rationale development of the dosage forms and involves an evaluation of physico-chemical characteristics of a drug substance alone and in combination with additives used in formulation4. Such studies include the determination of colour, taste, odour, solubility determination, melting point & compatibility among the ingredients used in formulations.

Fourier Transform Infra-Red (FT-IR) Analysis 9: An FT-IR spectrophotometer was utilized for the sample analysis. About 4 mg to 5 mg of the test sample was mixed with dry potassium bromide, and the sample was analyzed at the transmission mode in 4000-400 cm-1 wave number range 5.

Calibration of Standard Curve of Allopurinol Solid Dispersion: Allopurinol solid dispersion equivalent to 100 mg of allopurinol was accurately weighed and dissolved in 100 ml of pH 6.8 phosphate buffer solution in a 100 ml volumetric flask. From the prepared stock solution, suitable dilutions were done to get concentrations of 4 µg/ml, 8 µg/ml, 12 µg/ml, 16 µg/ml, and 20 µg/ml, respectively. The absorbance of each solution was determined by a UV-visible spectrophotometer at the λmax of 250 nm using pH 6.8 phosphate buffer solution as blank.

Formulation of Allopurinol Solid Dispersions: Allopurinol solid dispersion was prepared by solvent evaporation technique using hydroxy propyl cellulose as a continuous phase in the weight ratio of 1:0.5. Initially, the physical mixture of allopurinol and hydroxy propyl cellulose was dissolved in a round bottom flask consisting of 10 ml of ethanol. The solvent was allowed to evaporate in a vacuum oven at a temperature not exceeding 45 oC. The resultant solid dispersion of allopurinol was pulverized in a mortar with the help of a pestle, set aside in a vial, and further stored in desiccators until its further use.

Preparation of Fast-Dissolving Tablets of Allopurinol Solid Dispersions by Sublimation Method 6: The fast-dissolving tablets of allopurinol solid dispersions were prepared using camphor/ammonium bicarbonate as the subliming agents. Sodium starch glycolate and crospovidone were utilized as superdisintegrants. Each of the superdisintegranting agents was employed in 3 different compositions. Microcrystalline cellulose was used as diluents, magnesium stearate as a lubricant, and talc as a flow promoter. Aspartame was used as a sweetening agent and mannitol for pleasant mouth feel. All the ingredients were passed through # 60 sieve followed by mixing in geometric fashion. The resultant uniformly mixed blend was then subjected to compression into tablets using a Secor tablet compression machine (punches flat-faced, 12 mm diameter) in order to prepare 650 mg tablets. Finally, the prepared tablets were subjected to the process of sublimation by keeping in hot air oven at 40 ºC for 6 h. A total of ten formulations was developed and composition of the formulations was mentioned in Table 1.

Angle of Repose: The angle of repose was determined by the fixed funnel method in which a funnel was mounted upright to the stand at a 6 cm height. 5 g of the sample powder was poured into the funnel by closing the open end with the thumb, and then took off thumb.

The maximum height of the powder heap (h) formed was noted. The radius of heap (r) was determined, and finally, the value of angle of repose (θ) was calculated using the formula 7.

In which θ = angle of repose

Bulk Density: To determine bulk density of powder, the quantity of powder (passed through standard # 40 sieve) was poured into a measuring cylinder and the initial (height) volume of the powder, also known as bulk volume, was noted. Powder bulk density was further calculated using the below-mentioned formula 8.

Carr’s Index or % Compressibility 10, 11: The value of Carr’s index signifies the flow characteristics of powder and is calculated as,

Hausner’s Ratio: Hausner’s ratio is an indirect indicator of ease of powder flow and is computed using formula 12.

The thickness of the prepared tablets was determined for 10 pre-weighed tablets from each formulation utilizing a Vernier calliper, expressed as average thickness in mm. Tablet thickness must be within ± 5% variation of a standard. The diameter of the developed FDTs was determined.

Tablet Hardness: Tablet hardness or crushing strength is the force applied across the diameter of the tablet to break it. The resistance of tablets towards abrasion, breakage or chipping, under transportation conditions, handling, and storage before use depend on its hardness. Tablet hardness was determined for each formulation by Strong Cobb hardness tester 14.

Friability: The Friability test was performed employing Roche friabilator to assess the effect of shocks and friction, which may cause tablet chipping, capping, or breakage problems. A prior weighed sample of tablets was taken in the plastic chamber of the friabilator that revolves at a speed of 25 rpm for 4 min, and the tablets were dropped at a distance of 6 inches with each revolution. Tablets after the friability test were de-dusted and re-weighed. The core tablets must not lose > 1% of their weight.

Wetting time & Water Absorption Ratio 15, 16: A piece of tissue paper folded twice was arranged in a small petri plate (6.5 cm internal diameter) consisting of 6 ml of pH 6.8 phosphate buffer solution. A pre-weighed tablet was placed on the paper, and the time taken for complete wetting was noted utilizing a stopwatch. The wetted tablet was further re-weighed. The following formula calculated the water absorption ratio (R),

Drug Content: The prepared fast-dissolving allopurinol solid dispersion tablets were analyzed for their drug content. 03 tablets from each formulation were weighed and powdered finely. About 450 mg of allopurinol solid dispersion, equivalent to 300 mg of allopurinol was weighed accurately and dissolved completely in pH 6.8 phosphate buffer solution, followed by filtration. One ml of filtrate was diluted to 100 ml with a pH 6.8 phosphate buffer solution. A UV-visible spectrophotometer measured the absorbance of the resulting solution at a λmax of 250 nm.

In-vitro Dispersion Time: For the determination of in-vitro dispersion time, 3 tablets from each formulation were dropped separately in measuring cylinders of 10 ml capacity containing 6 ml of pH 6.8 phosphate buffer solution. Time taken for the complete dispersion of each tablet was noted.

In-vitro Dissolution Studies: In-vitro dissolution study for the developed fast dissolving tablets of allopurinol solid dispersion was performed using type II (paddle type) USP dissolution testing apparatus”         at a stirring speed of 50 rpm and a temperature of 37 °C ± 0.5 ° in pH 6.8 phosphate buffer solution. At each specified time interval, 5 ml of sample was withdrawn with replacement by fresh dissolution medium. Samples were analyzed by UV- visible spectrophotometer at 250 nm against the blank. The percentage drug release was calculated using an equation obtained from the calibration curve. The in-vitro drug release studies were conducted in triplicate, and the graph was plotted considering the mean values of drug release with respect to time.

Drug Excipients Compatibility Studies: The interaction studies were done to determine any drug interaction with the excipients used to prepare fast-dissolving tablets. 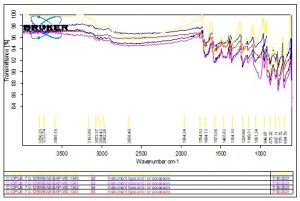 Based on the FT-IR spectra, it was evident that there was no physical incompatibility of pure drug with the casuperdisintegrants, subliming agents, and other excipients used in the formulation of allopurinol solid dispersion fast-dissolving tablets. 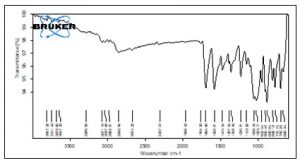 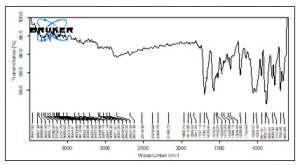 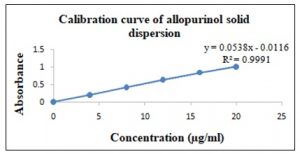 The tablets were subjected to post-compression analysis, including physical appearance, tablet dimensions – thickness and diameter, weight variation, Friability, hardness, and drug content. The developed FDTs of all the ten formulations were observed to be in a slight off-white colour, round, flat in shape, and smooth in texture. The values of thickness and diameter for the ten formulations were observed to be 0.5 mm ± 0.2 and 1.2 mm ± 0.1, respectively. The results of weight variation test for all the formulations of FDTs were found to be within the acceptable limits. Hardness values for the prepared formulations were in 2.6 ± 0.05 kg/cm2 to 3.3 ± 0.20 kg/cm2 range. The % friability was observed in the range of 0.50% ± 0.02 to 0.75% ± 0.06 and the values of drug content in the range of 95.75% ± 0.01 to 99.38% ± 0.01. The results indicated that the developed FDT formulations passed the tests for % friability and drug content. Wetting time for all the developed formulations of FDTs was observed to be in 34 sec to 71-sec range, as shown in Fig. 5. Water absorption ratios of all ten formulations were found in the range of 145 ± 1.52 to 208 ± 1.27. Wetting time, in-vitro dispersion time, and water absorption ratio were found to be faster for the formulation F9 containing subliming agent camphor & superdisintegrant crosspovidone than other formulations. The drug content in the formulations was found to be in the range of 88.98% ± 1.28 to 98.25% ± 1.56. According to the pharmacopoeial standards, the dispersible tablet must disintegrate within 3 min. All formulated batches have shown less disintegration time i.e., 40 sec ± 1.33 to 114 sec ± 1.28, indicating the suitability of formulation for fast dissolving tablets Fig. 6. 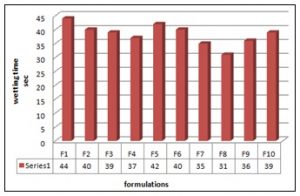 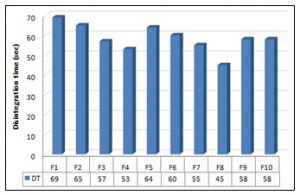 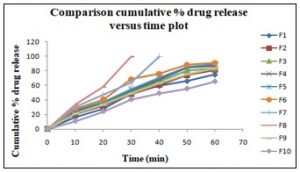 CONCLUSION: Solid dispersions of allopurinol were successfully prepared using hydroxy propyl cellulose by a solvent evaporation method. Fast-dissolving tablets of allopurinol solid dispersion were developed utilizing various super disintegrants-sodium starch glycolate, crosspovidone and subliming agents (camphor and ammonium bicarbonate) by sublimation technique. The physical properties of developed formulations were found to be well within the limits of the official standards. All prepared tablet formulations were found to be disintegrated within 114 sec, when examined for the in-vitro disintegration time. Among all the formulations, formulation F8 containing crosspovidone in higher amounts and ammonium bicarbonate has shown the fastest disintegration time of 40 sec and a higher percentage of drug release, 99.51% within 30 min. Overall, the results obtained demonstrated that fast-dissolving tablets of allopurinol solid dispersion can be prepared successfully using ammonium bicarbonate as a subliming agent (F8). The developed fast-dissolving tablets disintegrated within a few seconds without water requirement. Thus, the present study demonstrated the potential for rapid disintegration, followed by drug dissolution, which may lead to improved bioavailability, effective therapy and enhanced patient compliance.

ACKNOWLEDGEMENT: The authors are thankful to the principal, Chalapathi Institute of Pharmaceutical Sciences, and the management, Chalapathi Educational Society, Guntur, for providing the necessary facilities and requirements for carrying out the research work successfully.