Terpene components of ginger include zingiberene, ß- sesquiphellandrene, and α-curcumene, while phenolic compounds include gingerol, paradols, and shogaol. These gingerols (23-25%) and shogoals (18-25%) are found in higher quantities than others 1. So, it was necessary to reduce the dose and formulate a convenient dosage form to increase patient compliance. The requirement is that the herbal formulation must deliver the active phytoconstituent at a therapeutic level. Nano-technology may be applied to overcome this limitation, ensuring enhanced bioavailability, improved patient compliance, optimized drug delivery, and better stability 2. The skin is the best biological barrier with a surface area of 1.5–2.0 m². However, the majority of drugs cannot penetrate through the intact skin due to the structural, biochemical, and physiological properties of the organ.

Transferosomes are lipid bundles in the form of aggregates that are ultra-deformable. They are made up of one interior aqueous segment encircled by a lipid bilayer. They are more elastic and stable in the presence of surfactants i.e., edge activator in the vesicular membrane 3. Dermis and Epidermis are the most important layers of skin. The epidermis is the outermost layer of skin which is 100 to 150 µm thick with no blood flow. It has one more layer within it known as the stratum corneum. This layer is most important for transdermal delivery of drugs. The drug which can penetrate the stratum corneum reaches the bloodstream by passive diffusion. This is the only process to transfer both water-soluble and lipid-soluble drugs.

The best mixture for transdermal delivery is about fifty percent of the drug, each being hydrophilic and lipophilic. This is because the intercellular lipid bilayers of the cell membranes are easily accessible to lipid-soluble substances whereas water-soluble drugs are able to pass limiting steps in transdermal drug delivery system 4. Since ginger contains 6-gingerol and 6- shogaol as major constituents which are lipophilic in nature. So, can be easily formulated into a transdermal drug delivery system.

Materials: Lipoid P-100 was obtained as a free gift sample from Lipoid, Germany. Tween 80 and Span 80 were procured from Loba Chem Pvt. Ltd, Mumbai. All other reagents used were of analytical grade.

Extraction of Rhizome: Fresh rhizomes of Ginger were collected from the local market of Vasai, Mumbai, (Maharashtra) during February 2018. The authentication of the fresh ginger plant along with the rhizome was carried out at Saint Xavier’s College, Mumbai. The sample matched with the standard herbarium specimen sample number AKC-1, and its identity was conﬁrmed to be Zingiber ofﬁcinale Rosae. Family- Zingiberaceae. The fresh rhizomes were washed with water and wiped with a clean cloth to remove dirt, dust, and debris. The rhizomes were dried in the sun for 7 days. The dried rhizomes were then grinded to ﬁne powder. 20 g of ginger powder was extracted with 200 ml of methanol by maceration for 2 h and then by ultrasonication (Spectra lab) at room temperature for 2 h. The mixture was ﬁltered. The ﬁltrate obtained was concentrated and evaporated to dryness on an electric water bath, maintaining the temperature at 100 °C.

Determination of Absorption Maxima: 200 µg/ml solution of methanolic ginger extract was dissolved in methanol and phosphate buffer 7.4 separately. The solutions were scanned at the range of 200-800 nm using Thermoscientiﬁc evolution 300 UV-Vis spectrophotometer.

Preparation of Transferosomes Containing Methanolic Ginger Extract: Transferosomes of ginger extract was prepared by using solvent injection technique. The drug extract, cholesterol, and the lipid (Soy lecithin) were dissolved in different ratios using various solvents like ethanol, chloroform, methanol, acetone for different batches by trial and error method. This solution was sonicated till it formed a clear solution and added by injection technique at one jet to the aqueous phase. Tween-80, Span 80 were tried as edge activators, and stirring was continued at 1200 rpm for 2 h. The composition of formulations is in Table 2. The solution was then homogenized for 5 min. Formed nanoparticles were harvested from the aqueous slurry by lyophilization using 10% w/v D- (+)-Trehalose dihydrate as a cryoprotectant 3.

Particle Size and Zeta Potential Measurement: The average diameter and size distribution and zeta analysis of vesicles were determined by Malvern Zetasizer Version 7.12. Serial no. MAL500458. Zeta potential was analyzed to measure the permeation of transferosomes by studying its colloidal property and stability of the vesicle 5.

Entrapment Efficiency: Transferosome entrapped 6-gingerol was estimated by centrifugation method. The prepared transferosome were placed in an Eppendorf tube and centrifuged at 14000 rpm for 30 minutes. 1ml supernatant was withdrawn and diluted with phosphate buffer (pH 7.4). The unentrapped 6-gingerol was determined by UV spectrophotometer at 282 nm. The free 6-gingerol in the supernatant gave the total amount of unentrapped drug. Entrapment efficiency was calculated by an indirect method as follows 5:

In-vitro Release Studies: Ginger extract transfer-osomes were evaluated for in-vitro drug release using dialysis (Dialysis membrane-50 with a molecular weight cut off 12000 to 14000 Da from Hi-Media Laboratories Pvt. Ltd.) technique. All the batches were evaluated using Phosphate buffer (pH 7.4) as the medium to simulate the pH conditions of skin.

Procedure: 200 ml Phosphate buffer 7.4 was taken in a 250 ml beaker. 5 ml of the transferosomes formulation was filled in a dialysis membrane bag, and other end of bag was tied with thread.

The solution was stirred by a magnetic needle at 100 rpm using a magnetic stirrer (Remi). The temperature of the solution was maintained at 37 °C to simulate the body conditions. 2 ml of aliquots were taken at different time intervals 0, 0.25, 0.5, 1, 2, 4, 6, 8, 12, 22, 24 h and the same amount of fresh medium was replaced immediately. All the aliquots were analyzed at 282 nm using a UV spectrophotometer. The cumulative drug release was then calculated 6.

Stability Studies: The stability studies of the formulation were carried out as per the ICH guidelines. The optimized batch of transferosomes was stored at different temperature conditions i.e., 4° ± 2 °C, 25° ± 2 °C. The optimized batch was then evaluated for physical stability for the period of 3 months. The batch was also evaluated for the amount of drug remains entrapped in the vesicle and the particle size of the transferosomes 7.

Formulation of Transdermal Patch Containing Ginger Transferosomes: Hot water-soluble PVA was used for preparing backing membrane. 2.5% PVA was dissolved in required amount of distilled water by intermittently heating at 60 °C for few seconds. The solution was poured in a petri dish and allowed to dry in hot air oven at temperature not exceeding 60 °C till it formed a membrane. Matrix type transdermal patches compose of different ratios of polymers, surfactant, plasticizer and solvent were prepared by solvent casting technique. Drug matrix was prepared by dissolving requisite amount of drug (ginger extract or ginger transferosomes), HPMC K-15 M and Tween 80 in hydroalcoholic solution (1:1). PEG 400 was added to this solution and stirred. The uniform dispersion obtained was casted on PVA backing membrane and dried at room temperature for 24 h.

This solution was added slowly in polymer base with continuous stirring. The volume was made to 22 ml with Chloroform. 5 ml of the final solution was poured in an evaporating dish covered and allowed to set for 24 h.

This solution was added slowly in polymer base with continuous stirring. The volume was made to 22 ml with Methanol. 5 ml of the final solution was poured in an evaporating dish covered and allowed to set for 24 h.

Procedure: In a beaker, the polymer base containing HPMC (K-100 M), PEG 6000, and ethanol were dissolved. In another beaker ethanol and PEG 400 were dissolved.

This solution was added slowly in polymer base with continuous stirring. The volume was made to 22 ml with ethanol. 5 ml of the final solution was poured in an evaporating dish covered and allowed to set for 24 h.

Once the gel base was optimized, ginger extract and ginger transferases respectively were loaded in it, and the solution was poured in petri dish and allowed to settle for 24 h till it gave a clear patch.

Folding Endurance: A patch of area 4 × 4 cm² was cut and was repeatedly folded until it broke. This gave the value of folding endurance. It indicated the resistance of the patch to poor handling.

Film Thickness: The film was measured at different places with the help of a screw gauge, and the average of 5 readings gave the film thickness.

Drug Content: A patch of area 4×4 cm² was cut and put into 100 ml phosphate buffer (pH 7.4). The solution was shaken continuously for 24 h. It was then ultrasonicated for 15 min and filtered. The drug content was analyzed by ultraviolet spectrophotometer at λmax of 282 nm.

Uniformity of Weight: Uniformity of weight was determined by weighing individually 10 patches, and then the average was taken.

In-vitro Diffusion Studies: Modiﬁed Franz diffusion cell with a receiver compartment volume of 33 ml and effective diffusion area of 2.2 cm². The in-vitro drug diffusion was performed by using artiﬁcial dialysis membrane 50 in Phosphate buffer 7.4. The dialysis membrane was soaked 2 h. Before conducting the diffusion studies. In the receiver compartment of the modified Franz diffusion cell, 33 ml of Phosphate buffer 7.4 was filled. The outer jacket was filled with water.

The dialysis membrane was placed between the transdermal patch and the receiver compartment. The medium was maintained at 37 °C. The medium was stirred by magnetic needle using a magnetic stirrer (Remi) to simulate the body conditions. 2 ml of aliquots were withdrawn at time intervals of 0, 0.25, 0.5, 1, 2, 4, 6, 8, 12, 22, 24 h through the outlet. The medium was immediately replaced by a fresh medium. The aliquots were then analyzed by UV spectrophotometer at 282 nm. The cumulative drug release through the effective diffusion area was then calculated. 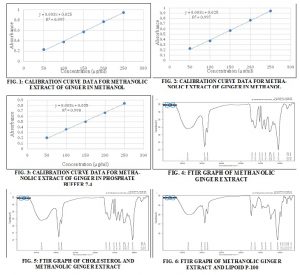 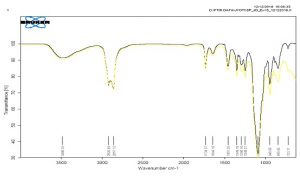 Characterization of Transferosomes: Particle size and zeta potential measurement. The average particle size of ginger extract transferosomes with Lipoid P-100, cholesterol, and Tween 80 ratio of 1:2:0.15:0.025 formulation (A7) was found to be 318.8 nm, and the polydispersity index value was 0.123, and Zeta potential value was found to be -6.3 mv indicating good stability of the formulation. The results were graphically represented in Fig. 8 and 9. 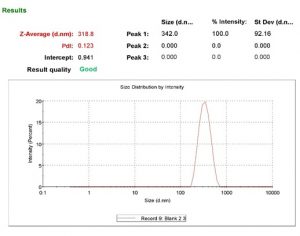 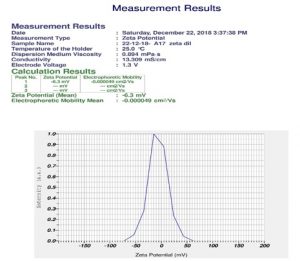 Entrapment Efficiency: The entrapment efficiency of all the batches was determined by the cold centrifugation method.

Stability Studies of A7 Batch of Formulation of Ginger Transferosomes: A7 batch showed good storage stability at 4 ± 2 °C where there were no significant changes in the entrapment efficiency.

TABLE 4: STABILITY STUDIES OF A7 BATCH OF FORMULATION OF GINGER TRANSFEROSOME

Preparation of Optimized Batch of Transdermal Patch Containing Ginger Transferosomes: 700 mg of HPMC K-15 M was soaked in a hydroalcoholic solution (1:1) till it forms a smooth gel. In a beaker, 1 ml of PEG solution, 0.5 ml Tween 80 and 20 mg of lyophilized ginger transfer-osomes were dissolved using ultrasonication.

This solution was poured slowly in the polymer base. The gel was then kept for ultrasonication till all the air bubbles were removed. This final solution was poured in a petri dish, covered with aluminum foil, and allowed to dry for 24 h at room temperature.

TABLE 5: LIST OF INGREDIENTS AND THEIR ROLE IN PREPARING TRANSDERMAL PATCH

Folding Endurance: The folding endurance of P6 batch was found to be 7 which ensured that the prepared transdermal patch had the capability to withstand mechanical pressure and has a good flexibility.

TABLE 6: DRUG CONTENT AND OTHER PHYSICAL PARAMETERS OF DIFFERENT FORMULATION OF TRANSDERMAL PATCH

*All the values are given in mean± standard deviation (n=3) *

CONCLUSION: Transferosomes of ginger were formulated by solvent injection technique. The most stable formulation of transferosomes was 1:2:0.15:0.025. These were formulated into trans-dermal patch. The formulation showed sustained release when compared to simple ginger extract. Hence, it may be concluded that the transdermal patches with ginger transferosomes are a better approach as compared to simple ginger extract. The frequency of dose is reduced, and the bioavailability of ginger constituents is increased.

ACKNOWLEDGEMENT: None. No funding to declare. We are grateful to the Tata Institute.