ABSTRACT: The main objective of the study is to develop gelucire 44/14 based lapatinib ditosylate (LPT) SNEDDS for the improvement of solubility and drug release. Pseudo tertiary phase diagram constructed for varying oil, surfactant, and co-surfactant combinations. Fifteen LPT SNEDDS formulations were prepared with anticipated component ratios (gelucire 44/14, peceol, and capmul MCM) based on monophasic region are subjected to thermodynamic physical stability test. Formulations that cleared stability tests were evaluated for % transmission, drug content, and in-vitro drug release analysis. The optimized formulation analyzed for particle size and zeta potential, followed by FTIR and SEM analysis. Formulation F13 with a maximum drug release of 98.96% in 60 min higher than 38.90±3.25% of pure drug is considered an optimized formulation. The average particle size and zeta potential of the F13 were 72.5 nm and -13.4 mV, respectively. The FTIR and SEM studies do not indicate any drug excipient interaction and confirm uniform drug distribution. The formulation subjected to accelerated stability study is proved to be stable over a period of six months. The results suggested that LPT SNEDDS formulations are an encouraging alternative for improved solubility and drug release of LPT.

INTRODUCTION: Breast cancer is the most spotted cancer amongst women in India. Metastatic breast cancer (MBC) is the most radical stage of breast cancer that occurs when the disease starts spreading to other parts of the body 1. In the recent past, various new agents contributed to the improvements in the treatment outcome, including taxanes, anthracyclines, antimetabolites, aromatase inhibitors, and antibodies. MBC ranks as the number one cancer among Indian females with a rate as high as 25.8 per 100,000 women and mortality of 12.7 per 100,000 women, according to health ministry 2, 3, 4.

Cancer is an atypical molecular circuitry linking signaling pathways that regulate cellular growth. ERBB receptors, also known as epidermal growth factor receptors (EGFR) play a vital role in breast and another cancer signaling. These receptors are vital in organ development and regulating cellular differentiation and morphogenesis in tissues. LPT is a tyrosine kinase inhibitor that inhibits the receptors ErbB1 and ErbB2 receptor growth. The validation for LPT as an anticancer drug is that the cordon of the tyrosine kinase activity of ErbB1 or ErbB2 is estimated to hinder the transforming activity that grades from overexpression of these receptors 5, 6, 7.

LPT, an active oral anti-cancer agent belongs to class II of BCS classification with deprived water solubility and encompassing the first-pass metabolism, is considered for SNEDDS formulation to improve its solubility and drug release where a drug is incorporated into lipid carrier and produce as self-nanoemulsion, which was stabilized by surfactants and co-surfactants.

Lipid-based self-nano emulsifying drug delivery systems (SNEDDS) have gained back the prominence of nanoemulsions by modest alterations for attaining enhanced drug delivery. Thus the current study was aimed to develop gelucire 44/14 based LPT SNEDDS for the improvement of solubility and dissolution rate.

The supernatant removed, and the drug concentration was determined by UV at 309 nm. An oil, surfactant, and co-surfactant containing more drug content are selected for formulating SNEDDS for LPT 8.

% Transmittance: From the preliminary solubility studies, the selected vehicles were mixed at varying ratios. Firstly Smix (surfactant: co-surfactant) of different ratios (1:1, 2:1, and 3:1) are prepared, and later, oil: Smix ratios ranging from 1:9 to 9:1 are prepared in 2 ml Eppendorf tubes and thoroughly shaken and kept aside. A fixed volume of water (100 ml) was added to the calculated amount of vehicles (0.1 ml) and checked for phase separation and turbidity visually. Solutions with no phase separation and clear appearance were separated and used for checking transmittance using a UV spectrophotometer at 309 nm. Maximum transmittance values indicate the formation of small nanosize particles. Ratios showing a percentage transmittance value more than 80 were considered for plotting pseudo ternary phase diagram for representing self-emulsification region 9.

Construction of Pseudo Ternary Phase Diagrams: Transmittance values of more than 80 indicate formation of nanoemulsion; hence these ratios were noted and selected for plotting pseudo ternary phase diagram. Phase diagrams are plotted using CHEMIX software in which two ratios were fed and calculated; it shows am emulsification region which is shaded and from which 15 ratios for formulating LPT SNEDDS were chosen 10.

Thermodynamic Stability Test: The stable samples were centrifuged for 5 min at 3000 rpm and examined for any phase separation. The stability of the formulation is checked by centrifugation study and freeze-thawing test 11.

Drug Content: The extent of drug present in 0.2 ml of formulation is estimated by UV spectrometer. The solution filtered, diluted with 0.1N HCl, and analyzed at λmax 309 nm against blank 11.

% Transmittance of SNEDDS: Nanoemulsions are optical isotropic solutions of oil, surfactant, and co-surfactants and thermodynamically stable. Hence investigation of optical clarity is conducted for the determination of isotopic parameter. The LPT SNEDDS reconstituted with distilled water. The resulting emulsion was visually examined for the presence of any turbidity. The percentage transmittance of the samples measured using UV spectrophotometer at 309 nm 12, 13.

In-vitro Dissolution Studies of LPT SNEDDS Formulations: The SNEDDS whose weight equivalent to 250 mg of LPT was filled into hard gelatin capsules with 0.1N HCl with 2% polysorbate 80 as dissolution media, stirred at 37°C at 50 rpm rate. At pre-set time intervals, 5 ml of sample withdrawn, filtered through 0.45 μm membrane filter, and analyzed spectophoto-metrically at 309 nm 14, 15.

Determination of Particle Droplet Size: The droplet size imitates the uniformity of particles, which in turn depicts the size distribution of nanoemulsion. The droplet size of LPT SNEDDS formulations is evaluated by Photon correlation spectroscopy (Malvern Instrument UK) that measures the size range of 10 to 5000 nm 16. All measurements were done in triplicate from three independent samples.

Determination of Zeta Potential: The stability of nanoemulsion is directly correlated to surface charge magnitude. The zeta potential of the dilute LPT SNEDDS formulation homogenized was evaluated with a zeta meter system measured with Zetasizer. (Malvern, Nano Series ZS90, Malvern Instruments, Ltd., UK). All studies were conducted in triplicate at 25°C 17.

Solubility Studies: From the solubility studies, it was evident that medium-chain triglycerides were highly influencing the solubility of the drug; these are obtained from a vegetable source and are resistant to oxidation. Gelucire 44/14, being a medium-chain triglyceride with high solvent capacity, was showing a high degree of solubility of about 232.11mg/ml for LPT when compared to other oils. Surfactants and co-surfactants with high HLB values were useful in solubilizing LPT; these are most commonly used as they are more stable and non-toxic in the formulation. From the solubility study, peceol-81.22 mg/ml (surfactant) and capmul MCM-80.99 (co-surfactant) were showing high solubilizing efficiency for LPT Fig. 1-3.

Pseudo Ternary Phase Diagram: Pseudo-ternary phase diagram constructed to ascertain the micro emulsion regions for optimizing the concentrations of oil, surfactant, co-surfactant, and their mixing ratios. This diagram comprises oil, water, and Smix, at each corner in the phase triangle. The oil (gelucire 44/14), surfactants (peceol) with co-surfactant (peceol) at different ratios (1:1, 2:1, 3:1) were dispersed at varying weight ratios oil and Smix ranging from 1:9 to 9:1 in different vials followed by vertexing and water titration (Fig. 4).The translucent and low viscosity nanoemulsion area is presented as a shaded area in the phase diagrams. This shaded area in phase diagram represents self-emulsification region and thus ratios were extracted from this region for formulating LPT SNEDDS. 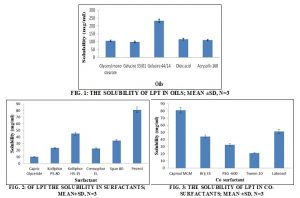 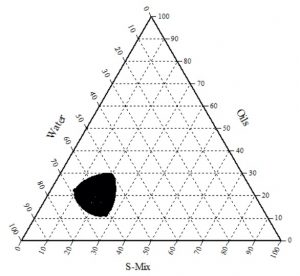 Thermodynamic Stability Studies of LPT SNEDDS: Prolonged storage of SNEDDS might result in precipitation of drug; hence the stability of a formulation is checked by centrifugation and freeze-thawing test. The stability studies conducted indicated no significant phase separation after centrifugation and no effect of temperature variation on the physical appearance of the LPT SNEDDS formulations after freeze-thawing Table 2.

The % Transmittance Measurement and Drug Content of LPT SNEDDS: The % transmittance of the 15 formulations post-dilution at diverse time intervals studied. The values ranged from 72.17% to 99.18%. The results indicated that an increase in surfactant to cosurfactant ratio increased % transmittance, thus increasing the optical clarity of the formulation. The highest transmission observed for F13 with Smix ratio of 3:1 is also indicative of nanometer range particles.

In-vitro Dissolution of LPT SNEDDS: The dissolution rate from all the formulations varied between 90.33±5.02 - 98.96±5.28% for 60 min, which was a higher almost three fold increase when compared to pure drug release (38.90±3.25% in 60 min) indicates formation of small nanosize particles with increased surface area forming nano-emulsion. The formulation, when it comes in contact with the dissolution media, immediately form nanoemulsion whose interfacial tension is reduced by surfactants and co-surfactants; hence the ratio with more surfactant and co-surfactant showed a high degree of drug release, and also in general as the particle size is small with more surface area, more is the absorption and hence more is the drug release, and out of all formulation F13 was showing maximum drug release of 98.96±5.28% at the end of 60min with more Smix ratio Fig. 5, 6 and 7. 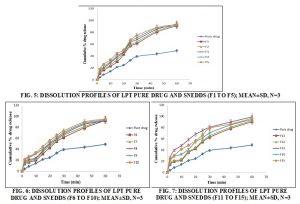 Drug Excipient Interactions by FTIR Spectroscopy: The IR spectra peaks of the LPT pure drug and the optimized SNEDDS formulation F13 spectra were observed at the same wavenumbers as shown in Fig. 8 and 9. The peaks at 1120–1250 cm-1 represent C-SO2 stretching frequency, 3050–3150 cm-1 represent N-H group, and 1350–1470 cm-1 belongs C=N. The strong band at 682 cm-1 corresponds to C-Cl stretching, while the band at 1166 cm-1 corresponds to C-F stretching frequency. The presence of these predominant peaks in all the spectra indicates no significant interaction takes place between drug and formulation excipients. 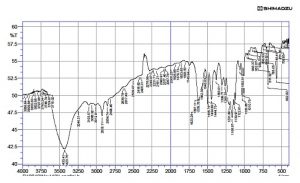 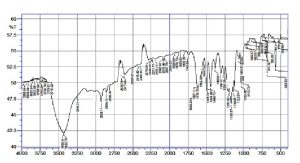 Particle Size Analysis of LPT SNEDDS: Smaller particle size facilitates larger interfacial surface area for drug absorption and hence improving bioavailability and also governs the drug release effectively. The average particle size of LPT SNEDDS formulation (F13) is 72.5 nm that is within the nanometric range of < 100 nm that attributed to the stability of the oil droplets and localization of the surfactant molecules at the oil-water interface. This small nanorange particle size of F13 SNEDDS formulation provided more surface area for dissolution and thus enhanced the solubility and facilitated high drug release Fig. 10. 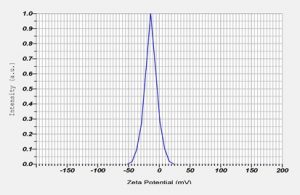 Scanning Electron Microscopy (SEM) for LPT SNEDDS: Scanning electron microscopy evaluated the morphology of SNEDDS formulation. The data showed a spherical shape for the optimized SNEDDS (F13) formulation with uniform and relatively narrow particle distribution. The images clearly indicate the spherical nature of nanoemulsions, with no signs of coalescence. The nanoemulsion droplets appeared as bright spheres with a smoother surface. The droplets appeared distinct, with no signs of drug precipitation conjecturing the stability of the formulation Fig. 12.

Stability Studies: The stability of optimized LPT SNEDDS formulation studied for six months at 40 ±2 °C / 75±5 % RH according to ICH guidelines. The formulation was packed in hard gelatin capsules for stability studies. The studies indicated no significant variation in drug release and the drug content, physical and emulsifying properties Table 4.

CONCLUSION: LPT SNEDDS was formulated with gelucire 44/14, peceol, and capmul MCM. The developed formulations were subjected to different evaluation parameters. Formulation F13 was found to be the best final optimized one based on the evaluation parameters. The in-vitro dissolution of the F13 formulation was highest among all other formulations of 98.96%, with reduced particle size and enhanced solubilizing capacity than other formulations and pure drugs. The results showed that the globule size of the F13 formulation was in the nanometer range (72.5 nm) with zeta potential -13.7 mV, which indicated reduced particle size and proved good stability. The SEM studied of F13 indicated the narrow uniform distribution of a drug in the formulation and found it to be stable for 6 months. Hence these investigations advocated the suitability of SNEDDS loaded LPT in the enhancement of solubility and drug release.