DEVELOPMENT AND EVALUATION OF MELT- IN- MOUTH TABLETS BY SUBLIMATION TECHNIQUE

DEVELOPMENT AND EVALUATION OF MELT- IN- MOUTH TABLETS BY SUBLIMATION TECHNIQUE

In the present study Rizatriptan benzoate, which is the bitter drug requires taste, masking. β- Cyclodextrin is used in taste masking, which improves the patient compliance and also increases the rate of dissolution. Solid dispersion of drug and β- Cyclodextrin were prepared which was optimised in 1: 8 ratios, which gave satisfactory results for taste masking. This was then characterised using Differential scanning colorimetry (DSC), X-ray diffraction (XRD) and Infra Red (IR). The prepared solid dispersion was then formulated into tablets using varying concentrations (0-30%) of sublimating agents. The sublimating agents used were camphor and ammonium bicarbonate. The formulated powder blend was evaluated for angle of repose, bulk density, tapped density, Carr’s index. These powder properties showed good flowability. Tablets were formulated by direct compression. The sublimation process produced pores into the tablets, which allowed easy penetration of dissolution media followed by rapid release of the drug, which is the major aim of melt-in-mouth tablet dosage form. The tablets were evaluated for hardness, friability, disintegration time (in vitro, in vivo), drug content and dissolution. The tableting properties showed that hardness and friability were within the range. Drug content was found to be 97.79 %. The in vitro and in vivo disintegration time was within the range 18- 45 and 21-49 seconds respectively. Dissolution showed 100 % release rate within 0.5-2 minute.

INTRODUCTION: We often see that patient find difficulty in swallowing the conventional tablets especially the geriatrics, paediatric patients, and patients suffering from various diseases, are the major problems. Hence, it is the necessary criterion to develop a dosage form that will provide rapid and quick action. Thus, the development of Melt-In-Mouth tablets, which disintegrates rapidly without the need of drinking water providing convenience of administration, patient compliance and quick onset of action 1, 2. These tablets are prepared by sublimation method using camphor and ammonium bicarbonate as sublimating agents along with mannitol provided porous tablets that on administration disintegrates in the oral cavity, without the need of swallowing or intake of water and also rapid drug release rate.

The fast dissolving tablets prepared contains insoluble excipients and gave a rough texture 3, which is overcome by Melt-In-Mouth tablets, which were porous and gave a pleasant mouth feel improving the patient compliance.

Rizatriptan Benzoate is an antimigraine agent used in treatment of migraine associated with severe one-sided throbbing headache, which is followed by intense pain. Hence to provide quick action there was a need to develop melt in mouth tablets. It is a 5-Hydroxy Tryptamine (1B/1D) [5HT (1B/1D)] receptor agonist used in Melt-In-Mouth tablet providing quick action 4.

Characterization of rizatriptan benzoate and b- cyclodextrin:

Formulation design of melt-in-mouth tablets by sublimation method 8, 9, 10: For development of rizatriptan benzoate melt-in-mouth tablets by sublimation technique 8 formulations were prepared with varying concentrations of ammonium bicarbonate and camphor (0 to 30% w/w) which were added to the tableting component. Ingredients after sifting through sieve no. 40 were thoroughly mixed for 10 min. Tablets were compressed on 8mm round concave punch on 16-station rotary tablet machine (Cadmach). The compressed tablets were then subjected to sublimation at 60°C for 6 hrs in vacuum oven. Tablets were evaluated for various quality control parameters. Batch sizes for all the formulation were 50 tablets.

RESULT AND DISCUSSION: Rizatriptan benzoate: β- cyclodextrin (1: 1 to 1: 12) solid dispersions were prepared by slurry method to mask the bitter taste of the drug. Panel of 10 members using time intensity method were evaluated for the taste masking of drug.  The ratio of drug: β- cyclodextrin for taste masking was optimised to 1: 8.  The data in Table 1 indicates the taste evaluation of drug: β-cyclodextrin (1: 8) solid dispersion.

TABLE 1: VOLUNTEERS OPINION TEST FOR RIZATRIPTAN BENZOATE BEFORE AND AFTER TASTE MASKING (n= 10)

The IR spectra of the solid dispersion (fig. 1) showed that there was no significant evidence for interaction between drug and β- cyclodextrin.  Peaks of both drug as well as β- cyclodextrin were observed and interpreted. 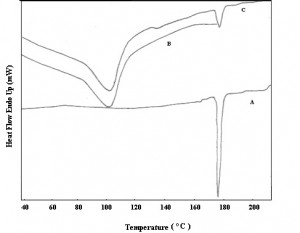 The X-ray diffraction pattern of drug: β- cyclodextrin (1: 8) showed no defined peak; this implies the absence of apparent crystallinity in the solid dispersion. However the pure drug powder showed typical peak of rizatriptan benzoate, conforming the satisfactory sensitivity of the method (fig. 3). 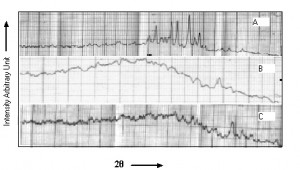 The SEM studies showed that the tablet produced is porous in nature, which can be easily identified as seen in figures 4, 5, 6 and 7 which shows the difference between tablets before and after sublimation. 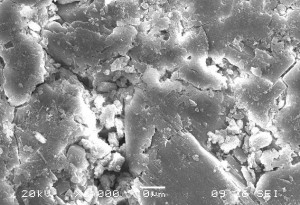 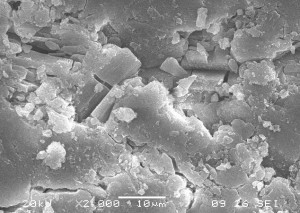 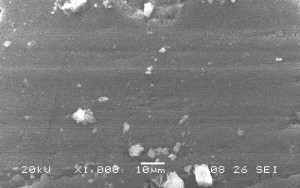 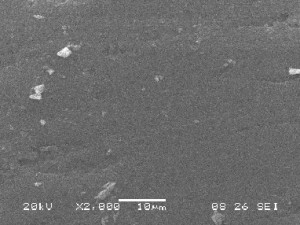 In the present study various sublimating agents were used and were evaluated using various parameters. After confirming the absence of interaction in the solid dispersion; drug: β-Cyclodextrin (1:8), complex was used in designing of the formulations.  The melt-in-mouth tablets of rizatriptan benzoate were prepared by using various sublimating agents.

From table 3, it was observed that all the formulations have angle of repose between ranges 13- 23°. This was higher than control formulation. Also, the percentage compressibility was found within the range of 9-16. The powder blend of all the formulations has good flowability. Evaluation parameters for powder blend like angle of repose, bulk density, tapped density, percentage compressibility were within limit. Drug and solid dispersion showed good flow properties.

Evaluation of tablets by prepared by sublimation method: As shown in table 4, there was no decrease in mean weight of tablet formulations E1 and F1 that does not contain ammonium bicarbonate and camphor. The mean weight of the formulation E2 and F2 (containing 10% of ammonium bicarbonate and camphor respectively) before sublimation was 176.1±0.562 mg and 174.5±0.745 mg and that after sublimation of volatile component were 158.9±0.142 mg and 158±0.215 mg.

TABLE 4: TABLET WEIGHT BEFORE AND AFTER SUBLIMATION

Thus, it was concluded that almost all the ammonium bicarbonate and camphor have sublimated from the compressed tablets.

TABLE 5: DISINTEGRATION TIME IN ORAL CAVITY BEFORE AND AFTER SUBLIMATION

Hence, all the quality control parameters of the best formulations E3, E4 and F3, F4 was well within the limit prescribed by I.P. with dramatic decrease in disintegration time. Rapid disintegration of tablets in oral cavity is contributed to the pores created in the tablet upon sublimation of volatilizing component from the compressed tablet although all the formulation with higher content of ammonium bicarbonate and camphor showed extremely low disintegration time than marketed formulation.

They also exhibit higher friability, lower hardness and dull appearance. The problems mentioned were not exhibited by tablet formulations E3 and F3 as shown in table 6. 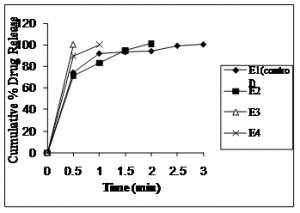 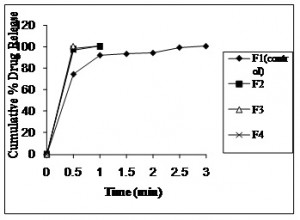 Dissolution profile of marketed tablet: It was observed that 100% drug release of the marketed tablet was found to be within 4 min, as shown in figure 10, which was quite high than tablet prepared by using various superdisintegrants. 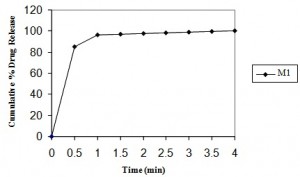 CONCLUSION: Solid dispersion prepared by using β- cyclodextrin effectively masked the taste of Rizatriptan benzoate. Solid dispersion gave good flowability and there was no interaction between drug and β- cyclodextrin. Tablets prepared using sublimating agents were porous in nature and showed faster disintegration and dissolution, which is the major aim.