Categories Menu
Home » DEVELOPMENT AND EVALUATION OF PEPTIDE LOADED MUCOADHESIVE MICROSPHERES: IN AN EFFORT TO IMPROVE NASAL BIOAVAILABILITY OF PEPTIDE

DEVELOPMENT AND EVALUATION OF PEPTIDE LOADED MUCOADHESIVE MICROSPHERES: IN AN EFFORT TO IMPROVE NASAL BIOAVAILABILITY OF PEPTIDE

DEVELOPMENT AND EVALUATION OF PEPTIDE LOADED MUCOADHESIVE MICROSPHERES: IN AN EFFORT TO IMPROVE NASAL BIOAVAILABILITY OF PEPTIDE

ABSTRACT: The nasal drug delivery system has been a promising route for delivery of proteins and peptides as it can avoid degradation in the gastrointestinal tract and metabolism by liver enzymes. However, due to the rapid mucociliary clearance, the bioavailability of proteins and peptides is still low. Hence, mucoadhesive microspheres may prolong the residence time of peptide drugs in nasal cavity and improve their absorption. In the present study chitosan microspheres loaded with a model peptide vancomycin hydrochloride were prepared. Drug-excipient compatibility studies were done to investigate and predict any possible interactions between the components in the formulation. The prime objective of the study was to check the influence of different process variables and formulation parameters on the two key parameters viz particle size and percentage entrapment efficiency of vancomycin loaded chitosan microspheres and to develop a formulation with desirable particle size for nasal delivery and with maximum possible entrapment efficiency. Drug-excipient compatibility study indicates that vancomycin hydrochloride is compatible with the polymer chitosan. Drug loaded chitosan microspheres were successfully prepared by the emulsification-crosslinking technique. The results indicate that the selected process variables and formulation parameters significantly affect the particle size and percentage entrapment efficiency of drug-loaded microspheres. An optimum formulation is obtained using at 4% w/v of chitosan concentration, 1:10 aqueous to oil phase ratio, 0.5 ml volume of glutaraldehyde with a cross-linking time of 1 h, with stirring speed 1000 tpm and 1% w/v concentration of Span 80 as a stabilizer. Further, optimized microspheres show controlled release for 8 h, which follows the Higuchi model.

INTRODUCTION: With the recent remarkable progress in biotechnology, a class of clinically available peptide and protein drugs has been expanding more than ever. Generally, drugs can be administered via various parenteral or non-parenteral routes and the choice of the route normally depends on several key factors such as clinical advantages, convenience of administration, properties of the drugs.

The pharmacokinetic profile needed for therapy and cost of development 1. The nasal mucosa is an attractive site for the non-parenteral delivery for protein therapeutics 2. As a site for systemic absorption of drug, the nasal cavity has many advantages, which include easy access, highly vascular zed epithelial layer, relatively large surface area, porous endothelial basement membrane and avoiding the first pass metabolism 3.

The mucoadhesive microspheres forma gel like layer, which is cleared slowly from the nasal cavity and thus results in a prolonged residence time of the drugformulation 5. Some bioadhesive platforms not only increase residence time at the nasal mucosa but may also increase protein solutions stability 6 and/or enhance protein uptake. These bioadhesives are typically high molecular weight polymers with flexible chains that can interact with mucin through hydrogen bonding, electrostatic, hydrophobic or van der waals interactions 7.

Various biodegradable polymers have been used as carriers for microparticulate drug delivery systems. Chitosan, a cationic polymer, is frequently used for application of macromolecules in nasal cavity due to its strong mucoadhesive property 8. Muco-adhesion is obtained by the ionic interaction between negatively charged groups of the mucosal membrane and positively charged amine groups of the D-glucosamine unit of chitosan 9.

The permeation-enhancing property of chitosanis due to its mucoadhesive property and its ability to transiently open the tight junctions in the nasal mucosa 10. Histological study also confirmed that chitosan does not lead to any significant histological changes in nasal mucosa 11.

In the present study, we have prepared chitosan microspheres containing a test peptide vancomycin hydrochloride; by emulsiﬁcation cross-linking method for nasal delivery. Drug-excipient compatibility study is done to investigate and predict any possible physicochemical interactions between the components in a formulation and to ensure that the selected polymers are compatible with the drug.

Drug-excipients Compatibility Studies: Proper design and formulation of any dosage form require consideration of the physical, chemical, and biological characteristics of drug substance(s) and all excipients to be used in the development of a product. Careful selection of the excipients used in a formulation is the key to the development of a stable and effective dosage form. The drug(s) and the excipients must be compatible with one another to produce a stable formulation. To investigate the chemical compatibility of the drug with the selected excipients, FT-IR was used.

The drug and the selected polymer were mixed physically in the ratio of 1:1, and the mixtures were placed in sealed vials for three months at room temperature. After three months, the sample was subjected to FT-IR study. Samples were finely ground with an infra-red grade of KBr then pressed into pellets, and FTIR spectra were taken in transmission using spectrum GX FT-IR spectro-meter (Perkin Elmer, USA) over the range of 4000-400 cm-1. The obtained FT-IR spectrum was compared against the FT-IR spectra of pure drug and polymer alone.

After a stipulated period of stirring time, the hardened microspheres were centrifuged, washed with hexane thrice, and finally with acetone to remove oil. Finally, the prepared microspheres were dried in a vacuum oven for 24 h at 50 °C and then stored in a desiccator. The effect of different process parameters on the two key parameters viz. particle size and percentage entrapment efficiency of chitosan microspheres was investigated.

Different batches Table 1 of formulations were prepared by varying one parameter at a time and keeping the others constant.

Three hundred freshly prepared and dried microspheres were counted for particle size analysis by using a calibrated optical microscope at a magnification of 40X. The average diameter of 300 microspheres was considered as the mean particle size.

Determination of Percentage Entrapment Efficiency (PEE): Accurately weighed samples of VANCO-loaded chitosan microspheres were added to 100 ml of 0.1NHCl and subjected to ultrasonication. After ultrasonication samples were filtered, and the amount of VANCO was determined spectrophotometrically at 281 nm on UV spectrophotometer (Shimadzu UV-1800, Japan). The percentage of entrapment efficiency was calculated using the following equation:

In-vitro Drug Release Study: The in-vitro drug release test of optimized VANCO loaded chitosan microspheres was performed using Franz diffusion cell with a dialysis membrane (MW cut-off 14 000, HI Media, India). The receptor compartment contained phosphate buffer solution pH 6.8 that was within the pH range in the nasal cavity and maintained at 37 °C ± 1 °C. The membrane was equilibrated before carefully dispersing the sample onto the donor side. The receptor compartment was stirred with a magnetic stirring bar. Samples were periodically withdrawn from the receptor compartment, replaced with the same volume of fresh buffer solution, and assayed by a spectrophotometer (Shimadzu-1800, Japan) at 281 nm. All the experiments were carried out in triplicate, and average values were calculated 14.

Drug-excipients Compatibility Studies: FT-IR was used to investigate and predict any possible physicochemical interactions between the components in the formulation and to ensure that the selected polymer incompatible with the drug. 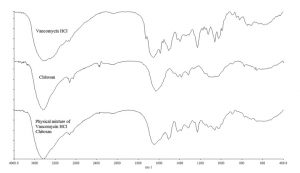 Results of Evaluation of VANCO Loaded Chitosan Microspheres: In thisstudy the VANCO loaded chitosan microspheres were prepared and evaluated for sphericity of microspheres, particle size and drug entrapment efficiency. Results of all the batches are shown in Table 2.

The result indicates that with an increase in the amount of glutaraldehyde the percentage entrapment efficiency of prepared microspheres decreases significantly, this may be due to a decrease in free spaces within the polymer matrix with an increase in cross-link density.

Further, during the cross-linking and hardening process, the microspheres water is exuded from the polymer matrix, which also takes away the dissolved drug and may be another contributing factor for the low incorporation efficiency 17. 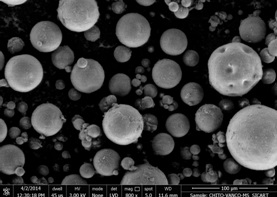 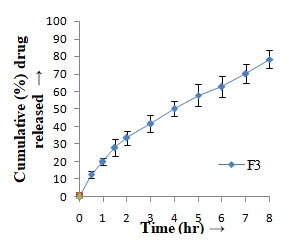 CONCLUSION: In the present study chitosan microspheres containing test peptide vancomycin hydrochloride was prepared successfully. Polymer chitosan found to be compatible with Vanco. The emulsification cross-linking technique has proved to be useful in the preparation of Vanco-loaded chitosan microspheres for nasal delivery. The present study shows that different process variables and formulation parameters show a significant effect on two critical parameters viz., particle size, and drug entrapment efficiency of drug-loaded microspheres. The optimum batch of drug-loaded chitosan microspheres can be prepared by using chitosan concentration at 4%, w/v aqueous to oil phase ratio 1:10, the volume of glutaraldehyde 0.5 ml, one-hour cross-linking time, at 1000 rpm stirring speed and 1% concentration of span 80 as a stabilizer. The optimized microspheres show a controlled release for 8 h, which follows the Higuchi model, indicating release from chitosan microspheres was diffusion controlled.

ACKNOWLEDGEMENT: The author’s acknow-ledge the financial support received from the All India Council for Technical Education (AICTE), for this project. Will also like to acknowledge SICART, Anand, and Gujarat for providing us the technical support.