Ropinirole hydrochloride is indicated in Parkinson’s disease and Restless leg syndrome. In advanced Parkinson’s disease the usual dose of Ropinirole hydrochloride is 0.25 to 5 mg three to four times a day. Hence, an attempt was made to develop a once-a-day controlled release Osmotic drug delivery system. This may offer significant patient benefits by providing enhanced efficacy and reduced side effects and may also reduce the number of daily doses compared to conventional therapies. An oral push-pull system that can deliver Ropinirole hydrochloride for extended period of time has been developed and characterized. A bilayer osmotic drug delivery system was developed using drilling technique. The push layer swells releasing the drug at a controlled rate. An optimized system was selected to study the effect of pH of dissolution medium and the effect of agitation intensity. The drug release was found to follow zero order kinetics. The developed push-pull osmotic system showed the desired once-a-day release kinetic.

Push-pull osmotic drug delivery features a semi-permeable, rate-controlling membrane surrounding an osmotic core, which contains a push layer and a drug layer. The rate-controlling membrane consists of cellulose acetate with various hydrophilic-hydrophobic plasticizers. The push layer swells releasing the drug at a controlled rate. This may offer significant patient benefits by providing enhanced efficacy and reduced side effects and may also reduce the number of necessary daily doses compared to conventional therapies 5-7.

Parkinson’s disease (PD) is a neurodegenerative disorder. It has worldwide incidence of 20 in 100,000 and is estimated to cost £ 700 million per year in drug treatment 8-11.

Formulation development: Bilayered osmotic tablets of Ropinirole hydrochloride were prepared using conventional wet granulation technology. Drug and excipients were mixed together to produce 500 tablets. The alcohol(Isopropyl alcohol) solution of PVP K 30 was added to produce a damp mass, which was passed through a # 16 sieve and dried in a hot air oven at 45̊ C for 30 minutes. The dried granules were then passed through a # 30 sieve and mixed with lubricants. Granules for the push compartment were prepared in a similar fashion and for identification a coloring agent (Iron oxide) was added to the push layer. The tablets were compressed at an average weight of 95 mg. The weight of the push compartment was adjusted to 45mg and the pull compartment weight was adjusted to 50 mg.

Coating of Bilayer Tablets: The tablets were coated with cellulose acetate (5% w/v in Dichloromethane:Ethanol(90:10) along with a suitable plasticizer. The coating process parameters were optimized as follows: Pan diameter-6 inch; spray gun (pilot scale); baffles- 4; speed of pan-30-35rpm; spraying rate10-15 ml/min; temperature-20-25̊ C. The coated tablets had smooth, uniform surfaces without any defects 13-14. 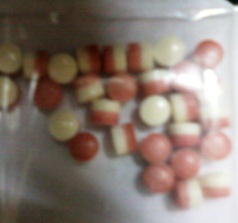 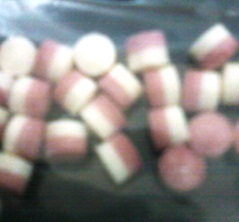 Drilling of Bilayer Tablets: The bilayer coated tablets were drilled by Cameron microdrillpress 15.

Drug was evaluated for following parameters:

Granules were evaluated for following parameters:

Effect of plasticizer on Drug Release: In osmotic drug delivery system coating of semipermeable polymer is given in order to control water entry in to the system. The water in flow can be modulated by different plasticizers. So formulations were made using water soluble (PG) and water insoluble (TEC) plasticizers to determine their effect on drug release.

Effect of pH of dissolution medium on Drug Release 16: An osmotically controlled release system delivers its contents independent of external variables. Hence to assess the effect of pH on the in vitro release profile, dissolution studies were carried out in 0.1N HCL, pH 4.5 acetate buffer and pH 6.8 phosphate buffer.

Effect of Agitation Intensity 16, 17: In order to assess the effect of the agitational intensity of the release media, the release studies of the optimized formulation were carried out in a dissolution rate test apparatus II at various rotational speeds. The paddle rotation speed was adjusted at rates of 50, 75and 100 rpm. The samples were withdrawn at predetermined intervals and analyzed after filtration through 0.45µm nylon membrane filters.

Stability Studies 18: The optimized formulation that gave the desired zero order release profile over a period of 24h was selected, strip-packed and subjected to stability studies as per ICH guidelines 40oC/75%RH. Samples were withdrawn at time intervals of 0, 2, 4, 6, 8, 10 and 12th weeks. The samples were evaluated for appearance, drug content and in vitro-release.

RESULTS AND DISCUSSION: The push-pull bilayered osmotic tablet was designed to have a tablet core consisting of drug along with osmagen, low viscosity hydrophilic polymer and other conventional excipients. The push compartment consists of swellable polymer and osmagen. The compressed bilayer tablet was surrounded by a membrane consisting of a semipermeable membrane-forming polymer and a plasticizer capable of improving the film-forming properties of the polymers. The semipermeable membrane-forming polymer was selected in regard to its permeability to aqueous fluids but substantially impermeable to the components of the core.

In operation, the core compartment imbibes aqueous fluids from the surrounding environment across the membrane. The drug is released through the hole present in the membrane. Cellulose acetate was used as water-insoluble polymer and Propylene glycol/Triethylcitrate were used as water-soluble and water-insoluble plasticizers, respectively. Formulation development involved trials using different ratios of types of polymers and osmotic agents in both layers. 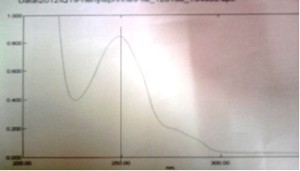 The figure shows that the drug is having λmax of 250nm. And that was used for the analysis purpose.

Interaction Study: DSC thermograms of drug and formulation F14 were compared. In both thermograms drug peak appears between 240̊ C-250̊ C. It proves that there is no interaction between drug and other excipients. 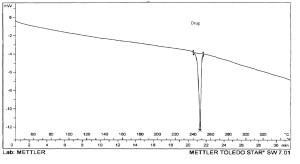 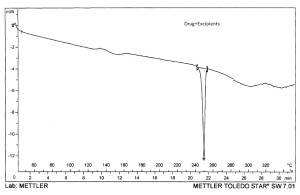 Effect of type of plasticizer on Drug Release: Initial batches (F1 and F2) were prepared using different plasticizers. The core tablet formulation was kept constant and the plasticizer was optimized to provide zero-order drug release kinetics for extended period of time. The formulation containing PG released drug quickly and more than 80% of drug was released in 16 hours. In case of TEC drug release was consistent and it was able to prolong drug release up to 24 hours. 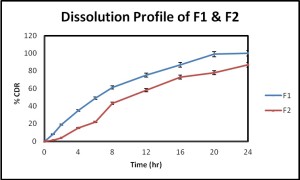 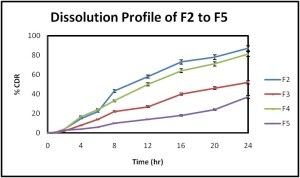 Effect of Osmogen on drug release: Formulations F6 to F14 were formulated with different ratios of Sodium chloride in both layers. Formulations F6, F7 and F8 contains osmogen only in push layer at the level of 10%, 20% and 30% weight of push layer respectively. In formulations F9-F14 Sodium chloride is present in both layers in different ratios. From all batches formulations F10, F11, F13 and F14 were able to control the drug release for up to 24 hours. Formulation F14 was optimized because its granules were having better flow property with regression coefficient (zero order) of 0.99. 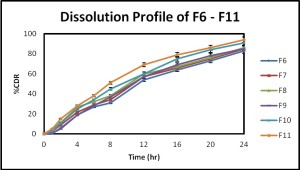 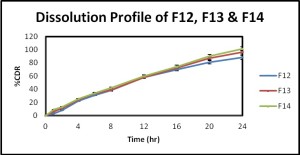 Effect of pH: When formulation F14 was subjected to in vitro release studies in buffers of differing pH and in distilled water, no significant difference in release profiles was observed. In other words 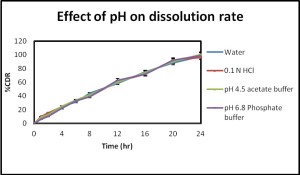 FIGURE 11: EFFECT OF pH ON DISSOLUTION PROFILE OF F14

Effect of Agitation Intensity: The effect of different agitation rate on formulation F14 was also studied at 50, 75 and 100 rpm. There was no significant change in the drug release rate was observed. Hence, it can be concluded that the release rate of push-pull osmotic tablet was independent of agitational intensity. 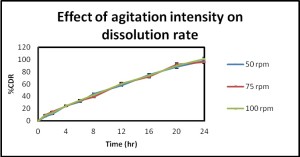 FIGURE 12: EFFECT OF AGITATION INTENSITY ON DISSOLUTION PROFILE OF F14

Stability Studies: The formulations subjected to stability studies at each of the three temperature and humidity conditions were evaluated in terms of appearance, drug content and in vitro drug release. No significant changes were seen in the physicochemical parameters of the formulations over a period of 3 months. Stability data regarding appearance, drug content and texture are given in Table 9.

TABLE 9: STABILITY DATA OF FORMULATION F14 AS PER ICH GUIDELINES 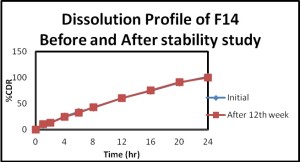 CONCLUSION: A push-pull osmotic tablet was developed for Ropinirole hydrochloride. The desired zero-order release profile was obtained by optimizing the concentrations of Osmogen and polymer in both the layers. From the results it was observed that the drug release increases with the amount of osmogen due to the increased water uptake and increased driving force for drug release. The drug release was further retarded using a proper concentration of PEO to achieve the desired zero-order release profile. The developed stable system was found to deliver Ropinirole hydrochloride at zero-order rate kinetics for an extended period of time independent of pH and agitational intensity. The system was easy to formulate and cost effective.