In the present study, the microspheres containing Verapamil hydrochloride xanthan complexes encoated with ethyl cellulose by emulsion solvent evaporation method. DSC shown absence of any new endothermic peak, disappearance of no shift of endothermic peak confirmed that there is no any interaction between drug, excipients and the drug was thermally stable. Drug polymer ratio was altered while the other formulation parameters were kept constant and percentage yield, incorporation efficiency, particle size and distribution of the microcapsules were analyzed. The microcapsules studied for effects of the increase polymer ratio in formulation. The dispersed phase viscosities were evaluated by comparing with variations in particle size and distribution of the microcapsules  and the effect of the variation in polymer ratio on drug dissolution was evaluated. The percentage drug released at the end of 12th h (VXM2) was found be 95.95%. respectively. The mechanism of drug release may also be dissolution and diffusion mechanism controlled released formulation. The stability of Verapamil hydrochloride loaded microcapsules (VXM2) formulation was stored at 40oC±2oC/75% RH ±5% RH for three months.

Natural polysaccharides and their semi-synthetic derivatives represent a group of polymers that are widely used in pharmaceutical dosage forms and obtained usually as plant exudates containing various sugars moieties other than glucose and having significant quantities of oxidized groups in adjunct to their normal polyhydroxy group. These materials result from normal metabolic processes, and many times, they represent the reserve carbohydrate in that system1. Natural polymers such as gaur gum, chitosan, gellan gum, alginic acid, konjac gum, etc. were commonly used for the retarded release of drugs but they have fairly low adhesive properties2.

Verapamil hydrochloride (VH) is calcium antagonists are being used effectively in the treatment of several cardiovascular disorders, particularly angina pectoris, supraventricular tachycardia and hypertension.  It is established that, as a result of oral usage, 90% of VH is absorbed and then it reaches maximum plasma concentration within 1–2 h.

However, due to the extensive ﬁrst pass hepatic excretion, it has such low bioavailability 10–20% of oral dose. VH has nonlinear pharmacokinetic because of its saturation of pre-systemic metabolism leads to first pass effect which resulting in nonlinear absorption.

Drug content estimation: Determination of Verapamil hydrochloride the microcapsules were performed for three randomly picked up samples from each formulation.  Each, 50 mg of sample was pulverized and dissolved in 50 ml of methanol, the resulting solution was filtered and further diluted with methanol and concentration of the Verapamil hydrochloride was determined spectrophotometrically at 278 nm using UV-2401 (Shimaduz 2401, Japan).

Infra-red Spectrophotometry: There is always possibility of drug excipients interaction in any formulation due to their intimate contact. IR spectroscopy is one of the most powerful analytical techniques, which offers possibility of chemical identification. The IR-spectra of Verapamil hydrochloride xanthan microcapsules were obtained by KBr pellet method.

In-vitro drug release studies of complexes and microcapsules: In-vitro drug release studies of prepare microcapsules10 were carried out using USP XXIII Type-II (paddle-type) dissolution test apparatus. A quantity of prepared microcapsules 100 mg were placed in a muslin bag (2µm) and tied to the paddle. The 10 ml samples were withdrawn at regular intervals. The volume withdrawn at each time interval was replaced with fresh quantity of phosphate buffer of pH 6.8 buffer as dissolution fluid. The samples were filtered and analyzed by UV-spectrophotometer at 278 nm. All the formulations, the dissolution was carried out in triplicates. The percentage of drug release at different time intervals (0-12 h) was calculated using the PCP-Diss-V3 software and plotted as the cumulative percent release versus time.

Drug Release Kinetics Study: To describe kinetics of drug release from the mathematical models, such as zero order, first order and Higuchi square root of time model were used. The criteria for selecting most appropriate model were based on goodness of fit test.

Zero Order Kinetics: A zero order release would be predicted by the equation -4 [11]

When the data is plotted as cumulative percent drug release versus time, if the plot is linear then the data obeys zero order release kinetics with a slope equal to K0.

Higuchi’s Model: Drug released from the matrix devices by diffusion has been described by Higuchi’s classical diffusion equation 12 -5.

When the data is plotted, according to Higuchi’s equation (Q=Kt½), cumulative drug release versus square root of time yields a straight line, indicating that the drug was released by diffusion mechanism.  The slope is equal to ‘K’.

Peppa’s Model: In order to understand the mode of release of drug from swellable matrices, the data were fitted to power law equation 13- 6.

When the data is plotted as log of drug released versus log time, it yields a straight line with a slope equal to ‘n’ and the ‘K’ can be obtained from y-intercept.

Stability Studies: The stability refers to the time frame from initial preparation and packaging during which the dosages continue to comply with quality and purity requirements. As a result of the marginal storage stability of many drugs, long term storage of drug dosages forms often goes along with conformational changes of the drugs incorporated and consequently, purity requirements cannot be fulfilled any longer. In order to evaluate storage stability of prepared microcapsules, samples were stored at 40 ± 2⁰C/75±5% RH for three months. Samples were withdrawn at intervals of 30, 60 and 90 days as per ICH guidelines. Prepared formulations evaluated for drug content and dissolution14.

RESULT AND DISCUSSION: The physical properties of different formulations of microcapsules were shown in Table 3. The DSC curve of pure Verapamil hydrochloride exhibited a single endothermic response corresponding to the melting of drug. Onset of melting was observed at 142.1°C as shown in Figure 1. Xanthan showed an endothermic peak at 203 °C where as DSC thermogram of ethyl cellulose showed a peak at higher.

In Dispersion systems, the drug endothermic peak was observed at 148.3°C with Xanthan and Ethyl cellulose. DSC showed absence of any new endothermic peak, disappearance of no shift of endothermic peak confirmed that there is no any interaction between drug and excipients and the drug is thermally stable. 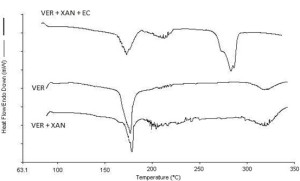 TABLE 3: THE COMPOSITION, PERCENT CONTENT AND PERCENT YIELD OF COMPLEXES

The drug entrapment efficacies of complexes increase with increase in concentration of hydrophilic gum. The dissolution rate profile of Verapamil hydrochloride-xanthan complexes in the different concentration ratios are shown in Figure2. The ratio of xanthan gum was increase, the complexes show increased retardation of the drug release.

Additionally, more intense agitation prevents agglomeration of ‘immature’ microcapsules more successfully. It is shows from Table4 that drug complex: coating polymer ratio appears to influence the mean diameter of microcapsules, when the drug complex: polymer ratio is high and the proportion of larger particles formed. The viscosity of the polymer solution at such high drug loading is very high and is responsible for the formulation of larger droplets that leads to increasing mean diameter of microcapsules. 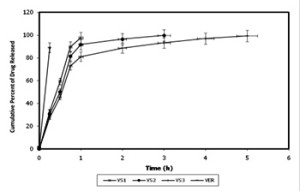 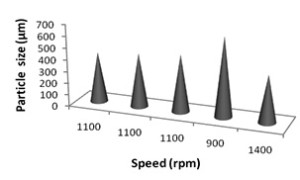 Effect of percentage of Polymer: As the drug complex: polymer ratio increases from 1:1 to 1:3 the yield of microcapsules as shown in Table4. It shows that high amount of polymer is required to encapsulate the drug effectively, when polymer solution concentration was above 50 %w/w with respect to drug. The good entrapment efficiency was achieved by increasing drug: polymer ratio. 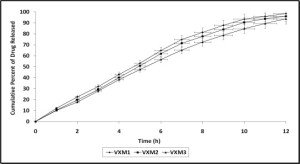 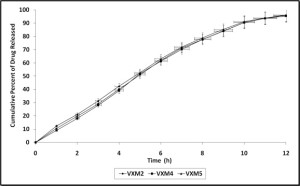 The drug release rate increased as the microsphere size decreased for both microsphere formulations. The lower entrapment efficiency at 700 rpm agitation speed may be due to inadequately stirring of droplets, which leads to increased chances of coalescing. At higher agitation speed i.e., 1400 rpm, the globules were forced towards the wall of the flask due to high rotation and it ultimately lowers the contact time between polymer and drug molecules. But at 1100 rpm, no sticking of polymeric material around the walls of flask was observed which may leads to improved drug entrapment efficiency.

An increasing stirring rate causes a decrease in the average diameter size of microcapsules. The percentage drug released at the end of 1st and 12th h shown in Figure 6, VXM2 and MP were found be 10.59%, 11.76%, and 95.95%, 96.64% respectively. The mechanism of drug release may also be dissolution and diffusion mechanism controlled released formulation. 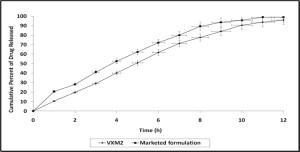 FIGURE 6: COMPARISON OF CUMULATIVE % DRUG RELEASE VERSUS TIME OF VXM2 AND   MARKETED PRODUCT

The microcapsules were discrete, uniform and spherical in shape shown in Figure 7 and 8. The surface Verapamil hydrochloride complex coated ethyl cellulose of microcapsules was very smooth but having few small pores on the surface was observed. The stability of Verapamil hydrochloride loaded microcapsules (VXM2) formulation was stored at 40oC±2oC/75% RH ±5% RH for three months. Samples were withdrawn at intervals of 30, 60 and 90 days. The VXM2 formulation retained drug content and did not change to a grater degree from the initial values (table 5). 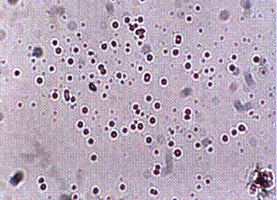 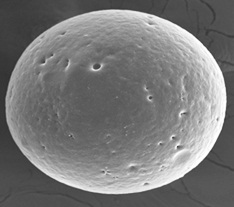 ACKNOWLEDGEMENTS: The authors acknowledge the facilities provided Head, Department of Pharmaceutical Sciences, Rashtrasant Tukadoji Maharaj Nagpur University, Nagpur (India) in carrying out the work. The authors would like to thank  Glenmark Ltd., Mumbai and TIC Gums, USA, for providing gift sample of the drug and gums respectively.