ABSTRACT: This project involves in the development of sustained release matrix tablets of Gemigliptin. Which is an oral anti-hyperglycemic agent designed for the management of non insulin dependent diabetes mellitus (NIDDM). The basic goal of therapy is to achieve a steady sate blood level that is therapeutically effective and non toxic for an extended period of time. The objective in dosage form design is to optimise the delivery of medication to achieve the control of therapeutic effect in the face of uncertain fluctuation in the in-vivo environment in which drug release takes place. Eight formulations of Gemigliptin 50mg were formulated by admixing with HPMC K4M, Carbopol were used as rate controlling polymers in different concentrations, Micro crystalline cellulose, Lactose, Talc, Magnesium stearate. Pre-formulation and post-formulation studies were carried out and the values obtained, satisfies the pharmacopoeial specifications. Several kinetic models were applied to the dissolution profiles to determine the drug release kinetics. Of all the formulations F5 exhibited gradual and completion extended release for Gemigliptin. The F5 (carbopol) with 1:1 ratio produced 89% drug release at end of the hour.

INTRODUCTION: Tablets are solid oral dosage forms containing ingredients with or without filler material 1. Sustained release dosage forms are the drug delivery systems that are designed to achieve prolonged therapeutic effect by continuously releasing medication over an extended period of time after administration of single dose. The goal in designing oral sustained delivery system is to reduce the frequency of the dosing or to increase effectiveness of the drug by localizing at the site of action, reducing the dose required or provide uniform drug delivery, thereby also improving patient compliance 2.

Diabetes is an extremely common disorder which affects many people. It is defined as a heterogeneous metabolic syndrome characterised by chromic hyperglycaemia i.e. increase in blood levels with disturbances in carbohydrate, fat and protein metabolism. It is the most common occurring chronic endocrinal disorder which affects almost each and every cell of the human body. Gemigliptin is used in the management of non insulin dependent diabetes mellitus NDDM 4.

Gemigliptin is an oral anti- hyperglycaemic agent of the new dipeptidyl peptidase-4 inhibitor class of drugs. It is known that glucose lowering affects of DDP-4 inhibitors are mainly mediated by Glucagon like peptide-1 and Gastric inhibitory polypeptide (GIP) incretin hormones which are inactivated by DDP-4 5. Gemigliptin was rapidly absorbed after single oral dosing and the compound was eliminated with a half-life of 3.6, 5.2, 5.4 and 30.8 hrs in the rat, dog, monkey and humans respectively. Bioavailability of gemigliptin in the rat, dog, monkey was species dependent with the values of 94%, 73%, 26% respectively. In clinical studies Gemigliptin monotherapy (50mg for 12 week) improved the HbA1C, FPG level, oral glucose tolerance test results, beta cell function and insulin sensitive measures and was well tolerated in subjects with type 2 diabetes 6.

Materials: The various materials in our study include Gemigliptin, HPMC K4M, Carbopol, Microcrystalline cellulose, Lactose, Talc and Magnesium stearate. All other materials used were of analytical grade.

Gemigliptin and polymers such as HPMC K4M, Carbopol were accurately weighed, geometrically mixed and passed through #40 mesh and Lactose is used as diluents 9 and Microcrystalline cellulose as binder were accurately weighed and passed through #40 mesh 10. Both mixtures were mixed for 5 minutes as a dry mixing and the mixture of talc and magnesium stearate 1:1 ratio was used as lubricant added to the mixture and mixed for 2 minutes 10. Then the mixtures were compressed into tablets using 8 station rotary compressed machines with punch size of 9 mm with a hardness of 3 to 5 kg/cm2.

TABLE 1: COMPOSITION OF DIFFERENT FORMULATIONS FROM F1 TO F8

Before compression the granules were evaluated for their flow and compressibility characteristics 11.

The diameter of the powder cone measured and angle of repose was calculated using the following equation:

Where h and r are the height and radius of the powder cone, ϴ is the angle of repose.

An accurately weighed quantity of the powder (W) was carefully poured into the graduated cylinder and volume (Vo) was measured. Then the graduated cylinder was closed with the lid and set into the tap density tester (USP).The density apparatus was set for 100 taps and after that the volume (Vf) was measured and continued operation till the two consecutive readings were equal.

Carr’s index (CI) is an important measure that can be obtained from the bulk and tapped      densities. In theory, the less compressible a material the more flowable it is.

It is the ratio of tapped density and bulk density. Hausner found that this ratio was related to inter-particle friction and, as such, could be used to predict powder flow properties. Generally a value ≤ 1.25 indicates good flow properties, which is equivalent to 20% of Carr’s Index.

Tablet hardness was measured by using Monsanto hardness tester. From each batch six tablets were measured for the hardness and average of six values was noted.

WI= Individual weight of the tablets

WA= Average weight of the tablets

Tablets must comply with the requirements for uniformity of content specified in is calculated by doing assay for a particular drug. Over ten tablets were selected randomly and average weight was calculated. Tablets were crushed in a motor and accurately weighed amount of tablets triturate was taken for analysis and it was diluted with the phosphate buffer solution. The content was shaken well and sonicated for five minutes for dissolving the drug. Appropriate dilutions were made. The drug content was estimated by recording the absorbance at 257nm.

Dissolution test is to provide critical in-vitro drug release information for quality control purpose i.e. to predict in-vivo drug release profiles 12. Dissolution studies were carried out for all the formulations employing USP-II paddle method and 900 ml of phosphate buffer solution as the dissolution medium operated at 50rpm. The medium was allowed to equilibrate to temperature of 37 ± 0.5°C. The samples were collected after end of the hour at intervals of 1, 4, 8, 12, 16, 20, 24 hr, as per parameters showed in Table 2. The samples were analyzed spectrophotometrically at 257nm using UV-spectrophotometer.

Ko is zero-order rate constant expressed in units of concentration/time and t is a time.

Co is the initial concentration of drug and K1 is the first order constant.

KH is the constant reflecting the design variables of the system.

Where   Mt/M  is a fraction of drug released at the time t, K is the exponent. The n value is used to characterize different release mechanisms.

The formulations prepared were subjected to various pre-formulation and post-formulation evaluation studies. The results obtained were agreeing the pharmacopoeial standards.

Calibration curve of the pure drug Gemigliptin was prepared in the concentration range of 1 to 5 µg/ml at the wavelength of 257nm using 6.8 pH phosphate buffer solution. The calibration curve showed good linearity and regression coefficient was 0.999 (r2), showed in Fig. 1. 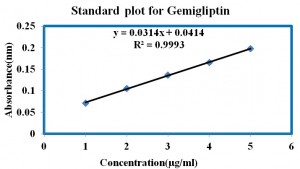 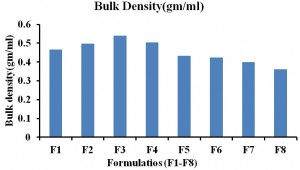 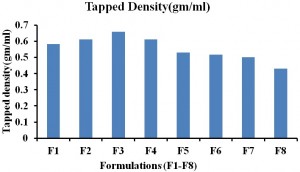 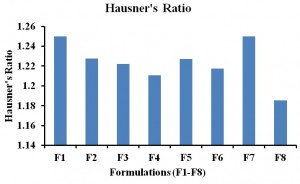 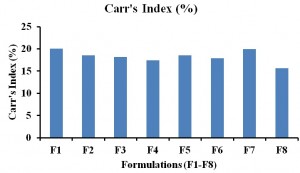 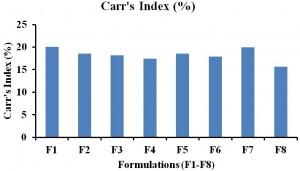 FIG. 6: COMPARISON OF ANGLE OF REPOSE OF GEMIGLIPTIN POWDER BLENDS FOR F1 TO F8 FORMULATIONS 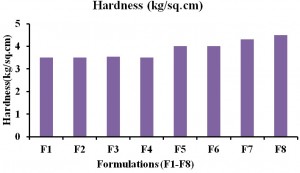 FIG. 7: COMPARISON OF HARDNESS (KG/CM2) OF GEMIGLIPTIN TABLETS FOR F1 TO F8 FORMULATIONS 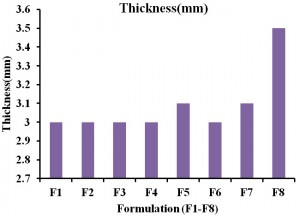 FIG. 8: COMPARISON OF THICKNESS (MM) OF GEMIGLIPTIN TABLETS FOR F1 TO F8 FORMULATION 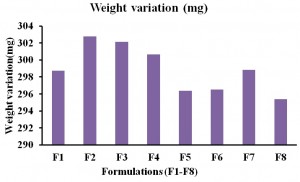 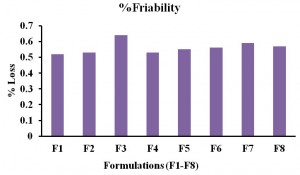 FIG. 10: COMPARISON OF % FRIABILITY OF GEMIGLIPTIN TABLETS FOR F1 TO F8 FORMULATIONS 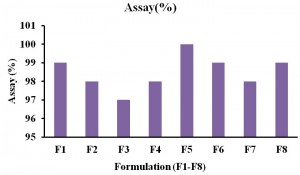 FIG. 11: COMPARISON OF ASSAY OF GEMIGLIPTIN TABLETS FOR F1 TO F8 FORMULATIONS

Among all the eight formulation F5 showed the 89% drug release at end of the time was determined by UV-visible spectrometer at 257nm. The results shown that the release of drug depends not only on the nature of matrix but also upon the drug polymer ratio. As the percentage of polymer decrease, the kinetics of release increased. The comparative graphs of all the formulations for drug release were plotted shown in the Fig. 12, 13, 14 15. 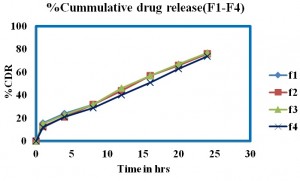 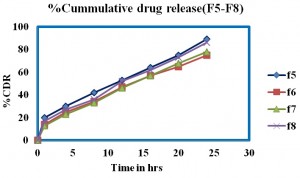 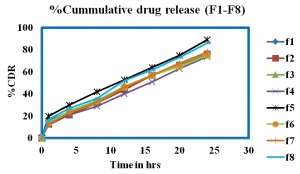 In-vitro dissolution studies of pure drug Gemigliptin were performed and the drug release profile obtained was compared with the drug release of optimized formulation as shown in the Table 5. Comparison graph was plotted and showed in the Fig. 15. 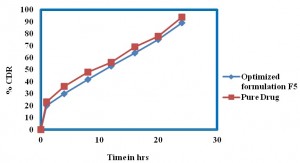 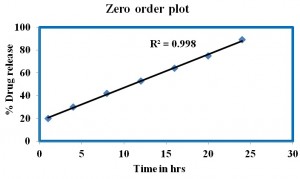 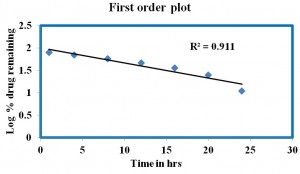 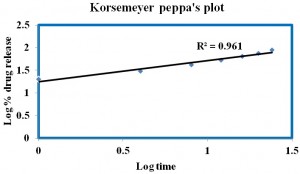 The release profile of Gemigliptin optimized formulation F5 was processed for comparison of different orders of drug release and to understand the linearity liaison, i.e., Kinetic principles. The data were processed for regression analysis. In vitro release data of time points between 1 to 24 hrs were considered and treated for following kinetic principles.

In order to explore more precise mechanism of release of Gemigliptin from in domicile developed SR tablets, the dissolution data was fitted to the well-known exponential equation i.e., Korsemeyer-peppa’s equation, which is often used to describe the drug release behaviour from polymeric systems. After plotting the formulation showed r2 = 0.961 and slope (n) value of 0.518. A value of n = < 0.45 indicates Fickian diffusion, 0.45 < n < 0.89 indicates non-Fickian diffusion, n = 0.89 is case-II transport and n > 0.89 is Super case-II transport. The n value obtained is between 0.45 < n < 0.89, hence the results concluded that non-Fickin mechanism for drug release. The relative complexity of this formulation and its components may indicate that the drug release is controlled by diffusion process and non-fickian mechanism.

The different peaks of drug, polymer and their physical mixture indicate all groups and characteristics of the drug were not altered. There is no significant interaction in drug and polymer. Physical mixture of drug and polymer was characterised by FTIR spectral analysis for any physical as well as chemical alteration of drug characteristics. From results it was concluded that there was no interference in the functional group as the principal peaks of Gemigliptin were found to be un-altered in the drug polymer physical mixture as shown in the Fig. 20, 21, 22, 23. 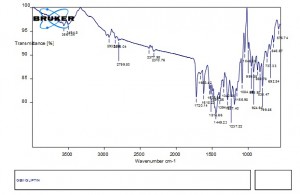 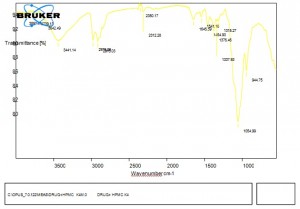 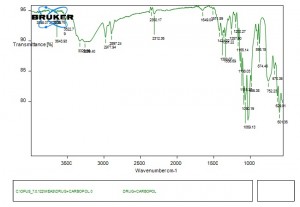 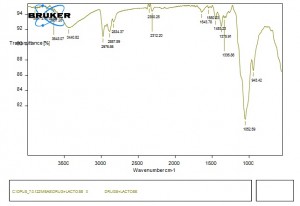 CONCLUSION: The drug release rate of the different formulation, among the hydrophilic matrix formers was in the subsequent order Carbopol, HPMC K4M. The results of in-vitro dissolution study indicated that the F5 as an optimized one since it successfully sustained the drug release at end of the hour and compared with pure drug and the drug release patterns obtained was within the pharmacopoeial limits. Direct compression is feasible for development of once a day controlled release tablet of Gemigliptin provided with careful selection of optimised concentration of Carbopol. The optimised formulation prepared with drug: polymer (carbopol) ratio 1:1 showed 89% drug release at end of the hour. The release kinetics shows that the release of drug followed Zero order release in all the formulation. From the Korsemeyer-peppas study, the n value of the formulations shows that the release profile obeys Fickian and Non-Fickian diffusion mechanism.

On the basis of result it was concluded that sustained release tablets of Gemigliptin prolong the time for absorption as well as bioavailability and thus better patient compliance can be achieved. The present study demonstrated the successful preparation of stable once daily sustained release matrix tablet of Gemigliptin thus the objectives envisaged in this work were achieved.

ACKNOWLEDGEMENT: The authors sincerely utter thanks to the Management, Department of pharmaceutics of Joginpally B. R. Pharmacy College and Jawaharlal Nehru Technological University, Hyderabad for providing amenities to carry out this research work. Authors are thankful to Rainbow Pharma Training Labs Ltd, Hyderabad for providing API and Excipients.