ABSTRACT: The present study outlines a systematic approach for Formulation and Evaluation of Immediate release Tablets of Abacavir and Zidovudine tablet.  Combination of anti retiro-viral creates multiple obstacles to HIV replication to keep the number of off springs low,  reduce the possibility of superior mutations, decrease viral load and potentiate synergistic activity with one another, combining two drugs into one tablet reduces the number of individual medications1. To achieve this goal various prototype formulation trials were taken with varying compositions of diluents and disintegrant and evaluated with respect to their various quality control tests such as Thickness, hardness, weight variation, dissolution, disintegration, hardness and assay. The formula was finalized by comparing the In-vitro dissolution profile of all formulations with the respective individual marketed products.  The in vitro release study was performed in 0.1N Hcl upto 60 min. Among all the formulations, formulation F6 release profile was good as compared to the other formulations. Forced degradation studies at 550C & Stability studies at 40±2ºC/75±5%RH (accelerated condition)  for 1& 3 months indicated that no characteristics changes in formulation. There was no chemical interaction between drugs and excipients.

INTRODUCTION: Acquired immunodeficiency syndrome (AIDS), which threatens to cause a great plague in the present generation HIV weakens the body's immune system and reduces the body's ability to fight infections 2. Anti-HIV medicines do not kill the virus but they slow down or stop the HIV virus from making copies of it-self. This allows the body's immune system to keep working and gives the body a chance to fight other infections. Anti-HIV medicines are most effective when taken in combination with other anti-HIV-medicines. Combination therapy reduces the chances of the virus becoming resistant to a single medicine and also produces synergistic activity. Resistance to medicines makes HIV treatment more difficult 3.

Combination of antiretiroviral creates multiple obstacles to HIV replication to keep the number of off springs low,  reduce the possibility of superior mutations, decrease viral load and potentiate synergistic activity with one another, combining two drugs into one tablet reduces the number of individual medications 4.

Abacavir and zidovudine are absorbed from the GIT & provide the oral bioavailability of 83% and 75% respectively. These were formulated in immediate release dosage forms due to their half lives 1.54±0.63hours & 0.5 to 3hours respectively and cannot retain for prolonged periods in stomach, thus providing drug to the absorption sites in a conventional manner and maintains the magnitude of drug effect. In the present study immediate release tablets of abacavir & zidovudine were prepared with super disintegrant (Sodium Starch Glycolate) and a polymer (MCC) to provide immediate release within 60minutes.5

Preparation of abacavir and zidovudine tablets:

Abacavir and Zidovudine tablets were prepared by direct compression method. All the ingredients were weighed accurately. The drug was mixed with the release rate enhancing disintegrants and other excipients, except magnesium stearate, in ascending order of their weight. The powder mix was blended for 20min to have uniform distribution of drug in the formulation. Then, magnesium stearate was added and mixed for not more than 1 min (to ensure good lubrication.) About 850 mg of the powder mix was weighed accurately and fed into the die of single punch machinery and compressed using 8 mm flat- surface punches 6. Formulae is mentioned in Table 1.

These tablets were subjected to evaluation for the following parameters.

Hardness of the tablets was determined by using Monsanto hardness tester. The tablet to be tested is held in fixed and moving jaw and reading of the indicator adjusted to zero. Then force to the edge of the tablets was gradually increased by moving the screw knob forward until the tablet breaks. The reading was noted from the scale which indicates the pressure required in kg to break the tablet. The hardness of the tablets depends on the weight of the materials used, space between the upper and lower punches at the time of compression and pressure applied during compression.

The Roche friability test apparatus was used to determine the friability of the tablets.  Randomly selected twenty pre-weighed tablets were placed in the apparatus and operated for 100 revolutions and then the tablets were reweighed. The acceptable limits of the weight loss should not be more than 1%. The percentage friability was calculated according to the following formula.

It is desirable that all the tablets of a particular batch should be uniform in weight. If any weight variation is there, that should fall within the prescribed limits:

±5% for tablets weighing more than 315mg

Twenty tablets were taken randomly and weighed accurately. The average weight is calculated by

Over ten tablets were selected randomly and average weight was calculated. Tablets were crushed in a mortar and accurately weighed amount of tablets triturate was taken for analysis, and it was diluted with the 0.1 N HCL. The content was shaken well and kept for 30 minutes for dissolving the drug and appropriate dilutions were made. The drug content was estimated by recording the absorbance at 277nm.

Dissolution studies were carried out for all the formulations combinations in triplicate, employing USP-II paddle method and 900ml of pH 0.1 N Hcl as the dissolution medium operated at 50RPM. The medium was allowed to equilibrate to temp of 37°c + 0.5°c. The samples were collected after one hour at intervals 10, 20, 30, 40, 50, 60 minutes. The samples were analyzed spectrophotometrically at 277 nm using UV-spectrophotometer 8. Dissolution parameters were mentioned in Table 2.

Accelerated stability testing: These are the studies designed to increase the rate of chemical degradation and physical change of a drug by using exaggerated storage conditions as part of the formal stability testing program. The data thus obtained, is by preserving the samples for the particular time period at 400C±20C/75% RH ± 5% RH.10

A series of tests designed to obtain information on the stability of a pharmaceutical product in order to define its shelf-life and utilization period under specified packaging and storage conditions (ICH, 1995).11

Abacavir & zidovudine tablets were formulated with varying compositions of excepients (F1-F6) out of all the formulations F6 showed good release character by the end of 1hour and stood as optimized formulation. Among the all six formulations F6 was selected as the best formulation by comparing with the marketed products. The formulation F6 contains 2-4% of Sodium starch glycolate (composition at which it acts as a super disintegrant) as disintegrating agent.

The powder blend containing equal ratios of talc and Magnesium stearate offered good flow properties. Powder satisfied all Pharmacopoeial requirements and it showed excellent tableting properties and immediate drug release drug within 1hr. This could be advantageous and the combination drugs were released before their respective half-life.

The Pre compression parameters were the primary requirements to determine whether the specific material was suitable for the targeted formulation or not. The aim was to formulate the tablet formulation with direct compression method, so it was mandatory to know the bulk density, tapped density, Carr’s index, Hausner’s ratio and angle of repose as those were the official requirement while choosing any material for its dosage form formulation. Table 3 shows the results evaluated parameters of Bulk Density, Tapped Density, Carr’s index, Hausner’s ratio, Angle of Repose for various tablet formulations. The result of evaluation parameters clearly indicates its suitability to be the material of choice for formulation.

Abacavir and zidovudine are said to be compatible by comparing these results with their respective individual marketed products (ziagen, retrovir) irrespective with the branded drug Trizivir (combination of abacavir, zidovudine and lamivudine). These were performed by physical parameters and chemical parameters.

The compatibility studies provide the frame work for the drugs combination with the excipients in the fabrication of the dosage form. The study was carried out to establish that the therapeutically active drugs have not undergone any changes, after it has been subjected to processing steps during formulation. Compatibility studies are carried out by mixing definite properties of drugs and excipient and kept in glass vials, which is stored at 55°C for one month. 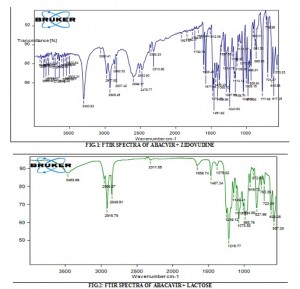 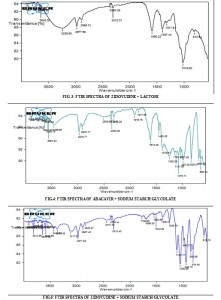 In the FTIR graphs, optimized formulation containing the pure drug, the excipients interaction and different functional groups stretching was mentioned. The FTIR analysis was carried out to find possible drug-polymer interactions. The FTIR studies were performed to standard drugs Abacavir, Zidovudine and polymers. As a pure drug the FTIR curves shows the options of the strong interactions between the components and suggested drug. From the observations it was concluded that all the formulations containing drug and different excipients does not have any interactions

Compared to conventional tablets of individual marketed products of abacavir (ziagen) & zidovudine (retrovir), all formulations showed immediate release by the end of 1hour showed in Table 5. The in-vitro drug release profile of tablets from each batch (F1-F6) was carried in 0.1N HCl, for an hour by using USP II paddle type. The F1 - F6 formulations were done with varying compositions of MCC, Lactose, SSG (Sodium starch glycolate) which is showing immediate release and the total drug was released at the end of 1 hr. In the formulations (F1-F6) MCC and lactose were used as major and minor diluents and hence used in same compositions in each formulation where as SSG varies from formulation to formulation and plays a vital role in release mechanics. Talc and Magnesium stearate were used in same compositions in all the formulations which are only helpful in keeping the tablet intact during compression process. The formulations F1-F4 were done with decreasing amounts of diluents & increasing amounts of disintegrant (SSG) which is showing the release comparatively very less at the end of 60 minutes.

All the above- described models for selecting the release profile were applied for formulations F1-F6. The best fit model in case of all the formulations was determined by considering the higher corelation coefficient value (r). The release rate kinetic data for the F6 was best explained by First order equation, as the plots showed the highest linearity (R2 = 0.979), followed by Higuchi’s equation (R2= 0.981) hence, the drug release was best fitted in First order kinetics, indicating that the rate of drug release is concentration dependent. The corresponding plot (log cumulative percent drug release vs log time) for the Korsmeyer-Peppas equation indicated a good linearity (R2= 0.972). The diffusion exponent “n” was between 0.45-0.89, which appears as diffusion mechanism is non-fickian diffusion. Thus, indicates that the drug release was controlled by more than one process (both diffusion and dissolution).13 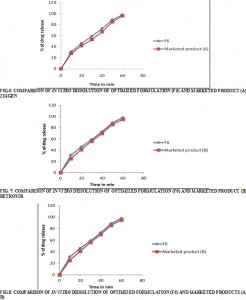 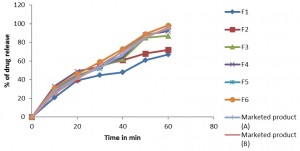 FIG. 9: COMPARISON OF IN VITRO DISSOLUTION OF FORMULATIONS (F1- F6) WITH MARKETED PRODUCTS (A, B) 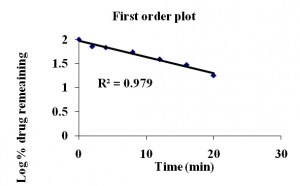 The stability studies were conducted by comparing the initial results with that of the stability samples obtained after one month and three months. Forced degradation studies at 550C & Stability studies at 40±2ºC/75±5%RH (accelerated condition)  for 1& 3 months indicated that no characteristics changes in formulation. There was no chemical interaction between drugs and excipients. Showed in Table 8, 9, 10, and 11. 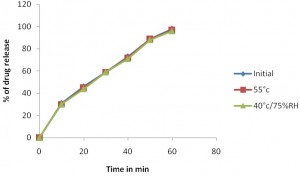 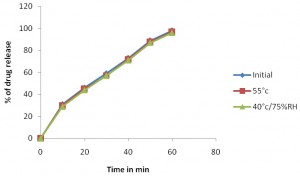 CONCLUSION: Abacavir and zidovudine tablets were successfully formulated using good proportions of ingredients and appropriate method i.e, direct compression method. The stable robust quality of Abacavir and Zidovudine conventional tablets is formulated. The formulated tablets are evaluated for the tests like weight variation, friability, disintegration, hardness, drug content and the optimised formulation complies with the specifications. The disintegrant used in the formulation is sodium starch glycolate which is different from that of the innovator and even the binder differs from the innovator even though the specifications of the evaluation are compiled as per the specifications. The optimised formulation is kept for stability studies and the results are good In Fig. 11, 12.

ACKNOWLEDGMENT: The authors sincerely express thanks to the Management, Department of pharmaceutics of joginpally B R Pharmacy College and Jawaharlal Nehru Technological University, Hyderabad for providing facilities to carry out this research work. Authors are thankful to Rainbow Labs, Hyderabad, India for providing Drug and other Excipients.