INTRODUCTION: Oral controlled release dosage forms have been developed for the past three decades due to their considerable therapeutic advantages and applications. The high level of patient compliance in taking oral dosage forms is due to the ease of administration and handling of these forms 1.

However, the development process is precluded by several physiological difficulties, such as an inability to confine the dosage form within desired region of the gastrointestinal tract, fluctuation in the gastric emptying process etc. This variability may lead to an unpredictable bioavailability of an orally administered dosage form 2. To increase the gastric retention time of drugs, gastroretentive floating dosage forms are developed which can remain in the gastric region for several hours 3. Incorporation of the drug in these dosage forms prolong the retention time within the gastrointestinal tract (GIT) until all the drug is completely released at the desired period of time 4. From the formulation and technological point of view, floating drug delivery system is considerably easy and logical approach in the development of gastroretentive dosage forms 5.

Gastroretentive floating drug delivery technology is one of the promising approach for enhancing the bioavailability and controlled delivery of drugs that exhibit narrow absorption window 6. These drug delivery systems have been shown to possess better efficacy in controlling the release rate for drugs with site specific absorption 7.

Famotidine is a histamine H2 receptor antagonist which is widely prescribed in gastric ulcers, duodenal ulcers, Zollinger-Ellison syndrome and gastroesophageal reflux disease. This drug completely antagonises the parietal cell H2 receptor. It inhibits histamine, gastrin and acetylcholine stimulated acid secretion; pepsin secretion also falls with the reduction in volume of gastric juice. It increases the incidence and rate of healing of peptic ulcers 8, 9.

In the present investigation, HPMC K4M and HPMC K100M were utilized along with gas generating agents such as sodium bicarbonate and citric acid for the formulation of floating tablets of famotidine which would increase the bioavailability, thereby improving the therapeutic efficacy and patient compliance.

Preparation of Floating Tablets: Tablets were prepared by wet granulation method. First of all, the ingredients were weighed and then mixed thoroughly. Granulation was done with a solution of PVP K-30 in sufficient isopropyl alcohol. After drying in conventional hot air oven at 45°C, the dried granules were passed through 18/22 mesh, then lubricated with magnesium stearate (1%w/v) and purified talc (2%w/v). Finally, the blend was compressed on a mini-rotary punching machine with punches of 7 mm 10. The composition of different formulations of floating tablets is shown in table 1.

Evaluation of Tablets: The prepared tablets were evaluated for uniformity of weight using 20 tablets. Hardness, thickness and friability were measured with Pfizer hardness tester, vernier calliper and Roche friabilator respectively. The results were expressed as mean ± Standard deviation 12-14.

Drug Content Uniformity: Twenty tablets were taken and powdered; powder equivalent to one tablet was accurately weighed and was allowed to dissolve in 100 mL of 0.1 N HCl, followed by stirring for 30 minutes. The solution was filtered through 0.45 µm membrane filter, diluted suitably and analysed using UV/Visible spectrophotometer at 265 nm using 0.1 N HCl as blank 12.

Where, w1 = initial weight of tablet; w2 = final weight after swelling of tablet.

The mean ± standard deviation values of swelling index were calculated 16.

In vitro Dissolution Studies: In vitro dissolution studies were carried out using USP dissolution apparatus type II at 50 rpm. The dissolution medium consisted of 900 mL of 0.1 N HCl, maintained at 37 ± 0.5°C. 10 mL of the sample was withdrawn at suitable time intervals and immediately replaced with an equal volume of 0.1 N HCl to maintain the volume constant. The samples were filtered through a 0.45 µm membrane filter, diluted sufficiently and analysed at 265 nm using UV/Visible double-beam spectrophotometer 17.

Kinetic Modelling of Drug Release: The suitability of several equations, which are reported in the literature to identify the mechanism(s) for the release of drug, was tested with respect to the release data 18-21. Data were evaluated according to the following equations mentioned in table 2:

Where F is the fraction of drug release constant, t is the time, n diffusion coefficient

Flowability of granules was found to be good as indicated by compressibility-flowability correlation data. Hausner’s ratio is related to interparticle friction. Hausner’s ratio values for all formulations were found to be near about 1.2 indicating low interparticle friction. Angle of repose was found to be in the range of 24.34°-29.40° with HPMC K4M and 23.70°-25.40° with HPMC K100M. The values of angle of repose were less than 30, indicating good flowability.

Physicochemical Evaluation: Floating tablets of famotidine were prepared by effervescent technique using HPMC (K4M, K100M), sodium bicarbonate, citric acid and PVP K-30. The magnesium stearate and talc were used as lubricant and glidant, respectively. Findings of the physicochemical characterization are shown in table 4. Average weight of floating tablets in all the formulations varied between 198.15 mg to 199.15 mg. Variation was determined less than 7.5% which is found to be within limits as prescribed in USP. Thickness of tablets of all the formulations was observed in between 3.28 mm to 3.38 mm which is found to be satisfactory. The hardness for different formulations was found to be between 5.13 to 5.93 kg/cm2 indicating satisfactory mechanical strength. The friability was below 1% for all formulations, which is an indication of good mechanical resistance of the tablets. Drug content varied in between 97.40% to 98.29% for different formulations, indicating good content uniformity.

In vitro Buoyancy Studies: The combination of SB and CA is required for good floating ability and therefore, this combination was selected for the formulation of floating tablets. Buoyancy of the tablets is governed by both the swelling of hydrocolloid particles on the tablet surface and the presence of internal voids in the dry centre of tablet (porosity). These two factors are essential for the tablet to acquire bulk density less than 1 and so remain buoyant on gastric fluid.

Swelling Indices: HPMC is a hydrophilic polymer. It swells on contact with water. The hydration ability of the formula is significant because it influences: (a) tablet buoyancy, (b) adhesion ability of swellable polymers as HPMC K4M and HPMC K100M, (c) drug release kinetics. The thickness of swollen layer formed around the matrix core was greater in matrices containing HPMC of higher viscosity grade. Thus, swelling index was comparatively less in tablets containing HPMC K4M than that of tablets containing HPMC K100M.

With the increase in citric acid concentration in formulations containing HPMC K4M and HPMC K100M, it was found that swelling of polymer increases due to higher gas pressure caused by faster and higher carbon dioxide generation.

It was evident from the results that as the citric acid concentration was increased in formulations i.e. F3-F5 containing HPMC K4M and F8-F10 of HPMC K100M, swelling index was also increased from 144.60%-165.00% and 220.10%-254.10% respectively. Results of swelling index are shown in table 4. Fig. 1 and 2 depict graphical representations that were plotted with % swelling index versus time (hrs). 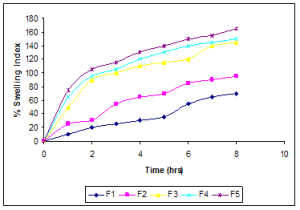 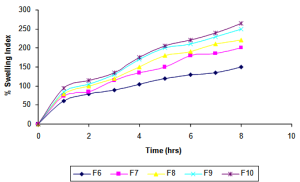 In vitro Dissolution Studies: On increasing the proportion of HPMC in formulations, the release of drug was observed to be decreased. This might be due to increase in resistance of the gel layer to drug dissolution. At a high polymer level, formation of tightly swollen gel layer caused by more intimate contact between the particles of HPMC results in decrease mobility of drug particles in swollen matrices, which leads to decreased release rate. It is evident from in-vitro dissolution data that increase in citric acid concentration increased the release rate but reduced the floating time, probably due to the presence of excess carbon dioxide. Comparing different grades of HPMC, it was found that HPMC K100M provided better release characteristics with floating time of 10 hrs. The cumulative % drug release v/s time plots for different formulations are presented in fig. 3 and 4. 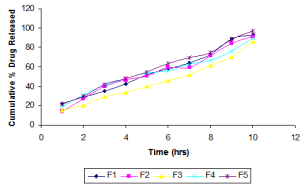 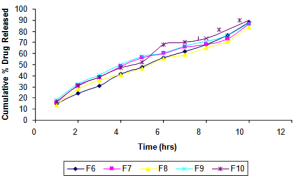 Mathematical Modelling of Drug Release: Data obtained from in vitro dissolution studies were fitted in different models viz. Zero order, First order, Korsemeyer-Peppas and Higuchi model. The data were processed for regression analysis using MS EXCEL statistical function. The release constant was calculated from the slope of the appropriate plots, and the regression coefficient (r2) was determined as shown in table 5.

To confirm the exact mechanism of drug release from these tablets, the data were fitted to Korsemeyer and Peppas model. The ‘n’ value of Korsemeyer- Peppas model for the different formulations was found between 0.615 and 0.764 which lies within the range of 0.5 and 1.0. Therefore, the most probable mechanism that the release pattern of all formulations followed was non-fickian diffusion or anomalous diffusion, where in the drug release mechanism is controlled by both diffusion as well as polymer relaxation process.

CONCLUSION: From the above studies, it has been observed that effervescent based floating drug delivery system is a promising approach to achieve controlled release behaviour and in vitro buoyancy profile. Floating tablets employing famotidine as a model drug can be prepared successfully using wet granulation technique. It was concluded that all formulations had acceptable physical parameters. The addition of gel-forming polymer HPMC (K4M and K100M) and gas-generating agents were essential to achieve in vitro buoyancy.

The type of polymer also affects the drug release rate. Polymer swelling is crucial in determining the drug release rate and is also important for floatation. Based on these findings, it has been revealed that floating type gastroretentive drug delivery system holds significant potential for better drug delivery and facilitates an enormous impact on health care. Moreover, it is anticipated that increased sophistication of this effervescent approach will ensure the successful delivery of therapeutic molecules in a more efficient manner.

ACKNOWLEDGEMENT: The authors would like to express their sincere gratitude to Professor Om Prakash, Dean and Director, Institute of Pharmaceutical Sciences, Kurukshetra University, Kurukshetra-136119, India for providing necessary facilities to carry out this work.