INTRODUCTION: Drugs that might be easily held from the gastrointestinal tract and having a short half-life are cleared out quickly from the systemic circulation. To short these complications, oral controlled drug delivery dosages were preferred. They convey the drug slowed into the GIT and keep up a reliable medicine center in the serum for a more drawn-out time period. Attempt's to improve oral medicine bioavailability have been created about the pharmaceutical business.

As the number and concoction, arranged assortment of prescriptions has extended, new strategies are needed to develop orally dynamic therapeutics. In this way, GRDDS, which improves the prolongation of the drug in the GIT and improve their bioavailability, has been developed 1.

One of the most potent approaches for achieving a prolonged and obvious medicine transport profile in the GI package is to control the GRDFs.

Increased blood pressure is related to a linear increase in the endanger of CV disease. Starting with BP of 115/75 mm Hg, every 20mmHg increase in SBP and/or every 10mmHg increase in DBP doubles the chance of demise due to stroke, coronary heart ailment, or different vascular diseases Disease 2.

Labetalol HCl is a mixed β- blocker. It ties seriously with each alpha and β-receptors. It is somewhat solvent in water and may be very much assimilated from the GI lot. LHCL is quickly assimilated following an oral component but studies wide first-pass metabolism, bringing approximately simply 25% oral bioavailability. The drug is disposed of quickly, so rehashing daily organization is needed to maintain viable plasma levels. The half-existence of LHCL is roughly 4–6 hrs. It has a lower molecular mass (364.9) and positive log P that value is 1.89.

Evaluation of Compatibility of Drug with Polymer by using FTIR Spectroscopy: 5 Drug-polymer compatibilities were examined using FTIR spectroscopy. Spectral values have been recorded for the drug, drug with ethylcellulose, a drug with sodium alginate, a drug with HPMCK4M, and drug with all polymer mixture. 3mg of drug was mixed with 100mg of KBr (dried at 40-50°C). The blend was taken and compressed under 10-ton pressure in a hydraulic press to form a transparent pellet. The same experiment is followed for all remaining excipients used. The sample has been examined at a resolution of 1 cm-1 and scanned between 4000 to 400 cm-1.

Differential Scanning Calorimetry (DSC): 5 DSC thermograms of Labetalol HCl and drug with polymers were examined by using differential scanning calorimetry to estimate possible interaction between drug-polymer. The samples have been placed in a flat-bottomed aluminum pan and maintain the constant heat (10°C/min) under nitrogen purge at a flow rate of 25ml/min. The data collection was conducted at a temperature range of 30-400°C.

Bulk Density / Fluff Density: 7, 8 In this study hollow microspheres were transferred to a measuring cylinder and the volume was recorded.

This volume is bulk volume and it includes true volume of the powder and the void space amongst hollow microspheres.

After noted hallow microspheres initial volume, the tapping was continued on a wooden surface until no further change in volume was calculated using tapped density equipment (Pharma Chem Machineries, model C-BD 100). The following formula was to calculate the tapped density.

Hausner’s Ratio: 11, 12, 13 It is an index of ease for powder flow. It is calculated by the following formula.

Particle Size: 5, 14 The particle size determination of hollow microspheres was resolved with an optical microscopic technique using polarized light and calibrated ocular micrometer was to measure the mean particle size.

Surface Morphology by SEM: 15, 16, 17, 18 SEM of drug incorporated floating hollow microspheres were taken by coating the dried hollow Microspheres with gold (100 A°) under an argon atmosphere in a gold coating and was placed in the SEM chamber.

In-vitro Floating Ability: 21 50mg of floating hollow microspheres have been taken in a 50ml beaker. 20 ml of 0.1N HCl containing 0.02% tween 20 was added to that. The beaker was shaken horizontally in a water bath at 37+/-0.1oC. Floated particles were gathered after 10 h and dried in a desiccator till constant weight.

This procedure was implemented to all of the batches. The percent of floating hollow microspheres was calculated using the following formula.

Entrapment Efficiency: 22 To assess the entrapment efficiency, hollow microspheres (30mg) have been properly triturated and suspended in a minimum amount of alcohol, that solution diluted with 0.1N HCl (pH1.2) and filtered to separate shell fragments, amount of Labetalol HCl was analyzed spectrophotometrically at 303nm.

In order to calculate the percentage yield, the prepared hollow microspheres were collected and weighed. The entrapment efficiency and yield were calculated using the following equations

Determination of % Yield of Hallow Micro-spheres: 22 The percent yield was calculated as the weight of hollow microspheres obtained from each batch divided by total weight of drug and excipient used to prepare that batch multiplied by 100.

Identification and Incompatibility of Drug with Polymers by FTIR: The FTIR study was conducted out for pure drugs, polymers (Ethylcellulose, Sodium alginate, and HPMC K4M) and their physical mixtures. FTIR spectra are shown in Fig. 1.

The results of IR spectral analysis showed the following major peaks for Labetalol HCl, polymers (Ethylcellulose, sodium alginate, and HPMC K4M), and their physical blend which are tabulated in Table 2. The drug-polymer interactions were ruled out as there were no major shifts in absorption peaks of Labetalol HCl in the presence of polymer combinations viz. Ethylcellulose, Sodium alginate, and HPMC K4M. 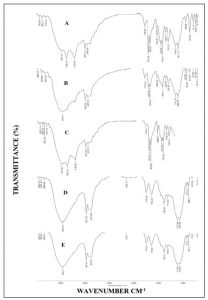 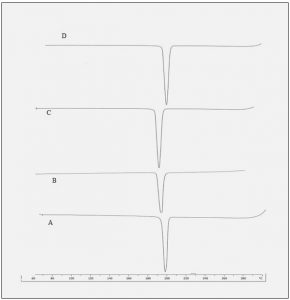 Micromeritic Studies: All the formulated batches of Labetalol HCl Hollow Microspheres shown good flow properties with a value of angle of repose between the range of 31°34'- 38°27'. The bulk density and tapped density of all formulations were within short range i.e. 0.07 ± 2.63 to 0.14 ± 2.01 gm/cm3 and 0.08 ± 1.25 to 0.14 ± 1.52 gm/cm3. Hausner’s ratio was less than 1.10 for all formulations, which indicates better flow characteristics of microspheres and the results were mentioned in Table 3.

Surface Morphology by SEM: The SEM showed that the evolved floating Hallow microspheres were spherical with a porous surface which facilitate diffusion of the drug, as shown in Fig. 3.

Entrapment Efficiency: The drug entrapment efficiency of hollow microspheres was observed to be precise (74.23 ± 2.12 to 80.82 ± 2.23%). This may be due to the insolubility of drugs in water. The results have been shown in Table 4.

Determination of % Yield: The drug percentage yield of all formulations ranges from 72.23 ± 1.62 to 80.82 ± 2.23. As polymer concentration increases, the yield of hollow microspheres was also found to increase. The results were shown in Table 4.

In-vitro Drug Release Kinetics: From the in-vitro dissolution observes of all formulations (F1-F10), formulation F7 releases around 90.12% of drug at the final of 12 hours for a sustained release. Therefore, the F7 formulation was chosen as the best formulation from all ten formulations. The results were shown in Table 5 and Fig. 5.

Drug Release Kinetics: The regression coefficient values and n values show that the drug releases comply with Non - Fickian release (Diffusion and swelling). The results were shown in Table 6.

FIG. 3: SEM OF HALLOW MICROSPHERES: (A) OUTER SURFACE; (B) INTERNAL SURFACE OF A CROSS-SECTION 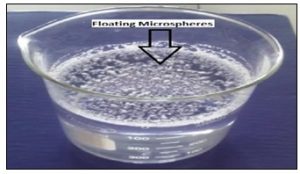 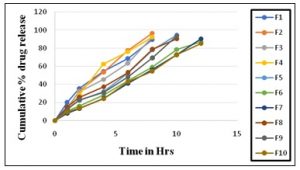 CONCLUSION: The outcomes show that formulation F7 (drug and 1:4 ratio of HPMCK4M: Sodium alginate) of Labetalol HCl hollow microspheres so prepared will continue to be buoyant on the surface of GI fluid, releasing Labetalol HCl in sustained action. Inferences drawn from in-vitro studies suggest it has achieved the objective of considerable influence on physicochemical characteristics.