ABSTRACT: The mouth of human body provides non-shedding surfaces (teeth) for natural microbial colonization. This can result in the accumulation of large masses of bacteria and their products at stagnant sites. Dental plaque, Periodontitis and gingivitis are some of this type of conditions, which can develop due to microbial accumulation on teeth and Infections of    throat leading to tonsillitis, pharyngitis, laryngitis, sour throat etc. Chlorhexidine is widely used antimicrobial drug in the treatment of dental plaque and gingivitis and Flurbiprofen is used as anti-inflammatory drug to reduce pain and inflammation. Lozenges are designed to deliver medications directly to the mucus membranes of the mouth and oropharengial cavity by dissolving slowly when placed between the tongue and gums. Lozenges provide maximum amount of local action thus Chlorhexidine and Flurbiprofen are formulated as lozenges to provide local antiseptic and anti-inflammatory action. The candy based lozenges were prepared by heat and congealing method by sugar as lozenge base, HPC, HPMC as polymers, citric acid artificial flavours and colours and other essential excipients. Some selected formulations were tested for drug excipient interactions subjecting to IR Spectral analysis. Formulated lozenges were evaluated for weight variation, crushing strength, friability, thickness, taste, dissolution time, and %assay. Crushing strength of optimized troches was found between 8-9.50 kg/cm2. The candies can provide an attractive alternative formulation in the alleviation of pain and Inflammation.

They are intended to be dissolved on the back surface of the tongue to provide drug delivery locally to the mouth, tongue, throat, etc., to minimize systemic and maximize local drug activity. These contain a variety of active ingredients including antimicrobials and local anesthetics for throat pain, aromatics, herbals, zinc salts, decongestants, anti-histamines and cough suppressants and nicotine like substances for smoking cessation etc 1, 2.

Preformulation studies are primarily done to investigate the physicochemical properties of drug and to establish its compatibility with other excipients.

Chlorhexidine and Flurbiprofen were mixed in equal proportions and subjected to Physical observation and FTIR studies3.

Chlorhexidine and Flurbiprofen was mixed in equal proportions and kept at 40oC/75%RH conditions for two months. The physical properties (Color change) were monitored regularly. The change in color of mixture was considered as incompatibility and the blend was discarded from study.

Chlorhexidine and Flurbiprofen mixture was mixed in equal proportions with all excipients which were used in the formulation, in different ratios and kept at 40oC/75%RH conditions for two months. The physical properties (Color change) monitored regularly. The change in color of any mixture was considered as incompatibility and the excipient blend was discarded from study.

A Fourier Transform-Infra Red spectrophotometer (Spectrum BX series, 51658, Perkin Elmer BX, UK) equipped with spectrum v2.19 software was used to study the non-thermal analysis of drug-drug and drug-excipient (binary mixture of drug: excipient 1:1 ratio) compatibility (Fig.6 to 12).  The spectrum for each sample was recorded over the 450–4000 cm-1 spectral region

Hard candy Lozenges were made just like hard candies. The hard candy lozenges were prepared as per the formulae shown in Table 2. All the ingredients like sucrose, liquid glucose, color, and polymer except flavors were mixed together along with the medicament and added to molten mass of sugar. Now the mass is mixed thoroughly to get a uniform distribution of medicament. Flavors were added when the temperature was brought to 40-45 °C. Now this semisolid mass was poured into pre-lubricated moulds and subjected to cooling. Then the hard candy lozenges were taken out from the moulds and packed in aluminum foil pouches. The above drugs give bitter taste so in order to mask the bitter taste of drugs we included saccharin (artificial sweetener), Menthol (cooling agent) in the above formulations4.

The prepared lozenges were smooth, round and good in appearance. They are shown in Fig. They were studied for their physicochemical properties like weight variation, hardness, thickness, friability and drug content.

Twenty lozenges were taken and their weight was determined individually and collectively on a digital weighing balance. The average weight of one lozenge was determined from the collective weight. The weight variation test would be a satisfactory method of determining the drug content uniformity. The percent deviation was calculated using the following formula 5, 6. The results are presented in Table 4.

Hardness of lozenge is defined as the force applied across the diameter of the tablet in order to break the lozenge. The resistance of the lozenge to chipping, abrasion or breakage under condition of storage transport and handling before usage depends on its hardness. For each formulation, the hardness of 6 tablets was determined using Pfizer hardness tester and the average was calculated and presented with standard deviation. The results are presented in Table 4.

Lozenges thickness is an important characteristic in reproducing appearance. Twenty Lozenges were taken and their thickness was recorded using Digital Micrometer (Digital Caliper, Aerospace, India). The average thickness for Lozenges is calculated and presented with standard deviation5, 6. The results are presented in Table 4.

It is a measure of mechanical strength of tablets. Roche friabilator (Electro lab, Mumbai, India) was used to determine the friability by following procedure. Pre-weighed lozenges (20 tablets) were placed in the friabilator. The lozenges were rotated at 25 rpm for 4 minutes (100 rotations). At the end of test, the lozenges were re-weighed, loss in the weight of lozenges is the measure of friability and is expressed in percentage 5, 6 (Table 4 ) as:

W2 = Weight of the 20 tablets after testing

Determination of drug content: 20 lozenges were randomly selected, weighed and finely powdered and quantity of powder equivalent to one lozenge was added to 100 ml solvent of pH 6.8 phosphate buffer in a conical flask. Conical flasks were placed on a rotary shaker overnight. An aliquot of solution was centrifuged and supernatant was filtered through a 0.22µ filter. Absorbance of the resulted supernatant solution was measured using U.V Visible spectrophotometer at a wavelength of 255nm and 247nm against pH 6.8 phosphate buffer as blank. Concentrations were calculated with the help of standard graph and total amount present in the formulation was calculated7, 8, 9.

In Vivo Taste Evaluation of Chlorhexidine and Flurbiprofen Lozenges:

Taste evaluation was performed on ten healthy human volunteers by asking them to taste the lozenges for 5 minutes.  After 5 minutes they are supplied with water to rinse the oral cavity. Data of the taste, mouth feel, and appearance of the lozenges were recorded from them10, 11, 12. The results were reported in the Table 10.

Chlorhexidine and Flurbiprofen When mixed with various proportions of excipients showed no color change at the end of two months, hence proving no drug-excipient interactions.

The FT-IR spectra of pure drug chlorhexidine is shown in the Fig. 1. The characteristic peaks of Chlorhexidine are well retained in the spectrum.

The FT-IR spectra of pure drug Flurbiprofen is shown in the Fig. 2. The characteristic peaks of Flurbiprofen are well retained in the spectrum 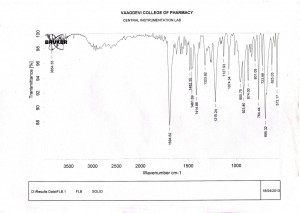 The FT-IR spectra of pure drugs Chlorhexidine and Flurbiprofen is shown in the Fig. 3. The

characteristic peaks of both drugs are well retained in the spectrum.

TABLE 3:  DATA FOR FTIR SPECTRA OF CHLORHEXIDINE AND FLURBIPROFEN

From the table it was observed that the characteristic peaks of Chlorhexidine and Flurbiprofen are well retained in the spectrum representing that there is no significant interaction between drugs and excipients.

Standard stock solutions of Flurbiprofen, Chlorhexidine (100μg/ml) were prepared in distilled water. For the selection of analytical wavelength the solutions of Flurbiprofen and Chlorhexidine (10μg/ml) was prepared separately by appropriate dilution of standard stock solution with distilled water and scanned in the spectrum mode from 200 to 300 nm separately. From the overlay spectra of the drugs, wavelengths 247nm

(λmax of flurbiprofen), 255(λ max of Chlorhexidine) was selected for analysis 1, 4.

(Values are expressed as mean percentage release ± SD with n=3)

Drug Release Kinetics: The mechanism of drug release from lozenges was determined by fitting the in vitro release profiles of optimized batches with zero order, first order, Higuichi and Korsmeyer-Peppas models. The obtained correlation coefficient values are given in the Table 5 and 6.

TABLE 9: GUIDE FOR IN VIVO TASTE EVALUATION OF LOZENGES

The bitter taste of Chlorhexidine and Flurbiprofen was masked with artificial sweetener (saccharin) and flavors. From the taste assessment studies it was concluded that the hard candy lozenges C4, M4, DC formulations containing yellow color and mango flavor containing sweetener concentration 30 mg were  having good taste and odor than other formulations and it also concluded that hard candy lozenge have better mouth feel and taste.

Over all it was concluded that the Chlorhexidine and Flurbiprofen Hard Candy lozenges were found to improve the versatility, convenience, economic and patient compliance leading to an enhanced approach for the administration of drugs  to  treat local oral microbial and inflammatory conditions effectively.