DEVELOPMENT AND IN-VITRO EVALUATION OF FLOATING MICROSPHERES OF 5-FLUOROURACIL

DEVELOPMENT AND IN-VITRO EVALUATION OF FLOATING MICROSPHERES OF 5-FLUOROURACIL

ABSTRACT:Objective of the present study was to prepare and evaluate floating Microspheres using different ratio of ethylcellulose to control the release rate of 5-Fluorouracil (5-Fu) which was taken as a model drug. The microspheres were prepared by the modified emulsion solvent diffusion technique using different ratio of ethanol (ETN) and acetone (ACTN) as solvent system. To study the morphology of microspheres optical and scanning electron microscopy was used. The maximum yield of microspheres was up to 84.85±3.97%. Microspheres showed passable flow properties. On the basis of results of optical microscopy particle size range was found to be ranging from 130.90±12.10 to 175.43±12.32 mm. SEM photographs confirmed their spherical size, perforated smooth surface and a hollow cavity in them. Microspheres exhibited floating properties for more than 10 hours. In vitro drug release studies were performed in 0.1N HCl with 0.1 % SLS. Different drug release kinetics models were applied for selected batches.

INTRODUCTION: Oral ingestion is the most convenient and commonly used method of drug delivery. More than 50% of drug delivery systems available in the market are oral drug delivery systems. These systems have the obvious advantages of ease of administration and patient acceptance. It is difficult to development of oral controlled release drug delivery systems because of unpredictable gastric emptying time (GET) and pH variation in different segment of gastrointestinal tract (GIT). Various attempts have been made to enhance the residence time of the dosage form within the stomach 1.

Gastroretentive system can remain in the gastric region for several hours and hence significantly prolong the gastric residence time of drug in the GIT 2.  The prolongation of gastric residence time (GRT) of delivery system could be achieved by the mechanism of mucoadhesion 3, 4, floatation 5, sedimentation 6, 7, expension 8, 9, modified shape system 10, 11, or by the simultaneous administration of pharmacological agents 12, 13 that delay the gastric emptying.

In the present study, enhancement of GRT is based on the mechanism of floatation. Floating drug delivery systems are less dense than the gastric fluid. Floating single unit dosage form, also called hydro dynamically balanced systems (HBS), have been extensively studied 14. These single unit dosage forms have the disadvantage of a release all-or-nothing emptying process 15. However, the multiple unit particulate dosage forms pass through the GIT to avoid the vagaries of gastric emptying and thus release the drug more uniformly, which results in more reproducible drug absorption and reduce risk of local irritation than the use of single unit dosage form 16.

Ethyl Cellulose was selected for this study since, that has been approved by FDA and is widely used in pharmaceutical industry.

5-Fluorouracil (5-FU) is an antimetabolite of the pyrimidine analog class, which is widely used alone or in combination chemotherapy regimens in a variety of solid cancers, such as stomach, colon, lung, and breast cancer. It interferes with nucleic acid synthesis, inhibits DNA synthesis, and eventually inhibits cell growth. However, 5-FU may cause the following adverse effects: Bone marrow depression, gastrointestinal tract reaction, or even leucopenia and thrombocytopenia.

It is usually given intravenously, as absorption of it from the gastrointestinal tract is erratic and unpredictable. Because of the short plasma half-life of 10–20 min, high doses, e.g. 400–600 mg/m2, have to be administered weekly, to reach a therapeutic drug level. It is poorly absorbed after oral administra-tion with extremely variable bioavailability 17. These disadvantages make this drug as an suitable candidate for proposed delivery system.

Preparation method of Hollow Microspheres: Floating microspheres were prepared by modified non aqueous solvent evaporation method established by Kawashima et al 18. 5-FU and Ethyl Cellulose (18-22 cps) were mixed in a mixture of Acetone and Dichloromethane (Table 1). The resulting suspension was added slowly to stirring 250 ml light liquid paraffin at room temperature from the bottom side. The stirring was done for 2 hours at 1000-1200 rpm by mechanical stirrer equipped with four bladed propellers to evaporate the solvent. After evaporation of solvent, microspheres were collected by filtration, washed repeatedly with petroleum ether until free from oil. The collected microspheres were dried at room temperature and stored in a desiccator over fused calcium chloride.

Micromeritic study: The prepared microspheres were characterized by their micromeritic properties such as particle size, true density, tapped density, % Compressibility index and flow properties like angle of repose (q).

The size of microspheres was determined by using an optical microscope (Magnus MLX-DX, Olympus, India) fitted with an ocular micrometer and stage micrometer. The mean particle size was calculated by measuring 200-300 particles.

The tapping method was used to calculate tapped densities and % compressibility index, as follow (equation 1 and 2)-

Here, V and Vo are the volumes of the samples after before the standard tapping, respectively.

True Densities of hollow microspheres were determined by immersing the microparticles in 0.02% tween 80 solution for three days in a metal mesh basket. The microparticles that were sunk after that process were used for density measurement as carried out by the displacement method 19.

The angle of repose, (q) of the microspheres, which measures the resistance to particle flow, was determined by fixed funnel method 20 and calculated as follow (equation 3)-

Where, h= height of pile,  r = radius of the base of pile on the graph paper.

Morphology: Optical and scanning electron microscopy (SEM) was done to study morphology of microspheres. Microspheres were taken from the solution during their developing phase and spread over a glass slide. The prepared slide was studied under optical microscope at 100 X magnification.

The samples for SEM were prepared by sprinkling the powder on a both side adhesive tape stuck to a stub. Gold palladium coating on the prepared stub was carried out by using Sputter coater (POLARON model SC- 76430). The thickness of coating was about 200Å. The coated stubs were randomly scanned under Electron microscope (LEO-430, UK).

Incorporation Efficiency: To determine the

Incorporation efficiency 50 mg microspheres were taken and dissolved in 25 ml of 0.1 N HCl. Thus the solution was filtered to separate shell fragments. The estimation of drug was carried out by using a U-V double-beam spectrophotometer (Shimadzu UV-1700 series) at the lmax of 266 nm and the incorporation efficiency was calculated as follow (equation5)

In-vitro Floating Ability: 50 mg of floating microspheres were placed in 50 ml beakers. 20 ml of 0.1 N HCl containing 0.02% Tween 20 was added to that. The beakers were shaken horizontally in a water bath at 37±0.1°C. Floated particles were collected after 10 hours and dried in a desiccator till constant weight. The percentage of floating microspheres was calculated as (equation 6)-

All the experiments as specified above were conducted in triplicate.

Statistical Analysis: In this study, the results are given as mean ± SD. Student’s t-test and one-way analysis of variance (ANOVA) were applied to find out the significant difference in drug release from different batches by using GraphPad-Instat Software Programm (GraphPad-Instat Software Inc., San Diego). Considered statistically significant difference was at p<0.05.

Kinetics of Drug Release: The zero-order rate 23 (Equation 7) describes systems where drug release is independent of its concentration and this is applicable to the dosage forms like transdermal system, coated forms, osmotic system as well as matrix tablets with low soluble drugs. The first-order equation 24 (Equation 8) describes systems in which the release is dependent on its concentration (generally seen for water-soluble drugs in porous matrix). The Higuchi model 25 describes the release of the drug from an insoluble matrix to be linearly related to the square root of time and is based on Fickian diffusion (Equation 9).

The Hixson-Crowell cube root law 26 (Equation 10) describes the release of drug from systems where it depends on the change in surface area and diameter of the particles or tablets with time and mainly applies in the case of systems that dissolute or erode over time. In order to authenticate the release model, dissolution data can further be analyzed by Peppas and Korsmeyer equation 27 (Equation 11).

RESULT AND DISCUSSION: The formulations of 5-flurouracil loaded microspheres were prepared by using different amount of Ethyl Cellulose and solvent (Acetone and Dichloromethane) by modified non aqueous solvent evaporation technique. Introduction of drug suspension from bottom side avoids the formation of aggregates at the top of liquid paraffin hence, improved the yield of microspheres (table 1). The formulation mechanism of polymer hollow microspheres is reported in the literature 28, 29. According to this mechanism, the polymer and drug was dissolved in solvent mixture such as dichloromethane: acetone (1:1 v/v). Thus, the polymer solution was emulsified in non aqueous medium of light liquid paraffin. Then, the dichloromethane diffused out of the embryonic microspheres into non aqueous phase. On the other hand, acetone, which could not be diffused, retained in the microspheres as core material. On keeping these microspheres at 40°C, the vapors of acetone were generated which escaped them, leaving the microspheres as a hollow spheres.

Morphology: Photographs from optical as well as scanning electron microscopy confirmed that prepared microspheres were spherical in shape. (Fig. 1)

SEM confirmed that microspheres were hollow with smooth perforated surface. The perforation may be due to evaporation of ethanol form embryonic microspheres. 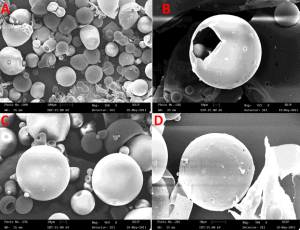 Drug Entrapment Efficiency: The maximum and minimum drug entrapment efficiency of microspheres was found to be 57.28±3.75 to 74.53±4.58 % respectively (Table 3).

In-vitro Floating Ability: All microspheres showed good floating ability (64.87±2.65 to 81.80±3.07 %) for more than 18 hours (Fig. 2). Such floating performance was due to insolubility of Ethyl Cellulose in the gastric fluid. It was observed that the floating ability increased with increasing average particle size. It was also observed that the formulation prepared with higher volume of Ethanol (Batch D-11) showed better floating ability than other batches. The region behind this may be larger air core formation in the batch D-11, which made them lesser dense than that of gastric fluid (Table 3). 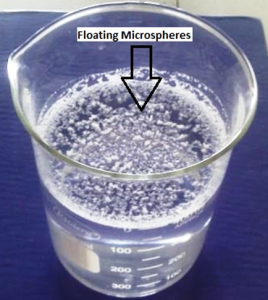 FIG. 2: PHOTOGRAPH SHOWING THE FLOATING MICROSPHERES ON THE SURFACE OF 0.1 N HCl (pH 1.2)

In vitro Drug Release: The release of 5-flurouracil floating microspheres was studied in 0.1N HCl with 0.1% SLS (1.2pH). On increasing the amount of polymers there was a significant decrease (p<0.05) in the cumulative drug release (Fig. 3).

Significant increase was observed in cumulative drug release on increasing the volume of ethanol in solvent mixture (Fig. 4).

The microspheres prepared on higher RPM showed increased drug release, it may be because of increasing surface area of microspheres (Fig. 5).

CONCLUSION: Novel floating microspheres were successfully prepared by emulsion solvent diffusion method for prolonged as well as controlled action of 5-flurouracil. Due to their low densities, this multi particulate drug delivery system showed good floating ability (more than 18 hrs). From in vitro drug release studies, it is concluded that by changing the ratio of polymers and solvents, 5-fluorouracil release can be controlled. These microballooms could be dispensed by filling them in the empty capsule shell.

ACKNOWLEDGEMENT: We are thankful to Intas Pharmaceutical Ltd., Gujarat for providing gift sample of 5-flurouracil and Mr. Parag Agarwal, New Era Scientific, Meerut for providing required chemicals and polymers within time. We also wish to thank to Director, Birbal Sahni Institute of Palaeobotany, Lucknow, India, for providing us SEM facility.