INTRODUCTION: Drugs under biopharmaceutical classification system (BCS) class II exhibit low solubility and high permeability characteristics 1. The solubility in gastro intestinal fluids and the dissolution rate are the limiting factors in most of the BCS class II drugs 2. Thus research for strategies of drug dissolution enhancement is of special interest which leads to improvement of bioavailability. Particle size reduction of a drug is a promising way to improve the bioavailability of poorly water soluble substances due to increased dissolution rate of micron or nano size substances 3, 4. There are numerous examples of research work on this aspect of enhancing bioavailability of poorly water soluble drugs 5, 6, 7. Several methods are followed to produce a drug of small particle size. The most common way is the size reduction of larger particles using different milling processes such as jet-milling, pearl-ball milling or high pressure homogenization 2.

Carcedilol, chemically (2 RS) - 1- (9H-Carbazol- 4yloxy)- 3- [[2- (2- methoxy phenoxy) ethyl] amino] propan- 2- ol is a non selective β and α1 adrenergic receptor blocking agent 8, 9, 10. It also has multiple spectrums of activities such as antioxidant property, inhibition of smooth muscle proliferation and calcium antagonistic blocking activity 10, 11, 12. Carvedilol is widely used as immediate-release (IR) tablet formulation to treat essential hypertension and mild to severe congestive heart failure 13. Carvedilol free base is practically insoluble in water and thus poorly absorbed from gastro intestinal tract. It exhibits poor absolute bioavailability of 25-35% 14. Half life of carvedilol is 6-8 hrs 15. Recently a phosphate salt of carvedilol is developed with improved aqueous solubility and chemical stability by protonation of the secondary amine as a salt 16. A new controlled release capsule of carvedilol phosphate was recently marketed with dose strength of 10, 20, 40 and 80 mg free base of carvedilol administered once daily 13. The goal to design controlled release drug delivery systems (CRDDS) was to deliver drug at a rate necessary to achieve and maintain a constant drug-blood level. The key advantages to the use of CRDDS are prolonged activity, fewer doses, fewer side effects and reduced toxicity.

To the best of our knowledge there is no published literature till the date describing controlled release or sustained release (SR) tablet formulation containing micronized carvedilol phosphate. In the present investigation we have approached to develop a SR matrix tablet formulation containing carvedilol phosphate with the reduced drug particle size. Micronization of the drug has been done by jet milling to improve the dissolution rate and the matrix tablet was formulated with hydroxyl propyl β cyclodextrin (HP β CD), as a bioavailability enhancing agent and polyethylene oxide (PEO) as release retarding polymer. Cyclodextrin increases the permeability of poorly soluble hydrophobic drug available at the surface of the biological barrier such as skin, mucosa from where it partitions into the membrane 17, 18. HP β CD is widely used in SR formulation of poorly water soluble drug to improve aqueous solubility and dissolution rate 19. Uses of PEO, a hydrophilic polymer in the design of SR matrix tablet are reported by several researchers 20, 21, 22.

In this paper, formulation of a SR matrix tablet containing micronized carvedilol phosphate employing direct compression technique has been reported. Our aim was to enhance the dissolution rate by particle size reduction which has been evaluated by in-vitro drug release study.

Preparation of Matrix Tablet: The particles passed through the 38µ sieve were used to prepare SR matrix tablet of micronized carvedilol phosphate (MC). After severe trial and evaluation process the suitable composition (Table 1) was fixed and the preparation was done by direct compression technique. All the ingredients except glidant and lubricant were weighed accurately and blended well in laboratory scale planetory mixer for 10 min. The appropriate quantity of mixture was then compressed by 6.4 mm flat punch using an eight station rotary compression machine (Labpress) after addition of talc and magnesium stearate.

TABLE 1: COMPOSITION OF ALL BATCHES OF MICRONIZED CARVEDILOL MATRIX FORMULATION

Physicochemical evaluation of fabricated matrix tablet:  Hardness, friability, diameter and thickness, weight variation and content uniformity are to be measured to evaluate physicochemical property of tablets 23. Tablet hardness were measured by Monsanto hardness tester and expressed by kg/sq.cm. Roche friabilator was used to determine friability of the fabricated matrix tablets taking 20 tablets. Thickness was measured by digital slide calipers (Mitutoyo, Japan). The weight variation of prepared matrix tablets were determined by taking 20 tablets as per the USP guidelines 24. Content uniformity of carvedilol SR matrix tablets was studied as per the assay method described in the USP 32-NF 27, First supplement.

In vitro Release Studies: The in vitro release studies of carvedilol from the prepared matrix tablet were conducted by USP type II apparatus with paddle speed of 100 rpm at a constant temperature of 37 ± 0.5 ˚C. The dissolution studies were carried out for 24 hrs duration. The medium of dissolution (900ml) were 0.1 (N) hydrochloric acid for initial 2 hrs and phosphate buffer (pH 6.8) for 3 to 24 hrs. The drug release from the matrix tablets were determined by a double beam UV spectrophotometer at a wavelength of 242 nm. There was no interference of the ingredients of prepared tablet at the said wavelength. Six replicates of each tablet were taken for the in vitro dissolution study and the cumulative percentage release was plotted vs. time in hr.

RESULT AND DISCUSSION: Sustained release matrix tablets each containing micronized carvedilol phosphate equivalent to 40 mg free base were prepared by direct compression method. Direct compression method is known to be more economical than wet granulation and also avoids heat and moisture which may affect the drug stability 25. Results of different physiochemical property evaluation are described in the Table 2. Hardness of the tablets was within the range of 3.7 to 3.9 kg/sq.cm. All formulations were compliant with official compatibility, which allow not more than 1% of mass lost on 20 tablets weight. Weight variation and thickness, studied with all batches of tablet were within the satisfactory limit. The content of the drug in the tablets were within the acceptable range of 90 to 110 %.

TABLE 2: PHYSICOCHEMICAL PROPERTIES OF ALL BATCHES OF TABLET

n = Number of tablet taken for each test 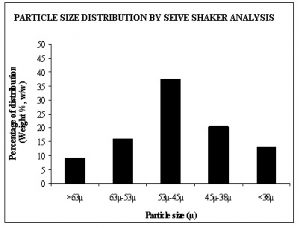 Carvedilol phosphate exhibits better water solubility than it’s free base carvedilol but it still shows low solubility in aqueous medium. HP-β-CD, because of its dissolution enhancing effect was found to be effective in development of SR formulation of poorly water soluble drug 26. PEO is a common choice of the researcher to develop SR matrix formulation because of its low toxicity and pH dependent swelling and drug release properties 27. From the in vitro release study (Figure 2) it was revealed that the carvedilol 40 mg SR matrix tablet of F5 batch composed of the ingredients containing HP-β-CD and PEO exhibit a release rate more than 25% and 99% in 1st hr and 24 hrs respectively.

This implies that the developed tablet have shown a prolonged drug release over a period of 24 hrs. With increasing amount of HP-β-CD and PEO it was observed that release rate of carvedilol was decreasing (in case of F8 and F9). Formulations with low quantity of HP-β-CD (F1 and F2) have shown more than 93% of drug release within 24 hrs which isn’t desirable for a sustained release product for 24 hrs. PEO in association with HP-β-CD delayed the release of drug by controlling the extent and rate of swelling of the polymers. The in vitro drug release profiles of F5 batch tablets are most suitable for a once daily micronized SR carvedilol tablet. 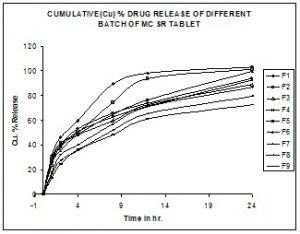 The dissolution rate dC/dt, is a function of the concentration of drug in the media (C), the diffusion coefficient (D), the saturation concentration of drug in the diffusion layer(h) and the surface area of the drug (S). Changes in any one of these terms in the equation can influence dissolution. Micronization leads to a decrease in particle size and thus increase the surface area term. This theory may be behind the enhanced in vitro release from SR tablet of micronized carvedilol phosphate over the non micronized formulation. 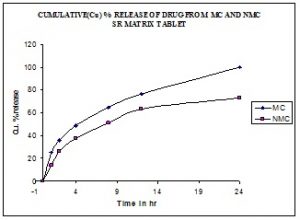