ABSTRACT: The purpose of study was to develop and characterize once daily extended release matrix tablets of Carbamazepine (CBZ), an antiepileptic drug. Tablets were prepared by wet granulation method. Methocel K15M CR and Methocel K100LV CR polymers were used as rate retarding agents in fourteen formulations.  The granules were evaluated for angle of repose, loose bulk density, tapped bulk density, compressibility index, total porosity, drug content etc. and showed satisfactory results. The tablets were subjected to thickness, weight variation test, drug content, hardness, friability and in vitro release studies. All the tablet formulations showed acceptable pharmacotechnical properties and complied with pharmacopoeial specifications for tested parameters. The in vitro dissolution study was carried out for 24 hour in distilled water as the dissolution medium. The release mechanisms were explored and explained by Zero order, Higuchi, First order, Korsmeyer-Peppas and Hixson-Crowell equations. Primarily nine formulations were prepared by using three variable ratios of the two polymers, with 1% sodium lauryl sulphate. The optimized formulations F-5, F-6 and F-9 were further studied to know the effect of solubilizer on release by using various concentration of sodium lauryl sulphate and glyceryl mono stearate. Kinetic modeling of in vitro dissolution profiles revealed the drug release mechanism followed anomalous type or non-Fickian transport and super case II transport. The release of drug was extended for 24 hour by polymer combinations which indicated the usefulness of the formulations for once daily dosage form. Besides, these studies explored both of the optimum concentration, effect of polymers and the use of sodium lauryl sulphate on CBZ release pattern from the tablet matrix for 24 hour period.

INTRODUCTION: CBZ is an antiepileptic drug and also used to treat trigeminal neuralgia. CBZ blocks sodium channel at therapeutic concentrations and inhibits high- frequency repetitive firing in neuron in culture. It also acts presynaptically to decrease synaptic transmission. These effects probably account for the anticonvulsant action of CBZ. The successful formulation to control drug for the required duration of time with optimum release mode depends on various factors, such as the physicochemical properties of the drug, the nature of drug-carrier matrix, the type of the dosage form and the route of administration 1. To reduce the frequency of administration and to improve patient compliance, a once-daily extended-release formulation of CBZ is desirable 2-6.

For sustained release systems, the oral route of drug administration has, by far, received the most attention as it is natural, uncomplicated, convenient and safer route.7 A number of methods and techniques have been used in the manufacturing of oral extended-release dosage forms. Probably the simplest and least expensive way to control the release of an active agent is to disperse it in an inert polymeric matrix. The majority of oral drug delivery systems are matrix-based.

In such systems, the tablet is in the form of a compressed compact that contains an active ingredient, a lubricant, an excipient and a filler or binder. Erosion, diffusion and swelling of the matrix are the various methods through which the systems control drug delivery. The polymer properties invariably play an important role in the release pattern of the drug. If the polymer is predominantly hydrophilic, the swelling process chiefly controls the drug release. The swellable matrices are monolithic systems prepared by compressing a powdered mixture of a hydrophilic polymer and drug.

There are number of techniques applied in the formulation and manufacturing of extended release dosage form. However, the matrix tablet by wet granulation has attracted much attention due to its technological simplicity in comparison with other controlled release systems. Wet granulation method has been applied for preparation of tablet matrix that high dose drugs that experience poor flow and/or poor compactibility can be granulated to obtain suitable flow and cohesion for compaction 9. The release of drug from the tablet matrix depends on the nature of polymer.

Methocel K15M CR and Methocel K100LV CR, used in this study is hydrophilic polymer that become hydrated, swollen and facilitates to diffuse the drug. 10

Preparation of matrix tablets: Tablets were prepared by wet granulation technique. In formulation F-1 to F-9 (Table 1), active ingredient CBZ and release retardant Methocel K15M CR were blended together in a polybag for 10 minutes. Then, the blend was sieved through 0.425 mm mesh (SHIVA, India) and taken in a stainless still bowl. SLS was dissolved into 50 ml water. SLS solution was added with blend and mixed well to form granules. In the formulation F-10 to F-13 GMS was added with active ingredient and granules were prepared by same way.

Exception is the addition of purified water as granulating fluid instead of SLS solution. In the formulation F-14, active ingredient, release retardants Methocel K15M CR and GMS were blended together and form the granules by adding SLS solution. The granules were dried into a tray drier (Classic Scientific, India) at 60oC. LOD of the granules were maintained within 0.80% to 1.20%.  Finally the dried granules were sieved through 0.85 mm mesh then blended again with release retardant Methocel K100LVCR in a polybag for 5 minutes. The mix was blended (Laboratory designed small drum blender, China) finally with colloidal silicon dioxide (aerosol 200) and magnesium stearate (by passing through 0.425 mm mesh) for 1 minute and made into tablets by compression at a fixed compression force.

Tablets of 200 mg mass were compacted using a Clit Tablet Press (USA) with 8.9-mm flat circular punch and die sets. The compaction force was varied to obtain the desired hardness.

LBD = Weight of the powder / volume of the packing

TBD = Weight of the powder / Tapping volume of the packing

The formulated matrix tablets met the pharmacopoeial requirement of uniformity of weight. All the tablets conformed to the requirement of drug content, as per USP. Hardness, % friability; diameter and thickness, tensile strength were well within acceptable limits (Table 3). All formulations showed less than 1% (w/w) friability that indicates the ability of tablets to withstand shocks which may be encountered during transport. The manufactured tablets showed low weight variations and a high degree of drug content uniformity was found among different batches of the tablets, and drug content was more than 98%.

TABLE 2: PROPERTIES OF GRANULES OF CBZ AND EXCIPIENTS 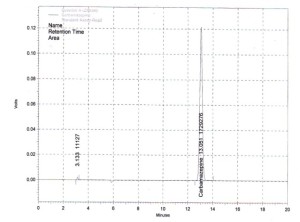 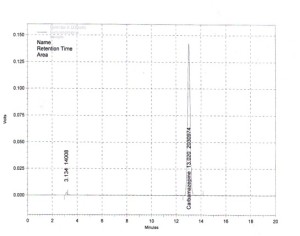 In vitro dissolution studies indicated a steady state sustained release pattern throughout 24 hour of the study which was comparable to theoretical release profile. Drug release kinetics indicated that the drug release was best explained by Higuchi’s equation and First order equation as these plots showed the highest linearity.

To determine the effect of solubilizer on the release of Carbamazepine matrix tablets, these three formulations were further studied by using equal percentage of glyceryl mono stearate another solubilizing agent instead of sodium lauryl sulphate . 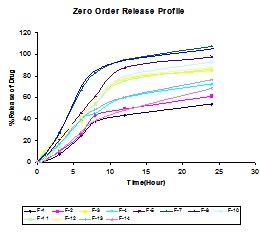 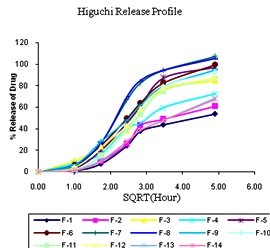 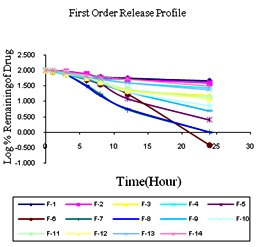 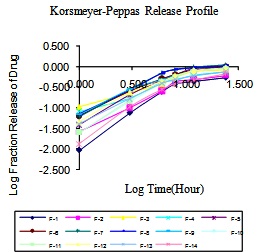 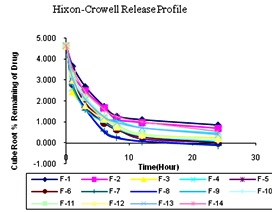 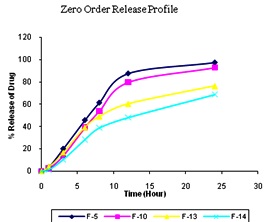 CONCLUSION: From these above discussion it was clear that the equal ratio of two polymers (10%: 10%) had good interaction with CBZ, that’s why gave better release and sodium lauryl sulphate had better solubilizing property on Carbamazepine matrix tablet in compared to glyceryl mono stearate. Another finding was that blending of solubilizer (SLS and GMS) and without solubilizer or surfactant CBZ did not show desire or optimum release profile after 24 hour.

Kinetic modeling of in vitro dissolution profiles revealed the drug release mechanism followed anomalous type or non-Fickian transport and super case II transport which was dependent on the type and amount of polymer used. The drug release followed mainly super case II transport (n>0.85) (F-5, F-6, F-10), anomalous or non-Fickian transport (n>0.43 and n<0.85) in formulation F-9. The release of drug was extended for 24 hour by polymer combinations which indicated the usefulness of the formulations for once daily dosage forms. The optimized formulations may be used for the development of CBZ extended release tablet for commercial production in order to combat epilepsy and treatment of partial and tonic-clonic seizures.