DEVELOPMENT AND IN VITRO EVALUATION OF SELF EMULSIFYING FORMULATION FOR EMBELIN

DEVELOPMENT AND IN VITRO EVALUATION OF SELF EMULSIFYING FORMULATION FOR EMBELIN

ABSTRACT: The purpose of present work was to improve the oral bioavailability of embelin by formulating this hydrophobic phytoconstituent as self emulsifying drug delivery system (SEDDS). SEDDS improves the oral bioavailability by overcoming the dissolution step, enzymatic degradation and hepatic first pass metabolism of phytoconstituent. On the basis of solubility study of embelin, ethyl oleate, tween 80 and span 20 were selected as oil, surfactant and co surfactant respectively for the formulation. Phase diagram study revealed the ratio of surfactant and co surfactant (Smix) for effective self emulsification. Prepared batches of formulation were evaluated for various physicochemical parameters which includes thermodynamic stability study,  emulsification time, morphology study of droplets, determination of zeta potential, viscosity determination, percentage drug content, long term stability study. Pharmacokinetic study of plain drug, marketed tablet and SEDDS of embelin was also done which includes in vitro drug release study which revealed that the pattern of drug release is almost uniform and constant moreover embelin SEDDS have highest percentage cumulative drug release (93%) as compared to the conventional dosage form tablet (47%) and plain drug (34%).

INTRODUCTION: Herbal medicines are more significant than the synthetic medicines but their phytoconstituent have poor aqueous solubility or they have lipophilic nature which in turn leads to their low oral absorption. Embelin is a naturally occurring alkyl substituted hydroxyl benzoquinone. Pharmacological and clinical studies has indicated that embelin exhibits a wide array of therapeutic activities, such as antibacterial, antidiabetic, anxiolytic, anticancer, analgesic, antidepressant, chemoprotective, hepatoprotective and antifertility action but it is hydrophobic in nature and exhibits poor aqueous solubility thus is less bioavailable therefore it was aimed to develop a self emulsifying formulation which could improve its bioavailability 1, 2, 3.

Self emulsifying drug delivery system (SEDDS) is a novel lipid based formulation which provides an advanced approach to overcome the constraints of poor aqueous solubility of certain phytoconstituents 4. SEDDS is an isotropic mixture of drug, oil, surfactant and co-surfactant/co-solvent which on oral administration, spontaneously forms o/w emulsion by the peristaltic movements of gastro intestinal tract, followed by dilution with aqueous medium inside the stomach.

These small droplets of emulsion provide large surface area and have less surface tension which results in better dissolution and release of drug and hence improves the solubility of poorly aqueous soluble herbal drugs 5. Prevention of first pass metabolism of drug in these formulations also contributes towards the improved bioavailability of drug 6.

Quantitative Solubility Study of Embelin: Screening of excipients for a simple and stable self emulsifying formulation is a quite challenging task. Stable formulation depends upon the fair solubility of a drug in the excipients 7. Solubility of the embelin in various oils, surfactants and co solvent/co-surfactants was determined by dissolving an excess amount of the embelin in small quantity (2 ml) of the selected oils, surfactants and co-surfactants and mixed using a vortex mixer for about 20 min. These mixtures were allowed to equilibrate at 25 ºC in a bath sonicator for 72 h then these equilibrated samples were centrifuged at 3000 rpm for 15 minutes. The supernatant was diluted with methanol and filtered through 0.45μm membrane filter. After this the concentration of the embelin was determined by double beam UV-Visible Spectrophotometer at 291 nm 8.

Pseudoternary Phase Diagram Study: The Pseudoternary phase diagrams were constructed at ambient temperature by water titration method using selected excipients. The ternary mixtures with varying concentration of excipients were prepared and the effect of relative concentration of these excipients on self emulsification region in the phase diagram was studied. Four phase diagrams of four different ratios of surfactant and co surfactant (Smix) (1:1, 1:2, 2:1 and 3:2) were constructed. For each phase diagram oil and Smix are mixed thoroughly to delineate the boundaries of phase in a ratio of 1:9 to 9:1. Slow titration to each weight ratio of oil, surfactant and co surfactant with water was carried out. The formation of the emulsion was visually observed as transparent and easily flowable o/w emulsion and marked on the phase diagram. Transparent and single phase mixtures having low viscosity were considered as nanoemulsions.  Phase diagrams were constructed using chemmix school software 9.

Preparation of SEDDS for Embelin: From the four phase diagrams the Smix having largest self emulsifying area was selected. Nine batches having oil to Smix ratio 1:9 to 9:1 has been prepared. Initially blank formulations were prepared by dissolving the selected ratio of oil, surfactant and co-surfactant in proper ratio using vortex mixer at room temperature. Embelin was added to this mixture with constant stirring until a transparent preparation was obtained. The isotropic mixture was kept in glass vial and stored at 25 ºC 10, 11.

Observation for Phase Separation: Prepared SEDDS (containing Embelin) was observed for phase separation by diluting it with 250 ml distilled water at 37 oC temperature. After this the diluted formulation was vortexed for 5 min and then stored for 24 hrs. After storage formulations were observed visually for any precipitation and phase separation 12.

Determination of Emulsification Time: Effectiveness of self-emulsifying formulation was assessed by using a standard USP XXII dissolution apparatus type II. 1ml of each formulation was added to 500 ml of aqueous media at 37 ± 0.5 °C at 50 rpm. In vitro performances of the formulations are visually assessed by standard grading method. According to the efficiency of emulsification A, B, C,D and E grades will be assigned to the batches 13.

Thermodynamic Stability Study: In order to evaluate the stability of embelin SEDDS, the formulation was subjected to heating and cooling cycle by storing at 4 °C and 45 °C (six cycles) for at least 48 hrs. Those batches which are stable at these temperatures were subjected to centrifugation at 3500 rpm for 30 min. Formulations without any phase separation were taken for freeze thaw stress test in which the formulations were stored at -21 °C and 25 °C (three cycles) for not less than 48 hrs 14 .

Determination of Droplet Size and PDI: Droplet size and PDI is determined using the Malvern zetasizer instrument. Sample was prepared by dispersing a small amount (0.1 ml) of formulation in 50 ml of distilled water and sonicated for 15 minutes. Each sample was taken in cuvettes and filled up to 30 % of its capacity and droplet size and PDI were determined 13, 15.

Determination of Zeta potential: Zeta potential is the potential between the tightly bound surface liquid layer (shear plane) of the particle and the bulk phase of the solution. The measurement of the zeta potential tells about the stability. In SNEDDS the charge on an oil droplet is negative due to the presence of free fatty acids. The more negative zeta potential, greater the net charge of droplets and formulation will be more stable.

Zeta potential is determined using the zeta sizer. The sample was prepared by dispersing a small amount (0.1 ml) of formulation in 50 ml of distilled water and sonicated for 15 minutes. Each sample is taken in cuvettes one by one and filled upto 30 % of its capacity and Zeta potential was determined 13, 15.

Viscosity of SEDDS: Viscosity of formulations was determined by Brookfield viscometer. All the readings were taken in triplicate for better accuracy 13, 15.

Morphological characterization: Morphology of the self emulsifying formulation droplets was characterized using transmission electron microscopy. Prior to the analysis, the prepared SEDDS samples were diluted with distilled water to form an emulsion. A drop of the diluted emulsion was placed on a film coated 400-mesh copper grids for 30 min and excess fluid was removed with the help of filter paper. The samples were later stained with 2% (w/v) phosphotungstic acid for 30 seconds and then dried for 20 min before observation 16.

In vitro Drug Release Studies: In vitro release of embelin from optimized SEDDS formulation and marketed formulation (Table 1) was determined using USP dissolution apparatus (Type II). Phosphate buffer pH 7.4 (500 ml) was used as dissolution media. Prepared formulation of embelin was kept in the pouches prepared using dialysis membrane (width 32.34 mm, Avg. diameter 21.5 mm and the capacity of 3.63 ml/cm) which was soaked overnight in phosphate buffer (pH 7.4) at temperature 37 ± 0.5 ºC. Apparatus was set up at 100 rpm paddle speed and aliquots of dissolution fluid “10ml” were withdrawn at specified interval of time. Fresh buffer solution was added to the beaker at the same rate, in order to keep the volume constant. Dissolution fluid was assayed to estimate the concentration of released embelin by double beam UV-VIS spectrophotometer at λmax 291nm. This test was performed in triplicate and the average drug release for each formulation was calculated 17.

Long Term Stability Study (03 months): In order to evaluate the long term stability of the optimized SNEDDS the formulation of embelin was filled into sealed glass vials and then these vials were stored at 4 ˚C for 3 months. After 3 months formulations were evaluated for the clarity, phase separation, percentage drug content and particle size were determined as per the method prescribed earlier 18. 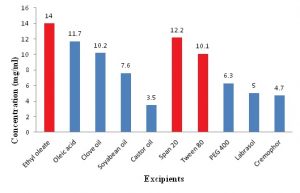 Preparation of SEDDS of Embelin: From the phase diagrams (shown in Fig. 2) it was concluded that the Smix ratio 1:1 has largest self emulsifying area. Therefore this ratio has been selected for formulation preparation. Nine batches having oil to Smix (surfactant: co surfactant 1:1) ratio 1:9 to 9:1 has been prepared.

Observation for Phase Separation:  None of the nine formulated batches has shown phase separation so all batches was further evaluated for self emulsification efficiency test. 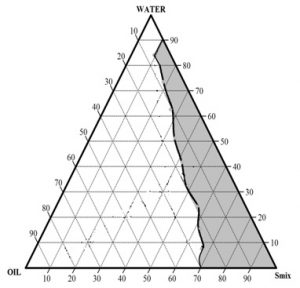 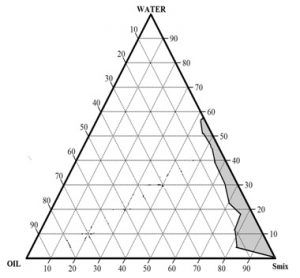 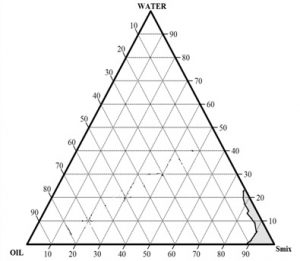 Thermodynamic Stability Study: Batch A, C and G has shown cracking, creaming and phase separation hence theses three batches were drop out and not considered for further study as shown in Table 3.

Percentage Transmittance Test: Calculated value of transmittance ranged from 98.43% to 99.79% as shown in Table 4.

Viscosity of SEDDS: Data of viscosity of four batches are shown in the following Table 4 shows viscosity of all batches through bar diagram. These data shows that all the four batches have viscosity in the desired range hence provides ease in capsule filling. 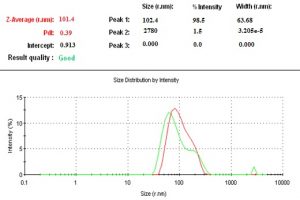 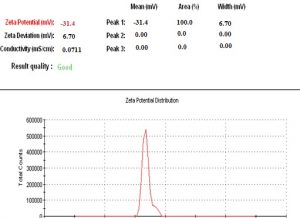 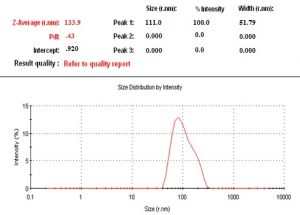 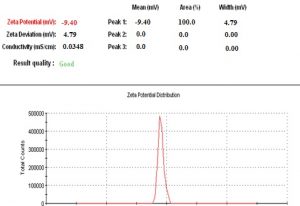 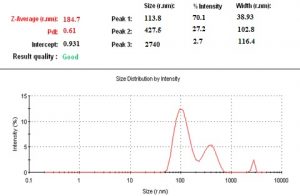 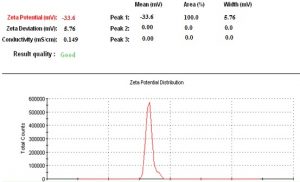 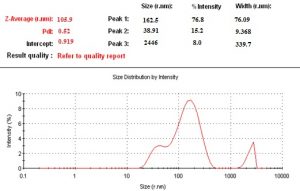 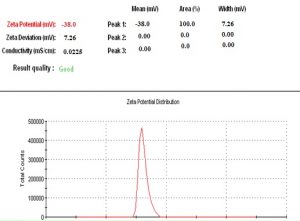 Morphological Characterization:  The TEM analysis was carried out and report of this analysis is shown in Fig. 4. The analysis reports in figure reveal that all droplets are of spherical shape with uniform size and diameter and also all droplets are uniformly distributed. 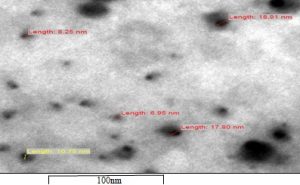 Long Term Stability Study (03 months): Stability study for the 03 months of the formulation was done. After 03 months storage none of the batches showed significant change in clarity, drug content and droplet size. The results shown in table indicate all the batches are stable.

CONCLUSION: Present study has clearly demonstrated the potential utility of SEDDS for formulating embelin with improved aqueous dispersibility and stability by taking ethyl oleate as oil phase and Tween 80 as surfactant and span 20 as co surfactant. Drug release from the optimized SEDDS formulation of embelin was significantly higher (93%) than the marketed formulation i.e. tablet (47%) and plain drug solution (34%). Stability and better release of drug might be due to the small size of droplets in the self emulsifying formulation. These results suggested that the embelin SEDDS could be the better alternative to traditional oral formulation. Research findings are also consistent with previous studies which indicate that the SEDDS formulation will be valuable in the industry and may serve as a novel approach for the formulation development of hydrophobic drugs in a dosage form.

ACKNOWLEDGEMENT: The authors would like to acknowledge the Department of Pharmaceutical Sciences, Maharshi Dayanand University, Rohtak, Haryana for providing the necessary infrastructure and research facilities.

DECLARATION OF INTEREST: The authors declares no conflict of interest.

Neeraj*, V. Mittal and A. Nanda