Floating matrix tablets of metformin hydrochloride were developed and evaluated for increase bioavailability by increasing gastric residence time and sustained release of drug on the upper part of gastrointestinal tract thereby diminishing side effects and enhanced patient compliance. Metformin hydrochloride, an oral antidiabetic having narrow absorption window in the upper part of gastrointestinal tract, was formulated as floating matrix tablet using gas generating agent (potassium bicarbonate) and hydrophilic gelling polymer hydroxyl propyl methyl cellulose (hypromellose) by wet granulation technique. The prepared formulations were evaluated for floating time and in vitro drug release characteristics using modified dissolution method. All formulations possessed good floating properties with total floating time more than 12 hours. Optimization study included 22 factorial design with t50% and t80% as the kinetic parameters. Matrix characterization included photomicrograph, which showed definite entrapment of the drug in the matrix. Formulations with high amount of hypromellose were found to float for longer duration and provide more sustained release of drug. The formulated drug delivery system was found to be independent of pH. Release kinetics of formulations followed Higuchi model with anomalous non fickian diffusion. Hence it is evident from this study that effervescent floating matrix tablet could be a promising delivery system for metformin hydrochloride with sustained release action and improved drug availability.

INTRODUCTION: Diabetes mellitus is a syndrome characterized by chronic hyperglycemia and disturbances of carbohydrate, fat and protein metabolism associated with absolute or relative deficiencies in insulin secretion and/or insulin action. Diabetes particularly Non-Insulin Dependent Diabetes Mellitus (NIDDM) or Type II Diabetes Mellitus accounts for over 85% of diabetes worldwide and is the consequence of a deficiency in insulin action due to abnormalities at the cell surface or within the cell, a deficiency in insulin secretion or a combination of these processes. The deficit in insulin action results in hyperglycemia and other metabolic disturbances 1.

Metformin hydrochloride is a biguanide glucose-lowering agent that has been widely used in management of NIDDM. It improves glucose tolerance in NIDDM subjects, lowering both basal and postprandial plasma glucose. Metformin hydrochloride is incompletely absorbed from the gastrointestinal tract (GIT) with oral bioavailability of »50% due to narrow absorption window in the upper part of GIT. The drug is stable but the narrow absorption window of metformin hydrochloride in the upper part of GIT provides a rationale for developing a Floating Drug Delivery System (FDDS) for this drug. Such a dosage form (FDDS) would be retained for prolonged periods of time in stomach and release drug in a sustained manner, thus providing drug continuously to its absorption sites in a controlled manner and increases the magnitude of drug effect 2.

FDDS, float and can be retained in the stomach due to their lower bulk density than the gastric contents and remain buoyant in the stomach for prolonged period of time without affecting the gastric emptying rate of other contents 3. In the present study floating matrix tablets of metformin hydrochloride were prepared with hydrophilic gelling polymer (HPMC) and an effervescent agent (potassium bicarbonate) to provide sustained release of metformin hydrochloride upto 12 hours in the gastric medium.

Constant loading of 500 mg drug with other excipients were carried out, a sufficient volume of granulating agent (95%v/v ethanol) was added slowly. The mixture was then blended by geometric mixing as per the design, after enough cohesiveness was obtained. The granules were sieved (30 mesh) and dried in an oven at 45°C for 2 hours. The dried granules were then lubricated with magnesium stearate (1% w/w) and purified talc (1% w/w) and compressed on a hydraulic press using 13 mm flat punch.(4,5)  The composition of each formulated tablets are shown in Table 1.

In Vitro Floating Time Study: Floating time was determined by using a beaker containing 900 ml of 0.1 N Hydrochloric acid, pH 1.2 solution as a testing medium maintained at 37 ±0.5 oC. The time required to float the different experimentally designed matrix tablets of metformin was noted as floating (or buoyancy) lag time 6.  The floating duration of these tablets were determined visually.

In Vitro Drug Release Study: In vitro release study of Metformin Hydrochloride from the matrix tablets equivalent to 500 mg of drug was determined using the USP paddle apparatus with ring or mesh assembly containing 900 ml of 0.1 N Hydrochloric acid, pH 1.2 as dissolution medium in which the dosage form was fully submerged. The paddle rotation speed was kept at 50 rpm, and a temperature of       37 ± 0.5°C was maintained 7. Five ml samples were withdrawn at predetermined intervals (0, 1, 2, 3, 4, 5, 6, 7, 8, 9, 10, 11, 12 hours). The samples were replaced by its equivalent volume of fresh dissolution medium to maintain the sink condition. The withdrawn aliquots were filtered using whatman filter paper and assayed at 230 nm in UV spectrophotometer.

In Vitro Floating Time Study: Floating time was determined and the result showed a lag time for all the experimentally designed floating matrix tablets of metformin hydrochloride. Tablets remained afloat for more than 12 hours in the medium studied. This phenomenon might be due to the outermost hydrophilic colloid (HPMC) which upon contact with an acidic medium (gastric fluid) hydrated to form an outside gel barrier around the tablets (Figure 1 a, b) that acquired and maintained a bulk density of less than one thereby being buoyant in the medium. Formulations with high amount of HPMC led to increased floating duration. 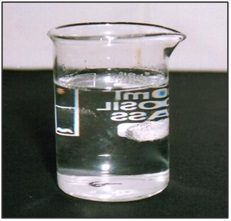 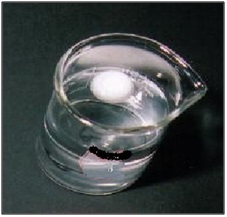 In Vitro Drug Release Study: Compared to conventional tablets of metformin hydrochloride without the polymer, all formulations tested showed sustained action of metformin hydrochloride over 12 hours (Figure 2). Results of the study showed higher amounts of HPMC retarded drug release probably due to increased swelling and increased gel barrier between the dissolution medium outside and the drug inside the formulation, as the concentration of HPMC increased from one level to another as is evident from the delayed t50% and t80% of formulations (F2 and F4) compared to the formulations containing lower amounts of HPMC (F1 and F3). Formulations with high amount of potassium bicarbonate (F3 and F4) gave an initial burst release followed by a more sustained action. This might be due to the presence of increased amount of potassium bicarbonate initially to cause excess carbon dioxide generation which not only decreased the lag time to float but also caused cracks or pores in the matrix of the granules and helped in increase the drug release. Later as gelling occurred (polymer activity), the process of carbon dioxide escaping from the matrix decreased. Formulation F4 was selected as an optimized formulation due to its suitable release profile as compared to other formulations. 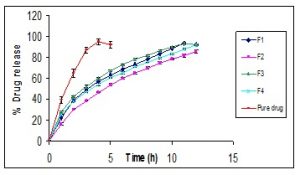 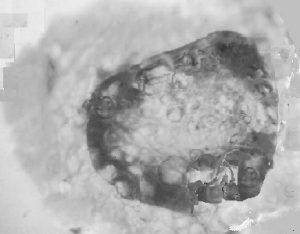 FIG. 3 (A): PHOTOMICROGRAPH OF MATRIX GRANULES 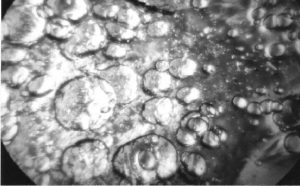 FIG. 3 (B): PHOTOMICROGRAPH OF FLOATING POROUS HYDROGELS IN 0.1 N HCl

CONCLUSION: Floating matrix tablets of metformin hydrochloride were successfully formulated using a swellable hydrophilic polymer (HPMC) and potassium bicarbonate for sustained drug release using wet granulation method. Upon contact with gastric fluid, hydrogels formed that showed presence of porous structure in matrix granules. Formulations with high amount of hypromellose were found to float for longer duration and provide more sustained release of drug. All of formulations followed Higuchi kinetics and the release mechanism was non-Fickian diffusion. Hence it is evident from this study that effervescent floating matrix tablet could be a promising delivery system for metformin hydrochloride with sustained release action and improved drug availability.