ABSTRACT: Diclofenac Sodium, being NSAID, its oral administration restricted due to its inherent problems. Hence in the present study, attempt has been made to design oral sustained release once daily matrix tablets of Diclofenac Sodium using combination of hydroxyl propyl methyl cellulose (HPMC) & PEG 6000 and to study the effect of various process and formulation variables like polymer properties and polymer viscosity on in-vitro release of drug. Sustained release tablets of Diclofenac sodium were prepared using different proportion of HPMC 4000 cps and PEG 6000 (F1, F2, F3……..F6). The physical properties of prepared tablets like hardness, friability, weight variation, thickness and drug content were studied and were found to be within the acceptable limits. In-vitro release studies were performed in Simulated Gastric Fluid (SGF) pH-1.2 for two hours and Simulated Intestinal Fluid (SIF) pH-6.8 for subsequent 10 hours by USP-I dissolution apparatus, in 900 ml at 37.5±0.5oC (stirring speed was 70 rpm). As amount of HPMC was increased from 5% to 30%, released rate was decreased. However, no appreciable change occurred, when the amount of HPMC was increased to 30% matrix tablets containing 25% HPMC4000 cps and 5% PEG 6000 were found to show good initial release (32% in 2 hours) and extended the release upto 10 hours. The “n” value was found to be 0.89, indicating anomalous (non-fickian) behavior of the drug release.

INTRODUCTION: Diclofenac is a non-steroidal anti-inflammatory drug (NSAID) taken to reduce inflammation and as an analgesic reducing pain in conditions such as arthritis or acute injury 1. It can also be used to reduce menstrual pain, dysmenorrhea 1. The name is derived from its chemical name: 2-(2,6-dichloranilino) phenylacetic acid. Diclofenac is available as a generic drug in a number of formulations 1. Over the counter (OTC) use is approved in some countries for minor aches and pains and fever associated with common infections 1.

The goal of any drug delivery system is to deliver a therapeutic amount of drug to the proper site in the body and to maintain a desired concentration 2. The development of oral controlled release dosage forms has attracted much attention in the recent years and hydrophilic matrix tablets are among the most widely used of the numerous controlled releases dosage forms 3.

Hydroxypropylmethylcellulose (HPMC) is hydrophilic cellulose ether widely used as excipients in controlled release preparation, due to their release behavior of the drug 4. When these formulations meet water there is a rapid hydration of the macromolecules in the solid liquid interface, followed by a formation of a viscous layer 5. The matrix system produced as a result of this process can pass along the gastrointestinal tract without breaking up, releasing the drug progressively 6.

Hence, in the present investigation, an attempt has been made to fabricate a controlled release dosage form of theophylline using HPMC as matrix material with other commonly used tablet excipient. The in vitro release studies were conducted for all the formulations and an attempt has been made to study the drug release kinetics from the formulations.

Evaluation of Granules: The following parameters were used;

The granules of different formulations were evaluated for angle of repose, LBD, TBD and compressibility index. The granules indicated good flowability with the angle of repose values 25-30° according to fixed funnel and free standing cone method. The results of compressibility index lies between 10.34±0.03 and 12.36±0.05%, which is below 15% indicating good to excellent flow properties (Table 1).

All tablet formulations were subjected to various evaluation parameters and the results obtained were within the range (Table 2).

The weight variation test indicates that all the tablets were uniform with low standard deviation values. The tablets mean thickness and mean diameter values ranged from 3.2±0.40 mm and 3.4±0.45 mm, respectively. The hardness of all the tablets was within the range of 4.2±0.8 to 5.5 ±0.9 kg/cm2. The loss in friability test was in a range of 0.20 to 0.41%. The percentage drug content for different tablet formulations were varied from 99.5% to 101.2%, were found to be within range.

Dissolution was also carried out by using paddle method, keeping the rotation at 50 rpm. It was observed that the tablets in buffer solution settled down at bottom of the flask and swelled considerably to release the drug from matrix tablet (Fig. 1). 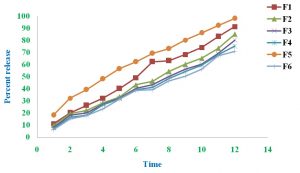 There was no significant difference observed between basket and paddle method under same experimental conditions (p>0.05) using student ‘t’ test method of data analysis. From the above results it can be concluded that, HPMC can be used as an effective matrix material to retard the release of Diclofenac sodium for prolonged period of time. In turn, this could be useful for cost effectiveness and better patient compliance. However, in vivo studies are needed to carry out its potential effect by conducting the bioavailability studies.

As per the study it was found that the F5 shows the best results of in-vitro test of friability, hardness, thickness and dissolution characteristics. F5 formulation shows the prolong dissolution up to 24 hrs due to HPMC polymer with PEG 6000 as release retardant.

ACKNOWLEDGMENTS: Author (Rahul Singh) acknowledges Mr. Vijendra Suryavanshi, Asst. Prof. SRIP, Kumhari for his kind and valuable guidance in making this research work a success and all others involved in this research work.