In the present study, an attempt has been made to evaluate the effect of hydrophilic polymers on the release profile of drug from matrix system. Salbutamol sulphate, an anti-asthmatic agent, was used as a model drug to evaluate its release characteristics from different matrices. Matrix tablets of salbutamol sulphate were prepared by direct compression process using methocel K100M CR polymer. Release kinetics of salbutamol sulphate from these sustained release matrices in distilled water using USP paddle method with sinker for 8 hours were studied. Statistically significant differences were found among the drug release profile from different formulations. Higher polymer content (70%) in the matrix decreased the rate of the drug due to increased tortuosity and decreased porosity. At lower polymeric level (30%), the rate of drug release was elevated. The release mechanism was explored and explained with zero order, first order, Higuchi and Korsmeyer equations. The results generated in this study showed that the profile and kinetics of drug release were functions of polymer type, polymer level and physico-chemical properties of the drug.

INTRODUCTION: Asthma is a common chronic inflammatory disease characterized by variable and recurring symptoms, airflow obstruction, and bronchospasm with wheezing, coughing, chest tightness, and shortness of breath. These acute episodes may be triggered by such things as exposure to an environmental stimulant (or allergen), cold air, exercise or exertion, or emotional stress. In children, the most common triggers are viral illnesses such as those that cause the common cold 1. During asthma attacks, the smooth muscle cells in the bronchi constrict, the airways become inflamed and swollen, and breathing becomes difficult. This is often referred to as a tight chest and is a sign to immediately take medication 2-3. The treatment of asthma generally includes conventional oral dosage forms like tablets, capsules, oral liquids and inhalation therapy, but oral administration is the most widely accepted route of delivery due to its ease of administration, convenience, compatibility and patient compliance.

Salbutamol is a relatively selective beta-2 adrenoreceptor stimulant. It is more specific than both isoprenaline and orciprenaline for adrenergic beta-2 receptor, agonist used for the relief of bronchospasm in conditions such as asthma and COPD (Chronic obstructive pulmonary disease). Salbutamol sulphate is a white or almost white odourless powder. It is soluble in four parts of water; slightly soluble in 95% alcohol, chloroform and ether. It is chemically described as 1- (4-hydroxy- 3- hydroxymethylphenyl)- 2- (tert- butyl amino) ethanol sulphate. The elimination half-life of inhaled or oral salbutamol is between 2.7 and 5 hours. Its short elimination half life calls for frequent daily dosing (2 to 3 times) and therapeutic use in chronic respiratory diseases necessitates its formulation into sustained release dosage form. Therefore, the development of sustained release dosage form of salbutamol is of therapeutic relevance and can be used to provide a consistent dosage through sustaining an appropriate level of the drug over time.

Matrix systems appear to be a very attractive approach from the economic as well as from the process development and scale-up points of view in controlled-release systems 4-5. Hydroxypropyl methylcellulose (HPMC) or methocel K100M CR is used frequently as a rate-controlling polymer in matrix tablets. HPMC offers the advantages of being non-toxic and relatively inexpensive; it can be compressed directly into matrices and is available in different chemical substitution and hydration rates and viscosity grades 6-7.

HPMC tablets hydrate upon contact with water and a rate controlling gel layer forms around the solid inner core. The drug release in soluble drugs is controlled by the rate of diffusion through such a gel and in poorly water-soluble drugs, by a combination of diffusion and gel erosion 8-10. It is known that the HPMC dissolution rate is also the dominant process in drug release from matrices and that the dissolution rate of HPMC depends on the matrix shape, dimensions, and the type of dissolution medium and polymer 11-13. Pham and Lee 14 found that polymer dissolution played a more important role in regulating drug release for low-viscosity grades of HPMC.

Sustained-release oral delivery systems are designed to achieve therapeutically effective concentrations of drug in the systemic circulation over an extended period of time, thus achieving better patient compliance and allowing a reduction of both the total dose of drug administered and the incidence of adverse side effects 15. Among the different approaches studied with this aim, matrix systems still appear as one of the most attractive from both the economic as well as the process development and scale-up points of view 16. Moreover, it has been shown that the suitable combination of more types of polymers as matrix-forming materials enables appropriate modifications of the release characteristics of the drug from the dosage form 17-18.

Preparation of matrix tablets: Tablets were prepared by direct compression process. In all cases, the amount of the active ingredient was 9.650 mg and the total weight of the tablet was 150 mg (Table 1).

During granulation process matrix-forming agents, talc, methocel, magnesium stearate, avicel pH 102 and the active ingredient were weighed properly. Firstly active ingredient, talc and Methocel were mixed for 10 minutes properly. Dried granules were sieved through 20 mesh SS screen to get compressible particle. Lubricants are added during blending part. During blending total mass was taken in a photo film container and blended in a laboratory designed small drum blender machine for about 30 minutes.

Particular attention was given to ensure thorough mixing and phase homogenization. The appropriate amounts of the mixture were accurately weighed in an electronic balance for the preparation of each tablet and finally compressed using Manesty D type 16 station compression machine with a 10.00 x 8.80 mm concave, plain faced punch and die set. The compression force was 1.5 ton. Before compression, the surfaces of the die and punch were lubricated with purified talc. All the preparations were stored in airtight containers at room temperature for further study.

Control tests for matrix tablets: The tablets of the proposed formulations (SBSK100F1 to SBSK100F5) were evaluated for hardness, weight variation, thickness, friability and drug content. Hardness of 10 matrix tablets from each formulation was measured using Hardness tester (Erweka GMBH, 300H model, Germany). Friability of the tablets was determined in a Roche friabilator (Campbell Electronics, Mumbai). A slide calipers was used to measure the thickness the tablets.  Weight variation test was performed according to the official method. Drug content for sulbutamol sulphate was carried out by measuring the absorbance of the sample at 277 nm using Shimadzu UV spectrophotometer and comparing the content from a calibration curve prepared with standard sulbutamol sulphate in the same medium.

In vitro dissolution study of tablets: Dissolution studies were conducted in USP paddle method in the metallic drive shaft rotated at a speed of 50 rpm and the temperature was maintained at 37°C±0.5oC. As the tablets have floating tendency, sinker was used to keep immersed into the medium. This operation was continued for 8 hours. At every 1-hour interval samples of 5 ml were withdrawn from the dissolution medium and replaced with fresh dissolution medium to maintain the volume constant. After filtration and appropriate dilution, the sample solution was analyzed at 277 nm for Salbutamol sulplhate by UV spectrophotometer (Shimadzu, Japan). The amounts of drug present in the samples were calculated with the help of straight-line equation obtained from the calibration curves for respective drug. The dissolution study was continued for 8 hours to get a simulated picture of the drug release in the in-vivo condition and drug dissolved at specified time periods was plotted as percent release versus time (hours) curve. This drug release profile was fitted into several mathematical models to get an idea of the release mechanism.

Kinetic analysis of release data: Different kinetic models (zero-order, first-order, Higuchi’s and korsmeyer’s) were applied to interpret the release profile from matrix system. The best fit with higher correlation (R2>0.98) was found with the Higuchi’s equation. However, two factors diminish the applicability of Higuchi’s equation to matrix systems. This model fails to allow the influence of swelling of the matrix (upon hydration) and gradual erosion of the matrix. Therefore, the dissolution data were also fitted according to the well-known exponential equation (Korsmeyer equation), Eq. (1), which is often used to describe the drug release behavior from polymeric systems 19.

Where, Mt is the amount of drug release at time t; Mf is the amount of drug release after infinite time; k is a release rate constant incorporating structural and geometric characteristics of the tablet; and n is the diffusional exponent indicative of the mechanism of drug release. Talukder et al., 20 applied this equation to evaluate the drug release mechanism from xanthan gum matrix tablets. To clarify the release exponent for different batches of matrix tablets, the log value of percentage drug dissolved was plotted against log time for each batch according to the equation 1. A value of n = 0.45 indicates Fickian (case I) release; >0.45 but <0.89 for non-Fickian (anomalous) release; and >0.89 indicates super case II type of release. Case II generally refers to the erosion of the polymeric chain and anomalous transport (non-Fickian) refers to a combination of both diffusion and erosion controlled-drug release 21. 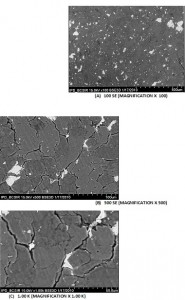 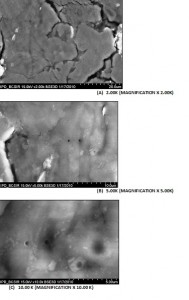 Physical Evaluation of salbutamol sulphate matrix tablets: The tablets of the proposed formulations (SBSK100F1 to SBSK100F5) were evaluated for hardness, weight variation, thickness, friability and drug content. The thickness of the tablets ranged from 4.1 to 4.5 mm. The hardness and percentage friability of the tablets of all batches ranged from 5.77 to 6.28kg/cm2 and 0.77 to 0.86%, respectively. The average percentage deviation of 20 tablets of each formula was less than ± 5%. Drug content among different batches of tablets ranged from 9.6501mg to 9.6505mg. Thus, all the physical parameters of the matrices were practically within control.

Effect of methocel K100M CR on release pattern of salbutamol sulphate: Different matrix tablets containing salbutamol sulphte as active ingredient having methocel K100 MCR polymer 30%, 40%, 50%, 60%, and 70% respectively of total tablet weight with the formulation code SBSK100MF1, SBSK100MF2, SBSK100MF3, SBSK100MF4 and SBSK100MF5, were prepared to evaluate the effect of this polymer. After preparation according to formulation shown in  table-1 their dissolution studies were carried out in paddle method with a sinker at 50 rpm in distilled water medium at 37o C (±0.5o C). Three tablets from each formulation were used in dissolution study. The release profile of salbutamol sulphate was monitored up to 8 hours. To determine the effects of polymers on the drug release, different kinetic models such as Zero order, First order, Korsmeyer, Higuchi were investigated (Fig. 2 (A-D)). 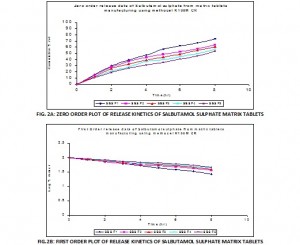 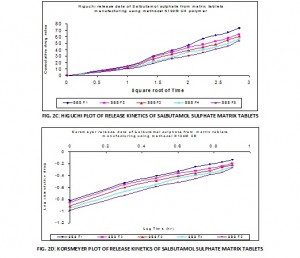 A release profile of Salbutamol sulphate containing methocel K100M CR matrix tablet of five formulations was obtained from the graphs. The total percentage of salbutamol release from the formulations SBSK100MF1, SBSK100MF2, SBSK100MF3, SBSK100MF4, and SBSK100MF5 were 73.28%, 64.03%, 60.32%, 56.62%, and 53.83% respectively. It was observed that the release rate was extended with the increase of polymer percentage and with the decrease of avicel pH 102. The highest percent of drug release (73.28%) within 8 hours was obtained from SBSK100MF1 where polymer content was 30% of total tablet weight and that of talc was 3%. However, in SBSK15MF5, the polymer content was 70% of total tablet weight and the release of drug was controlled with 53.83 % within 8 hours. The rate of drug release was found to be inversely related to the amount of methocel K100M CR present in the matrix structure, i.e. the drug release increased with decrease in the polymer content of the matrix tablet (Fig. 3). The release kinetics data has been mentioned in the Table 2. 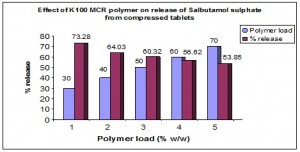 MDT value was used to determine the drug-retarding efficacy of the polymer. From the Table-3, it is evident that that all the formulations had satisfactory MDT values for sustained release of salbutamol sulphate. The MDT values of methocel K100 M CR increased with the increase in the polymer load (Fig. 4).