A reverse phase HPLC method is described for the determination of Ziprasidone HCl capsule by analytical method. Chromatography was carried out on an ODS C18 column using a mixture of buffer solution, acetonitrile and methanol (45: 40: 15v/v/v) as the mobile phase at a flow rate of 1.5mL/min. Detection was carried out at 230nm. The retention time of the drug was 7-9 min. The method produced linear responses in the concentration range of 50-150µg/mL of Ziprasidone .The method was found to be applicable for determination of the drug in capsules.

Chromatographic conditions: A gradient HPLC system (Waters) with Alliance2690 with millennium database software, detector-PDA waters. RP C18 column (150×4.6 mm), particle size 5µ) was used. Freshly prepared buffer solution, acetonitrile and methanol (45:40:15v/v/v) mixture was used as the mobile phase. Both methanol and phosphate buffer were filtered through 0.45 µ membrane filter and sonicated before use. The flow rate of the mobile phase was maintained at 1.5ml/min. The detection was carried out at 230 nm.

Estimation of Ziprasidone HCl: About 110mg of Ziprasidone HCl was weighed accurately and transferred into a 200mL volumetric flask and dissolved in 100mL methanol. The solution was sonicated for 5 min and then the volume made up with 200mL of diluent.10ml of standard stock solution was diluted to 50ml with diluent and mixed well. Filtered through 0.45µ membrane filters and filtered. The flow rate of mobile phase was fixed at 1.5ml/min and detection was carried out at 230nm and the corresponding chromatograms are shown in Fig. 1. 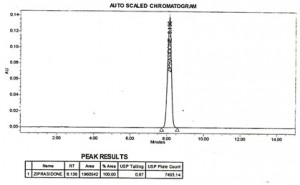 Estimation of the Drug in Capsule Dosage Forms: Commercial brands of capsules namely Geodon were chosen for testing the suitability of the proposed method to estimate Ziprasidone in capsule formulations. For this, 20 capsules were weighed and powdered. Capsule powder equivalent to 100 mg of Ziprasidone was transferred to a 200 mL volumetric flask. Dissolved in 100ml of diluent by sonicating it for 10min to ensure complete solubility of the drug and made upto the volume with diluents and mixed well. Further dilute 10ml to 50ml with diluent, then filtered through 0.45µ membrane filter. 10µL of the solution was then injected into the column. The mean peak area of the drug of five such determinations was calculated and the drug content in the capsules was quantified using the regression equation obtained for the pure sample.

RESULTS AND DISCUSSION: The present study was aimed at developing a sensitive, precise and accurate HPLC method for the analysis of Ziprasidone in pharmaceutical dosage forms. For this, mixture of buffer, acetonitrile and methanol (45:40:15v/ v/v) proportion was found to be the most suitable mobile phase as the chromatographic peaks obtained with this system were better defined and estimation of Ziprasidone Hydrochloride resolved and all almost free from tailing (figure 2). Under the above-mentioned conditions, Retention time obtained for Ziprasidone was 8 min. 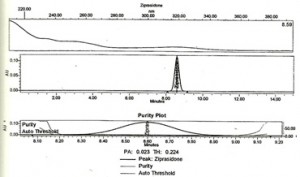 The peak areas of the drug were reproducible as indicated by low coefficient of variation (1.02%). A good linear relationship (r = 0.999) was observed between the concentrations of Ziprasidone and respective peak areas. The regression curve was constructed by linear regression fitting and its mathematical expression was. The drug content in the capsules was quantified using the proposed analytical method. The mean amount of Ziprasidone obtained in capsule dosage forms is shown in figure. This reveals that the method is quite precise. The absence of additional peaks in the chromatogram indicates non-interference of the common excipients used in the capsules. It can be concluded that the proposed HPLC method is sensitive and reproducible for the analysis of Ziprasidone HCl in pharmaceutical dosage forms in a short analysis time. The method was duly validated by evaluation of the required parameters.