ABSTRACT: This experimental work aimed at formulating and systemically characterizing mucoadhesive amoxicillin microspheres for the eradication of H.pylori and its associated diseases. The  microsphere batches were prepared by emulsion-solvent evaporation technique with the use of carbopol-934P as mucoadhesive polymer and ethyl cellulose as carrier polymer. Initially 27 formulations were prepared using 33 factorial design using Design Expert software. Results of preliminary trials showed that amount of drug-to-polymers ratio, emulsifying agent and stirring speed influenced the characteristics of microspheres. Prepared microspheres were discrete, spherical, free flowing with good percentage of drug entrapment. An in-vitro mucoadhesive test showed that amoxicillin microspheres adhered more strongly to the gastric mucous layer and could retain in the gastrointestinal tract for an extended period of time. A 33factorial design was employed to study the effect of independent variables, drug-to-polymer-to-polymer ratio (amoxicillin-ethyl cellulose-carbopol-934P) (X1), Emulsifying agent (X2) and stirring speed (X3) on dependent variables, drug entrapment (Y1), particle size (Y2). The best batch exhibited a high drug entrapment efficiency of 66% and In vitro mucoadhesion after 1 h was 79%. A sustained drug release was obtained for more than 12 h. The morphological characteristics of the mucoadhesive microspheres were studied under a scanning electron microscope. In vitro release test showed that amoxicillin released slightly faster in pH 1.2 hydrochloric acid than in pH 7.8 phosphate buffer. In conclusion, the prolonged gastrointestinal residence time and enhanced amoxicillin stability resulting from the mucoadhesive microspheres of amoxicillin might make a contribution to H. pylori complete eradication.

Although, the release from the microspheres is limited, because of their short residence time at site of absorption. So, it would, be advantageous to have means for providing an intimate contact of the drug delivery system with the absorbing membranes 4-7. This can be achieved by using mucoadhesion properties to microspheres and developing mucoadhesive microspheres.

This mucoadhesive drug delivery system shows the advantage such as efficient absorption and enhanced bioavailability of drugs owing to a high surface-to volume ratio, a much more intimate contact with the mucus layer and specific targeting of drugs to the absorption site 8-11. Carbopol-934P as an anionic polymer is used in mucoadhesive systems by several researchers 12-16. Carbopol-934P was used as a polymer in the preparation of mucoadhesive microspheres owing to its good mucoadhesive and biodegradable properties and ethyl cellulose as carrier polymer for microspheres.

Amoxicillin is a broad-spectrum, beta-lactam antibiotic for the treatment of various bacterial infections, including Helicobacter pylori (H. pylori). It inhibits the cell wall biosynthesis of H. pylori at and is first line drug for the treatment of H. pylori induced peptic and duodenal ulcers. Clinical studies using amoxicillin showed least resistance compare to Clarithromycin or Metronidazole against H. pylori 17-18.

Hence local diffusion of drug into gastric mucosa is essential for therapeutic efficacy  various delivery systems of Amoxicillin have been prepared in recent time for increasing its local availability and efficacy such as polymer matrix tablets, gastroretentive floating systems,. Most of these studies emphasised on increasing the retention time of drug in the stomach and increasing the stability of antibiotics in acidic environment of stomach. But these systems could not assist in the complete eradication of bacterium. Since last decade, the strategy for effective delivery of antibiotics to H. pylori has shifted to the use of mucoadhesive based delivery systems based on the fact that mucoadhesive particulate show longer retention in stomach and thus deliver the antibiotic locally in the stomach mucosa for longer duration. These systems provide an intimate contact with mucus membrane due to polyvalent adhesive interaction or electrostatic attraction, H-bond formation, van-der-Waal forces and other. The system has an additional advantage of protecting acid sensitive drugs against acid degradation and offers effective drug diffusion across the mucus layer. 19

The H. pylori has a survives in the environment of the stomach by colonizing in the gastric mucosal layer and it adheres to the surface of mucus epithelial cells and penetrate using flagella.

Mucoadhesion helps in increasing the gastric residence time of particles, also thick viscoelastic mucosal gel do not allow antimicrobial drugs to penetrate through it easily 20.  The Swelling of the polymer hinders docking it in gastric mucus and strong mucoadhesion decrease the mobility and thus interpenetrate penetrability in to mucus. In addition, gastric motility and proteolytic activity make mucus turnover intense there by make gastric residence of formulation shorter 21. Hence efficient adherence to mucus could make the system incapable of penetrating across the mucus layer and entering the underlying epithelia 22.

The present work is an attempt to develop a novel bi-specific, biodegradable, mucopenetrating system for delivery of Amoxicillin to deep mucus layers near the sanctuary of the H. pylori.

In context of the above principles, a strong need was felt to develop a dosage form that delivered amoxicillin in the stomach and would increase the efficiency of the drug providing sustained action. Thus, an attempt was made in the present investigation to use carbopol-934P as a mucoadhesive polymer and ethyl cellulose as a carrier polymer and prepare mucoadhesive amoxicillin microspheres.

Mucoadhesive microspheres of Amoxicillin were prepared by emulsion solvent evaporation method using Carbopol 934 and ethyl cellulose as polymers. In the first step ethyl cellulose was dissolved in 200 mL of ethanol, then drug and polymer were dispersed in the solution of ethyl cellulose under stirring. The preliminary trial batches were prepared and optimized using 33 Factorial design earlier by varying the drug-to-polymer-to-polymer (amoxicillin-ethyl cellulose-carbopol-934P) ratio in range of 1:3:1 to 1:3:3 %. The final  mixture was extruded through a syringe (gauge No. 20) in 500 mL of liquid paraffin (mixture of heavy and light, 1:1 ratio) containing Span 80 and stirring was carried out using a propeller stirrer (Remi, Mumbai, India) at 1000 rpm. The stirring was done for three hours. In preliminary trial batches the amount of emulsifying agent (1-3%), the drug: polymer concentration (1:3:1) to (1:3:3) % and stirring speed (500-1000 rpm) were varied.

For optimization  Factorial design approach was used, total twenty seven formulations were prepared, the drug-to-polymer-to-polymer ratio, concentration of emulsifying agent and stirring speed were varied and all other parameters were kept same. The Microspheres prepared were filtered and washed several times with petroleum ether (80:20) to remove traces of oil. The microspheres were then dried at room temperature (25oC and 60 % RH) for 24 hrs. Formulated Batches are shown in Table 1.

Further Batch no: A12, A24 and A27 were selected for further study on the basis of good drug entrapment efficiency.

A response surface design model with 3 factors, 3 levels and 27 runs was selected for the optimization study. The polynomial equation generated by this experimental design (using Design Expert 7.1.6) was as follows:

On the basis of the preliminary trials a 33 full factorial design was employed to study the effect of independent variables, i.e. Polymer Concentration (X1) , Emulsifying cagent concentration  (X2) and the stirring speed (X3) on dependent variables drug entrapment and Particle size. Further evaluations were performed on the selected formulations.

Two hundred milligrams of accurately weighed microspheres were crushed in a glass mortar-pestle and the powdered microspheres were suspended in 10 mL phosphate buffer (pH 7.8). After 24 hrs the solution was filtered and the filtrate was analysed for the drug content. The drug entrapment efficiency was calculated using the following formula: Practical drug content/Theoretical drug content × 100. The drug entrapment efficiency for trial batches is reported in Table 1.

The in-vitro wash-off test as reported by Lehr et al 25 was used for the evaluation of percent mucoadhesion. A 1x1 cm piece of rat stomach mucosa was tied onto a glass slide (-3 inch-by-1inch-) using thread. Microspheres were spread (~50) onto the wet rinsed tissue specimen and the prepared slide was hung onto one of the groves of a USP tablet disintegrating test apparatus with continuous oxygen supply. The disintegrating test apparatus was used where the tissue specimen was given regular up and down movements in the beaker of the disintegration apparatus, containing gastric fluid (pH 1.2), for 10 hrs, the number of microspheres still adhering onto the tissue was counted. The results of in-vitro wash-off test after 10 hrs of trial batches are shown in Table 2 and Fig.1. 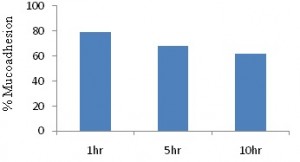 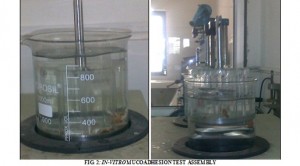 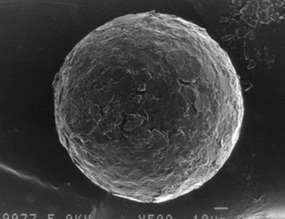 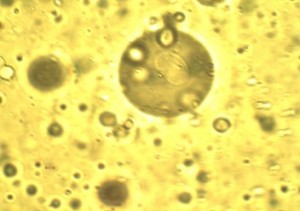 50 mg of microspheres were allowed for swelling in SGF (pH 1.2) for 4 h, the excess adhered liquid was removed by blotting with filter paper and weighed.26-27

The swelling Index was calculated using the following equation:

Xs   is the weight of the swollen microspheres after time t,

X0 is the initial weight at zero time.

FIG.5: SWELLING INDEX OF MICROSPHERES INITIALLY AND AFTER 4 HRS

The drug release study was carried out using USP XXIV basket apparatus (Electrolab, TDT-06T, India) at 37°C±0.5°C and at 100 rpm using 900 mL of phosphate buffer (pH 7.8) as a dissolution medium (n=5) as per USP XXVI dissolution test prescribed for amoxicillin tablets. Microspheres with the weight equal to 100 mg of amoxicillin were used for the test. 5 ml of sample from solution was taken at predetermined time intervals and were filtered through a 0.45 µm membrane filter, properly diluted, and analyzed spectrophotometrically. An equal amount of fresh dissolution medium was added immediately after taking of the test sample. Dissolution rate of drug dissolved at various intervals was calculated. The release profile is shown in Table 3. 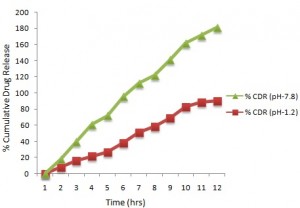 FIG.6: IN VITRO DRUG RELEASE PROFILE OF FORMULATION A27

The kinetic of drug release from the gastro retentive films were established using the formula given by peppas, used to study the drug release behavior from the polymeric drug delivery systems. The release kinetic parameters were calculated according to peppas equation.

Mt/Mw is the fractional release of the drug, t denotes the release time, k represents a kinetic constant, incorporating structural and geometrical characteristics of the controlled release device, and n is the diffusional exponent and characterizes the type of release mechanism during the dissolution process. Table 4 and 5 shows thr release kinetics of A27 batch in pH 1.2 and 7.4. Fig. 7 to 14 shows the release kinetics graph of A27 batch in pH 1.2 and 7.4

TABLE 4: RELEASE KINETICS PROFILE OF FORMULATION A27 IN pH 1.2.

TABLE 5: RELEASE KINETICS PROFILE OF FORMULATION A27 IN pH 7.4. 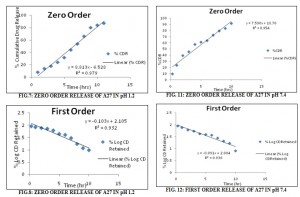 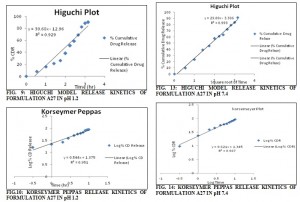 The Model F-value of 3.61implies the model is significant. There is only a 1.10% chance that a “Model F-Value” this large could occur due to noise.

Results of the polynomial equation indicate that the effect of X1 (drug polymer ratio) is positive and more significant than X2(Emulsifying agent) and X3 (stirring speed) i.e., as the drug polymer ratio was increased there was an increase in the polymer concentration, which lead to increased particle size, whereas as with the increase in stirring speed particle size was decreased.  The contour plot and response surface graphs of Particle size response are given in Fig. 15 and 16. 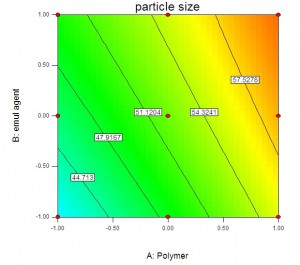 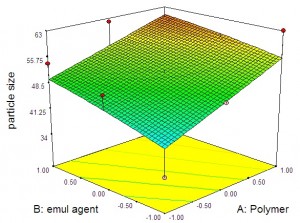 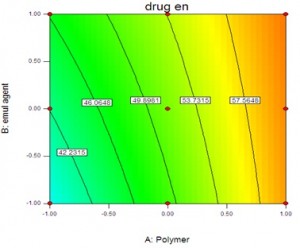 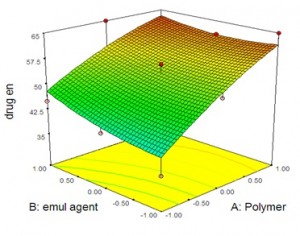 The results of a 33 full factorial design revealed that the polymer to-drug ratio, emulsifying agent and stirring speed significantly affected the dependent variables percentage drug entrapment efficiency and particle size. The microspheres of the best batch exhibited a high mucoadhesion of 68% after 10h, 66% drug entrapment efficiency. The in vitro release studies indicate that the mucoadhesive microspheres of Amoxicillin could sustain the release of the drug for more than 24 h.