ABSTRACT: The aim of this study was to develop and optimize nano-liposomally entrapped ketotifen fumarate (KTF) loaded dry powder inhalation (DPI) formulation using response surface methodology (RSM). Based on the 33 full factorial design (33FFD), the mass ratio of KTF solution to soybean phosphatidylcholine (SPC94), KTF/ SPC94 to 0.5 M lactose solution that after lyophilization produce lyophilized liposomal powder (LLP) and LLP to coarse lactose carrier (CLC) were selected as independent variables with KTF liposomal encapsulation efficiency (%EE), liposomes particle size (PS) and fine particle fraction (%FPF) as dependent variables. The aerosolized liposomal dry powder was prepared utilizing vesicular phospholipid gel technique followed by lyophilization after incorporating it into lactose solution as a cryoprotectant. A full and reduced second-order polynomial models were developed for each response using multiple linear regression analysis. Applying a desirability function method, the optimum parameters were: KTF: SPC94 of 0.045, KTF/ SPC94: 0.5 M lactose of 0.389 and LLP: CLC of 0.080. At this optimum point, the %EE, PS and %FPF were found to be 52.68%, 444.00 nm and 20.46%, respectively. The powder bulk density of (0.31 gm/cm3) is within the acceptable range for pulmonary delivery, whereas the angle of repose of (30.14 θ) indicates good powder flowability. The in vitro release study of KTF from the optimize liposome suspension revealed that Korsmeyer – Peppas model of release gives the best fitness and the mechanism of release was non-Fickian, whereas Weibull 3 model was the best for fitting the data obtained indicating that the curve of release was parabolic (b<1, case 3). Thus, response surface methodology aid in developing in situ generated sphere liposomal vesicles on lactose carrier particles that will impart a continued drug release for more than 12 hours without a significant burst effect. 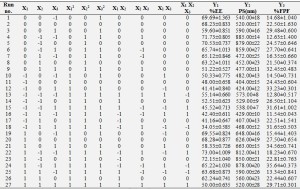 By using lactose as a cryoprotectant sugar at 500 mM in order to make sure that its existence on the liposomal bilayer both sides would decrease the liposomes permeability and hence enhance the KTF EE. Results revealed that a higher lactose ratio has a significant-negative effect on the KTF EE due to the lyophilization process will impart liposomal vesicles stability through their polar head groups hydrating with the hydroxyl groups of lactose that replaces water molecules. Thus, the vesicles will retain their contents and do not re-encapsulate due to an optimum surface of crystallized sugar by which liposomes can constrict and get coated on 21.
Liposomes Particle Size: Photomicrographs (1000x) before dehydration and after rehydration under plain are shown in figure 2a and 2b. The effect of independent variables on KTF liposomes PS is shown in figure 3a, 3b and 3c.
Based on the sum of squares shown in table 4, both KTF: SPC94 (X1) and KTF/SPC94: 0.5M lactose (X2) have significant (p<0.05) effect on the KTF liposomes PS, whereas LLP: CLC (X3) was not significant. As SPC94 concentration increase the PS increase and this is due to the fact that phospholipids constitute the liposome membrane and their concentration have a direct effect on the liposomes PS 22.
Lactose ability to preserve the liposomal structural integrity during hydration is due to liposome polar head groups hydration with the lactose hydroxyl groups that maintains the liposome stability. Therefore; an optimal cryoprotectant concentration is essential in order to provide an adequate surface area for the adherence of the condensed liposome bilayer 23. 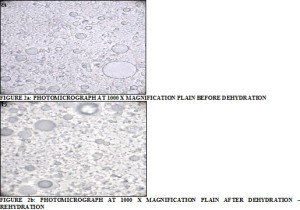 FIGURE 2a: PHOTOMICROGRAPH AT 1000 X MAGNIFICATION PLAIN BEFORE DEHYDRATION

FIGURE 2b: PHOTOMICROGRAPH AT 1000 X MAGNIFICATION PLAIN AFTER DEHYDRATION – REHYDRATION

Fine Particle Fraction: At minor formulation parameters ratios, there will be an approximate strength of 113.636 µg of entrapped drug per 200 mg of the formulation. The only parameter with a significant effect on the FPF shown in table 3 is LLP: CLC (X3). Generally, an optimum amount of lactose carrier is required for improving FPF and optimizing the in vitro deposition of liposomal dry powders. Figure 4a, 4b and 4c shows the effect of the independent variables on the FPF. Figure 4b and 4c shows an ascending from the lactose carrier side, i.e., C: C which proof that as lactose carrier ratio increase there will be an increase in the FPF. 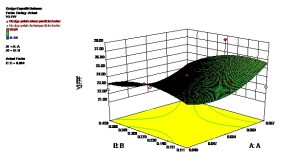 Check Point Analysis: Eight preparations were prepared and evaluated for the response variables. The compositions, predicted and experimental values, percentage error and p-value are listed in table 5. For each variable, i.e., EE, PS and FPF, the linear correlation between the observed and predicted response is plotted along with R2 values as shown in figure 5a, 5b and 5c respectively. The differences between the predicted and experimental values considered to be insignificant when the p-value>0.05. Also, higher R2 values (0.936, 0.949 and 0.922 for EE, PS and FPF respectively) of the linear correlation plots indicate the fitness and RSM with a high predictive capability. 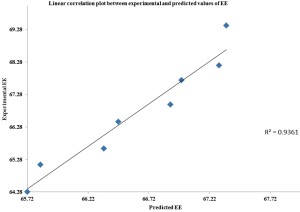 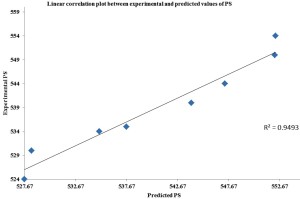 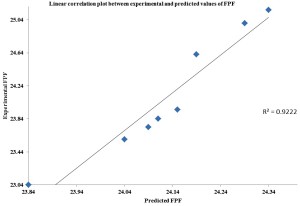 Optimization: By putting the aim and the importance of each variable and response, the optimum formula can be fulfilled. Table 6 shows the optimized batch (KTF: SPC94 ratio = 0.045; KTF/SPC94: 0.5M lactose ratio = 0.389 and LLP: CLC ratio = 0.080) that was prepared and the comparison between the experimental and predicted values. P>0.05 indicates the insignificant differences between the experimental and predicted values. 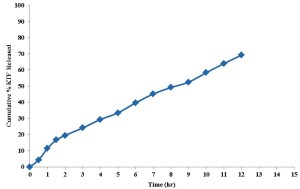 TABLE 6: THE OPTIMIZED FORMULA DERIVATION
Constrains Lower Limit Upper Limit Predicted Solution [A] Experimental Results [B] Comparison of A and B (P Value)
Name Aim Importance
KTF: SPC94 Minimize 3 -1 1 0.045 0.045
KTF/SPC94: 0.5M lactose Maximize 3 -1 1 0.389 0.389
LLP: CLC Minimize 3 -1 1 0.080 0.080
EE Maximize 3 34.05 73.00 54.53 52.68±0.749 P > 0.05, Non-significant
PS Minimize 3 404 885 442.32 444.00±9 P > 0.05,
Non-significant
FPF Maximize 3 11.54 35.64 21.03 20.46±0.697 P > 0.05,
Non-significant
Bulk Density and Angle of Repose: The obtained optimized liposomal KTF dry powders formulation bulk density was (0.31 gm/cm3) and become (0.53 gm/cm3) when added to coarse lactose carrier (CLC) because of the mixture boarder particle size, whereas the angle of repose was (30.14 θ) which indicates a good powder flowability 24.
In-vitro Release: The standard curve of KTF was determined to be y=0.028x (R2=0.999, where x is the concentration of KTF and y is the absorbance of KTF), with concentrations ranging from 5 to 30 µg/ml. In case of free KTF solution at 4.7 mg/ml all of the KTF had emptied within approximately 11 min into the receptor compartment through the dialysis membrane. Therefore, KTF encapsulated in liposomes (10 mg/ml) will take about more than 12 hr to permeate the membrane. Thus, the non-entrapped KTF (47% of the total KTF) in the liposome suspension (10 mg/ml) rapidly emptied through the membrane within the first 0.183 hr, corresponding to the rate of KTF transport observed for the 4.7 mg/ml solution, i.e., 11 min. This is due to that the liposome vesicles were unable to cross the dialysis membrane and the entrapped KTF must first release from the liposomes prior to migration through the membrane. Noticeably, around 69% of the entrapped KTF was able to be released from the liposomes after 12 hr, proofing liposomes as a feasible delivery system for sustaining KTF release. Figure 6 shows the release profile of KTF from the liposome suspension, taking into account only the entrapped amount of KTF crossing the dialysis membrane after being released from the liposomes.

FIGURE 6: IN VITRO CUMULATIVE RELEASE PROFILE OF KTF FROM OPTIMIZED KTF LIPOSOME SUSPENSION (ONLY ENTRAPPED KTF) IN PHOSPHATE BUFFER pH 7.4 AT 37 ± 0.5°C
Release Kinetic Models and Mechanism: The data shown in table 7 revealed that Korsmeyer – Peppas model of release gives the best fitness of all models, whereas the mechanism of release was non-Fickian (anomalous) due to non-swellable liposomal sphere vesicles, i.e., the mechanism of release is mainly mediated by diffusion and erosion (0.43 < n < 0.85).

Weibull 3 model was the best for fitting the data obtained as shown in equation 18 [25]:
Weibull 3 Dissolution Model:
………….... (Eq. 18)
The release kinetic data were; Fmax=69.17%, a=3243942.813, b=0.749 and R2=0.9982. Therefore; the overall KTF release equation will be:
….. (Eq. 19)
CONCLUSIONS: The mass ratio of KTF solution to soybean phosphatidylcholine (SPC94), KTF/ SPC94 to 0.5 M lactose solution and lyophilized liposomal powder (LLP) to coarse lactose carrier (CLC) effects on preparing KTF nano-liposomes were studied. As KTF: SPC94 ratio increased, there will be an increment in the KTF liposomal encapsulation efficiency, whereas a higher lactose ratio has a significant-negative effect. As SPC94 concentration increase the liposomes particle size increase, whereas an optimal cryoprotectant concentration is essential in order to provide an adequate surface area for the adherence of the condensed liposomal bilayer. An optimum amount of lactose carrier is required for improving fine particles fraction and optimizing the in vitro deposition of liposomal dry powder.
Applying a desirability function method, the optimum parameters were: KTF: SPC94 of 0.045, KTF/ SPC94: 0.5 M lactose of 0.389 and LLP: CLC of 0.080. By employing response surface methodology, the development of optimum KTF nano-liposomal vesicles with a continued release were possible and pulmonary targeting via loading on lactose carrier can be fulfilled.