ABSTRACT: A new, precise, rapid, accurate RP-HPLC method was developed for the estimation of Decitabinein pharmaceutical dosage form. After optimization the good chromatographic separation was achieved by Isocratic mode with a mixture of Ammonium Acetate buffer of pH 4.5: Acetonitrile (985:15) v/v as the mobile phase withDevelosil Rp Aqueous-AR-5 (150 x 4.6 mm, 5 µm), column as stationary phase at flow rate of 1.5 mL/min and detection wavelength of 244 nm. The Retention time of decitabine was found to be 3.796 min. The linearity of this method was found in the concentration range of 50-150 µg/mL. The correlation coefficient R2value is found to be0.998. The LOD for this method was found to be 0.0003 µg/mL. The LOQ for this method was found to be 0.0009 µg/mL. This method was found to be good percentage recovery about 99.77 indicates that the proposed method is highly accurate. The specificity of the method shows good correlation between retention times of standard with the sample so, the method specifically determines the analyte in the sample without interference from excipients of formulation. The method was extensively validated according to ICH guidelines for Linearity, Range, Accuracy, Precision, specificity and Robustness.

INTRODUCTION: Decitabine 1 is chemically 4-amino-1-(2-deoxy-β-D-erythro-pentofuranosyl)-1, 3, 5-triazin-2(1H)-one and the structural formulais shown in Fig. 1. The molecular formula is C8H12N4O4 and molecular weight is 228.21g/mol. It is stable at room temperature, sparingly soluble in ethanol soluble in water and freely soluble in DMSO. Decitabine is believed to exert its antineoplastic2 effects after phosphorylation and direct incorporation into DNA and inhibition of DNA methyltransferase, causing hypomethylation of DNA and cellular differentiation or apoptosis. It useful in treatment of Myelodysplastic syndrome (MDS) and antineoplastic agent. From the literature survey, it was found that Decitabine was estimated by analytical methods such as few UV-Visible methods and high-performance liquid chromatographic 3 (HPLC) method. The present developed method was simple, precise, specific and accurate. 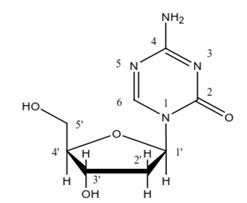 MATERIALS AND METHODS: For HPLC, Waters 2690 series model equipped with Auto sample, PDA (2998) detector 4, 5 with Empower 2 software was employed for the investigation. All the chemicals used in the investigation were of HPLC grade. The chromatographic analysis was performed on a Develosil Rp Aqueous-AR-5 column 6 (150 x 4.6 mm, 5µm). The mobile phase consists of Ammonium acetate buffer pH 7, 8, 9 of 4.5 and acetonitrile in the ratio of 985:15v/v. The optimized chromatographic conditions are summarized in Table 1.

Table 1: Optimized chromatographic conditions for the proposed method for Decitabine

The buffer was filtered through 0.45µm membrane filter paper to remove all fine particles.

Preparation of mobile phase: The mobile phase was prepared by mixing the Ammonium acetate buffer and acetonitrile in the ratio of 985:15. After the solution was filtered through 0.45µm membrane filter to remove all fine particles and degas.

Preparation of Standard solution: Weighed accurately about 100 mg of standard decitabine and transferred into a 100 mL volumetric flasks to this add 25 mL of DMSO. The volume was made up to mark with the DMSO. The concentration of Decitabine was found 1000 μg/ml.

Weigh a quantity of powder equivalent to 100 mg of decitabine in 100 mL volumetric flask and make up mark with DMSO. From above solution Pipette 1 mL of the clear solution in to 10 mL volumetric flask and make up volume with DMSO. The resulting solution is used for calibration graphs to give a final concentration within the range of linearity. The solution was analysed for the estimation of drug by proposed method.

Chromatographic condition: The mobile phase containing ammonium acetate buffer (pH 4.5) and acetonitrile in the ratio of 985:15 v/v was selected as the optimum composition of mobile phase, as this solvent system resolved for the component ideally. The flow rate 10, 11 was set to 1.5 ml/min and UV detection was carried out at 244 nm. The mobile phase and sample was degassed by filtered through 0.4 µm membrane filter paper. All determinations were performed at constant column temperature (10oC).

Preparation of Calibration curve and Analysis of Decitabine: Appropriate aliquots were pipetted out from the standard stock solution (1000 µg/ml) into a series of 10 ml volumetric flasks. The volume was made up to the mark with the mobile phase to get a set of solutions having the concentration, ranging from 50-150µg/ml of the drug. The solutions were injected using a 20µl fixed loop into the chromatographic system at the flow rate of 1.5 ml / min and the effluents were monitored at 244 nm, chromatograms were recorded. The decitabine was eluted at 3.796 min as shown in Fig. 2. 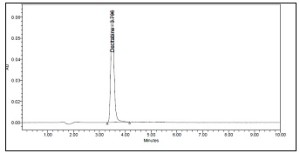 The calibration curve was constructed by plotting average peak area versus concentration and was presented in Fig. 3. 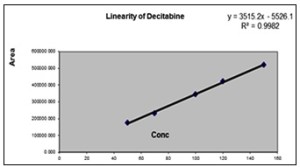 FIG. 3: CALIBRATION CURVE OF DECITABINE AT 244 nm BY RP−HPLC METHOD

TABLE 3: REGRESSION ANALYSIS OF THE CALIBRATION CURVE FOR THE PROPOSED METHOD FOR DECITABINE

A 20µl volume of each sample solution was injected into the sample injector of HPLC system and their chromatograms were recorded under the same chromatographic conditions as described above. The area of each peak 12 was determined at 244 nm and the amount of drug present in the sample was determined.

Method validation:The developed analytical method was subjected to validation 13, 14, 15 with respect to various parameters such as accuracy, precision, linearity and range, robustness, ruggedness, LOD and LOQ as per the ICH 16, 17 guidelines.

TABLE 4: SUMMARY OF VALIDATION PARAMETERS FOR THE FOR THE PROPOSED METHOD FOR DECITABINE (Robustness results for validations in flow rate ml/min)

RESULTS AND DISCUSSION: In this method, the conditions were optimized to obtain complete elution of decitabine. Mobile phase and flow rate selection was based on peak parameters (height, tailing factor and theoretical plates), run time, resolution. The system with ammonium acetate buffer (pH 4.5) and acetonitrile in the ratio of 985:15v/v. The run time was set at 5 min and the retention time for decitabine was found 3.796 min as shown in Fig. 2.

The regression equation was used to estimate the amount decitabine, either in formulations or in validation study (precision and accuracy).

Ruggedness of the proposed method was determined by analysis of sample by changes in different parameter like flow rate, and analyst using similar operational and environmental conditions.

The proposed method was validated in accordance with ICH parameters and applied for analysis of the same in marketed formulations.

CONCLUSION: A new precise, accurate, rapid method has been developed for the simultaneous estimation of Decitabine in pharmaceutical dosage form by RP-HPLC.

The optimum wavelength for the determination of Decitabine was selected at 244 nm. Various trials were performed with different mobile phases in different ratios, but Ammonium Acetate buffer pH 4.5: ACN (985:15) was selected as good peak symmetry. The Retention time of decitabine was found to be 3.796 min.

The different analytical performance parameters such as linearity, precision, accuracy, and specificity, LOD, LOQ were determined according to International Conference on Harmonization ICH Q2B guidelines. The calibration curves were obtained by plotting peak area versus the concentration over the range of 50-150 µg/mL. From linearity the correlation coefficient R2 value was found to be 0.998.

The proposed HPLC method was also validated 18, 19 for system suitability, system precision and method precision. The % RSD in the peak area of drug was found to be less than 2%. The number of theoretical plates was found to be more than 2000, which indicates efficient performance of the column.

Hence, the proposed method is highly sensitive, precise and accurate and it successfully applied for the quantification of API content in the commercial formulations of decitabine in Educational institutions and Quality control laboratories.

ACKNOWLEDGEMENT: We would like to thank Natco pharma Limited Hyderabad, India for providing reference sample of decitabine to facilitate this work.