ABSTRACT: A simple and rapid reverse-phase high-performance liquid chromatographic technique was developed and validated for the determination of Luliconazole in the presence of its excipients. Chromatographic elution was performed on a binary gradient HPLC equipped with PDA detector using a Luna-5µ C8(2) 100 Å column (250 × 4.6 mm, 5 µm) with orthophosphoric acid (0.1%) and methanol (20:80% w/v) as mobile phase at a flow rate of 1.2 mL/min. The method follows Beer-Lambert’s law over a concentration range 0.1-200 μg/mL (y = 53981x + 25076, R2 = 0.999). The LOD and LOQ were found to be 0.068 µg/mL and 0.206 µg/mL indicating the sensitivity of the method with the required precision and accuracy. The method proved to be specific as there was no interference from the commonly used excipients in a formulation like methylparaben and also in the presence of degradants when exposed to a variety of stress conditions (acidic, alkaline, oxidation, thermal, hydrolytic and photolytic degradations). It was observed that Luliconazole was more sensitive towards alkaline conditions, and hence the proposed method, validated as per ICH guidelines proved to be stability-indicating and can be successfully applied for the determination of Luliconazole in creams.

It is a broad-spectrum imidazole that is active against various fungi, including Tinea candida, Aspergillus, trichophyton and Epidermophyton is used for the treatment of interdigital tinea pedis, tinea cruris, and tinea corporis. Although the exact mechanism of action against dermatophytes is unknown, Luliconazole appears to inhibit ergosterol synthesis by inhibiting the enzyme lanosterol demethylase. Inhibition of this enzyme's activity by azoles results in decreased amounts of ergosterol, a constituent of fungal cell membranes, and a corresponding accumulation of lanosterol 2, 3. Luliconazole as a 1% topical cream is indicated for the treatment of athlete's foot, jock itch, and ringworm caused by dermatophytes such as Trichophyton rubrum, Microsporum gypseum and Epidermophyton floccosum 4, 5. 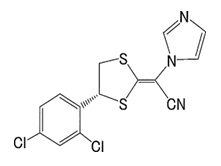 Preparation of Stock Solution and Working Standard: Stock solution (1000 μg/mL) was prepared by dissolving 25 mg of Luliconazole in methanol in a 25 mL volumetric flask. Working standard solutions were prepared from the stock solution with the mobile phase as diluent.

Preparation of Ortho Phosphoric Acid (0.1%): 1mL of orthophosphoric acid was taken and dissolved in 1000 mL HPLC water in a 1000 ml volumetric flask.

Preparation of Sample Solution (Luliconazole in Cream): For the analysis of Luliconazole in creams, 0.5gm of cream (1% w/w) was taken in a 50 mL volumetric flask, methanol was added in increments, the drug was dissolved by constant stirring and after complete dissolving of the cream base, remaining volume was made up with methanol and filtered.

Validation: The developed method was validated as per ICH (2005) validation12 parameters such as linearity, precision, accuracy, the limit of quantitation (LOQ), the limit of detection (LOD), specificity, and robustness.

Linearity: Linearity of the assay method was conducted by preparing a series of solutions (0.1–200 μg/mL) from the standard working solution, and each solution was injected into the HPLC system in triplicates. The average peak area of the chromatograms obtained was plotted against concentration to construct the calibration curve.

Accuracy: The accuracy of the assay method was performed by standard addition at three concentration levels (50, 100, and 150%). Standard solution (5, 10, 15 μg/mL) of Luliconazole was added to a pre-analyzed sample solution of cream, each solution was evaluated in triplicate, and the percentage recovery was calculated.

Robustness: Robustness study was performed by incorporating small changes in the method parameters such as wavelength (292 and 296 nm), the composition of mobile phase (75 and 85% of organic phase) and flow rate (1.1 and 1.3 mL/min). A standard and sample solution of Luliconazole (20 μg/mL) was injected in replicates under the altered chromatographic conditions, and the peak area along with system suitability parameters was monitored.

Specificity: The specificity of the method was established in the presence of excipients and degradation products. The interference of the commonly used additives in creams was determined by injecting a solution of methyl-paraben (10 µg/mL) along with the drug into the column. The blank, standard, sample, and specificity chromatograms obtained were analyzed.

Forced Degradation Studies: The stability 12, 13, indicating properties and specificity of the method were evaluated by performing forced degradation studies (ICH, 2003). The stress studies were conducted at an initial concentration of 100 μg/mL of Luliconazole.

Assay: The developed method was also applied for the determination of Luliconazole in marketed formulations. Lulifin® (cream) containing 1%w/w of Luliconazole was selected, and the sample solution was prepared as discussed above. From the filtrate, suitable aliquots were diluted with the mobile phase and analyzed using the calibration curve.

RESULTS AND DISCUSSION: A simple and rapid HPLC method has been developed and validated for the assay of Luliconazole in creams. Initially, various mobile phases were tried to achieve better resolution and separation conditions. The drug solution was analyzed using different conditions such as water: methanol (30:70 v/v, 1 mL/min.), water: methanol (20:80 v/v, 1.2 mL/min.) in which the peak shapes were not symmetrical and also did not satisfy the system suitability parameters. Then the mobile phase composition was changed to orthophosphoric acid (0.1 %): methanol (20: 80, v/v) where a peak was eluted at 3.59 ± 0.02 min. which was sharp without tailing (UV detection at 294 nm) and so these parameters were taken as the optimized chromatographic conditions. The representative chromatogram of the standard drug solution is shown in Fig. 2. The developed method was validated for system suitability, linearity, the limit of quantitation (LOQ), the limit of detection (LOD), precision, accuracy, selectivity, and robustness as per the ICH guidelines.

System Suitability: The system suitability test was performed to ensure that the complete testing system was suitable for the intended application. The parameters measured were peak area, retention time, tailing factor, capacity factor, and theoretical plates. In all measurements, the peak area varied less than 2.0%, and the average retention time was at 4.74 ± 0.21 min. The capacity factor was more than 2, theoretical plates were 6163 ± 150 (more than 2000), and the tailing factor was less than 1.2 for the Luliconazole peak. 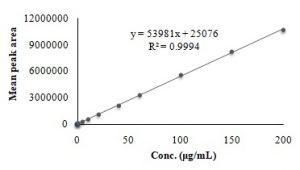 Precision: The repeatability of the method was studied in terms of intraday and interday precision in which the % RSD values calculated for the peak areas were obtained as 0.1-0.21 and 0.12-0.21, respectively (<2%). Table 3 indicates the results representing that the method is precise.

Robustness: Slight changes in flow rate, mobile phase composition, and wavelength were made, and they did not much affect the system suitability parameters like retention time, tailing factor, and theoretical plates, as given in Table 4.

Specificity: The method was tested for its specificity in the presence of methylparaben as an additive and it did not pose any interference as observed in the chromatogram given in Fig. 4. The methylparaben peak (3.004 min) was well resolved from the drug peak (3.542 min), indicating the specificity of the method.

FIG. 4: CHROMATOGRAM OF METHYLPARABEN AND LULICONAZOLE

Forced Degradation Studies: Luliconazole standard drug solutions were exposed to different stress conditions and the drug showed mild degradation in acidic (1.69%) and moderate degradations in oxidation (4.84%), thermal (9.69%), hydrolytic (7.85%) and photolytic (7.85%) stress conditions. The drug was found to be sensitive to alkaline stress conditions, as observed from the degradation behavior (22.27%) given in Table 5. The imidazole moiety present in the Luliconazole chemical structure may be responsible for the alkaline degradation for which the extra peak, which was completely resolved from the analyte peak might have eluted at 2.145 min. The typical blank and analyte chromatograms obtained during the assay of stressed samples are shown in Fig. 5A-F. The system suitability parameters for the Luliconazole peak in all the stressed conditions showed that the theoretical plates were more than 2000, and the tailing factor was less than 2.0 depicting the stability-indicating nature of the RP-HPLC method. The method also proved to be specific to Luliconazole in the presence of degradants. 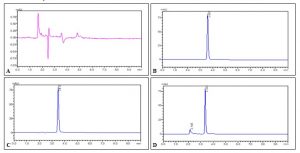 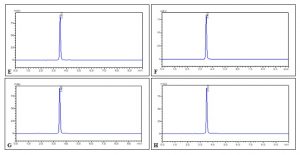 The method was applied for the quantification of Luliconazole in marketed creams, and the assay was obtained as 99.9 ± 1.17% w/w as stated against the label claim given in Table 6.

TABLE 6: ASSAY OF LULICONAZOLE IN CREAMS

CONCLUSION: A simple, rapid, sensitive, and reliable RP-HPLC method with good precision and accuracy was developed and validated for the analysis of Luliconazole. The proposed method was specific while estimating the commercial formulations without the interference of excipients and other additives. Also, the method was proved to be stability-indicating and hence can be used for the routine determination of Luliconazole in API and creams.

CONFLICTS OF INTEREST: The authors declare nil conflict of interest.