Levetiracetam is a new antiepileptic medication that is effective as adjunctive therapy in the treatment of partial onset seizures in adults and children 4 years of age and older with epilepsy. Levetiracetam is an antiepileptic drug available as a clear, colorless, grape-flavored liquid (100 mg/mL) for oral administration. It is the S-enantiomer of etiracetam, structurally similar to the prototypical nootropic drug piracetam. Levetiracetam shows great potential as a safe and effective agent for the treatment of neonatal seizures based on its efficacy and safety profile in other age groups, its mechanism of action is still not much known.

Results: During method validation, parameters such as precision, linearity, accuracy, limit of quantification and detection and specificity were evaluated, which remained within acceptable limits.

Many pharmaceutical products have to be analyzed for residual solvents at different stages of their development (raw materials, intermediate products and final product). Organic solvents such as Methanol, ethanol, Acetone, dichloromethane, Isopropyl alcohol, Acetonitrile, Methyl ethyl ketone, Ethyl acetate, Tetrahydrofuran, Cyclohexane, are frequently used in the pharmaceutical industry. The manufacturing of new active pharmaceutical ingredients (APIs) under Good manufacturing practices (GMP) conditions demands adequate control of quality of the different ingredients used in the synthesis. Organic residual solvents have therefore to be controlled during any GMP synthesis. Headspace gas chromatography (HSGC) is the most favored technique for the analysis of volatiles and semi volatile organics in solid, liquid, gas samples 3, 4, 5, 6, 7.

Apparatus and Chromatographic Condition: The analysis for the determination of residual solvents and its validation was performed on Agilent’s gas chromatograph equipped with headspace sampler and a flame ionization detector (FID). SPBTM- 624, Supelco, 60 m length, 0.32 mm internal diameter, and 1.8µm film thickness column was used for the validation. The final validated HSGC method for the separation of residual solvents used a flow rate of 1.5ml/min. Oven temperature was maintained at 40°C for 22 min, and then a linear thermal gradient of 30°C/min to 220°C was used with a final hold of 8 min. Total run time was 36.0 min. Nitrogen was used as a carrier gas at a constant flow rate of 1.5ml/min.

Method Validation: The method validation was done by evaluating specificity, limit of detection (LOD) and limit of quantitation (LOQ), linearity, accuracy, repeatability, and method precision of residual solvents as indicated in the ICH guideline Q2B 'Validation of Analytical Procedures: Methodology 15.

Specificity: Levetiracetam API sample was spiked with all solvents individually and each sample was chromatographed to examine interference, if any, of the residual solvents peak with each other.

Linearity: The linearity of the method was determined by making injection of each residual solvent over the range of limit of quantifications (LOQ) to 200% of the standard concentration as mentioned earlier.

System precision: Six vials of standard solution were prepared and chromatographed in the GC system.

Method precision: A single batch of Levetiracetam API was prepared six times and analyzed by the proposed method.

System Suitability: A system suitability criterion was taken to be the resolution between the critical pairs, Methyl Ethyl Ketone & Ethyl acetate. The system suitability was evaluated by injecting the standard solution on various days before starting the any exercise during validation study.

In the above column, the response was found to be comparatively lower and peak shapes were found to be unsatisfactory. Also, there was a problem in resolving the closely related peaks specially 2-methylpentane and dichloromethane. Therefore, SPBTM- 624, Supelco, 60 m length, 0.32 mm internal diameter, and 1.8µm film thickness proved to be the best column that could fulfill all the needs of the method, i.e., higher sensitivity, shorter runtime and higher resolution between the critical pairs.

Specificity: The relative retention time of the all-residual solvents indicated that they were well separated from each other.

Linearity: The FID detector response was shown to be linear over this range with correlation coefficients (R2) higher than 0.99 (Table 2, Figure 1). 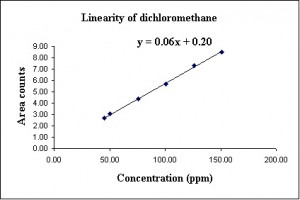 System precision: Results indicate an acceptable level of precision for the analytical system (Table 5). The % relative standard deviation (%RSD) of area obtained from six standard vials was calculated to show the system precision. An acceptance criterion for system precision was taken to be not more than (NMT) 8% for six vials. 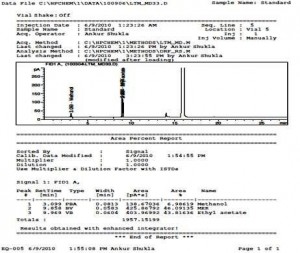 CONCLUSION: A single, rapid and highly selective HSGC method was developed and validated for the quantification of residual solvents present in Levetiracetam bulk drug through an understanding of the synthetic process, nature of solvents and nature of stationary phases of columns. The residual solvents methanol, ethanol, acetone, isopropyl alcohol, ethyl acetate, cyclohexane, methylethyl ketone, dichloromethane, acetonitrile, tetrahydrofuran and toluene were determined. The method was shown to be specific for Levetiracetam and was applied successfully to monitor and control these solvents on a manufacturing level. The method was found to be applicable for the routine analysis of the Levetiracetam in pharmaceutical firms.

ACKNOWLEDGEMENT: The author would like to thank Mr. R K Jaat (Gyan Vihar University, Jaipur, India) for his contribution in restructuring the article.