ABSTRACT: A simple, accurate, precise and sensitive reverse phase high performance liquid chromatography (RP-HPLC) method for the determination of cefixime trihydrate and its degraded products have been developed and validated. Drug was resolved on a C18 column (waters spherisorb 25 cm × 4.6 mm, 5µm), utilizing mobile phase of sodium dihydrogen phosphate monohydrate (0.1M aqueous) pH adjusted to 2.5 with diluted orthophospharic acid (10 % aqueous) and methanol in a ratio of 3:1 respectively. Mobile phase was delivered at the flow rate of 1.0 ml/min. Ultra violet detection was carried out at 254 nm. Separation was completed within 9.75 minutes. Calibration curve was linear with correlation coefficient (r2) = 0.9996 over a concentration range 10-50µg/ml. Recovery was between 98.84, 100.25 percentage. Method was found to be reproducible with relative standard deviation (RSD) for intra and interday precision of < 1.0 over the said concentration range. The method was successfully applied to the determination of the decomposed products of cefixime trihydrate, it can be very useful and an alternate to performing the stability studies.

INTRODUCTION: Cefixime is a semi synthetic, aminothiozolyl, broad spectrum third generation cephalosporin, active against gram positive and gram negative aerobic bacteria. Its Pharmacokinetic profile has been extensively studied in healthy volunteers as well as in patients.

Besides, its use in urinary tract infection, respiratory tract infection it has been documented efficacious in the treatment of gonorrhea 1 (Plourde, P.J. et al, 1992). It is used also to treat many different types of bacterial infections such as bronchitis, tonsillitis, ear infections, and skin infections. Cefixime is available in oral formulation.

Like ceftriaxone and cefotaxime, cefixime has enhanced antibacterial activity and increased stability against many of the β-lactamases 2 (Martindale, 2009).

The aim of the present work was to develop a relatively simple, sensitive, validated, reliable, and inexpensive HPLC method for the determination of cefixime trihydrate and its degraded products.

Dilution for Accuracy and Recovery Studies: To study the accuracy of the method and to check the interference from excipients, recovery studies were carried out by addition of standard drug solution to sample at 3 different levels (80%, 100%, and 120 %) of the test concentration. The first recovery study was conducted on the excipients mixture (placebo) prepared by adding accurately weighed amounts of cefixime trihydrate to the excipient mixture and calculating the percentage recovery in each case.

Dilution for Precision Studies: Precision of the method was checked by repeatability of intraday and interday assay. The intra- assay precision (repeatability) and accuracy were studied by analyzing repeatedly six replicate concentration of 100%  of cefixime trihydrate on one laboratory on the same day ,three different concentration levels (10, 20 and 30µg/ml). reading of a e and 3 replicate The interday precision (reproducibility) and accuracy were studied by analyzing the different concentration levels (10, 20, 30 and 40 µg/ml) of cefixime trihydrate (3x) over three  days and results were expressed as a Relative standard deviation percentage (RSD%)

Determination Limit of Detection (LOD) and Limit of Quantitation (LOQ): Limit of detection can be calculated by using the following formula:

Limit of quantitation can be calculated base on standard deviation of the response and the slope.

Where σ = Standard deviation of the response; S = Slope of the calibration curve

System Suitability Testing: System suitability testing is used to verify that the resolution and reproducibility of the system are adequate for the analysis to be performed. Parameters such as theoretical plates; tailing factors; resolution and reproducibility (% RSD for retention time and for area of six replicates) are determined and compared against the specifications.

RESULTS AND DISCUSSION: Various mobile phases were used containing acetonitrile, methanol, sodium and potassium phosphate buffers. Literature revealed that, tetra butyl ammonium hydroxide solution mix with acetontrile with a ratio of 3:1 or 2:1 respectively were preferred as it is used as mobile phase used for resolved cefixime trihydrate.

The use of 0.1 M sodium dihydrogen phosphate monohydrate pH 2.5 mixes with methanol with a ratio of 3:1 respectively as mobile phase revealed good resolution and peak shape for cefixime trihydrate. On the other hand UV absorption spectra of cefixime in the range 200-400 nm showed maximum absorbance at 254 nm (Figure 1). Therefore, the above mentioned parameter was selected as detection wavelength. Flow rate of 1.0 ml/min provided run time of about 9.75 minutes and was used as flow rate. 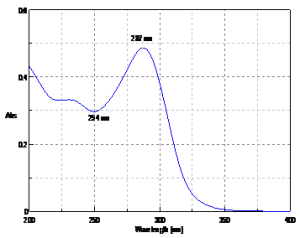 C18 is common stationary phase suitable for many pharmaceuticals and was found to be suitable in this case (Table 1).

TABLE 3:  STANDARD CALIBRATION CURVE FOR THE ANALYSIS OF CEFIXIME TRIHYDRATE BY HPLC (r = 0.9996) 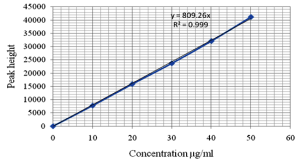 The method was validated for various parameters as per ICH guidelines'. The results of method validation are shown in table 4.

As per ICH guidelines, for assay procedure of active substance or finished product, range should be 80-120% of the test concentration. Results of recovery studies ranged from 98.84-100.25 are shown in table 5, indicating very good reproducibility of these methods. The excipients used in the mixture did not interfere in the analysis.

Robustness studies were carried out after change of flow rate, wavelength of detection and mobile phase composition. It was observed that the small changes in this parameters, did not lead to changes of retention times of peak of interest.

CONCLUSION: The method described enables the quantification of cefixime trihydrate and its degraded products. The validation data demonstrate good precision and accuracy, which prove the reliability of proposed method. Hence, this HPLC method can be used routinely for quantitative estimation and apply as stability indication method.

It can be concluded that the proposed methods are fully validated. They were found to be simple, sensitive, accurate, precise, reproducible, relatively inexpensive, and they give an acceptable recovery of the analyte. The method was specific to drug and also selective to degradation products.

Department of Chemistry, Collage of Science, Sudan University of Science and Technology