A High Performance Liquid Chromatographic method was developed for determination of Diclofenac Potassium in in-vivo study during bioavailability study. The chromatographic separation was conducted on Shimadzu Prominence LC 20 connected with PDA detector; using mixed column ODS/Cyano; ACE, (100 x 4.6 mm, 5 µm). The mobile phase was isocratic consisted of Methanol: 50 mM potassium dihydrogen phosphate buffer, in ratio of (50 : 50 v/v) and was delivered to the system at a flow rate of 1.5 ml/min, with an injection volume of 20 µl and the detection wavelength (λ max) was 280 nm. Diazepam was used as internal standard. All assays were performed at ambient conditions. The calibration curve of Diclofenac Potassium in plasma was linear with correlation coefficient (r2) = 0.9996; over a concentration range of 0.25 - 3 ug/ml. The retention times for Diclofenac Potassium and the internal standard (Diazepam) were found to be 5.95 and 7.90 minutes, respectively. The mean recovery was found to be 90.57%.The relative standard deviation (RSD) was found to be < 2. The proposed method was validated and successfully applied to the determination of Diclofenac Potassium in human plasma for bioavailability studies.

Analytical procedure for determination of Diclofenac Potassium in plasma:

1 ml of internal standard working solution and 1 ml methanol were added. The mixture was vortexed for 2 minutes and centrifuged at 6000 rpm for 30 minutes. The upper layer was transferred to another tube and filtered through 0.45 µm syringe filter. A 20 µl volume of the supernatant was injected onto the HPLC column. Concentrations of Diclofenac Potassium in unknown samples were calculated with reference to the prepared calibration curve. Retention time of Diclofenac Potassium was 5.95 minutes.

The calibration curve was obtained by plotting chromatographic peak area ratios (Diclofenac Potassium/Diazepam) against the corresponding nominal Diclofenac Potassium concentration added. Samples were prepared and injected on the same day.

The retention times of Diclofenac Potassium and the internal standard (Diazepam) are approximately 5.95 and 7.9, respectively. Both peaks were sharp with good baseline resolution and minimal tailing, thus facilitating accurate measurements of the peak area ratios. No interferences by the metabolites or normal constituents of plasma were observed. The overall chromatographic time is 10 minutes. 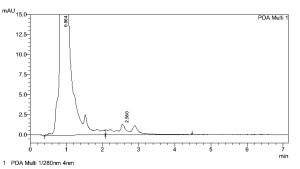 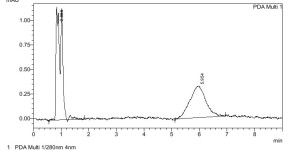 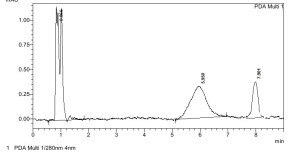 Linear regression analysis of the standard calibration plot for human plasma was y = 0.1615x – 0.0225, where y and x are the peak area ratio and Diclofenac Potassium concentration, respectively. The correlation coefficient of the line was (R2 = 0.9996). The data is represented by table 2 and figure 6.

TABLE 1: RELATIONSHIP BETWEEN THE CONCENTRATION OF DICLOFENAC POTASSIUM AND THE MEAN RELATIVE PEAK AREA USING HPLC 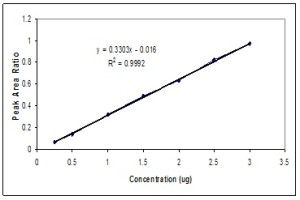 TABLE 2: RELATIONSHIP BETWEEN THE CONCENTRATION OF DICLOFENAC POTASSIUM IN HUMAN PLASMA AND THE MEAN RELATIVE PEAK AREA USING HPLC 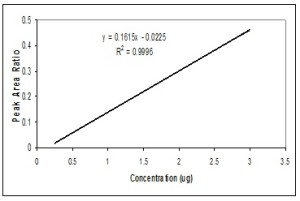 TABLE 3: ANALYTICAL PRECISION FOR THE ANALYSIS OF DICLOFENAC POTASSIUM PERFORMED ON 3 SETS OF STANDARD CURVES OF THE SAME DAY

Inter-day (Day to Day) Reproducibility: Table 4 reveals the results of the inter-day evaluations. The results show that the correlation coefficients mean was higher than 0.99 and the coefficient of variance of the slope of the three trend lines was less than 2%. The analysis of variance of the data showed no significant difference in the slopes of the three standard plots. The results thus confirmed excellent linearity of the calibration lines and high reproducibility of the assay.

TABLE 4: INTRA-DAY REPRODUCIBILITY FOR THE STANDARD PLOT OF DICLOFENAC POTASSIUM IN PLASMA

ii-        Mean of 3 determinations at each drug concentration

TABLE 5: THE PEAK AREA RATIO OF DICLOFENAC POTASSIUM TO THE INTERNAL STANDARD OF THREE DIFFERENT CONCENTRATIONS, (FRESH AND STORED AT -20°C)

Extraction Recovery: Data of the extraction recovery of Diclofenac Potassium from plasma samples fortified with the drug in the same concentrations of the drug used in the calibration curve in human plasma are shown in table 6. The extraction recovery ranged from (82.69 – 96.12%) with a mean percent recovery 90.576% and the average coefficient of variation was 0.717%. The previous outcomes revealed the suitability of the method for the determination of Diclofenac Potassium in the plasma samples.

TABLE 6: WITHIN DAY ACCURACY FOR DETERMINATION OF DICLOFENAC POTASSIUM IN PLASMA

CONCLUSIONS: The developed method showed adequate accuracy, precision, sensitivity and reproducibility. From which, it can be concluded that the proposed method can be used for in-vivo analysis of Diclofenac Potassium in plasma.

ACKNOWLEDGEMENTS: The authors are highly thankful to Mepaco-Medifood Pharmaceutical Company for providing all the facilities to carry out this work. Also, we appreciate all the help from our fellow colleges in the research and development department, by which we would not have achieved our work.