ABSTRACT: A simple, rapid, and sensitive high-performance liquid chromatographic method with UV detection has been developed and validated according to the ICH guidelines for the quantization of Cefixime (CFXM) and Ofloxacin (OFLO) in tablet preparation. Chromatographic separation was carried out in a Agilent Zorbax Eclipse XDB-C18 column (150 mm × 4.6 mm; 5 μm particle size) of Agilent Technologies with simple mobile phase composition of 25 mM KH2PO4 in water (pH 4.63, maintained by dil Phosphoric acid) and Methanol (65:35, v/v) at a flow rate of 0.5 ml min-1 with injection Volume of 20 µl where detector was set at 288 nm with a total run time of 10 mins. The method was linear over the concentration range of 20-100, μg ml-1 for both of CFXM and OFLO with a correlation coefficient of 0.999 and 0.999 respectively. Limit of quantifications (LOQ) of 5.53, 5.24 and limit of detections (LOD) 1.82, 1.73 μg ml-1 for CFXM and OFLO respectively. Accuracy and precision values of both within-run and between-run obtained from six different sets of three quality control (QC) samples analyzed in separate occasions for both the analytes ranged from 98.08% to 99.98% and 0.51% to 0.98%, respectively. Extraction recovery of analytes from 97.35% to 99.21%. The developed and validated method was successfully applied to quantitative determination of CFXM and OFLO in pharmaceutical formulation.

It was not hydrolyzed by the common plasmid or by chromosomal β-lactamases which inactivate the oral penicillins and cephalosporins and thus cefixime is useful to treat some of the most difficult respiratory infec- tions, gonorrhoea, otitis media, pharyngitis and urinary tract infections.

It has been reported that the amino- thiazole ring is responsible for both excellent activity and oral absorption and in particular amino group in the thiazole ring is essential for the potential antibacterial activity 3, 4.

Ofloxacin [9-fluoro-2, 3-dihydro-3-methyl-10(4-methyl-1-piperazinyl) 7- oxo-7H-pyrido [1, 2, 3de]-1, 4- benzoxazine- 6-carboxylic acid] Fig. 21 is a synthetic fluoroquinolone  derivative,  which  has  demonstrated broad  spectrum  activity  against  many  pathogenic gram-negative and gram-positive bacteria. The bactericidal action of ofloxacin results from interference with enzyme DNA gyrase which is needed for the synthesis of bacterial DNA 5, 6.

Ofloxacin is used to treat pneumonia and bronchitis caused by influenza, Streptococcus pneumonia, skin infections caused by Staphylococcus aureus and Streptococcus pyogenes, sexually transmitted diseases such as gonorrhoea and chlamydia, urinary tract and prostate infections caused by Escherchiae coli            and used as an alternative treatment to ciprofloxacin for anthrax 7. Tablet formulation containing cefixime and ofloxacin each 200 mg is commercially available in Indian market, where Ofloxacin prevents nucleic acid synthesis and Cefexime Inhibits cell wall synthesis and this combination acts synergistically in bacterial infection.

Literature survey reveals that there are only few HPLC 8, 9, 10 and Spectroctrophotometric 11 methods available for the determination of both drugs, simultaneously. Reported UV method has used a specific mode that is only available in the sophisticated instruments.

The aim of the present study was to develop a simple, sensitive, accurate, versatile, and fast HPLC method for the simultaneous estimation of Cefixime and Ofloxacin in pharmaceutical tablet dosage form. The proposed methods were validated in compliance with the ICH guidelines 12 and were successfully applied for determination of Cefixime and Ofloxacin in their pharmaceutical formulations. 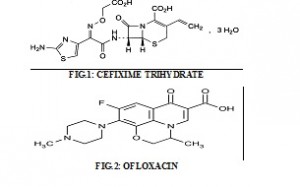 Samples are procured from pharmaceutical industry and they are considered as Sample I and Sample II respectively and the samples are tablet formulations.

Preparation of stock and working solutions:

25.5 mg of CFXM and 24.9 mg of OFLO taken in a 25 ml volumetric flask and dissolving in Methanol to obtain concentration of 1020µg/ml and 996 µg/ml respectively. The stock solution stored in amber colored labeled volumetric flask at 8 0C.

193.4 mg of sample diluted to 50.0 ml with methanol and mixed properly. Samples were further diluted by mobile phase which have final concentration of 80.13 µg ml-1 of CFXM and OFLO and then injected into the HPLC system.

The proposed methods were validated in compliance with the ICH guidelines and were successfully applied for determination of CFXM & OFLO in their pharmaceutical formulations.

This method was validated to meet the acceptance criteria with the ICH guidelines of method validation. 11

Selectivity of the method was determined by analyzing blank (mobile phase), to demonstrate the lack of chromatographic interference at the retention time of the analytes.

Limit of detection (LOD), Limit of quantitation (LOQ) and Linearity:

Limit of detection (LOD), Limit of quantitation (LOQ) was determined by the following equation 3.3xσ/S and 10xσ/S, where as σ = standard deviation of the response and S = slope of the calibration curve. Calibration curves were acquired by plotting the peak-area of the analytes against the nominal concentration of calibration standards. Analytes concentration of different CC and QC samples were prepared as mentioned above.

Accuracy of an analytical procedure is the closeness of agreement between accepted conventional true values (reference values) and the values found. The accuracy of the proposed methods was tested by the determination of CFXM and OFLO at different concentration levels within the linear range of each compound.

Recoveries of CFXM and OFLO were determined in the addition standard (40, 60, 80 µg ml-1) by comparing the experimental and true values.

During  optimizing  the  method  two  organic  solvents (methanol,  acetonitrile)  were  tested.  The chromatographic conditions were also optimized by using different buffers like phosphate, acetate, citrate for mobile phase preparation. After a series of screening experiments, it was concluded that phosphate buffer gave better peak shapes than their acetate, citrate counter parts. The resolution of chromatogram obtained with methanol is better than acetonitrile. The cost of acetonitrile also favoured to choose methanol as solvent for further studies.

The retention times of Cefixime and Ofloxacin was about 2.68 min and 6.43 min respectively. The total run time is 10 min is taken for the analysis. A typical overlay spectrophotometric examination (Fig. 3) of both ingredients in mobile phase shows the maximum absorbance at 288 nm hence the wave length fixed at 288 nm. 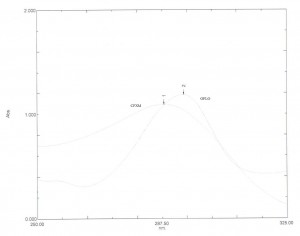 The method was found to selective as no significant interfering peak are observed at the retention times of CFXM and OFLO which were about 2.68 min and 6.43 min respectively. Total chromatographic run time was 10.0 min. Figure.4 and 5 shows the representative chromatograms of blank spiked with analytes.

Limit of detection (LOD), Limit of quantitation (LOQ) and Linearity:

The accuracy and precision of the proposed methods were tested by the determination of CFXM and OFLO at different concentration levels within the linear range of each compound. The low SD (< 1) of six determinations indicated the high accuracy and precision of the proposed method. Collective results are shown in Tables 1 and 2.

The inter- and intra-day determination of CFXM and OFLO over 3 consecutive days by the same analyst using the same instrument is shown in Tables 1 and 2. The low RSD (< 2%) reflects the ruggedness of the methods.

TABLE 1: ASSESSMENT OF ACCURACY AND PRECISION OF CEFIXIME.

TABLE 2: ASSESSMENT OF ACCURACY AND PRECISION OF OFLOXACIN.

Extraction recovery: Recovery results were found to be satisfactory as these were consistent, precise and reproducible are summarized in Table 3.

This newly developed method was applied to determine the CFXM and OFLO in pharmaceutical tablet formulation. Result ware summarized in Table 4.

TABLE 4: ESTIMATION OF CEFIXIME AND OFLOXACIN IN DIFFERENT FORMULATION

CONCLUSION: Here, we have developed and validated a HPLC-UV method that has significant advantages over the previously published method as it provides simple mobile phase composition for chromatographic separation, shorter run time for analysis, simple sample preparation as well as improved sensitivity. Therefore, this new method leads to a simple, feasible, cost effective, rapid method with high degree of accuracy and specificity to quantify simultaneously CFXM and OFLO in pharmaceutical formulations with HPLC-UV. It will be extremely helpful for successfully analyzing the CFXM and OFLO in various pharmaceutical formulations.

ACKNOWLEDGEMENT: The authors are thankful to The Director, Central Drugs Laboratory (CDL), Govt. of India, Kolkata.