ABSTRACT: A direct chiral separation method development was carried out for sitagliptin and its (S)-enantiomer on ten diverse chiral stationary phases. Chiral stationary phases, which were tested include, R, R Whelk-O1 column, macrocyclic glycopeptides namely, Chirobiotic R (Ristocetin A), Chirobiotic V (Vancomycin), Chirobiotic T (Teicoplanin), Chirobiotic TAG (Teicoplanin aglycone), OJ-H, OJ-RH belonging to tris (4-methylbenzoate) of cellulose. Chiral selectivity was observed on polysaccharide based CSP columns namely Chiralpak IA-3, Chiralpak IC-3 belonging to tris-(3,5-dimethylphenyl carbamate) of amylose, tris-(3,5-dichlorophenyl carbamate) of cellulose respectively and OD-H (tris-3,5-dimethylphenylcarbamate) of cellulose. Better enantioselective separation has been achieved on cellulose tris-(3,5-dichlorophenyl carbamate) column (Chiralpak IC-3), using IPA and n-hexane as mobile phase, both containing 0.05% ethylene diamine and at 0.5 mL/min flow rate. Detection was carried out at 266nm using PDA detector and column maintained at 35ºC. The method was validated for precision, accuracy, linearity and robustness. The advantages of the method are rapid equilibration and less solvent consumption due to short column length. Efficient enantio separation (Resolution 3.38) is due to small particle size of 3 μm. Therefore this method is suitable for chiral purity determination of sitagliptin and its (S)-enantiomer

INTRODUCTION:Sitagliptin belongs to dipeptidyl peptidase-4 (DPP-4) inhibitor class, which is in use as an oral antihyperglycemic drug 1. DPP-4 enzyme breaks down the incretins GLP-1 and GIP, the gastrointestinal hormones released in response to a meal

Sitagliptin works to competitively inhibit the enzyme DPP-4, preventing GLP-1 and GIP inactivation; thereby they increase the secretion of insulin and suppress the release of glucagon by the pancreas.

This drives blood glucose levels towards normal 2, 3. This drug is used either alone or in combination with other oral antihyperglycemic agents for the treatment of type 2 diabetes mellitus. Figure 1 shows the structure of (R)-sitagliptin.

Sitagliptin, the active substance contains a chiral centre and is used as a single (R)-enantiomer for therapeutic purpose, therefore other (S)-enantiomer is regarded as an impurity. High performance liquid chromatography (HPLC) coupled with various detection techniques is widely used for the qualitative and quantitative analysis in separation science. There have been analytical and bio-analytical methods reported for the determination of sitagliptin alone using HPLC 4, LC-MS/MS 5, HTLC-MS/MS 6 and in combination with other antidiabetic drugs using HPLC/Q-TOF MS 7.

Sitagliptin analysis also has been reported with its degradation product and metformin using HPLC 8, with its N-acetyl impurity, metformin and metformin related impurities using UPLC 9. So far there are only two published direct enantiomeric separation methods using AD-H column 10, an OD-RH column 11 and an indirect method 12.

We have developed and validated a chiral separation method which is superior in terms of efficiency and column ruggedness as the chiral selector is immobilized.  The column we have used belongs to latest generation polysaccharide based chiral chemistry technology. As the particle size of this stationary phase is 3 µm, column efficiency has increased multiple folds leading to reduction in column length which in turn reduces the mobile phase consumption.   In this case a resolution of 3.38 is obtained with 0.5 mL/min flow within a reasonable runtime.

Chemicals and Materials: Sitagliptin was isolated from Januvia™ tablets obtained from local pharmacy. Sitagliptin was racemized following a published procedure and has been characterized using NMR and mass spectroscopy, in-house.

The flow rate was adjusted to 0.5 mL/min, the UV detection wavelength was 266 nm and the column temperature was set to 35ºC. A sample volume of 10 µL was injected from each vial throughout the validation process. The enantiomeric separation chromatogram obtained with optimized conditions for racemic sitagliptin is given in Figure 2. Other chiral stationary phases mentioned in section 2.2 were used to explore chiral selectivity with various mobile phases compatible to the respective CSP. 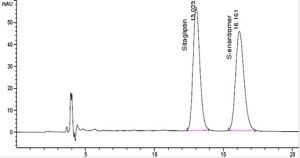 Validation of the method: HPLC method was validated according to ICH guideline 13 for linearity, precision, accuracy and robustness. LOD and LOQ were determined at signal to noise ratio of 3 and 10, respectively for (S)-enantiomer. Further, LOQ concentration was confirmed by six replicate injections and measuring their area %RSD.  Linearity of detector response was evaluated for six different concentrations starting with LOQ (1, 2, 4, 6, 8 and 10 µg/mL). These solutions were prepared by serial dilution of stock solution of (S)-enantiomer. Solution of each concentration was prepared in triplicate by serial dilution from stock solution and analyzed in six replicates for three consecutive days.

Linearity plot was established from concentrations and their respective mean peak areas. Correlation coefficient and y-intercept were calculated from the linearity plot.

The precision was determined by calculating %RSD of area and retention time of six replicates of 0.5% spiked (S)-enantiomer in 1 mg/mL solution of sitagliptin analyzed for three consecutive days.

The percent recoveries of (S)-enantiomer were calculated from the slope and y-intercept of the linearity plot. The method robustness was evaluated by deliberately varying experimental condition one at each time and monitored the resolution between sitagliptin and (S)-enantiomer.

Based on the trials it was observed that normal phase mode with basic additives was more favorable for separation compared to polar organic mode. Though reverse phase mode could provide chiral selectivity, these separations could not be optimized further. Among normal phase solvents, good selectivity was observed with n-hexane or heptane in combination with alcohol (ethanol, IPA). Differential selectivity was observed for basic additives (DEA, EDA) and also for alcohols (ethanol, IPA) on Chiralpak-IA3 and IC3 columns.

Validation results of the method: The Validation results are summarized in Table 2. Limit of detection and limit of quantification for (S)-enantiomer were found to be 0.1 µg/mL and 1 µg/mL, respectively. In the linearity study, excellent correlation (r2=0.9999) observed between peak area and corresponding analyte concentration ranging from 1 µg/mL to 10 µg/mL.

Method precision percent RSD for area and RT were below 1.2 indicating good repeatability of results. Recovery study results are given in Table 3. The results from robustness study found to be within the satisfactory limits (Table 4).

CONCLUSIONS: Simple, precise, selective and rugged chiral separation method was developed and thoroughly validated on immobilized polysaccharide column. The diversity of mobile phases that can be used on immobilized chiral columns offered flexibility during method development.  Based on our experience on extensive chiral separation method developments, we could conclude that immobilized chiral stationary phase columns with 3 µm particles offer excellent column life apart from being rugged in usage and result in saving of HPLC solvents compared to coated columns. This method is suitable for the quantitative estimation of (S)-enantiomer as an impurity in sitagliptin drug substance or formulation.

ACKNOWLEDGEMENTS: Authors would like to thank Dr. Rashmi Barbhaiya, Dr. Kasim Mookhtiar and Dr. Debnath Bhuniya for permitting to carry out this research work.