ABSTRACT: A LC-MS method was developed and validated for determination of ergocalciferol in human plasma. n-hexane was used as extraction solvent while kinetex C18 50*2.1 mm, 1.7µm was used as analytical column for chromatographic separation. Mobile phase was acetonitrile: 0.1% formic acid in methanol (90:10). Turbo ion spray with positive polarity was used as an interface with API QTRAP 5500 LC/MS/MS system. The calibration range was validated for 2.03 ng/mL to 150.69 ng/mL. Limit of quantification was 2.03 ng/mL. The recovery of Analyte was 97.04% to 99.27%. Labeled erythromycin was used as an internal standard for this method. Inter-batch and intra-batch accuracy and precision were calculated to check method’s performance. Stability was established for all anticipated working conditions for analyte as well as internal standard. Apart from stability experiments, other experiments were also performed to simulate the conditions of subject sample analysis. This method was applied successfully on bioequivalence study to evaluate pharmacokinetic parameters.

INTRODUCTION: Vitamin D is a fat-soluble vitamin that helps the body absorb calcium and maintain proper levels of calcium and phosphorus in the blood. vitamin D exists naturally in two major forms: vitamin D2 (Ergocalciferol) and vitamin D3 (Cholecalciferol) Fig. 1. Vitamin D2 is derived from plant and fungal sources. Vitamin D3 is derived from animal sources and is produced in skin exposed to Ultra - Violet (UV) radiation from the sun. In the body, vitamin D is metabolized to 25-hydroxy-vitamin D (25-OH-D) in the liver and subsequently to biologically active 1, 25- dihydroxy-vitamin D (1, 25(OH)2D) in the kidneys 1.

Vitamin D deficiency is recognized as one of the most common mild chronic medical conditions in the world 2. Vitamin D is either produced in skin (under influence of UV light) or taken up from nourishment. Deficiency of this vitamin has been associated to increased mortality in general population 3 and with several untoward outcomes as myocardial infarction 4, cardiac failure 5, stroke 6, diabetes mellitus, infections and inflammatory and autoimmune conditions 7, 8, 9.

Vitamin D regulates the calcium and phosphorus levels in the blood by promoting their absorption from food in the intestines, and by promoting re-absorption of calcium in the kidneys, which enables normal mineralization of bone. It is also necessary for bone growth and bone remodeling. The clinical relevance and immense market potential of ergocalciferol requires a developed and validated bioanalytical method which could be applied for the bioequivalence study of various formulations. Some of the previous analytical researches performed on this molecule for quantification 10 - 24. F. Ortiz Boyer et al., (1999) determined vitamin D2, D3, K1 and K3 and some hydroxyl metabolites of vitamin D3 in Plasma using a semi-automatic procedure for continuous clean up coupled online with Liquid Chromatography-UV Detection. They used an aminopropyl silica pre-concentration mini-column inserted in sample loop for sample clean up 10. Robert K. Lark et al., (2001) studied diminished and erratic absorption of ergocalciferol in adult Cystic Fibrosis patients.

In this method he measured vitamin D2 by using direct Ultraviolet quantitation after separation by HPLC while concentration of 25-Hydroxyvitamin D was measured with a commercially available assay kit 11. Amy K. Saenger et al., (2006) studied quantification of serum 25-Hydroxy vitamin D2 and D3 using HPLC-Tandem Mass Spectrometry and Examination of Reference Intervals for diagnosis of vitamin D Deficiency. The range of quantitation was 1 ng/mL to 100 ng/mL in serum. But in this method significant ion suppression was observed 12.

Ahmet C. Goren, Gokhan Bilsel, Mine Bilsel (2007) did simultaneous determination of 25-OH-vitamin D2 and D3 in human serum by LC/MS/MS. In this method, linearity of method was assayed by analyzing five point linear plot in range of 10-500 µg/L which is very high. And validity of this method was not verified on Subject sample analysis 13. Allen Zhang, Robert Kane, Francois Espourteille (2008) from Thermo Fisher Scientific developed a method for analysis of 25-Hydroxy vitamin D3 and 25-Hydroxy vitamin D2 using Turbo Flow Technology. Turbo Flow technology reduces matrix Effect and allow user to directly inject biological fluids into the LC-MS/MS system. But in this method sensitivity level was high 14.

M. P. George (2009) from Agilent Technologies developed a method for rapid analysis of vitamin D in serum using Triple Quadrupole LC/MS. Solid Phase extraction method was used to minimize interferences and ion suppression and to enable automation. In this case linearity of quantification was 5-100 ng/mL 15. 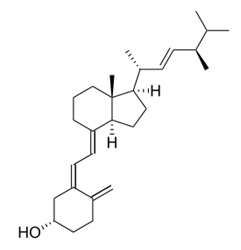 Chemicals and Reagents:  Ergocalciferol (molecular weight 396.65; 99.69% w/w) and ergocalciferol D6 (molecular weight 402.65, 100 %) were purchased from Splendid lab and Vivan Life Sciences respectively. K3 EDTA human plasma was procured from Pooja Blood Bank. Other laboratory reagents and chemicals were purchased from Rankem. All chemicals and reagents were used of GR or higher grade.

Instrumentation and Analytical Conditions: A Liquid Chromatography system was used (Nexera X2 from Shimadzu Co., Kyoto, Japan) in this method with analytical column having core shell technology (Kinetex C18, 50*2.1mm, 1.7µm from Phenomenex). Analyet and Internal standard were ionized and detected with help of triple quadrupole API 5500 LC/MS/MS from AB SCIEX (Toronto, Canada). Ionization of analyte and internal standard were done by using turbo ion spray which was operating in positive ionization mode. Multiple reactions monitoring method was used for quantitation of analyte. Precursor ion/daughter ion of ergocalciferol and ergocalciferol D4 were 572.1/298.0 and 578.1/298.1. Acquisition and quantitation was done using Analyst software (version 1.6.1).

Solutions and Samples: 2 mg of working standard was dissolved in 2 mL of methanol to prepare Ergocalciferol (1 mg/mL) and Ergocalciferol D6 (1mg/mL) Stock solutions.

QC samples at levels of 6.10 ng/mL, 30.19 ng/mL, 74.55 ng/mL and 135.55 ng/mL were prepared. All these samples were prepared by bulk spiking and distributed in pre-labelled tubes. All these tubes of calibration curve standards and quality control samples were stored in deep freezer at -20 °C (± 5 °C). During experiment activity 250 μL of sample was pipette out into pre-labelled tubes from these bulk spiked samples. And further processing activity was performed for method validation.

Preparation of Mobile Phase: Mixture of Acetonitrile and 0.1 % formic acid (90:20 v/v) was used as mobile phase for pump A and 0.1% Formic Acid in methanol in Pump B. This combination of solvents was run in a gradient program as given in Table 1.

Sample Preparation: For sample preparation, eight calibration curve standards and 6 sets of quality control samples were retrieved from deep freezer. Samples were thawed unassisted at room temperature. 250 µL of sample is pipette out into pre-labelled tubes. 50 µL of ergocalciferol D4 was added in these tubes except blank samples, vortexed for 30 sec. n-hexane was used as an extraction solvent so 3 mL of n-hexane was added I each sample and extraction was performed on extractor at 40 rpm for 10 min. Samples were centrifuged at 4500 rpm, 4 °C temperature for 7 min. 2.4 mL of supernatant was separated out in clean pre-labelled tube. This supernatant was evaporated at 40 °C under stream of nitrogen. 75µL of PTAD solution (4-phenyl-1, 2, 4-triazoline-3, 5-Dione) (0.75mg/mL) is added in each dried tube and vortexed for 30 sec. 175 µL of reconstitution solution was added in all samples and vortexed for 30 sec and transferred in pre-labelled autosampler vials.

Selectivity and Sensitivity: Response of analyte in blank sample was compared with response in LLOQ sample to check method’s selectivity. For this experiment six blank plasma, one haemolized and one lipemic plasma lots were taken while six LLOQ samples were analysed to check sensitivity of method.

Matrix Effect: This experiment was performed to evaluate inherent variability of matrix for analyte and internal standard. For matrix effect, 06 samples each at concentration of LQC and HQC level were prepared from 6 different plasma lots (Each lot was separated in two aliquots for LQC and HQC).

Recovery: Recovery was evaluated at three levels of quality control samples i.e., LQC, MQC and HQC. Six blank plasma samples were processed and were reconstituted after drying with aqueous solutions of LQC, MQC and HQC. Response of these samples was compared with extracted samples. Response of internal standard was compared in the same way for recovery evaluation of internal standard.

Effect of Concomitant Medication: The effect of potential concomitant drugs i.e. ibuprofen, caffeine, paracetamol and diclofenac, ranitidine on ergocalciferol analysis was performed by spiking mixture of concomitant medication drugs at their approximate Cmax concentration in the LQC and HQC sample in six replicates.

Guidance was taken from USFDA guidelines for Exclusion criteria (i.e., allergy to Ergocalciferol, alcoholism, psychosis, smoking, diabetes or any disease which could compromise the haemopoietic, gastrointestinal, renal, hepatic, cardiovascular, and respiratory or central nervous systems. Institutional Ethics Committee (IEC) approved clinical protocol for study design. Aims and risks of study were told to subjects and they provide consent in writing for information.

18-45 years of volunteers were enrolled in study which were having body mass index (18.5 - 30.0 kg/height2) and their physical examination was done with ECG and pathological tests to confirm any abnormality. Blood Samples of both periods were collected in vacuutainers having K3EDTA as anticoagulant. These blood samples were centrifuged as per clinical protocol to obtain plasma samples. These plasma samples were stored at -20 ºC in Deep freezers immediately. Samples from subjects who had completed all periods were taken for analysis.

Chromatographic Conditions: Kinetex C18   has shown good chromatographic resolution and sensitivity because of core shell technology. Gradient program was used to isolate peak of interest with other endogenous impurities and metabolic products. Flow rate of pump was from 0.35ml/min to 1.00 mL/min with gradient program and autosampler temperature was set at 10 ± 1 ºC.

Selectivity and matrix effect: Analyte and Internal Standard were found free of endogenous interference in all plasma lots including haemolized or lipemic plasma. Representative chromatograms of a blank sample, LLOQ sample (2.03 ng/mL) and ULOQ sample are given in Fig. 2, Fig. 3, Fig. 4 respectively. The variability of matrix effect (reported as %CV of LQC and HQC) was 5.42% (HQC) and 5.14% (LQC) for Ergocalciferol. The % mean accuracy of matrix effect samples was 109.34% for LQC samples and 106.48% for HQC samples. These within acceptance criteria results show that ionic enhancement or suppression due to matrix contents were not impacting on quantification of analyte. 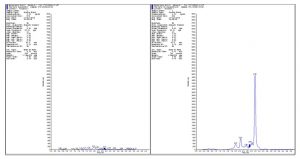 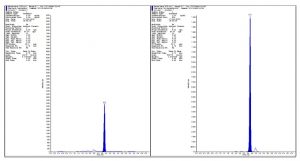 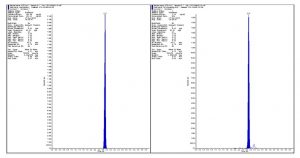 Linearity and Sensitivity: For the linearity range of 2.03 ng/mL and 150.63 ng/mL, the correlation coefficient (r) was found within acceptance criteria i.e., more than 0.99. Typical equations of calibration curves are as follows: y = a x + b, Where y represents peak area ratio for analyteInternal Standard and x represents concentration of the analyte.

TABLE 2: ACCURACY AND PRECISION OF ERGOCALCIFEROL IN HUMAN PLASMA (N=6)

This recovery data indicates that analyte and internal standard were consistently recovered from human plasma with this analytical method. The data of recovery is summarized in Table 3.

Stability and Other Parameters: Table 4 represents stability data and which shows that analyte was stable under stipulated handling conditions of sample.

Other validation parameters such as ruggedness, reinjection reproducibility, effect of Concomitant drugs, dilution integrity and Long Batch Performance which effect performance of method were found within acceptance criteria. USFDA guidelines 25 were taken as reference for acceptance criteria. Stability data in different stability conditions for Ergocalciferol has been provided in Table 4. 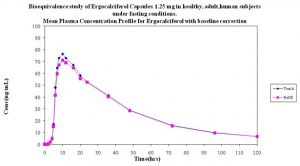 CONCLUSION: For the very first time a highly sensitive and selective method for the quantitative determination of ergocalciferol in human plasma was developed using HPLC-MS/MS with turbo-ion spray in positive ion mode. The method was validated as per USFDA guidelines and applied to subject sample analysis in Bioequivalence study. This method allows for a much higher sample throughput due to the shorter chromatographic run time (5.0 min) in comparison to all published literature till now. The method has been successfully used in a PK study of orally administered ergocalciferol capsules.